Ways Spinning Can Help You Reach Your Fitness Goals 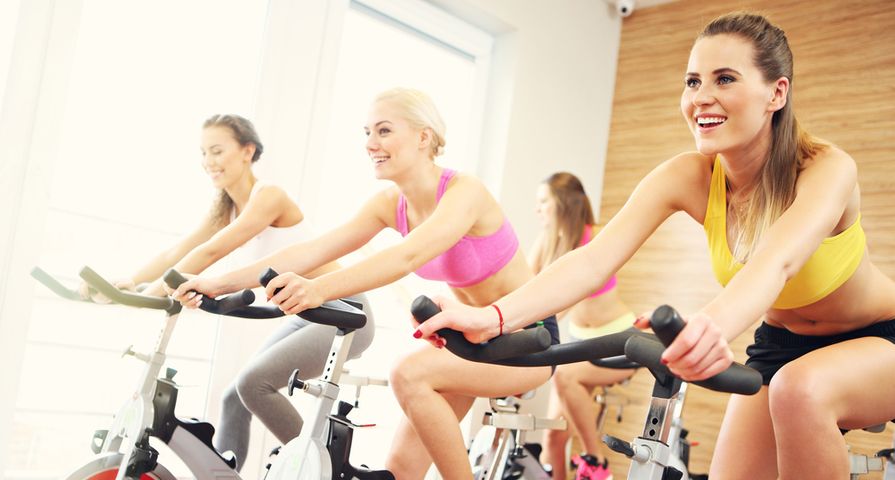 It’s no secret that spinning has taken the fitness world by storm in recent years, and for good reason: unlike many intense cardiovascular activities, like running or playing aggressive sports, most people can participate. That’s partly because, unlike running, it provides a fairly grueling and rewarding workout without placing too much pressure on sensitive parts of the human frame, such as the bones and joints.

But what, exactly, are the benefits of participating in spinning sessions, either in your own home gym or at the local athletic club? Why should a person choose this form of intense physical exercise over the many alternatives, including other relatively low-impact activities, like swimming? Let’s take a look at a number of reasons.

If you’re determined to burn calories in as little time possible, then you have a few options, starting with running in tough conditions, such as with weight on your back or up a hill. But that’s asking a lot of the average person.

Spinning may present the best option for someone who wants to rid themselves of calories and fat but wants to limit the impact on their body, particularly the bones and joints. Participating in a spin class will burn even more calories, as it results in competition between those involved. Ratcheting up the speed and resistance on the bike can only intensify this rivalry between participants, leading to a veritable avalanche of fat and calories. 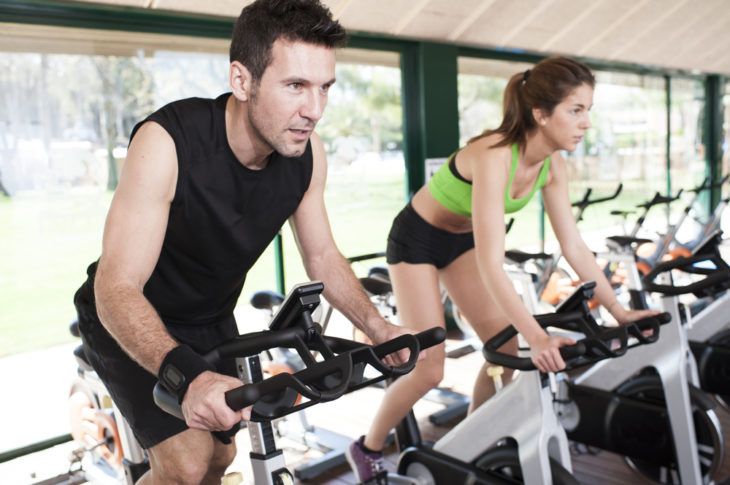 So, you want to prepare yourself for intense physical challenges, whether that’s biking the nearest steep hill or climbing Mount Everest. A good starting point may be spinning, which through customizable resistance and strength training and competition among participants can help build physical endurance at a startling rate.

As a cardiovascular activity, spinning is very capable of helping build your endurance, giving you the physical tools you require to conquer significant physical challenges. That isn’t to say a few spin classes will allow you to climb the world’s tallest mountains, but it can certainly play a role in strengthening the body parts which play critical roles in overcoming physical adversity. 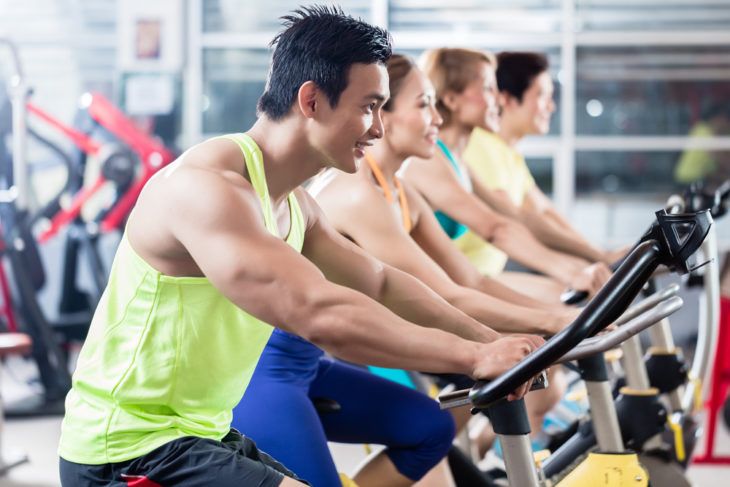 It’s pretty much impossible to cycle outside every day. Something is bound to come up, whether it’s lousy weather, nasty traffic, or problems with your bike and related equipment. For individuals who take their cycling seriously, and there a whole lot of them out there, that can be a problem as they strive to reach new heights and overcome higher obstacles.

That’s where spinning can be a huge help. Indoor cycling machines offer amateurs and professionals alike an opportunity to train hard and achieve their goals regardless of weather conditions or equipment status. And thanks to the growing popularity of spinning and spin classes, it’s rarely that hard to find something nearby. 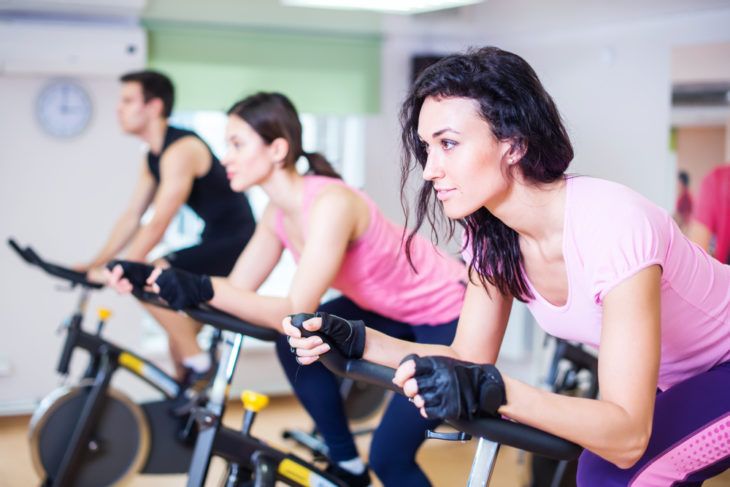 For many people, and especially the more competitive individuals among us, there’s no time for letting off the accelerator. Without constantly challenging themselves, they become bored, even depressed. These kinds of individuals simply need a physical activity that meets their desire for a personal goal.

That’s where spin class can be a huge help. By placing competitive individuals in a room together with equipment of the same level, they can challenge each other to push harder and go faster. In the end, all of those involved will have worked off the intensity of each other to achieve a satisfying workout capable of building their confidence and endurance. 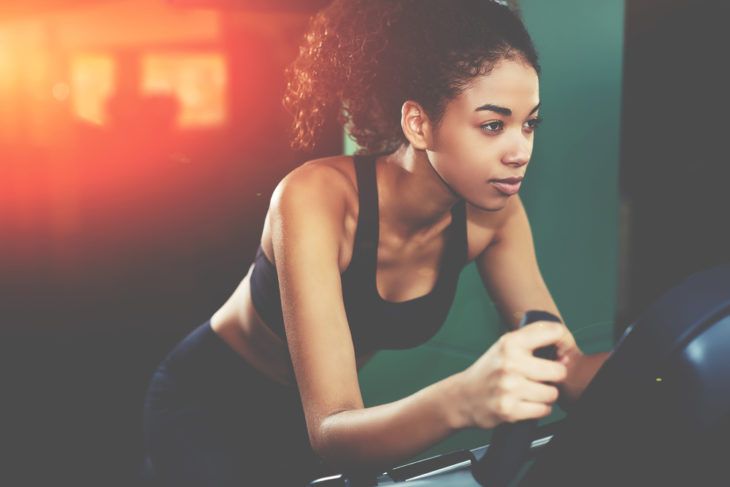 Those people who most enjoy team-based sports know that there’s something remarkable about supporting others and, in turn, receiving their support in the pursuit of a common goal. Knowing that others share your desire to overcome obstacles and achieve victory can be enough to push an individual to perform at the height of their abilities.

It’s a sensation some people may not feel when exercising or even competing on their own in individual pursuits like running, golf, tennis, etc. But spin class offers that kind of support, with many instructors challenging participants to push each other to new heights. It’s a key part of spinnings appeal and one reason many people now see it as their primary form of physical exercise. 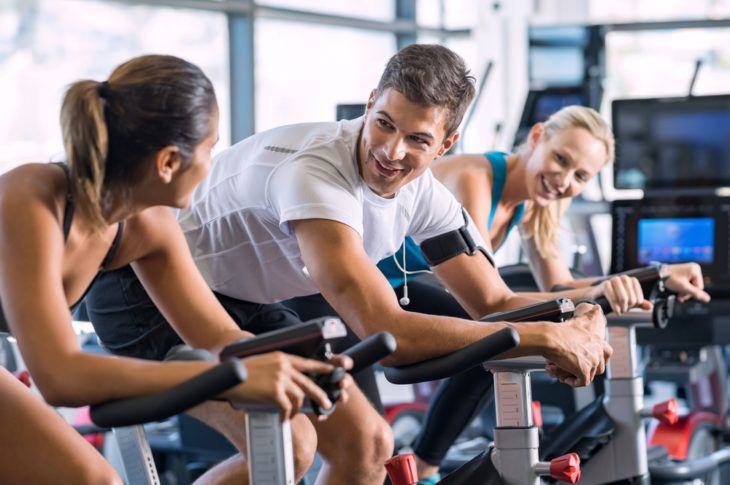 Intense cardiovascular activity like running, cycling, and playing intense physical sports — such as hockey, soccer, or rugby — can help improve heart health in a number of important ways. For one, these activities help burn fat and calories, thereby limiting the chances of developing high blood pressure, diabetes, and heart disease.

Second, regularly participating in these kinds of activities can help build the body’s endurance and the strength of major organs, including the heart and lungs. And that’s not just helpful for someone who has a physical profession or plays a sport at an elite level: even for regular people, it can help give them the tools they need to be physical if the demand arises. 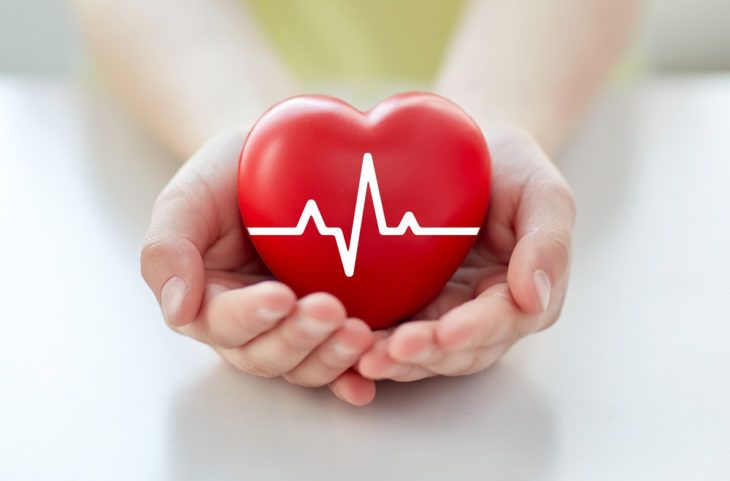 Go at Your Own Pace

Although spinning offers a great way to challenge yourself and those around you to reach new heights in your physical abilities and overall endurance, there’s certainly no requirement to push yourself until you vomit.

In fact, the truly great spin class instructors will encourage participants to do what’s best for them, and for many people that will mean setting their own pace. This can mean matching classmates at intervals and then returning to a more reasonable pace after a set period. It’s a wise plan, particularly as it’s highly unlikely that everyone engaged in a spin activity will be on the exact same level in terms of their training and capabilities. 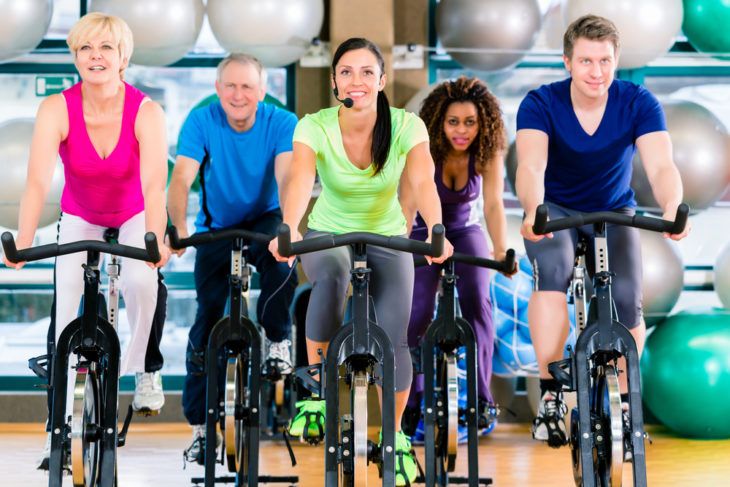 Depending on where you live, cycling outside can be a dangerous pursuit. In urban environments, cyclists too often find themselves fighting with automobiles for room on roadways, an issue that far too frequently results in serious injuries and even death. Outside of the city this danger is less obvious, but it’s still there, particularly as many drivers on country roads aren’t used to seeing cyclists and may not know as much about how to give them the space they need to stay safe.

You can take virtually all of that danger and throw it out the window by choosing to do your cycling inside through spinning. Fast-moving vehicles won’t came anywhere near a spin class, which will allow the cyclist to focus on what counts: putting their bodies in motion in order to burn calories and fat and improve their overall physical health. 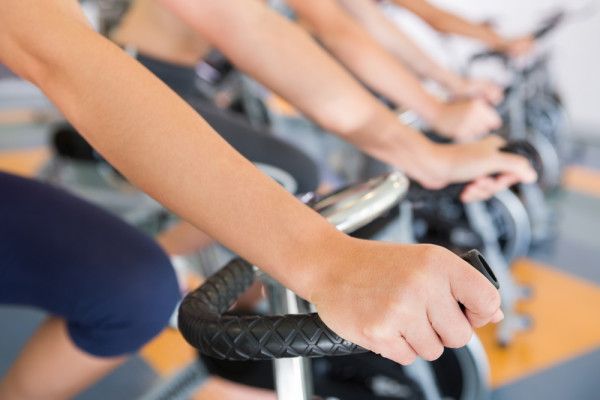 Learn From Your Instructor

Few of us get to participate in physical activities with experts in the field. Chances are your solitary bike ride through the countryside won’t involve you meeting up with a champion cyclist who can offer feedback on your form and equipment.

But with spinning, you can learn a lot from an experienced instructor. They can work with you to learn your ability level and discuss how you can take your performance to the next stage. With such feedback, you can make both significant and incremental changes to your form and routine in order to build your physical endurance, improve your overall health, and become a better cyclist. 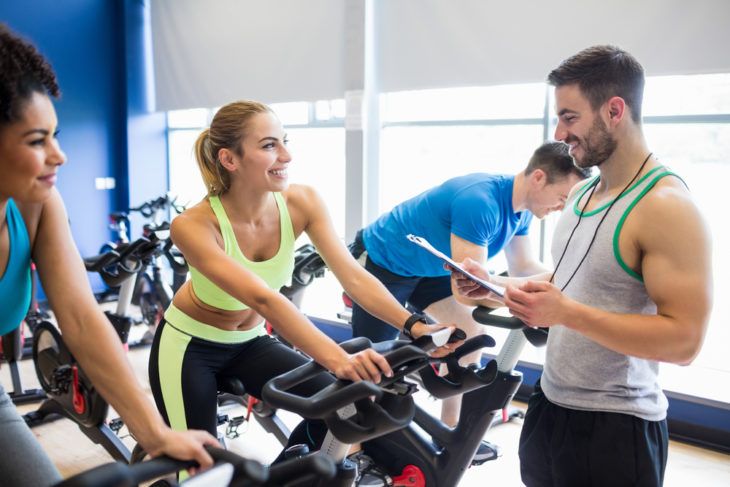 As with many other classes, spin class offers participants the opportunity to socialize with others. That’s helpful for a number of important reasons: for one, it gives the participant the feeling that they’re a member of a small community that will support them through adversity. In time, that support could bloom to include more than just getting through a tough class to include discussing matters both personal and professional.

Second, such socialization can be excellent for the mental health of a participant who may not get the opportunity to talk to others of similar interests in their personal or professional lives. Take the remote worker or individual working independently: if they don’t have a partner or large social network, participating in a spin class could offer them a rare opportunity to chat with others. 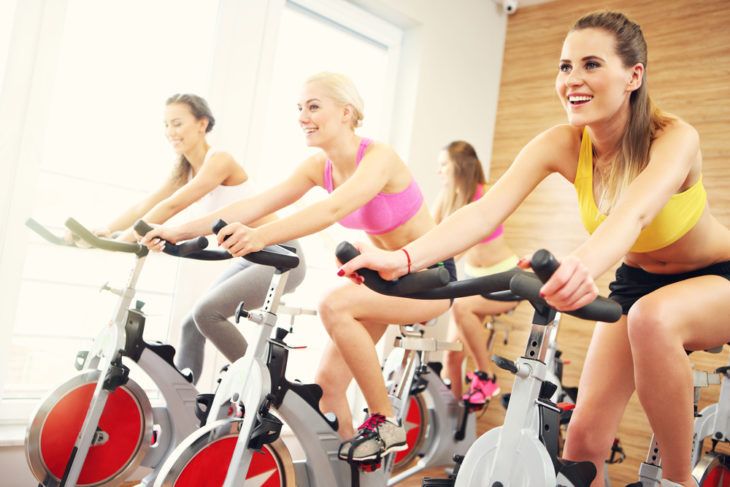 Although spinning can provide an effective cardiovascular workout that burns calories and fat at an impressive rate, the primary actors in this exercise are the legs. To some extent that sets spinning apart from other intense physical workouts, including running and swimming, which require some action in the upper part of the body.

For anyone recovering from a significant upper body injury — like a broken arm or collarbone or a pulled chest muscle — this means they may be able to continue getting physical exercise. That’s crucial for anyone who doesn’t want to fall behind in reaching their fitness goals after sustaining an upper body injury. 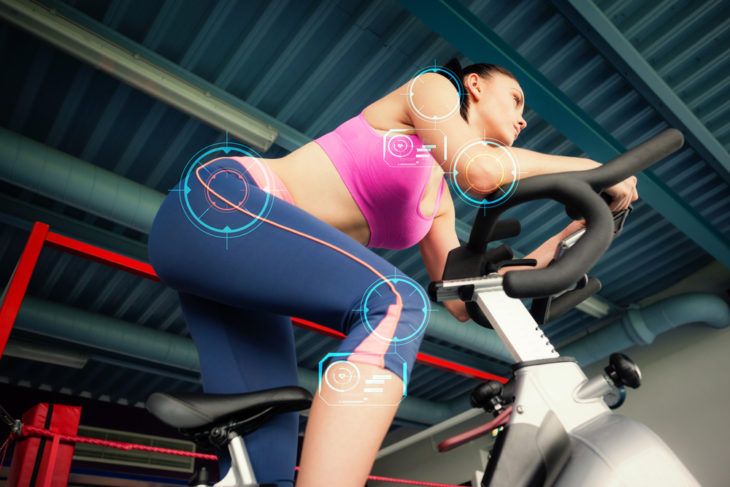 By burning calories and fat and a rapid rate, spinning can help to both build lean muscle and improve muscle definition in the calves, thighs, and core.

That’s helpful for two reasons: first, lean muscle plays an important role in boosting the body’s metabolism, helping an individual burn calories even while at rest. A person who fails to build lean muscle is more likely to put weight back on. Second, building definition provides the individual with visible evidence that they’re making progress, a key part of keeping spirits up and maintaining mental momentum and motivation. 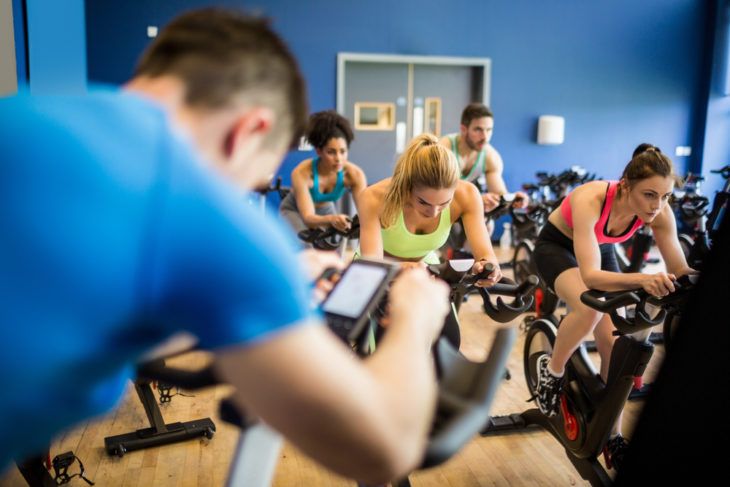