The Incredible Health Benefits of Walnuts 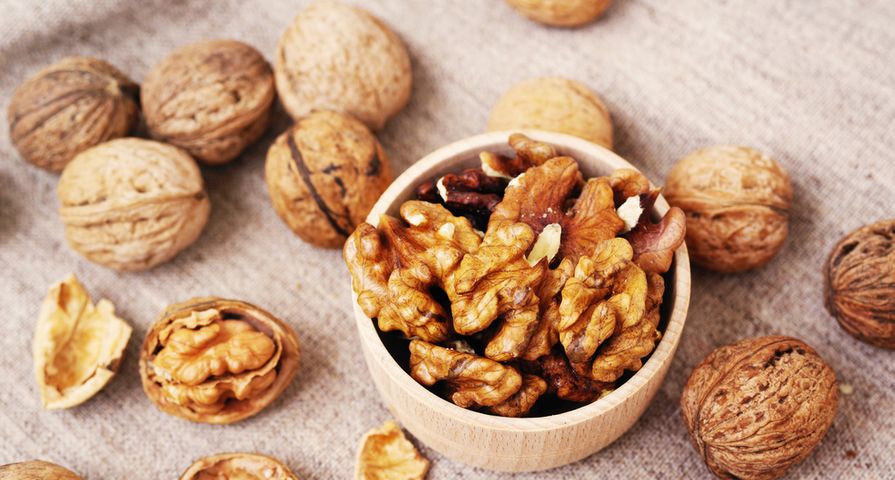 Nuts are one of those foods that we’re not sure what to do with because while we know most of them are healthy for us (unsalted, of course), we are also frequently told they are high in fat and shouldn’t be consumed too heavily. Even though many nuts are high in fat and calories, they’re also full of vitamins, minerals, dietary fiber, and protein. In a world where vegan and vegetarianism is becoming more and more popular, they’re a great go-to dairy-free and gluten-free snack. There are so many nuts available to us and they’re cultivated around the world, so how do we know which ones to eat? Well, we’ve got the answer to that!

Even though walnuts are one tough nut to crack, they’re among the best nuts to eat and luckily, they’re easily accessible and affordable. Let’s take a look at some of the incredible health benefits of walnuts…

Inflammation is often caused by oxidative stress, says Healthline, and plays a big role in many diseases like diabetes, Alzheimer’s, heart disease, and cancer. Luckily, the polyphenols in walnuts can help reduce this inflammation and oxidative stress. “A subgroup of polyphenols called ellagitannins may be especially involved. Beneficial bacteria in your gut convert ellagitannins to compounds called urolithins, which have been found to protect against inflammation,” writes Healthline.

Eat This, Not That! found research on animals that shows walnuts could help in the fight against certain cancers like prostate, breast, and colorectal. One study in particular found smaller and slower-growing prostate tumors in mice who were given the human equivalent of 2.4-ounces of whole nuts for 18-weeks, as opposed to those who were given the same amount of fat from other sources. The results found that walnuts reduced prostate cancer growth by 30- to 40-percent. A different mice study found that the equivalent of two handfuls of walnuts a day reduced the risk of breast cancer by 50-percent.

According to Healthline, the cancer fighting properties in walnuts might be due to the fact that they contain polyphenol ellagitannins which can be converted by some gut microbes into compounds called urolithins. “Urolithins can have anti-inflammatory properties in your gut, which may be one way that eating walnuts helps protect against colorectal cancer. Urolithins’ anti-inflammatory actions could also help protect against other cancers,” writes the source. In addition to that, urolithins are able to block hormone receptors the body which could reduce the risk of hormone-related cancers like breast and prostate.

Walnuts are among the best nuts a person can eat because they have high amounts of omega-3 essential fatty acids which work to improve heart health and lower blood pressure. WebMD points out that a single ounce of walnuts contains 2.5-grams of omega-3 essential fatty acids. You don’t need to eat an ounce of walnuts a day though — just a few will suffice.

According to Healthline, walnuts have been known to lower cholesterol levels which in turn reduces a person’s risk for heart disease. A 2018 study published in the American Journal of Clinical Nutrition and previous analysis by the same researchers found that a diet rich with walnuts could help lower cholesterol, triglycerides, and apoprotein B.

A lot of people struggle with sleep. It doesn’t take much to throw someone’s sleep schedule off tilt it can be affected by stress, caffeine, exercise or even too much sleep the night before. Not to worry, a little boost of melatonin should do the trick! If you’re not a big fan of taking melatonin supplements, you can find it naturally in some foods like walnuts.

Typically our bodies make melatonin on their own. It’s what sends messages to our brain to let us know when it’s time to sleep, but when we need a little extra help in that department, walnuts can help boost our blood levels of melatonin and induce sleep naturally.

Healthline cites a PREDIMED study of 7,500 adults who were at risk of heart disease ate a Mediterranean diet which included a daily dose of mixed nuts (half of which were walnuts) and found their diastolic blood pressure had greatly reduced. As a result, this suggests walnuts can have a positive effect on lowering blood pressure which can also lower the risk of heart disease.

An unhealthy diet can have a lot of negative effects on a person’s healthy, even their fertility! Eating lots of processed foods, refined grains, or sugar has been shown to negatively affect sperm function in men, says Healthline, but eating walnuts can help support sperm health which in turn supports male fertility.

A study of 117 men found that after eating 2.5-ounces of walnuts every day for three months in addition to their regular Western diet their sperm improved in terms of shape, vitality and mobility. Healthline also notes that some animal research shows that eating walnuts could “help protect sperm by reducing oxidative damage in their membranes,” but further research on those details is needed.

This one might seem a little ironic because the inside of a walnut tends to look a little like a brain, but we assure you, that’s strictly a coincidence! What’s more important is that the nutrients in walnuts have been shown to actually improve brain function. More specifically, the polyunsaturated fat, polyphenols, and vitamin E. MindBodyGreen backs this claim up with a study conducted by the Institute for Basic Research in Developmental Disabilities in New York back in 2014 which found that walnuts can have a positive effect on brain function by improving memory and learning skills. According to the findings, walnuts could also reduce the risk or slow the progression of Alzheimer’s disease.

Healthline also references a 10-month study where mice were fed the human equivalent of 1- to 1.5-ounces of walnuts per day and showed great improvements in their learning skills, memory, and anxiety reduction in comparison to a group that weren’t fed any walnuts. The same source also notes that other human studies in older adults “have linked eating walnuts to better brain function, including faster processing speed, more mental flexibility and better memory.”

One of the best things for digestion and keeping the body regular is dietary fiber. A lot of people struggle with eating fiber which is what causes constipation and in some cases, hemorrhoids (which are also quite common). Luckily, there are lots of foods that are rich in fiber and walnuts are one of them! All humans require fiber on a daily basis to keep their bowels functioning correctly.

Usually, the common sources of protein, such as meat and dairy products, lack fiber. Having walnuts daily can help you with digestive problems and keep your bowels functioning properly,” writes StyleCraze.

Aging is something that is inevitable, but there’s no harm in trying to put it off! Most people do little things to protect their skin from aging, whether it’s using skincare products, cosmetic procedures, wearing sunscreen every day, or even just a hat in the sun! All of these things will work to protect the skin from aging. But what many people might not realize is their diet can affect their skin as well.

Walnuts are a food that can prolong aging because they’re full of vitamin B which is good for managing stress and mood. “Increased stress levels can result in the earlier onset of wrinkles, thus inducing faster aging. The presence of the B vitamins, together with Vitamin E, a natural antioxidant, helps in fighting the free radicals induced due to stress. This further delays the aging process,” writes StyleCraze.

Walnuts are special for diabetics because they have a somewhat limited diet, but walnuts are one of the few foods they can safely eat on a daily basis without risking their blood sugar levels. These nuts are also linked to a lower risk for type 2 diabetes, but that’s mainly because they can help control weight (we’ll get to that next), and excess weight increases the risk of high blood sugar and diabetes.

A study of 100 people with type 2 diabetes had the individuals consume 1-tablespoon of cold-pressed walnut oil each day for 3-months “while continuing their usual diabetes medication and balanced diet,” and found “an 8-percent decrease in fasting blood sugar.” The results also showed that the users had an 8-percent decrease in hemoglobin A1C whereas the controlled group had no improvement.

We’ve previously mentioned that walnuts and nuts in general tend to be high in fat, so you’d think that they aren’t necessarily something a person wants to eat in order to lose weight. While it’s true, you wouldn’t want to eat lots of walnuts every day because they have lots of calories, but it’s actually beneficial to eat a small amount every day. Walnuts are mostly great for weight loss because they are fulfilling and can help control appetite.

Healthline cites a study of 10 obese people who drank a smoothie that contained 1.75-ounces of walnuts once a day for five days in a row. The results showed that they had successfully decreased their hunger and appetite compared to those who had a placebo drink with equal calories and nutrients. Afterwards the individuals who consumed walnuts on a daily basis showed “increased activation in a region of the brain that helped them resist highly tempting food cues, such as cake and French fries.”

Good for the Gut

Most people don’t realize that the gut has a lot to do with overall health. We also don’t usually think of bacteria as a good thing, but when it comes to the gut, a good balance of health-promoting bacteria and other microbes (gut microbiota) are what keep the gut healthy. Healthline explains that an unhealthy gut can cause “inflammation and disease in your gut and elsewhere in your body, increasing your risk of obesity, heart disease, and cancer.” Not surprisingly, the food that we eat can have a huge effect on our gut bacteria balance.

Walnuts have been shown to actually improve gut bacteria. Healthline cites a study that looked at 194 adults who ate 1.5-ounces of walnuts every day for eight weeks and found that their beneficial bacteria increased, more than it did in the period of time when they weren’t eating walnuts. “This included an increase in bacteria that produce butyrate, a fat that nourishes your gut and promotes gut health,” writes Healthline.