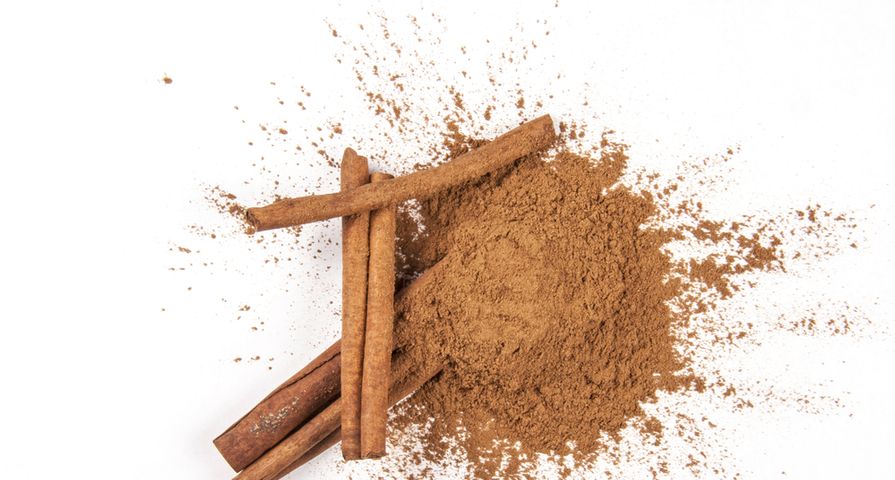 Cinnamon is a spice that we typically associate with dessert because it’s so delicious! It can be used as a topping for hot drinks like lattes and cappuccino, desserts, or as a baking ingredient. It’s typically used during the fall and winter seasons to create holiday-themed treats, but we’re beginning to learn it’s something we should probably consume more often.

Made from the inner bark of cinnamomum trees which are typically found in India, Sri Lanka, Brazil, Indonesia, Vietnam, and Egypt. It can be enjoyed in stick form, as a powder, pre-ground, or even in essential oils. You wouldn’t think that something so tasty could also be really healthy, but it actually is.

We’re taking a look at some of the incredible health benefits of cinnamon, check it out…

Heart disease is one of the biggest causes of premature death. The Heart and Stroke Foundation defines it as a group of conditions that affect the function of the heart. These conditions can usually be avoided through healthy lifestyle habits like eating healthy foods, including cinnamon. According to Healthline, cinnamon has been shown to reduce LDL “bad” cholesterol levels and triglycerides while maintaining levels of “good” HDL cholesterol levels. The source cites a study which found that all it takes to reap these benefits is a 120-mg dose of cinnamon each day. Other studies have found that cinnamon can also lower blood pressure.

Health.com also suggests that cinnamon is good for our heart because of a study conducted at Penn State which found that spices like cinnamon and turmeric can help curb “negative effects of downing a fatty meal.” When we eat foods that are high in fat, it causes our triglycerides to rise which raises the risk of heart disease. The study was small, but the results showed that people who consumed about tablespoons of cinnamon along with their fatty meal had a 13-percent increase in blood antioxidant levels and a 30-percent reduction in triglycerides.

Cinnamon has been known to promote younger-looking skin by fighting off wrinkles and age spots. Good Housekeeping references a 2013 study where cinnamon extract “significantly promotes type I collagen biosynthesis within dermal fibroblasts.” The source also offers a great DIY paste mask to try!

In addition to keeping skin looking young and healthy, cinnamon also helps clear acne. This spice contains bioactive phytochemicals that have been shown in a 2015 review of studies to clear breakouts. Good Housekeeping gives a step by step instruction on how to create a pimple fighting mask. Start by “combining 2-teaspoons of raw, organic honey, and a sprinkle of cinnamon. Apply to your face for about 10 minutes and then rinse gently with a washcloth and warm water.”

Another major benefit of the antioxidants in this savoury spice are that they work to reduce inflammation. This has all kinds of beneficial side effects like lowering the risk of heart disease, cancer, and cognitive decline, says Dr. Axe. There are several different types of flavonoids in cinnamon which all work to fight off dangerous inflammation levels in the body.

“Because cinnamon lowers swelling and prevents inflammation, it can also be beneficial in pain management, with studies showing that cinnamon helps to reduce muscle soreness, decrease menstrual pain, lessen the severity of allergic reactions and help relieve other age-related symptoms of pain as well,” writes Dr. Axe.

Good for the Heart

We’ve already talked about how cinnamon can reduce the risk of heart disease by lowering bad cholesterol levels and triglycerides, and we’ve got two more hearty reasons to add to the list! First up, studies have also shown that cinnamon can help reduce blood pressure which keeps the heart nice and strong. High blood pressure is another risk factor for heart disease.

Secondly, research has shown that cinnamon is a natural coagulant which means it helps form blood clots whenever there is excessive bleeding. “Cinnamon also increases circulation and improves tissue repair, which may be especially helpful for regenerating heart tissue in order to help fight heart attacks, heart disease and stroke,” says Dr. Axe.

May Fight Against Neurodegenerative Diseases

Neurodegenerative diseases like Alzheimer’s and Parkinson’s disease can rob a person of their life and be extremely painful for their loved ones to witness. These diseases cause progressive loss “of the structure or brain cells,” says Healthline, but two of the compounds in cinnamon could help protect humans from the effects of these diseases by stopping the buildup of the protein known as tau in the brain. This is super important because tau is one of the hallmarks of Alzheimer’s. Healthline refers to a study in mice which found that cinnamon can help “protect neurons, normalized neurotransmitter levels and improved motor function.” More research in humans is needed, but this is a great place to start!

In addition to protecting against neurodegenerative diseases, Health.com says that cinnamon can be used to boost brain function in general. A study conducted at the Wheeling Jesuit University had participants perform computer-based tasks while chewing gum of different flavors including cinnamon, peppermint, and jasmine. “Cognitive processing was boosted the most in those given cinnamon, which sped up visual-motor responses and improved attention scores.” The source cites another study from the Agricultural Research Service which found that cinnamon can prevent brain cells from swelling “in the ways typically seen after a traumatic brain injury of stroke.”

Cancer is a scary thing, mainly because it seems to be so prevalent. It’s becoming increasingly hard to find someone who hasn’t been affected by cancer, or know someone who has. Cinnamon can be used to stop uncharacterized cell growth, says Healthline. There have been many studies looking at the cancer-fighting benefits of cinnamon, most of which are limited to test tube and animal studies.

According to Healthline, cinnamon “acts by reducing the growth of cancer cells and the formation of blood vessels in tumors and appears to be toxic to cancer cells, causing cell death.” The source cites a study in mice that found cinnamon to be a “potent activator of detoxifying enzymes in the colon,” and stopping further growth of the cancer. Other studies performed with test tubes were able to generate similar findings were cinnamon “activates protective antioxidant responses in human colon cells.” Further testing in humans is needed, but the results are promising so far.

It can be hard to find foods that don’t raise blood sugar levels because sugar is in so many of the foods we eat on a daily basis. However, cinnamon is one that not only doesn’t raise blood sugar levels, but has blood-sugar-lowering properties. Healthline notes that in addition to promoting insulin resistance, cinnamon “has been shown to decrease the amount of glucose that enters your bloodstream after a meal. It does this by interfering with numerous digestive enzymes, which slows the breakdown of carbohydrates in your digestive tract.” It can also mimic the hormone our pancreas produces that regulates glucose levels.

There have also been studies that have shown cinnamon is beneficial for diabetics because it can lower fasting blood sugar levels by 10 to 29-percent. All it takes is a less than a teaspoon a day.

Easy Ways to Stay Healthy and Active During Fall

Part of keeping our body healthy is protecting it from infections like bacterial or fungal. Luckily, cinnamon contains cinnamaldehyde which has been shown to help fight infections, says Healthline. It also contains “natural antimicrobial, antibiotic, antifungal and antiviral properties” that help defend the body against illnesses, notes Dr. Axe. Cinnamon can also be made into an essential oil which promotes immune boosting benefits.

Fighting a fungal infection? Try cinnamon oil. “Cinnamon oil has been shown to effectively treat respiratory infections caused by fungi. It can also inhibit the growth of certain bacteria, including Listeria and Salmonella,” writes the source. It’s important to note that the evidence to back this up is quite limited, so more research is needed.

Not only does it taste good, it’s good for our digestive health! The anti-fungal properties in cinnamon that we previously talked about are what help prevent Candida overgrowth in the digestive tract. “Cinnamon has been shown to lower amounts of dangerous Candida albicans, which is the yeast that causes Candida overgrowth and can cause a host of digestive autoimmune issues,” writes Dr. Axe.

In addition to the antifungal properties, the source notes that cinnamon can help lower blood sugar levels which can also encourage healthy digestion. “A diet high in refined carbs can increase the amount of sugar in the digestive tract and may be associated with na increased risk of Candida.”

White Wine vs. Red Wine: Which Is Healthier?

You’ve probably never considered eating more cinnamon to promote oral hygiene, but research shows this spice can be used to fight against strains of bacteria that cause bad breath, tooth decay, cavities, and mouth infections, says Dr. Axe. The essential oils from cinnamon contain antibacterial properties that are so strong they act as a natural mouthwash.

There’s a reason that cinnamon is a common flavor among chewing gums. It’s not just because it smells good! It is also “because it removes oral bacteria, cinnamon has the ability to fight bad breath without adding any chemicals to the body. Because of this, cinnamon has also been traditionally used as tooth powder and a natural remedy for toothaches, dental problems and mouth sores,” explains Dr. Axe.

Like most foods that are good for us, cinnamon is loaded with antioxidants that protect our body from free radical damage.Dr. Axe states that cinnamon ranks as no. 7 on the ORAC scale which measures antioxidant concentration in all foods, herbs and spices. That’s pretty darn good! A study published in the Journal of Agricultural and Food Chemistry, cinnamon also won as the healthiest antioxidant against 26 other spices, including garlic, thyme, rosemary, and oregano.

The best antioxidant that cinnamon contains is polyphenols, but it also has phenolic acid and flavonoids. All of these antioxidants work to fight oxidative stress and reduce the risk of chronic disease. “The different antioxidants present in cinnamon help to neutralize harmful free radicals in the body and prevent oxidative stress. It can also help limit nitric oxide build-up in the blood and prevent fat peroxidation, both of which can increase the risk of brain disorders, cancer, heart disease and other chronic conditions,” writes Dr. Axe.