Get Salty About These Sodium-Filled Foods 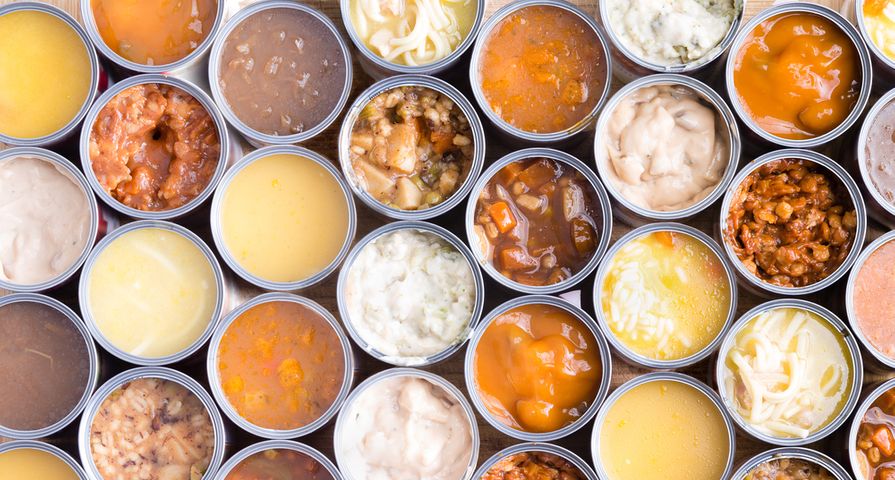 We all need salt to function properly, but the problem is most foods have added sodium—lots of it—that can increase the risk of heart problems. TIME magazine says that 90-percent of Americans consume too much salt, and another problem is that many people may not realize just how much salt is in their favorite meals and snacks.

Even if the food doesn’t taste salty, it doesn’t mean it’s not loaded with it. In fact, some solitary meals can account for more than the 2,300-milligrams of salt that’s generally accepted as the maximum per day. Here are eight of the culprits to watch out for…

Men’s Health says that even the innocent bagel can be a huge source of sodium, and it points to one option out there (we’ll say it’s from a popular donut chain, but to be fair the bagel has salt right in its name) that contains around 3,500-milligrams alone.

The source says if you insist on starting your day with a bagel, you should consider a store-bought onion bagel, as it has a more reasonable 380-milligrams of salt. Be sure to check the sodium content on loaves of bread too, as salt count can be particularly high on some brands (don’t think brown bread is always the healthiest).

Those quick and convenient meats you throw into your lunch sandwich can contain a secret stash of salt. While deli meat contains much-needed protein, “A simple luncheon meat sandwich may actually push your sodium intake for the day into levels raising your risk for heart disease and other health problems,” notes LiveStrong.

If you think you’re skipping the salt by skipping the solid meals, then you’re probably wrong. Unless you’re making your own soup from scratch and controlling the salt content, you could be taking in a lot of it from store and restaurant varieties.

Without naming particular brands, one popular manufacturer of soup contains up to 1,800-milligrams of sodium per can. Even the “reduced salt” versions can pack a huge amount of salt, according to Pritikin Longevity Centre in Miami. Always check the labels if you’re salt-conscious, it adds (ideally, you should look for soups that don’t have more milligrams of sodium than calories per serving).

According to WebMD, some canned or bottled pasta sauces from the store can contain more than 600-milligrams of sodium per 0.5-cups. So even though you think you’re getting a low-salt meal because pasta typically contains next to none, you could be fooled.

Although it’s not as convenient, the source recommends making your own pasta sauce using a blender and vine-ripened tomatoes. You can add other ingredients (other than salt) for flavor, such as onions, garlic, black pepper and olive oil. You’ll still get about 160-milligrams per serving, but that’s a big improvement.

Another favorite around the dinner table, pizza can really pack a salty punch, according to NYDailyNews.com. The combination of “sneaky” salt in the dough, to the sauce, to the cured meat toppings can really add up.

The answer is to try and avoid meat toppings like pepperoni and ham, and go for more veggie options (also try to hold off on extra cheese, because cheese itself is a large source of sodium), offers the source. You could also try making your own pizza if you fancy tossing dough into the air.

Generally considered healthy because it’s a low-fat meat option, chicken can actually contain quite a bit of salt, according to Men’s Health. The kicker is the broth contained in some raw chicken packages from the store, notes the source.

It suggests looking on the label for “broth solution” content, as the broth can contain 60-milligrams or more of salt per chicken breast. Go broth-free. Deli varieties of chicken breast can be especially high in salt as well, so beware.

This one is probably no surprise to anyone, especially the fast-food varieties. However, they can be so loaded with salt that we’d be doing a disservice by not mentioning them. One particular cheeseburger from a popular fast food chain that’s piled with cheese and bacon has a staggering 2,860-milligrams of sodium, notes Health.com. And that’s without the fries or soda.

Fast food in general is going to deliver a lot of salt, from burgers to sandwiches to meaty burritos (one of the latter items from another chain has 2,650-milligrams of sodium). While there’s nothing wrong with grabbing food to go once in a while, you shouldn’t make it a regular habit or you could really push the health risks.

LiveStrong says snacking is important to help deliver maximum nutrients and energy throughout the day, but you have to be careful the health hazards don’t outweigh the benefits. These are two of the most popular snack choices in the U.S., so we grouped them together for comparison.

While pretzels are lower than chips in calories, and contain more iron and folic acid, according to the source, potato chips actually have the edge if you’re watching your salt intake. A “portion” of pretzels has more than 650-milligrams of sodium, while potato chips (we’ll assume it’s the same volume) contain 255-milligrams of sodium. It doesn’t specify what flavor of chips, so “salt and vinegar” flavor could have more. In fact, one brand of salt and vinegar chips we looked up contains 358-milligrams per 45-gram serving.