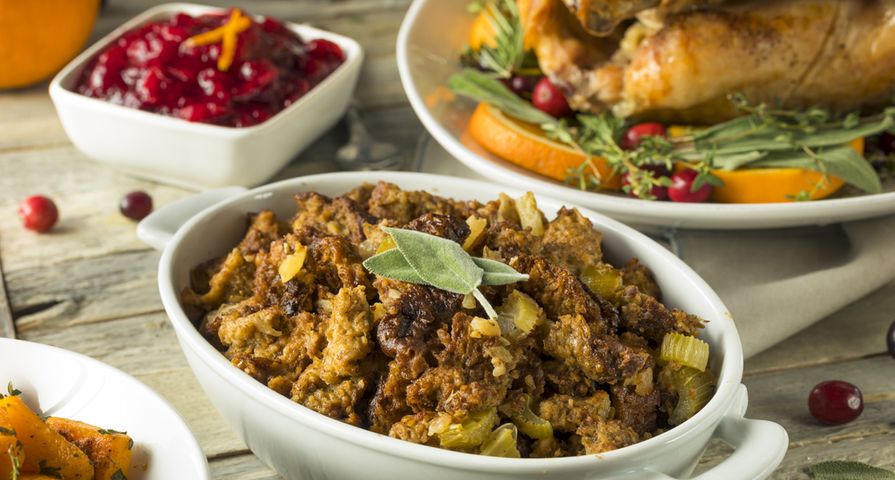 Thanksgiving is fast approaching and you probably already have visions of turkeys, stuffing and gravy dancing through your head. Maybe you’re also thinking about how many calories are involved in such a feast, or how bloated you might feel after (remember to take your time with each bite to savor the flavor, and don’t overdo portions).

It’s still possible to eat like a king on Thanksgiving, while shedding some calories, fat and salt from the menu. In many cases, you can keep the staples in there (like the turkey) and just add a healthier twist. Here are six healthy Thanksgiving food ideas that will have your guests rubbing their tummies in anticipation…

Hop Off the Gravy Train

This doesn’t mean you have to avoid gravy – we’re not crazy – but there may be a healthier way to get your fill without all of the bad stuff, suggests AllRecipes.com. ” “Gravy is one of the biggest calorie culprits on the table,” notes the source.

Instead of using turkey drippings, try using vegetable oil instead, it says. “It’s still fat, but oil is lower in saturated fat and is cholesterol-free,” it adds. If you insist on using turkey drippings for more flavor, you should use a fat separator – pour the gravy into the separator, allowing a few minutes for the fat to rise to the surface. Then you can easily skim it off.

RealSimple.com explains that turkey itself is relatively low in calories, but only if you stick with skinless white meat (consider buying turkey breast only, rather than a whole bird with dark meat).

While a regular recommended serving of turkey is about 3-ounces, it’s okay to push this boundary a bit with the skinless turkey, it adds. Instead of eating the equivalent of a deck of cards in turkey, go for closer to 2-decks, it suggests.

Stuffing is the stuff of nice dreams, and it’s a mainstay on most people’s Thanksgiving plates. However, there are alternatives to the traditional bread stuffing that will leave you feeling stuffed and your taste buds satisfied, explains TheKitchn.com.

These 5-gluten free alternatives from the source include wild rice (which goes well with dried fruits), sticky rice, quinoa, oatmeal, or a gluten-free cornbread version of stuffing. It even shares a recipe from Silvana Nardone for a gluten-free apple-pecan cornbread stuffing that looks devine.

Give Butter a Day Off

AllRecipes.com said you could shave some carbs from your mashed potatoes by using the starchy water left over from boiling potatoes, instead of loading them up with butter and cream. “The starchy water will give the potatoes a creamier texture than plain water would,” it notes.

It notes you can also add turkey or chicken broth, evaporated skim milk, or fat-free sour cream, and you can stir in roasted garlic and herbs for an extra flavor boost. Consider adding pureed cauliflower (or parsnips or turnips) into the potatoes for a nutritional gain, it adds.

Sure, most people like some wine with their dinner, as well as maybe some cocktails and beer before and after. But we probably don’t have to tell you how much sugar comes from alcohol, as well as carbs (hint: it’s a lot).

What? No pumpkin pie, you ask? It’s going to be okay. That’s because EveryDay Health lists 9-alternatives to Thanksgiving pie that might have you begging for seconds.

Examples include gingered cranberry-pear cobbler (so you get your extra dose of cranberries), oatmeal-nut crunch apple pie, country pear tarts, and even double-chocolate brownies using fat-free cocoa powder. Oh, and if you refuse to give up your pumpkin pie, you can choose a pumpkin-maple pie that “takes advantage of the natural sweetness of maple syrup and adds fat-free evaporated milk for richness.” It has 100-less calories and 8-less grams of fat per serving than traditional pumpkin pie, it adds.