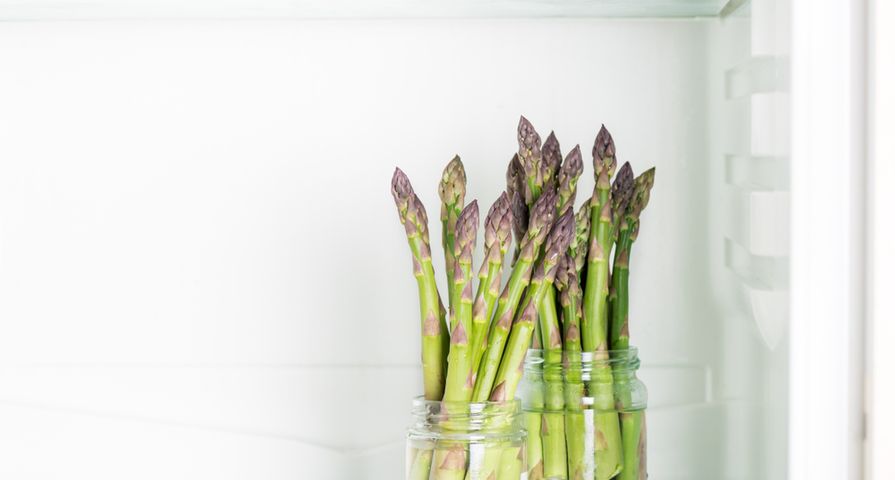 Have you ever opened up the crisper drawer of your refrigerator only to find a bunch of limp, lifeless vegetables? Or maybe even worse…something so far gone it’s virtually unrecognizable?

We’ve all been there, in fact the average American throws away approximately 20 pounds of food each month according to a recent report from the United Nations Environment Programme. That amounts to about 30 to 40-percent of the U.S. food supply going to waste, and the second highest component in landfills is actually organic waste.

When you think about the amount of money that’s wasted as a result, things get even scarier. But before you start feeling shame, cheer up because there are several ways you can avoid the dreaded food spoilage with some crafty food storage tips…

While they may look tough, potatoes don’t respond well to extreme conditions. They’re sensitive to light and they don’t like it too hot or too cold. We can’t tell you how many times we’ve reached for our spuds only to find a sprouting colony of potato plants. This can be a big concern for those of us who don’t eat potatoes more than once a week or so.

To avoid sprouting and accelerated spoilage, keep your spuds in a dark place, away from hot or cold conditions. Also, many people store their onions and potatoes together which is a big mistake! While they both like dark conditions, they each give off gases and moisture that will cause the other to spoil much faster so keep these two well apart!

Most refrigerators have a convenient little egg tray or storage box built right into the door, and while this may seem like a perfect place to store your eggs, this will actually cause them to spoil faster.

Eggs should be kept in the lower back part of your fridge where it’s coldest and they are away from the light (there’s a reason they come in opaque cardboard containers.) Storing your eggs in the door exposes them to temperature fluctuations which can lead to a decrease of quality and breakdown of the eggs wonderful nutrients.

While refined white flour may do alright in your kitchen pantry, the same cannot be said for whole grain and alternative flours like spelt, coconut, millet, and rye. The biggest enemies of these types of flours are heat, moisture, and air and they can take a perfectly good flour and send it to the garbage bin pretty quickly.

Baking and cooking with alternative flours can be expensive so save your money from going to waste by storing whole grain and alternative flours in airtight containers in your freezer. If no freezer space is available, the fridge is your next best bet. You’ll know if your flour has gone off if it has a musty or oily smell.

If you’re one of the many households who keep their tomatoes in the fridge, thinking it will keep them fresher for longer, you’ll be shocked to know you’re ruining your tomatoes! So close that refrigerator door because cold temperatures will actually destroy the flavour of tomatoes and prevent them from ripening to their peak of perfection.

The Florida Tomato Committee says “Tomatoes Taste Great When You Don’t Refrigerate” and recommends that they be kept on the counter at room temperature where they can fully ripen. They also say tomatoes should sit stem side up as being kept on their side will cause bruising which can lead to rotting.

Herbs can be especially tricky to keep from spoiling, especially when you buy a bunch of them, but only need a small amount at a time. Keeping them fresh all depends on the type of herb you’re working with.

Herbs such as chives, mint, oregano, dill, sage, and thyme can be kept in the fridge in a sealed plastic bag with a very lightly dampened paper towel. Basil, parsley, and coriander (aka cilantro) can be kept standing upright in a glass containing a couple centimeters of water. Wrap the leaves lightly with plastic wrap or a plastic bag secured with an elastic and keep the leaves out of the water or they will turn brown.

There’s nothing worse than opening up a container of berries only to find mushy, mouldy fruit. Especially since the cost of fresh berries can be extremely high depending on the time of year.

The best way to keep them from spoiling prematurely is to go through the container when you get them home and discard (or eat) any bruised or deteriorating fruit. Then place the unwashed fruit loosely in a shallow container and cover with a lid or plastic wrap. Wash your berries only right before eating as excess moisture in storage will speed up decay.

Garlic is a little more hardy than other types of produce but depending on how frequently you use it (and also how you store it) you may find that your cloves have started to sprout from their tops or they’re withered and dried out.

Garlic should be kept in a cool, dark place with good ventilation and before you reach for the refrigerator, stop, because the moisture will speed up mould growth. Instead, store your heads of garlic in a mesh bag in a cupboard or pantry, or invest in a neat little pottery garlic jar. These provide a dry, dark environment and have holes for ventilation. They also look pretty cute sitting on your counter.

Oils, especially healthy ones like avocado or extra virgin olive oil, can be extremely expensive to buy and they’re highly susceptible to food spoilage. This means extra care should be taken when storing your cooking oils to prevent wasting your hard-earned dollars. Spoilage prevention starts at the point of purchase so look for oils that come in dark glass bottles as opposed to clear ones. This is because most oils are very sensitive to light and also heat.

Store oils like avocado, flax seed, and nut oils in the fridge to avoid the fats from going rancid. Olive oil and coconut oil should be kept in a cool dark cabinet or pantry as keeping them in the fridge can risk condensation forming inside the bottles. These water droplets will alter the oils flavor and possibly ruin the whole product.

Another costly purchase that you’d rather not see go straight to the garbage bin are nuts. They’re high in natural fats and oils, which is great for some heart-healthy fats, but not so good for storage and longevity.

These oils can turn rancid rather quickly and will cause your nuts to take on a bitter and overly unpleasant flavor. To avoid this and prolong the life of your favourite nuts, store them in airtight containers in the refrigerator. The cold temperature is key to avoid the fats from spoiling thus increasing the storage life of your nutritious nuts.

Asparagus can be one of those tricky vegetables and many people are left wondering what they should do with it as far as food storage. The Michigan Asparagus Advisory Board says the key to preventing your stalks from spoiling is keeping them “clean, cold, and covered.”

Trim the asparagus stem ends about one quarter inch and wash the stalks several times in lukewarm water. Pat dry and wrap in plastic wrap. For ultimate freshness, wrap a damp paper towel around the stalk ends and store upright in a glass filled with an inch or two of cold water.

Ginger is another one of those items where you may buy a lot but only need a little bit at a time. The best way to avoid spoilage in this case is to only buy what you need. While the pieces of ginger at the store may be large, it’s perfectly acceptable to break off a smaller piece for purchase.

Aside from this there are also some storage methods that will extend the life of the knob of ginger you do bring home from the shop. Store your ginger unpeeled in a plastic bag in the fridge, or even better, in the freezer. When you need to use some, peel off only as much skin as the amount you need to use, then grate it right into your dish. Freezing the ginger prolongs its life and also makes it super easy to grate.

Is It Food Poisoning or the Stomach Flu?

We couldn’t possibly count the number of leaves of lettuce that have met a tragic demise in crisper drawers all around the country. Sometimes it seems like one day you had lettuce and the next, a pile of green slime. All this can be avoided however, with a little extra care when it comes to storing your greens.

Moisture will cause your leaves to wilt faster so the best storage technique is to wash and fully dry those leaves, then store in a sealed plastic bag between two DRY paper towels. It may seem like extra work but it could mean the difference between crisp, fresh lettuce and seeing your dollars end up in the bin.