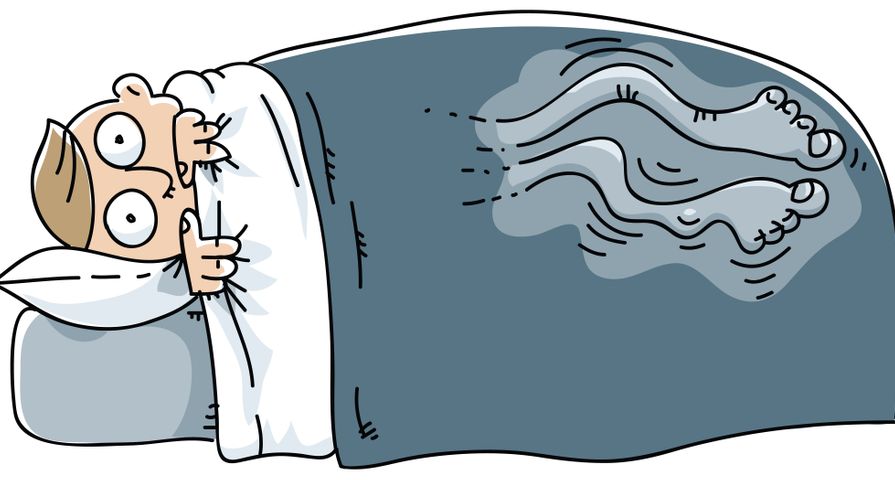 When you feel like your legs want to do their own thing, especially when you’re minding your own business on the couch or even trying to fall asleep in bed, it’s probably restless leg syndrome (RLS).

This is actually a “neurological sleep and movement disorder” that causes uncomfortable sensations in the legs that make you want to move them around for relief, says EveryDayHealth.com. However, there are certain factors that may be causing the problem or making it worse, so let’s take a look at 12 possibilities…

Among women, around 10-percent of the population is affected by RLS. However, that number skyrockets to 33-percent among pregnant women, according to EveryDayHealth.com.

The most common time for symptoms to be at their worst is the third trimester, adds the source. The reason behind this boost is possibly linked to a lack of iron or folate, and increased estrogen levels may also play a role, it adds. Talk to your doctor about safely upping your iron and folate intake during your pregnancy.

Statistics show Americans drink an average of close to two cups of coffee per day, and depending on the source, estimates can be higher than that. However, if you’re experiencing RLS, then caffeine might be to blame, says WebMD.

Remember, caffeine shows up in more than coffee – also check your tea, cola, and even energy drinks and chocolate bars, it adds. There are even some cold medicines that contain caffeine as well, so be sure to double-check the label or consult with a pharmacist when you’re buying over-the-counter remedies.

As we noted, the caffeine content of some medications can make your RLS flare-up. However, EveryDayHealth.com says both prescribed and over-the-counter (OTC) drugs can also block dopamine, which has been linked to the problem.

The “worst culprits” among medications include OTC antihistamines, cold remedies, anti-nausea drugs, and prescription antidepressants, it notes. It might be a good idea to ask your doctor if you believe your medications are contributing to your RLS.

Drinking alcoholic beverages may help you feel more relaxed in the short term, but it’s not going to do much for your RLS, says EveryDayHealth.com. The source says there’s some “anecdotal research” that claims both coffee and alcohol can worsen symptoms by disrupting sleep patterns.

It adds that while consuming alcohol close to bedtime might help you get to sleep easier, it can also trigger waking up throughout the night. If you’re going to have a drink, at least try to keep it in moderation and not into the hours when you’re usually getting ready to hit the sack. Alcohol can also lead to something called peripheral neuropathy, which is damage to nerves in the feet (and hands) that can be caused by alcoholism.

What you eat may go straight to your legs. WebMD explains that refined sugar is hidden in many processed foods, as well as sweetened drinks, and can cause flare-ups of your RLS.

While the source doesn’t give an explanation why, it notes that some people who suffer from the syndrome have reported fewer symptoms when they lessen their sugar intake. Look out for not only processed foods but also sauces and condiments (such as ketchup and spaghetti sauce) that can be especially high in refined sugars.

WebMD says the outside conditions – and even the temperature of the water you use to cleanse yourself – may be causing some of your RLS symptoms. But which end of the temperature spectrum that’s causing the issue may differ from case to case, it adds.

For example, it explains hot and humid weather may be a problem for some RLS sufferers, while others might experience their worst symptoms when it’s cold. Depending on your temperature trigger, you can try having a hot bath, a cold shower, or using ice packs or heating pads to get some short-term relief, suggests the source.

It’s pretty much unanimous among health professionals that getting regular exercise is good for your health, but there is such a thing as overdoing it, and it may also be contributing to your RLS symptoms. EveryDayHealth.com says that while “moderate” activity can actually help relieve some symptoms, going for gold can aggravate it (especially if you’re new to the routine).

The source says examples of strenuous exercise include training for a marathon, cycling long distances, or lifting too much weight with your legs (on a leg press) at the gym. Try cutting back temporarily to see if it has a positive impact on your RLS.

In today’s busy lifestyles, stress is difficult to avoid – but there are ways to help cope with it. This may be especially important to those that deal with anxiety or have restless leg syndrome, says EveryDayHealth.com.

The source cites an assistant professor of neurology at the Johns Hopkins University School of Medicine, who explains, “Stress and anxiety are big restless legs triggers.” It suggests learning stress reduction techniques such as yoga or deep breathing, and there are several more natural methods you can consider as well.

Turns out if you sit around a lot, your legs may want to get a move on in the form of RLS. Aside from leading a sedentary lifestyle, WebMD says common situations where your legs may be idle for long periods of time include long road trips or flights, and even sitting still in a movie theatre through a long film.

If you’re in a car, you can stop periodically to stretch your legs and take a short walk, and in a plane, you could stand up occasionally or walk in the aisle if it’s convenient. Unfortunately, there’s no “pause” button at the movie theatre, so maybe choose movies that aren’t 3-hours long.

Interestingly, lack of sleep can make RLS worse, while RLS can cause you to lose some sleep – it’s a bit of a vicious cycle. In fact, when diagnosing RLS, a doctor will ask you questions such as how long it takes you to fall asleep or if there are any sleep disturbances, says the National Institute of Neurological Disorders and Stroke.

It notes that sleep deprivation from conditions such as sleep apnea may play a role in triggering or worsening RLS symptoms. Luckily, there are ways to address sleep apnea, and you can also follow the previous advice to avoid alcohol near bedtime.

As if you didn’t have enough reasons to kick the smoking habit, you can add easing your RLS symptoms to the list. EveryDayHealth.com says nicotine in cigarettes can be a trigger of the problem.

Smoking cessation will also improve your cardiovascular and lung health. It’s easier said than done, but you can turn to your doctor for solutions to help you quit smoking for good, suggests the source.

Wearing clothing is a fact of life, but you can at least choose the clothing you’re wearing. Not only does this reflect your fashion taste, but also changing up your apparel may actually ease some of your RLS symptoms, notes WebMD.

This can occur if you’re sensitive to certain types of fabric or if your clothing is too tight, it adds. Be mindful of the type of clothes you’re wearing when your symptoms are at their worst, especially if it’s disrupting your nighttime slumber, says the source.