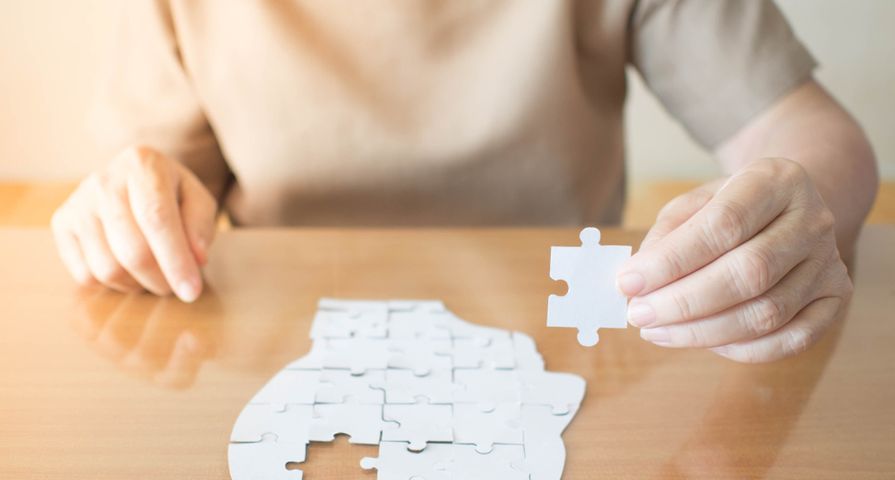 Although medical researchers are unable to pinpoint the exact cause of Alzheimer’s disease, many studies link exposure to certain chemicals, medications, and even emotions to heightening the risk of developing the disease.

Here are 18 alarming and lesser-known triggers for Alzheimer’s disease….

According to the journal JAMA Internal Medicine, taking certain prescriptions and even easily accessible over-the-counter drugs can raise the risk of developing Alzheimer’s disease and dementia.

Notably, prescription tricyclic antidepressants (i.e., doxepin) and antimuscarinic drugs prescribed for better bladder control (i.e., oxybutynin) have been linked to increasing the likelihood of dementia. Whereas, certain non-prescription antihistamines (i.e., chlorpheniramine and diphenhydramine [Benadryl]) have also been linked to the development of dementia.

There are more active ways to promote brain health than just doing the Thursday crossword puzzle. Researchers from the Alzheimer’s Association (AA) say that physical activity, particularly of the aerobic nature, helps protect brain function and staves off brain diseases, such as dementia and Alzheimer’s.

In fact, a 2015 study from the AA showed that individuals who make aerobic activity a part of their daily lifestyle are able to decrease their risk of brain disease by over 50-percent. So, get moving if you want to ward off Alzheimer’s and dementia! (For other tips on how to prevent Alzheimer’s, check out this article on Ways to Prevent Alzheimer’s Disease).

Much of science focuses on the external or environmental factors associated with increased Alzheimer’s risk. However, a 2010 report featured in the journal Neurology points out that state of mind can have a big impact on our health.

Perhaps an extension on the previous slide, psychologists from the Yale School of Public Health claim that your beliefs about growing older can largely impact your chances of devloping Alzheimer’s disease. (To help maintain positivity, check out Keys to Happy, Healthy Aging for Seniors).

Researchers have long linked high blood levels of lead to an increased risk of heart disease. However, more recently lead exposure and the presence of oxidative stress and heavy metals has been linked to decreased IQ and increased risk of dementia.

For instance, a 2009 study published by the journal Neurology noted that adults with elevated lead levels in their blood (21-percent or more) were prone to high blood pressure, which can cause oxidative stress and inflammation of the brain and body.

Research links toxic insecticides (i.e., DDT and DDE) to increased Alzheimer’s risk, which led to the 1972 banning of DDT in the U.S. But despite the ban, the Centers for Disease Control and Prevention note that humans can still be exposed to these toxins via chemical pesticides in the environment, namely through food sources such as fish, poultry, and dairy.

For instance, data from the Environmental and Occupational Health Sciences Institute (EOHSI) specifically found that individuals with increased blood levels of insecticides were significantly at risk for an Alzheimer’s diagnosis. These findings identify a new risk that can be tested to help aid earlier diagnosis.

Research done by Glenn Smith, Ph-D from the Mayo Clinic suggests that severe head-related injuries with the greatest increased risk of future dementia are those in which the individual is unconscious for more than 24 hours. Similarly, head injuries that result in unconsciousness from anywhere between 30 minutes and 24 hours also have a slightly less increased risk.

Of course, repeated head injuries put individuals at risk for potential problems with thinking and cognitive reasoning. Wearing a helmet could potentially prevent the risk for Alzheimer’s! (For more information check out Concussion Symptoms: How Do I Know If I Have a Concussion?)

Alzheimer’s and type 2 diabetes are more related than you’d think! They share the same cardiovascular risk factors such as high blood pressure, high cholesterol, heart disease, obesity and poor blood circulation. Individuals who develop type 2 diabetes midlife are at a higher risk for vascular dementia or Alzheimer’s disease, because these conditions are essentially a third type of diabetes.

According to the Alzheimer Society Canada, “People with Alzheimer’s disease are in a diabetic state, partly due to the decrease in or insensitivity to [the hormone that regulates glucose in the blood].”

Humans are social creatures, and they crave social interaction. While some of us are a little more introverted and prefer to avoid too many social gatherings or interactions, research shows that people in late life who feel lonely are more likely to develop Alzheimer’s disease.

Danish researchers have found a link between Alzheimer’s disease and rosacea, which is a chronic inflammatory skin disorder. People with rosacea produce higher levels of matrix metalloproteinases and antimicrobial peptide proteins, which are responsible for brain-wasting disorders.

According to the Alzheimer’s Association, there are very strong links between heart health and brain health. “This connection makes sense, because the brain is nourished by one of the body’s richest networks of blood vessels, and the heart is responsible for pumping blood through these blood vessels to the brain,” writes the source.

With that being said, the risk of developing Alzheimer’s (or vascular dementia) can be triggered by conditions that damage the heart and its blood vessels. In some cases, these conditions are within our control and we can diminish our chances of preventing them and therefore getting Alzheimer’s by making healthy lifestyle choices. Some of the most common conditions that damage our heart are heart disease, diabetes, stroke, high blood pressure and high cholesterol, explains the Alzheimer’s Association.

The source explains that among the research that links brain health and heart health is donated brain tissue. This tissue that researchers have examined shows “plaques and tangles are more likely to cause Alzheimer’s symptoms if strokes or damage to the brain’s blood vessels are also present.”

As we just previously mentioned, conditions that put our heart at risk, such as high blood pressure (hypertension), can act as a trigger for Alzheimer’s disease and increase a person’s risk of developing it. The Alzheimer’s Society Canada notes that people who are suffering from hypertension in midlife are more likely to develop dementia than people who aren’t.

“High blood pressure affects the heart, the arteries and blood circulation so it increases the risk of developing Alzheimer’s disease, particularly vascular dementia,” writes the source. The best way to treat this and avoid the disease altogether is to start exercising and eating healthier. The Alzheimer’s Society Canada explains that this should bring the risk down, and if it doesn’t, there are medications to help.

In addition to increasing a person’s risk of developing cancer, cardiovascular disease, and diabetes, cigarette smoking can trigger Alzheimer’s disease. The Alzheimer’s Society Canada provides research stating a 45-percent risk increase for Alzheimer’s. The source also states that cigarette smokers are at a higher risk for developing vascular dementia and other forms of dementia.

Luckily, there is also research that states those who did smoke are able to reduce their risk by quitting. So, there’s no need to feel that mentality of “well, I already smoked for ___ amount of time, might as well keep going.” Unlike some other conditions linked to smoking, you are able to lessen the effects on the brain by simply quitting. Of course, the earlier the better!

Similar to high blood pressure, high cholesterol levels in midlife can also increase a person’s risk of developing Alzheimer’s disease, particularly in comparison to those who are completely healthy. “Research has shown that people who have their high cholesterol treated with drugs called ‘statins’ have a lower risk of dementia,” writes the Alzheimer’s Society Canada. Therefore, seeking treatment is extremely important both for the heart and the brain.

In addition to all this, high cholesterol also increases a person’s risk for developing high blood pressure, which as we already mentioned, is yet another trigger for Alzheimer’s disease.

There’s no denying that alcohol has a hugely negative affect on our health, especially when it’s consumed in excess. In fact, the Alzheimer’s Society Canada states that it ranks as the fifth most important risk factor for death and disability throughout the world. “It has been implicated as a causal factor for more than 200 diseases and injuries, including major non-communicable diseases such as liver cirrhosis, some cancers and cardiovascular disease,” writes the source.

Strangely enough, there is evidence that a moderate amount of alcohol on a regular basis can lower the risk of dementia, and those who don’t drink alcohol at all are at a slightly higher risk. However, that being said, the people who are at the highest risk are those who drink alcohol excessively, says the Alzheimer’s Society Canada.

We’ve all been there before — fatigued, tired, and lacking energy due to restless sleep or a string of bad nights of sleep. However, the rate of sleep deprivation among the population is increasing and this is largely due to the fact that people are taking on more and more in their personal and professional lives. It’s not uncommon for the average person to struggle with sleep which comes with a string of other issues, including an increased risk of Alzheimer’s disease.

“Sleep problems are common in people with Alzheimer’s disease, but it wasn’t clear whether this was cause of effect,” says Domenico Pratico, MD, a pharmacologist and immunologist at Temple University in Philadelphia when talking to Prevention.

To test this theory of whether chronic lack of sleep affects the brain, Dr. Pratico and a team of researchers studied a mouse model of Alzheimer’s disease. To gather their research, they would only let the mice sleep for 4-hours a night and found that this increased the amount of tau protein in their brain, in addition to “[altering] learning and memory, as well as how well neurons were able to communicate with each other.” As a result, it quickly became clear that lack of sleep could put enough stress on the brain and body that it increases a person’s chance of developing Alzheimer’s disease.

“Sleep deprivation is a form of chronic stress on the body. It’s also the time when the brain gets rid of bad things,” such as an excess of amyloid beta protein, says Dr. Pratico to Prevention. (Here are some Tips for a Better Night’s Sleep).

Diabetes in the Brain

We already talked about how diabetes is one of the common triggers for Alzheimer’s disease, but Prevention presents a whole new condition introduced by the neuroscientist Suzanne de la Monte, MD, of Brown University. She refers to this new condition as diabetes in the brain. “Brain cells use glucose as fuel, and [the hormone] tells these cells to slurp up glucose in the blood,” explains Prevention. Dr. de la Monte believes the brain can become resistant just like any other cell in the body, and that the link between Alzheimer’s disease and diabetes is so close that she refers to Alzheimer’s disease as type 3 diabetes.

Prevention explains that this not only encourages people to live a more active and healthy lifestyle through diet and exercise but also could lead to improvements in the treatment of Alzheimer’s.

It’s unclear why this is, but according to WebMD, people with Down syndrome have a higher risk of developing Alzheimer’s disease in their 30s and 40s.

NHS tries to offer some insight as to why this is by writing, “This is because the genetic fault that causes Down’s syndrome can also cause amyloid plaques to build up in the brain over time, which can lead to Alzheimer’s disease in some people.”