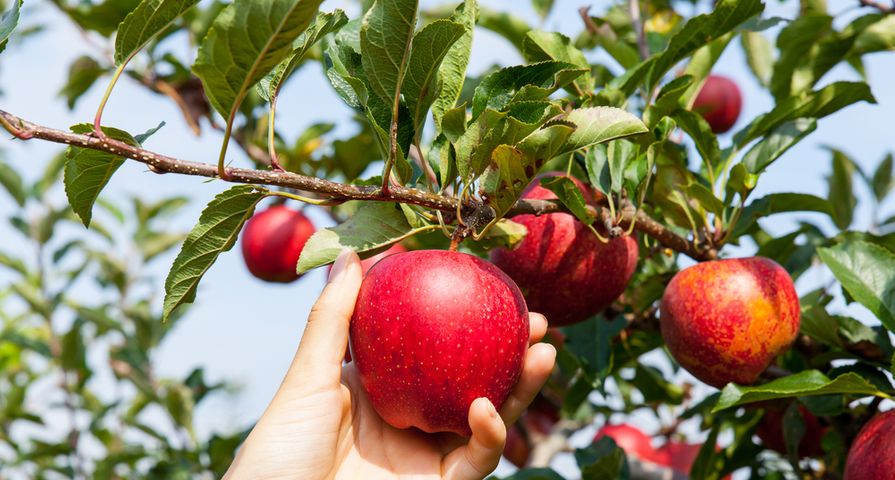 There’s nothing better than biting into a crisp red apple, especially in the season of fall when everyone is rushing to the nearest orchard to pick their own basket of apples (and probably snap a few fall-themed pictures). This delicious fruit is one of the most favourable, mainly because it is widely accessible all year round, easy to grab on the go, and fairly neutral in taste.

You don’t have to be a genius to know that apples are good for you. Ever heard the saying, “an apple a day keeps the doctor away?” Well, turns out there might be some truth to it! Apples have some pretty incredible health benefits and in case you need any convincing on the subject, here are a few reasons why you should start eating apples more regularly…

Foods that are high in fiber can help with weight loss because they keep us full for longer periods of time which in return makes us eat less. It also keeps our digestive system happy as it helps promote regular bowel movements, is good for colon health, and might even lower cholesterol, says LiveStrong. The Institute of Medicine recommends women eat 25-grams of fiber on a daily basis and men consume 38-grams.

LiveStrong points out that one cup of apples (with the skin) amount to nearly 3-grams of fiber. So even eating just one apple in the morning for breakfast will help kickstart your fiber intake for the day. In addition to being packed with fiber, apples are also low in calories (1-cup equals 57 calories and almost no fat), so it’s the perfect guilt-free snack. For some more flavor, try eating it with a little bit of peanut butter.

Your mother probably told you that apple juice is bad because it’s loaded with sugar, and while that is true, we might have found a reason to keep drinking it (at least in moderation). A study conducted by researchers at the Center for Cellular Neurobiology; Neurodegeneration Research University of Massachusetts, Lowell, found that apple juice may help in the fight against Alzheimer’s disease by preventing the decline of the neurotransmitter acetylcholine.

This specific neurotransmitter is responsible for memory and brain health, says Alzheimers.net and has been known to slow the mental decline of Alzheimer’s when it’s increased in patients. The study looked at mice who were fed the human equivalent of two cups of apple juice a day and found that their cognitive function actually improved.

Another study from back in 2006 tested 21 people between the ages of 72 and 93. This study found that drinking apple juice only three times a week can reduce the risk of Alzheimer’s by a whopping 75-percent.

Works to Boost the Immune System

Red apples are loaded with antioxidants which is one of the many reasons they’re so healthy. One antioxidant in particular, quercetin, works to boost our immune system especially when the body is under stress. “This antioxidant boosts the immune system to build the natural defenses of the body. The other nutrient present in an apple is vitamin C that has anti-inflammatory properties. Fibers also enhance the immune system,” writes StyleCraze.

StyleCraze points out that researchers at the American Association for Cancer Research say that apples could reduce the risk of pancreatic cancer by as much as 23-percent. How is this possible? “Several compounds enclosed in apple peels called triterpenoids, showed potential to anti-growth activities against cancer cells as identified by researchers at Cornell University,” writes StyleCraze.

Are you somebody who prefers to enjoy their apple peeled? You might want to think twice about doing that! StyleCraze and EatingWell both say that the skin of the apple plays a huge role in its health benefits, especially when it comes to those that fight cancer. An apple’s skin is loaded with fiber which helps prevent colorectal cancer and it’s where most of the cancer-fighting antioxidants are.

In fact, EatingWell also states that several studies have shown that apples are the most important fruit to consume when it comes to colorectal cancer. “An analysis of several Italian studies found that eating one or more servings of apples a day helped lower the risk of colorectal cancer more than eating any other fruit,” writes EatingWell.

Good For Your Heart

We’re starting to see a trend here — it seems the fiber content in apples is one of its best qualities! Researchers at Florida State University found that the high fiber content in apples helps improve cholesterol levels by lowering levels of LDL cholesterol (the “bad” cholesterol) and increasing the HDL, also known as “good” cholesterol. Apples also have the strength to fight high blood pressure. Several major studies discovered that people who ate more fruit, including apples, were less likely to develop high blood pressure.

When it comes to heart disease, EatingWell quotes a Women’s Health Study which “showed that women who ate apples over the seven-year study period had up to a 22-percent reduced risk of heart disease.” And if that’s not enough for you then get a lot of this! A Dutch study found a link between stroke risk and the regular consumption of pears and apples. Basically, the fiber and quercetin flavonoid in apples helps to decrease a person’s chance of having a stroke by 52-percent!

Maybe that other popular saying “apple of my eye” has some weight to it? While many people are still divided over whether or not this is true, Best Health says that recent long-term studies have found that eating apples on a regular basis can help improve eyesight and reduce the risk of developing cataracts.

The studies they are talking about found that people who eat lots of fruits, especially ones that contain lots of good antioxidants, like apples, are approximately 10 to 15-percent less likely to suffer from cataracts.

Believe it or not apples can help prevent asthma, and it’s all thanks to the flavonoid quercetin which according to Healthline, helps “regulate the immune system and reduce inflammation.” To back up this claim the source cites a study that looked at 68,000 women, some of whom ate apples on a regular basis while others didn’t. The study found that those who eat about 15-percent of a large apple each day were found to have a 10-percent lower risk of developing asthma.

StyleCraze says that apples not only prevent asthma, but help treat it as well! Apparently the phytochemical and polyphenol chemicals give apples their healing powers that can help an individual who suffers from asthma recover by improving lung function so they can breathe a little easier. Oddly enough, this source also cites a study on apples and asthma, but this one showed that apple juice has more benefits than eating a whole apple. “Research shows that children who consume apple juice regularly showed reduced risks of suffering from asthma attacks and wheezing problems as compared to those who seldom consume apple juice,” writes StyleCraze. “In contrast, eating whole apples didn’t seem to be of any benefit to the wheezing and asthmatic children.”

So what is it about apples that makes them so good for our gut? Healthline says it’s all thanks to pectin, a fiber within apples that acts as a prebiotic. In other words, apples feed the good bacteria in our gut. “Your small intestine doesn’t absorb fiber during digestion. Instead, it goes to the colon, where it can promote the growth of good bacteria. It also turns into other helpful compounds that circulate back throughout your body,” writes Healthline.

According to EatingWell, Harvard researchers found that people who ate apples on a regular basis (i.e. two servings a week) were able to reduce their risk of developing diabetes by 23-percent compared to those who didn’t. Experts believe the fiber is what helped stabilize blood sugar levels and that the flavonoids play a large role as well.

Another study that looked at 38,000 women found that those who ate at least one apple a day were 28-percent less likely to develop type 2 diabetes than those who didn’t eat apples at all.

The Incredible Health Benefits of Zucchini

Milk isn’t the only thing that will encourage strong bones — apples will too! “Researchers believe that a flavonoid called phloridzin found only in apples may protect post-menopausal women from osteoporosis and may also increase bone density,” writes Reader’s Digest. The source also notes that boron, another ingredient in apples, also contributes to strong bones.

We previously touched on this subject while talking about how beneficial apples are for the heart, but we’ll say it once more just for good measure! Apples have been shown to reduce cholesterol levels which provides a slew of other health benefits. According to Reader’s Digest and StyleCraze it’s due to their fiber content.

A medium apple contains more fiber than most cereals with a whopping 5-grams. “They’re also packed with pectin, a soluble fiber that reduces cholesterol. Pectin prevents cholesterol from building up in the lining of blood vessel walls, thus reducing the risk of atherosclerosis and heart disease,” says Reader’s Digest.

Gallstones are small, hard deposits made up of bile and other digestive fluids that form in the gallbladder, an organ located just underneath the liver on the right side of your abdomen. They usually start as a liquid and then solidify once there’s too much cholesterol in the bile. Gallstones can vary in size and number, but one thing’s for sure — they’re painful!

Gallstones are most likely to occur in people who are overweight, and according to the Mayo Clinic, most people who experience them have to have their gallbladder removed. “To prevent gallstones, doctors recommend a diet high in fibre to help you control your weight and cholesterol levels,” writes Best Health. This is where apples come in handy because as we’ve previously mentioned, they’re super high in fiber.

The Incredible Health Benefits of Olives

One of the best ways to treat hemorrhoids (or avoid them all together) is to eat more fiber. Fiber will help reduce the strain of bowel movements and as we’ve already mentioned apples are a good source of fiber, so start eating more of this delicious fruit!

Irritable bowel syndrome (IBS) is a fairly common disorder that can be extremely uncomfortable and embarrassing. This chronic condition affects the digestive system, primarily the large intestine and causes constipation, abdominal cramping, diarrhea, gas, and bloating. Not surprisingly, diet plays a huge role in managing the symptoms of irritable bowel syndrome. Those who suffer from IBS probably already know what foods to stay away from, which is mostly fatty foods and dairy. Instead of eating unhealthy foods like fast food and dairy, doctors recommend IBS patients eat a diet with more fiber which would include apples!

Not only can apples help ease the symptoms of irritable bowel syndrome, eating them regularly will ensure good digestion in the future. StyleCraze writes, “Including them in your daily diet will ensure that your digestive process stays intact. At the same time, it will keep away constipation and facilitate smooth movement of bowels.”