How to Care for Bee, Wasp, and Hornet Stings 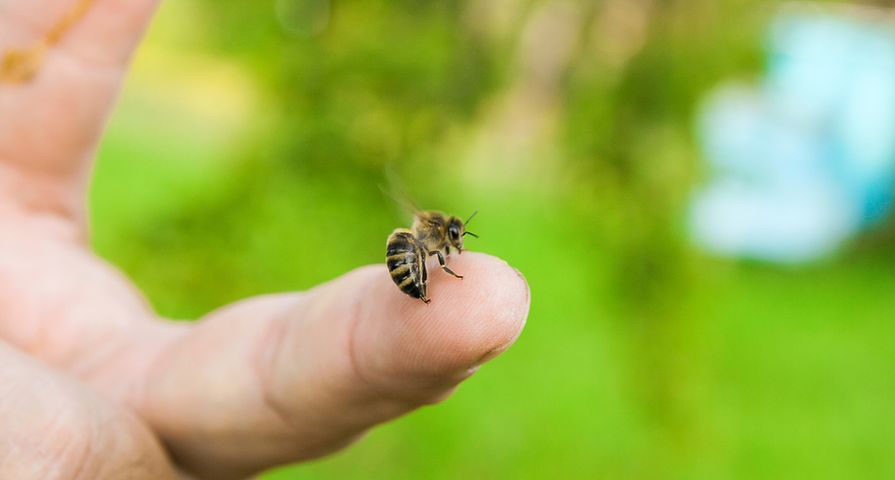 There are so many great things to enjoy about being outdoors, especially during those warmer months in the spring and summer. However, it’s not all sunshine and daisies. The warm weather also brings insects like bees, wasps, and hornets! While these pests play an important part in our ecosystem (especially the bees), they are a huge nuisance and can even be harmful.

Those unfortunate enough to have experienced a sting from any of these insects know that they can hurt and need to be treated with care. The specific treatment will depend on the severity of the sting, such as whether it was one or multiple, the type of insect, and if there’s an allergic reaction or potential for one. Here’s everything to know about how to care for a bee, wasp, and hornet sting…

Symptoms of a Bee, Wasp, or Hornet Sting

The symptoms of a bee, wasp, and hornet sting are somewhat similar, and unfortunately, they’re quite common, particularly in the summer months as people spend more time outside. Typically, they aren’t life-threatening, but they are painful. And for those who are allergic, it can be life-threatening.

Medical News Today explains that when a bee or wasp stings it typically leads to sharp pain and a puncture wound. Their stinger has a sac of venom attached to it which causes a local toxic reaction at the site of the wound. Normal reactions are pain that is sharp, burning, and usually lasts a few seconds. It can also become red and swollen, potentially itchy and painful. You might have some swelling and hives that peak at 48-hours and last up to 1 week, says the source.

There are also what is known as large local reactions which can lead to redness and swelling that spans 12-inches across the site of the wound. Medical News Today says an entire limb can swell for a few days, and in the case of multiple stings, there may be a rash, fever, nausea, and headache. And in rare cases, there might be swelling in joints for several days afterward.

One of the first things to do after identifying the sting is to remove the stinger and clean the affected area. Bees are the only ones who will leave a barbed stinger behind (and die shortly after), says Merck Manual. Wasps on the other hand have a stinger that can sting multiple times without becoming detached.

Removing the stinger will help prevent a skin infection. According to WebMD, some experts recommend using a credit card or some kind of blunt object. Gently scrape across the affected area. Avoid using tweezers or anything that could puncture or squeeze the venom sac and make symptoms worse, says Merck Manual.

Next, wash the sting site with soap and water. “Placing hydrocortisone cream on the sting can help relieve redness, itching, and swelling,” adds the source.

As with any injury that involves some swelling, it’s a good idea to apply ice or some kind of cold compress. This will provide mild relief. Everyday Health advises icing the area for 10-minutes on and 10-minutes off, as needed.

If you don’t have a cold compress, you can just use ice from the freezer. Wrap the ice in a towel or keep it in a cloth so that there’s no direct contact between ice and skin. If possible, elevate the affected area to prevent swelling.

In addition to cleaning and icing the area, take an antihistamine such as Benadryl or Claritin to reduce swelling. This is especially important for anyone suffering from an allergic reaction.

Anyone with a history of allergic reactions to bee, wasp, or hornet stings should also carry an EpiPen (epinephrine) and administer it immediately after being stung to avoid anaphylaxis, says Gene Conti, MD, an emergency medicine doctor at Halifax Regional Medical Center in Roanoke Rapids, North Carolina to Everyday Health.

You may also take an over-the-counter pain reliever such as Advil, Motrin (ibuprofen), or Tylenol (acetaminophen) to reduce pain.

To reduce further irritation and pain, place a bandage over the area. This helps deter clothing and jewelry from rubbing against the sting.

As long as there is no severe allergic reaction to the sting, most stings can be treated at home with any of the above treatments, or some of the following home remedies.

According to Healthline, vinegar is a popular remedy that people use for wasp stings. It’s believed that the acidity of the vinegar can help to neutralize the alkalinity of wasp stings. However, be sure to know what was responsible for the sting before using this remedy because the source also notes that the opposite is true for a bee sting which is more acidic. “To use vinegar on wasp stings, soak a cotton ball with apple cider or white vinegar and place it on the top of the affected area of skin,” writes Healthline. Use slight pressure to relieve pain and inflammation. Leave the cotton ball there for several minutes.

You could also use an alkaline solution of baking soda (sodium bicarbonate) and water, says Medical News Today. The ratio for this remedy is 1-tablespoon to 1-pint of water. You could also try using aloe vera gel because stings often cause a histamine reaction to the skin. “The gel has antibacterial properties as well as an anti-inflammatory effect due to the natural salicylates and inhibition of histamine formation,” says Maureen Roland, RN, a clinical education specialist and outreach coordinator at Banner Poison and Drug Information Center in Chandler, Arizona.

When to Seek Medical Attention

According to Everyday Health, about 50 to 100 people die from bee and wasp stings each year. The most common reason behind these incidents is anaphylaxis. Call 911 if there are any signs of wheezing, swelling, or other symptoms of anaphylaxis.

“Anaphylaxis is the overwhelming response of our immune system. Instead of just a localized rash and itching, blood pressure drops, you pass out, and breathing stops, which can lead to respiratory failure and death,” says Dr. Conti to Everyday Health.

You should also seek medical attention if there is any blistering or signs of an infection, such as pus. Or if symptoms do not go away or get better within a few days, notes Medical News Today.

Most stings either from a bee, wasp, or hornet don’t require medical attention. However, those who are allergic will experience a rash, hives, or itching on the body. These reactions are considered mild if they don’t affect breathing or any other vital signs, says WebMD. Dizziness can also occur, as well as a slight drop in blood pressure.

A moderate allergic reaction is just a step above mild in the sense that it will also likely cause a rash on the body, as well as some mild breathing problems. This can be treated with injections of antihistamines, steroids, and epinephrine.

You’ll likely get these treatments at the scene or in the ambulance and need to be observed for a period of time or even admitted to the hospital.

Severe allergic reactions can cause low blood pressure and swelling that blocks air from getting into the lungs, as well as other serious breathing problems. In these cases, it’s a life-threatening emergency. “Treatment may include placing a breathing tube into your trachea. You will likely be given injections of antihistamines, steroids, and epinephrine,” writes WebMD. “Intravenous fluids may also be given.”

You’ll be treated at the scene by paramedics and then closely monitored at the hospital. Depending on the severity of the incident, could even wind up in the intensive care unit.

The most obvious complication is a severe allergic reaction, but also if the patient has been stung more than 1,000 times. According to Merck Manual, “The average person can safely tolerate 10 stings for each pound of body weight. That means that the average adult could withstand more than 1,000 stings, whereas 500 stings could kill a child.” Even if there is no allergic reaction, someone with this many stings will need to go to the hospital for observation and may require intensive medical care.

Other potential complications involve where the sting occurs. WebMD explains that stings inside the mouth or throat will likely require a visit to the emergency department for observation, as well as further intervention if complications occur. You can also be stung on the eyeball which will require further evaluation from an eye doctor.