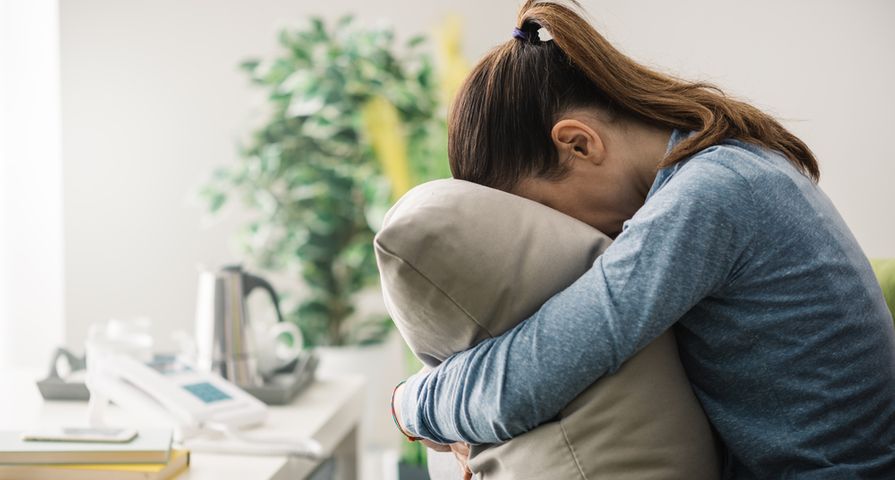 Depression is a mental illness that affects millions of Americans – in fact, Healthline says that in any given year, about 16-million adults in the country have had at least one depressive episode.

However, depression is not experienced in the exact same way between men and women – there are varying symptoms due to differences in hormones, notes the source. It’s also more common in women. Let’s take a closer look at 13 facts about depression and how it relates to women in particular…

The main definition of depression is pretty clear – WebMD explains it’s defined by feelings of sadness, hopelessness, and helplessness. The severity of depression symptoms can range from mild to severe.

Clinical depression, also known as major depression, is “a serious and pervasive mood disorder,” notes the source. There are a number of symptoms in women that point towards depression, which we’ll get to next…

The same source explains that of the millions of people that experience depression each year in the U.S., the majority of them are women. It adds that women are two times more likely to develop clinical depression than men, and up to 1-in 4 women may have an episode of major depression at some point in their life.

The source adds that although women are far more likely to experience the illness, “Unfortunately, nearly two-thirds do not get the help they need.”

Symptoms of Depression in Women

As Healthline points out, depression isn’t merely feeling down for a short time. “It’s a serious mood disorder that can affect your daily life,” it adds. That being said, the symptoms of depression in women include not enjoying activities you’d normally enjoy, losing your concentration or your appetite, and losing “an abnormal amount of weight at one time,” it notes.

Other symptoms include feeling fatigued with no explanation, feeling anxious or irritable, crying without specific cause, losing sleep at night, having “dramatic” mood swings, and even having thoughts about death, adds the source.

Differences in Depression By Gender

Healthline explains that men and women tend to experience depression differently, which can appear different to someone observing the behaviors. “Some of these differences result from the hormonal differences between men and women,” it explains.

While hormones play a role, so do social norms, adds the source. For example, it says men are “expected to be tough” and women “are often expected to be more openly emotional.” That means a man suffering from depression may appear more outwardly angry and start fights, while a woman may appear sad and turn blame towards themselves, it adds.

In some cases, women may be experiencing bipolar disorder, which alternates between depression and mania, which WebMD describes as a “highly energized state with elevated mood.” These depressive or manic episodes can last days to months, it adds.

Mania may not sound that bad, but WebMD says it’s still a condition that needs to be medically assessed. That’s because mania can carry some risky behaviors in women – such as increased sexual activity, poor judgment, and “inappropriate social behavior,” notes the source.

Why is depression so much more common in women than men? WebMD says it is likely tied to the hormonal changes a woman experiences throughout her life. It notes that the increased risk of depression in girls jumps during the onset of puberty.

Hormone levels not only change during puberty, but also during pregnancy, post-pregnancy, and menopause, it says. Also, women experience fluctuations in hormones monthly due to their menstrual cycle, which can lead to premenstrual dysphoric disorder (PMDD) that is marked by depression and anxiety leading up to menstruation.

The Mayo Clinic says PMDD is a severe form of premenstrual syndrome (PMS) that affects women. While PMS can impact your mood, PMDD “causes extreme mood shifts that can disrupt your work and damage your relationships,” says the source.

PMDD and PMS share timing – more specifically, the symptoms will begin 7 to 10-days before your period starts, and can last for the first few days of your period, it adds. Both can have physical symptoms including bloating, fatigue, and breast tenderness, adds the source.

WebMD explains that pregnancy was once “assumed to be a period of well-being that protected women against psychiatric disorders,” but that thought has been debunked. In fact, it says pregnant women are almost as vulnerable to depression as women who aren’t pregnant.

There are specific risk factors for developing depression during pregnancy, such as a history of depression or PMDD, says the source. Also, interestingly, the risk increases based on age – and it’s actually the younger pregnant women who are more likely to experience pregnancy depression, it adds. “The younger you are, the higher the risk,” it adds. External factors such as limited social support and marital conflict can also contribute to risk.

This is another form of depression unique to women, and it occurs during pregnancy or soon after you’ve given birth (more commonly known as postpartum depression), notes Healthline.

“Your body’s hormones can change wildly while you’re pregnant and after birth,” it notes, adding the changes can negatively impact your moods and contribute to depression and anxiety. It can be very concerning – especially when it turns to thoughts of suicide or believing you’re not capable of caring for your baby or your own well-being. “Things happening in your life, such as relationship issues, a miscarriage, or not feeling supported by friends or family, can also make you feel more depressed during this time,” it adds.

This is the stage of life just before menopause, and it can cause irregular menstrual cycles, “erratic fluctuations” in hormone levels, loss of sleep (insomnia) and hot flashes, explains Healthline.

There is evidence linking perimenopause with mood disorders – the source cites studies published in Archives of General Psychiatry that show women during this phase of their lives are 2-times more likely to be diagnosed with major depressive disorder, and four times more likely to develop symptoms. The studies also linked frequency of hot flashes with intensity of depression symptoms, it adds.

As WomensHealth.gov explains, a doctor may approach treatment for depression with therapy, drugs, or a combination of the two. You may be referred to a doctor that specializes in mental health, it adds.

While mild depression often responds positively to therapy, those with moderate to severe depression may need antidepressant medications (that can take up to months to improve mood), it adds.

While it’s believed certain antidepressants (and other medications) may decrease your chances of getting pregnant in the first place, treating depression during pregnancy is a different challenge.

Treatment for pregnant women experiencing depression includes support groups, private psychotherapy, light therapy (using light to elevate mood), and certain medications, according to AmericanPregnancy.org. Untreated depression during pregnancy can lead to risky behaviors such as drinking, smoking, and poor nutrition, which can impact birth weight and fetal development, adds the source. Always talk to your doctor about possible options if you’re feeling signs of depression, whether pregnant or not.

Healthline.com explains that seeing a therapist can be very helpful in the case of depression, but there are other things you can do – such as getting outside in sunlight for at least 30-minutes per day (to treat depression for seasonal affective disorder).

It also says that regular exercise and a healthy diet can naturally improve your mood and make depression symptoms less severe. “If stress is causing your depression, doing activities that help you feel calm, such as meditation or yoga, can relieve some symptoms of depression,” it explains. Try to surround yourself with supportive and positive people to help you cope, it adds.