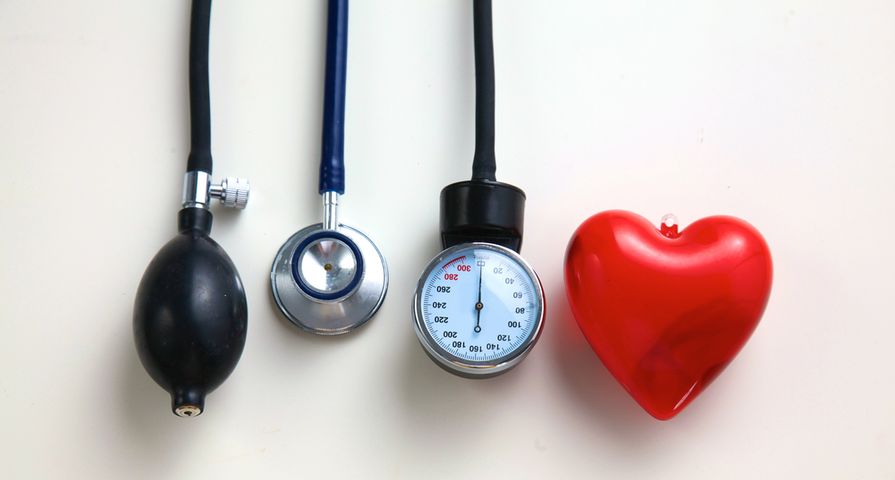 High blood pressure (also known as hypertension) has been called the “silent killer” because it often doesn’t present any symptoms, and you may have no idea you have hypertension until your doctor finds it (adding to the importance of getting a physical on an annual basis).

Symptoms sometimes aren’t obvious until your blood pressure is dangerously high, and in some cases, you may suffer a medical episode first before the underlying cause is determined as hypertension. Let’s have a closer look at 12 things to know about high blood pressure, and how to manage it…

Healthline notes that blood pressure is a measure of “how much blood is passing through your blood vessels and the amount of resistance the blood meets while the heart is pumping.”

Basically, narrowing arteries cause the pressure to increase, and that can lead to health problems such as heart disease down the line. If your doctor tells you that you have high blood pressure, then your blood pressure is at unhealthy levels that need to be managed, it adds. An eye-opening statistic from the source is that about 50-percent of American adults will be diagnosed with hypertension under updated diagnostic guidelines.

There’s More Than One Type

Healthline also points out that while high blood pressure is usually a chronic condition, it can have different causes. It breaks it down into two categories: namely primary and secondary hypertension.

Primary hypertension, the most common form, is when your high blood pressure isn’t the result of any specific cause, and develops over time. Healthline says many of these cases have hereditary factors (family history). Meanwhile, secondary hypertension is “the direct result of a separate health condition,” such as kidney disease, congenital heart defects, and obstructive sleep apnea, it adds.

As the Mayo Clinic confirms, there’s usually no one root cause of hypertension among adults, and it usually develops “gradually over many years.” This type of high blood pressure is also referred to as essential hypertension and is often linked to obesity, poor diet choices, genetics, and lack of exercise.

This is the case in individuals that have no identifiable medical causes of high blood pressure. However, you may have already been diagnosed with another problem that can cause hypertension, which we’ll get to next…

Causes of secondary hypertension include obstructive sleep apnea, kidney problems, tumors of the adrenal glands, thyroid issues, congenital defects of blood vessels, as well as use of illegal drugs (namely cocaine and amphetamines) or even prescription ones (such as birth control pills, cold medications, decongestants, and over-the-counter pain relievers), it adds.

There May Be No Symptoms

As we noted before, there may be no warning signs of high blood pressure until a doctor discovers it. In fact, WebMD notes that about 33-percent of people with hypertension aren’t aware of their condition.

The source goes on to say that the only real reason the others know about their condition is because they have had regular checkups by a physician, which is especially important if you have close relatives with a diagnosis of high blood pressure.

Symptoms Mean You Could Be in Danger

When you do start to notice symptoms, your blood pressure problem is severe and you should call a doctor immediately, notes WebMD. Telltale symptoms that your blood pressure has reached dangerous levels include a severe headache, fatigue, confusion, difficulty breathing, and chest pain, it adds.

Other symptoms that point to severe hypertension include sudden vision problems, an irregular heartbeat, a pounding in your chest, neck, or ears, or even blood in the urine, says the source. “You could be having a hypertensive crisis that could lead to a heart attack or stroke,” it warns.

Aside from the symptoms we’ve already mentioned, you could have other warning signs that may or may not be related to high blood pressure. These particular symptoms, as outlined by the American Heart Association, include blood spots in the eyes. An eye doctor may also be able to determine whether you have damage to an optic nerve as a result of high blood pressure, it adds.

Other symptoms that can suggest hypertension include facial flushing, which can also be a result of sun exposure, reactions to skin products, emotional stress, and alcohol consumption, it adds. Dizziness may be a side effect of some blood pressure medications, and it could be a warning sign of a stroke, notes the source.

Healthline explains there are five categories to grade the severity of hypertension in adults. While “healthy” is the ideal place to be at, the first level indicating a risk is “elevated,” followed by Stage 1 hypertension and Stage 2 hypertension.

Following Stage 2 is hypertensive crisis, where you don’t want to be. “Blood pressure in this range requires urgent medical attention,” says the source. That’s the point where you’ll start having symptoms such as chest pain, shortness of breath, and sudden visual changes, it adds.

Pregnancy Can Cause Hypertension

Healthline says that pregnancy can trigger high blood pressure in some cases, and that there are different types of high blood pressure disorders linked to it. For example, causes of hypertension during pregnancy include being obese, having diabetes, or being a teenager or older than 40, notes the source. Another cause of hypertension in pregnancy is preeclampsia. This is a serious medical condition that requires intervention.

Other risk factors for high blood pressure during pregnancy include kidney disease, carrying more than one child (for example, if you’re expecting twins), or if it’s a first-time pregnancy. Meanwhile, sources note that children born through In vitro fertilization (IVF) may be at higher risk of high blood pressure.

This is one area that you can change that could have a positive impact on your high blood pressure. Healthline explains a “heart-healthy diet” is vital in the quest to reach a healthy blood pressure level and avoid complications such as stroke or a heart attack.

These heart-healthy foods includes fruits, veggies, whole grains, and lean proteins such as fish, adds the source. Of course, controlling your intake of sodium and cholesterol can also help reduce risks (although salt is no longer regarded as the main culprit of diet-related high blood pressure, as outlined in this article from Medical News Today).

A sedentary lifestyle – as in, one where you mainly sit on the couch watching television shows, or spending 8-hours in an office chair without getting some short walks in – can increase your risk for high blood pressure.

Healthline says that regular exercise not only helps you lose weight – which is a risk factor in itself if you’re overweight or obese – it can also help you lower your blood pressure naturally while adding “strength to your cardiovascular system.” The source says you should aim to get about 150-minutes of “moderate” physical activity per week.

Some Medications Can Help

Healthline also explains that people often go through “a trial-and-error phase with blood pressure medications,” and that your doctor may prescribe different ones (or a combo of drugs) until you reach the safe range of blood pressure (with hopefully the least side effects).

That being said, the source says common drugs used to treat high blood pressure include beta-blockers that make your heart beat “slower and with less force,” which will in turn lower how much pressure is in your arteries. You may also be prescribed diuretics (also known as water pills) to rid your kidneys of excess sodium of fluids via urine. ACE inhibitors helps your body produce less of a chemical called angiotensin, which causes the narrowing of blood vessels and arteries. There are other options your doctor may suggest as well.