Causes of Fainting That Can Indicate a Serious Health Concern 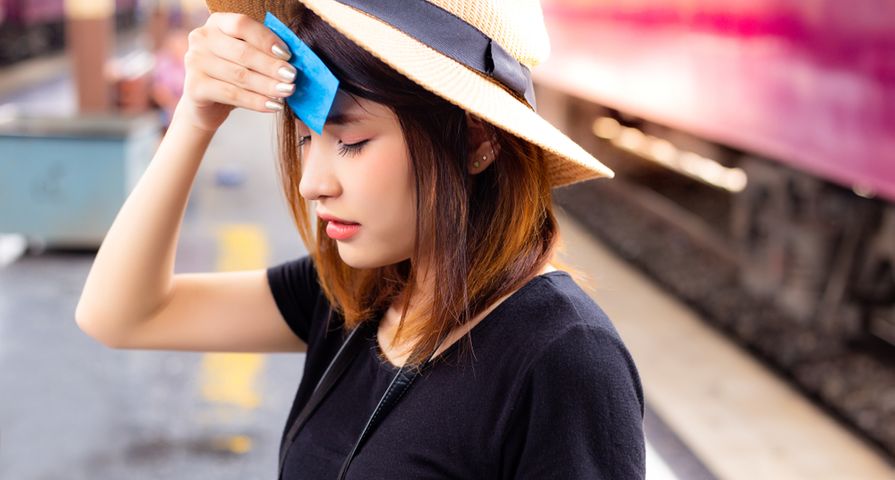 Most of us have been there before or at least come close. That feeling of lightheadedness that washes over us and makes our legs feel like jelly and our head get all fuzzy. In some cases it leads to a temporary loss of consciousness which is commonly referred to as fainting or passing out, but medically it’s called syncope. While most of the time syncope is not due to anything serious, it happens when there is a slight decrease in blood supply to the brain due to things like low blood pressure or low blood sugar, but there are times when it can indicate there is a more serious underlying health problem.

VeryWell Health explains that doctors typically divide the causes of syncope into two major categories: heart disease or non-cardiac causes. Luckily, a quick examination of medical history and a physical examination by a doctor should easily determine the cause of fainting and whether or not it was due to something more serious.

Most of the time fainting isn’t due to anything too serious, but VeryWell Health points out that there is a 1 in 4 chance that it’s due to a cardiac cause. There are two common heart problems that cause fainting, the first is due to an obstruction of blood flow through the heart. “An obstruction to the blood flowing through the heart can cause a drop in the amount of blood the heart is pumping, thus robbing the brain of sufficient blood flow,” writes the source.

There are several heart disorders that can cause this to happen. For example, it could be due to a heart valve disease like aortic stenosis and mitral stenosis, or hypertrophic cardiomyopathy which doesn’t allow the heart to pump effectively. It could also be due to an obstruction in a major blood vessel near the heart or a cardiac tumor. Cardiologists note that in addition to previous episodes of fainting, patients also complained of heart palpitations and chest pain. Bringing these concerns to your doctor’s attention right away, may help identify the risk of underlying cardiovascular disease much earlier.

An arrhythmia, or irregular heartbeat that’s either too slow or too fast, can lead to a sudden fainting episode. In fact, it’s quite common. It’s the other common heart problem to cause syncope. In this case, dizziness and fainting is often caused by not enough blood reaching the brain. According to VeryWell Health, a cardiac arrhythmia that causes fainting can also cause sudden death, especially if it goes on for several minutes. A cardiac arrhythmia happens in two different ways, it either slows down the heart or making it extremely rapid.

One of the most common slow heart arrhythmias is referred to as a bradycardia. It causes the heart to beat so slowly that the brain does not get enough blood which then causes fainting. “If bradycardia is thought to be likely to recur, effective treatment can be provided by inserting a cardiac pacemaker. Either sinus bradycardia or heart block can produce significant bradycardia,” writes VeryWell Health. On the other hand, a cardiac arrhythmia that causes the heart to beat too rapidly is called tachycardia. In this case the heart beats so fast it can’t possibly function properly. The source notes there are several different kinds of tachycardia but the most common are ventricular tachycardia and ventricular fibrillation. These are both life-threatening and can cause sudden death.

A doctor can usually determine if the fainting spell was due to a cardiac cause by doing a cardiac evaluation with either an echocardiogram, stress test, or other diagnostic procedure, says VeryWell Health.

3. You’re Having a Stroke

According to WebMD, dizziness and fainting accompanied by numbness, tingling, and muscle weakness may indicate a stroke. In this case, patients should always get emergency medical attention as soon as possible. (To learn more about the symptoms of a stroke, check out here).

Fainting and lightheadedness, as well as muscle tingling, numbness, and slurred speech can be an early warning sign of a transient ischemic attack (mini stroke or TIA) or an ischemic stroke if a blood clot in the brain is obstructing blood flow.

You’ve had the flu for what seems like days, and you’re not eating or drinking much, perhaps even vomiting and experiencing diarrhea, this can lead to a dangerous combination of low blood sugar and dehydration. If this is the case, it also leads to feeling lightheaded and possibly even at risk for fainting.

Both low blood sugar and dehydration (on their own or combined) can cause you to feel dizzy and even faint. In fact, physicians from Columbia University explain that illnesses where you’re not eating or drinking much can lead to dehydration and low blood pressure (remember blood volume is mostly water), as well as low brain glucose, which all make fainting more likely.

What to Know About a Transient Ischemic Attack or Mini-Stroke

Prescription medication is used to make us feel better, but in some cases it can cause other problems and even have dangerous side effects. Such is the case with certain prescription drugs used to treat chronic anxiety and pain (i.e., anti-anxiety and painkillers), which have been linked with side effects like dizziness and fainting.

For instance, anti-anxiety medications are meant to decrease blood pressure and heart rate to control anxiousness, meaning they can adversely affect the brain. An allergic reaction (i.e., anaphylaxis) to a medication may also cause a drastic immune response that causes blood pressure to plummet and you to become dizzy and faint. If you suspect anaphylactic reaction (accompanied by hives, itching, breathing difficulties, and airway swelling) call an ambulance immediately.

You may not be dehydrated due to an illness. However, rapid fluid loss—due to heat, lack of fluids, and excess perspiration—can often cause a dangerous fainting episode.  In fact, research shows that inadequate fluid levels in the bloodstream will cause blood pressure to drop, triggering telltale dizziness and even fainting to occur.

You may not consider dehydration a serious health concern, however, moderate to severe dehydration can quickly lead to a drop in blood pressure, muscle contractions, rapid breathing, weak pulse, convulsions, and even heart failure and hypovolemic shock.

Facts All Men Should Know About Heart Disease

When someone loses consciousness as a result of alcohol we tend to call it “passing out,” and while most of the time it doesn’t end up being serious, it can be. Very Well Health explains that alcohol has a sedation effect on our body which can cause us to lose control of our bowels and make a person urinate which could lead to dehydration. “It also dilates blood vessels, which decreases blood pressure. Combining those effects drains the brain and turns out the lights,” writes the source.

Another cause of fainting that can be serious is if it’s due to shock which can be life threatening. “Shock is a condition characterized by low blood pressure that often leads to a loss of consciousness. As a society, we are very aware of the long-term consequences of high blood pressure, but very low blood pressure is much more immediately dangerous,” writes VeryWell Health.

There are actually four types of shock, but in this section we will focus on hypovolemic shock, which is caused by too little blood volume. It could happen after a traumatic event like a car accident or any physical injury that causes a significant amount of blood loss. “People with shock will most likely become confused, then lose consciousness as their condition gets worse. It can all happen very quickly, and although it’s not fainting per se, we can’t really tell unless the patient wakes up,” says the source.

According to NHS, reflex anoxic seizure is a type of fainting that commonly occurs in children and causes them to have a seizure. RAS occurs when the heart slows down so much that it actually stops beating for about 5 to 30-seconds. NHS goes on to describe what might happen and explains that a child who is suffering from reflex anoxic seizure will likely open their mouth as if to speak, but nothing will come out. They’ll turn a pale grey color and lose consciousness. Afterwards their body will go limp or stiff and their eyes will roll upwards in their head and their fingers will become clawed. It could also cause their body to jerk uncontrollably.

“The seizure lasts less than a minute. Afterwards, the child will regain consciousness, but may appear sleepy and confused for a few hours,” writes the source. While these seizures are quite frightening to witness, especially for the parents, NHS says they are not dangerous or harmful. They should become less frequent as the child gets older.

Orthostatic hypotension is also sometimes referred to as postural hypotension and occurs when a person feels dizzy or lightheaded when standing up after sitting or laying down. In some cases it can cause a person to faint. The Mayo Clinic explains that in some cases the effect of orthostatic hypotension is mild and it only lasts for a few minutes, but if it lasts for longer than a few minutes, it can indicate a more serious problem. If this is the case, consult with a doctor to determine the cause.

The Mayo Clinic says “occasional (acute) orthostatic hypotension is usually caused by something obvious, such as dehydration or lengthy bed rest, and is easily treated,” but chronic cases can indicate another health problem.

Fainting rarely occurs due to metabolic causes, in fact, VeryWell Health says less than 1-percent of all syncope cases are found to be due to metabolic conditions. So what are metabolic conditions? These include hypoxia which is when there isn’t enough oxygen in the blood which means there is something serious going on like heart or lung disease. There is also hyperventilation which occurs as a result of severe anxiety or panic attack, and lastly it could be due to severe hypoglycaemia which is low blood sugar. This is common in diabetics.

It’s not often that fainting results due to a neurological cause. According to VeryWell Health this is the cause behind less than 1-percent of syncope cases. The source also goes on to explain that there are three main neurological conditions that can cause syncope. The first is transient ischemic attack which is when the “vertebrobasilar arteries are the blood vessels in the back of the neck, next to the spinal cord, that supply the brainstem — the portion of the brain that, among other things, is responsible for maintaining consciousness. A blockage of blood flow in the vertebrobasilar arteries can cause syncope.” The other two conditions are subclavian steal syndrome or normal pressure hydrocephalus (NPH).

Epilepsy is a neurological condition that is often confused with syncope because both cause a loss of consciousness. However, seizures are not caused by a disruption of blood flow, they are caused by abnormal electrical activity in the brain, says VeryWell Health. An obvious way to determine between the two is to distinguish if there were involuntary movements associated with the incident which seizures tend to cause. A doctor can give a more definitive answer after performing an electroencephalogram which basically records the brains electrical activity. It is extremely important to get the right diagnosis because the treatment for syncope and seizure disorders are vastly different. “Unfortunately, people with benign forms of syncope (usually young people) are all too often misdiagnosed as having a seizure disorder,” writes the source.