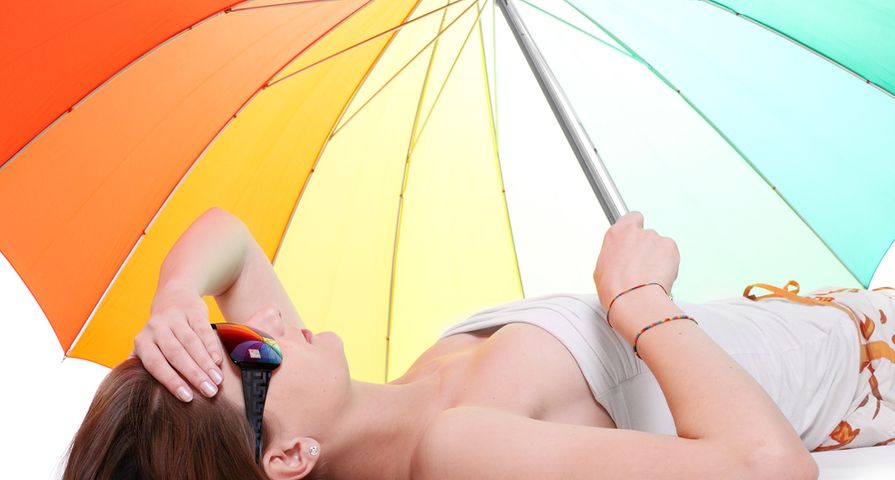 Heat stroke is a very serious and potentially dangerous heat injury that requires medical attention immediately. This is the most severe form of heat-related condition that stems from milder illnesses such as heat cramps and heat exhaustion. The medical definition of heat stroke is a core body temperature of 105-degrees Fahrenheit or higher combined with central nervous system complications resulting from overexposure to high temperatures.

If you’ve spent a lot of time in the sun and you’re experiencing any of the 14 symptoms below, it’s important to seek medical attention immediately.

Incredibly hot, red skin is one of the most popular signs of heat stroke. If your skin is hot to touch and you have an internal body temperature of 105-degrees or higher, you will need to see a doctor as soon as possible. Why does the skin turn red? According to Prevention, it means the body is trying to cool itself down. If you’re suffering from heat stroke, your skin will become red as your body directs blood flow toward the skin. A simple sunburn will also present this symptom (red, hot skin), but the situation becomes dangerous when your body temperature stays higher than 105.

In addition to experiencing red and hot skin, it might also feel clammy or extremely dry. This will depend more on what type of heat stroke you’re suffering from which we’ll further explain later on in this article.

In addition to an internal body temperature greater than 105-degrees Fahrenheit, dizziness and fainting are the next most common symptoms of heat stroke. These symptoms, along with nausea and vomiting will occur because the body is becoming dehydrated. If you’ve spent several hours in the sun and you experience this symptom, contact your doctor immediately.

Spending a day in the sun can be exhausting at the best of times, however, if you’re experiencing some of the other symptoms on this list along with extreme fatigue, it may be a sign of heat stroke. If this is the case, it’s always best to seek medical help, just in case your heat exhaustion has progressed into heat stroke.

Nausea is another indication that your heat exhaustion has progressed into heat stroke. A constant nauseous or uneasy feeling in your stomach (especially combined with dizziness) may mean your condition is worse than you initially thought. Drink lots of water to help treat the nausea and, as always, contact your doctor for assistance.

Feeling nauseous is one thing, but actually, vomiting is another. If your nausea has progressed into vomiting, this is a definite sign of heat stroke and it’s critical that you seek medical attention immediately. Drink as much water as possible on your way to seek help.

A rapid heartbeat after spending time in the sun can be an indication of a serious problem. The heart begins beating faster when it’s put under stress. The heart becomes stress in intense heat because “it needs to pump harder and faster to make sure your body’s natural cooling systems are working to keep your temperature balanced,” says Prevention. If you or someone you know begins experiencing any of the symptoms on this list, as well as a rapid heartbeat, you will want to make sure you get checked out immediately. When it comes to the heart, you don’t want to take any chances.

Individuals who have heat stroke often feel dizzy but mental confusion is also a popular symptom. If you’re having difficulty thinking, remembering, or focusing, it may be an indication that you’re suffering from heat stroke. According to Prevention, mental confusion is a common side effect of exertional heat stroke because it “throws your central nervous symptoms out of whack, so a lack of coordination, confusion, aggression, or the inability to walk are huge red flags.” The source also goes on to explain that it might look something like a concussion. The person is awake and seemingly okay, also known as “lights are on, but nobody’s home.” A good way to test whether this is happening is to ask them some questions and see if they can answer appropriately. If not, contact your doctor or seek medical help as soon as possible.

Seizures are a very serious (and very dangerous) symptom of heat stroke that requires immediate medical attention. This symptom often presents itself abruptly and offers few warning signs. If someone you know is having a seizure, get them to the hospital as soon as possible.

We’ve included lack of sweating and sweating profusely as two symptoms on this list, but how can that be? In order to understand this, you have to learn about the two different types of heat stroke: traditional and exertional heat stroke. Traditional comes on gradually and is more common among the young and elderly who cannot maintain their internal body temperature. In opposition, exertional comes on suddenly and is more often seen in people who work out or play sports in extreme heat.

If a person is suffering from traditional heat stroke, they will not sweat. This is because when a person spends a long period of time in the heat, their body stops trying to regulate its core temperature. Because the body’s way of regulating its temperature is through sweating, the body will stop producing sweat.

“I’ll commonly hear people say, ‘I know it’s not heat stroke because they are still sweating’ and that’s not true,” says Luke Pryor, Ph.D., ATC, CSCS, the director of elite athlete performance at the Central California Sports Sciences Institute, who also researches the effects of heat on athlete safety and performance. He went on to tell prevention: “With exertional heat stroke, many times we see the individual well before they’ve ‘cooked’ themselves and the body is still trying to thermoregulate [maintain its core internal temperature]. If anything, you’re actually going to see the individual sweating profusely.”

If you’ve spent time in the sun and you’re experiencing a severe headache, you may be suffering from heat stroke. It’s common for individuals to have a slight headache after spending time outdoors in the summer, especially if they haven’t been drinking an adequate amount of water. A severe headache combined with at least one other symptom on this list is an indication you need to seek medical attention immediately. “This symptom is typically due to dehydration, or the overall impact heat stroke has on the central nervous system,” says Prevention.

On the flip side, if someone is experiencing other symptoms on this list, but measuring with a lower temperature, you should still work toward cooling them down and getting them medical care. “Someone might have a body temperature of 106, but if you get an oral temperature, they might only be 100 degrees,” warns Pryor while talking to Prevention. “You might think they’re just a little warm when, in fact, they’re dangerously hot.”

WebMD and Mayo Clinic both list rapid, shallow breathing as another scary symptom of heat stroke. If this happens, be sure to remove any heavy or tight clothing they are wearing and call 911 immediately.

Loss of consciousness is uncommon but could occur in a severe case of heat stroke. It’s listed as one of the more serious and very real symptoms associated with heat stroke. It’s important to note that this symptom could go hand in hand with mental confusion since Healthline lists “loss or change in consciousness” as one of the main symptoms. Be sure to call 911 immediately if someone losses consciousness due to any heat-related illness, or begins vomiting, or having seizures.