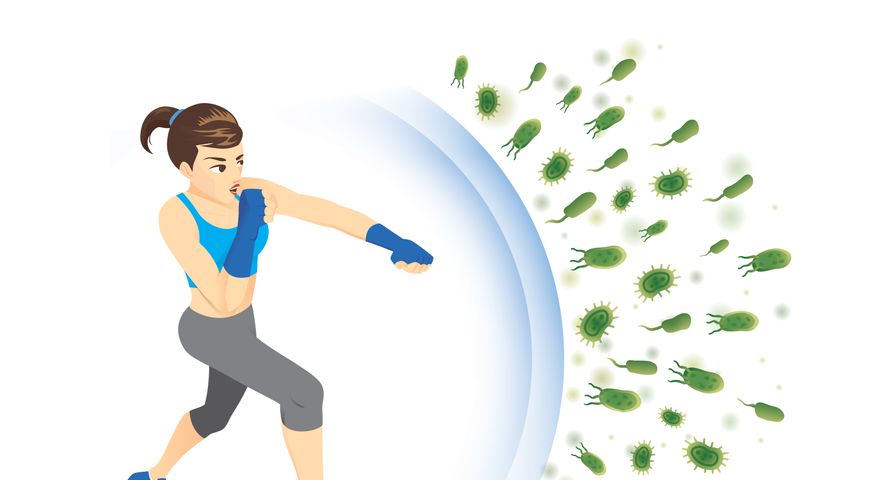 There are several methods to treat an illness once you become sick, but what if there was a way to avoid becoming sick in the first place? While there is no 100-percent effective formula for avoiding common ailments like the flu, there are ways to help galvanize your immune system.

Raising your immunity doesn’t require any magic potions or spending hours in a hyperbaric chamber; it can actually be raised effectively with changes in your lifestyle and diet. Here are seven relatively simple ways to increase your body’s natural “shield” against bugs…

This tip shows up a lot in health articles, and there’s a good reason for it. Not only is puffing away on tobacco linked to potentially fatal cancers and heart disease, it can also depress your immune system and leave you more vulnerable to other illnesses, according to LiveStrong.

Continuing to puff away suppresses antibodies created by your body to fight invaders, leaving you at higher risk of ailments such as respiratory infections and even the common flu, noted the source. The good news here is that if you quit smoking, your body’s “soldier” cells will start returning in greater numbers.

Exercise can make you feel better naturally by increasing endorphins, while also helping you shed excess fat. However, a side benefit of physical activity is that it may help flush bacteria from your airway and lungs, according to an article posted on the U.S. National Library of Medicine.

It also notes that exercise “changes” antibodies and white blood cells in your body, causing them to move around your system faster and therefore they might detect the early development of illnesses. The rise in body temperature from working out can also help kill off bacteria, added the article.

Thanks to vitamin-rich content, certain fruits and veggies can help protect you against common colds and other annoying ailments. Best Health magazine suggests four fruits in particular to help kick your immune system into high gear.

Those fruits include kiwi, blueberries, papaya, and strawberries – and luckily, they’re all delicious. The best immune-boosting vegetables to consider include “cruciferous vegetables”, which include cauliflower, cabbage, broccoli, and other leafy greens. If they don’t taste great to you, look for recipes to boost flavor.

We’re not saying you can’t have a glass of wine with dinner, but if you’re having a few more glasses after that every night, it’s time to reconsider. Not only is alcohol a prime way to pack on pounds (and being overweight is taxing on your immunity), binge drinking may suppress your body’s natural defenses, according to WebMD.

The online health source cites a study that shows even one night of over drinking can have a detrimental effect on your immunity. If you have the beginnings of a sickness, the alcohol can actually make it worse, noted the article. What is binge drinking? It’s defined as five or more drinks for men and four or more drinks for women in a 2-hour time frame.

Not only will lack of sleep make you irritable, less effective at daily tasks and possibly into a coffee addict, it can make your immune system tired too, according to the Mayo Clinic. Proteins released during sleep called cytokines help promote rest, but also are important in fighting infections and reacting to stress, according to the source.

The clinic also notes that not getting enough quality sleep can make you more susceptible to viruses such as a cold. When they say you should rest when you’re sick, listen to them; the clinic also states that lack of sleep can slow down recovery. (For more help, here are some Tips for a Better Night’s Sleep).

Harvard Medical School explains that while hundreds of types of bacteria live in your gut that aid digestion, there are newer findings that show these helpful gut bacteria have a link to immunity.

There is evidence that certain gut flora can help develop T cells, a type of white blood cell that is integral to how your system responds to bacterial and viral threats. While it’s not fully understood how this interaction between the gut and immunity works, consuming probiotics – as in, good bacteria – can have a positive impact. Look at yogurt, some cereals and certain energy bars. (Here are some more Benefits of Taking Probiotics).

If you’re under a lot of stress at work or home, then it might be time to lessen the load and book a trip to the beach. Stress has all kinds of negative effects on you, and your immune system isn’t… well, immune to it either.

A posting by the American Psychological Association has a very black and white headline of “Stress Weakens the Immune System”. These findings have apparently been known for some time, as the article mentions studies that began in the 1980’s showing that students taking exams in school over a 3-day period actually had lowered immunity counts.