The Incredible Health Benefits of Cucumbers 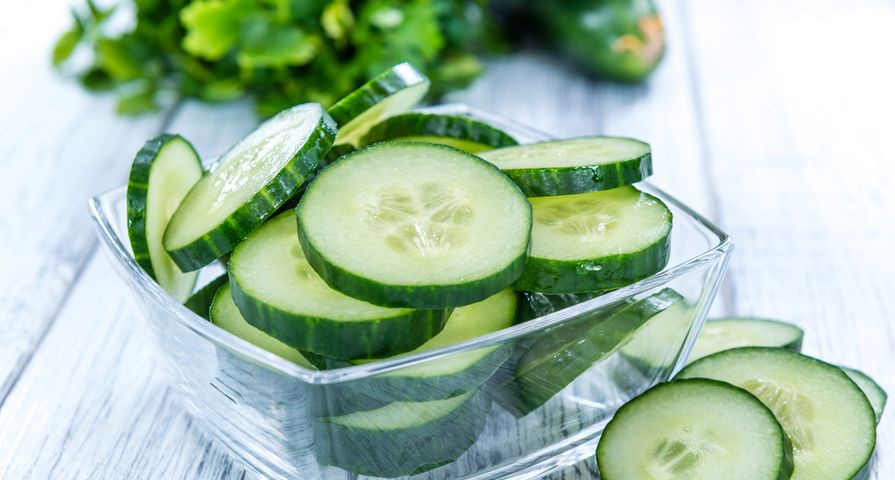 Cucumbers are cool – in more ways than one. Not only are they a nutritious and light addition to salads (not to mention being tasty), they carry a lot of health benefits.

While they deliver many essential vitamins and nutrients, they’re also good for your skin and can help keep you regular, according to the Huffington Post. So let’s get chopping on 13 ways a cucumber is beneficial for you…

Light on Calories, Heavy on Nutrients

Meanwhile, that same 300-gram cucumber (unpeeled) has no fat, 11-grams of carbohydrates, and just 45-calories, adds the source.

These antioxidants help regulate “free radicals” in your system that have been linked to cancer risk. According to Dr. Axe, “Several bioactive compounds have been isolated from the nutritious cucumber,” which include cucurbitacins, glucosides, lignans, and apigenin.

These, along with a flavanol called firestin, have been shown to have “strong cancer-fighting abilities” through protecting DNA and cells from “oxidative stress,” notes the source. Certain antioxidants have been shown to kill off cancer cells, it adds. (Here are more Super Antioxidant Rich Foods).

Dr. Axe also notes that cucumbers are a friend to the digestive tract, and help cleanse the liver that is responsible for filtering out potentially harmful substances you ingest.

Cucumbers help the digestive system by “removing accumulated toxins and waste materials from the blood and gut,” according to the source. Cucumbers are also a natural diuretic, meaning it will help your body eliminate more toxins through waste excretion. While the liver can generally do all this on its own, it doesn’t hurt to have a friend to aid in the process.

Hydration is always important, especially in the summer months in the U.S., as running low on liquids can have some pretty dire symptoms.

As well as containing all those great nutrients and antioxidants, cucumbers also contain about 95-percent water according to the Huffington Post – so eating them is almost like drinking a glass of water. One 5-ounce serving of cucumbers has 4.8-ounces of water, which is about 26-percent of your daily intake of water through food, adds the source.

Fiber has a number of other benefits, which we’ll get to. Try to aim to get around 25 to 30-grams of fiber per day – and remember, the fiber in cucumbers is in its skin, so peeling them won’t give you any.

If you’re having trouble with – err, your business in the bathroom – then eating cucumbers may be a good way to help things go a little more smoothly.

If you’re a diabetic, then you might want to consider adding cucumbers into your diet. That’s because cucumbers may help reduce blood sugar levels “and prevent some complications of diabetes,” at least according to animal and test-tube studies, says Healthline.

“One animal study examined the effects of various plants on blood sugar. Cucumbers were shown to effectively reduce and control blood sugar levels,” it notes. However, it admits more research is needed to confirm the blood sugar benefits for humans.

The Health Benefits of Pomegranates

Dr. Axe says cucumbers are 1-of the top alkaline foods that helps keep the body’s pH levels in check, “and counteract the effects of an acidic diet.”

Balancing “acid-forming” foods such as fried foods, sugars and refined carbs can help protect you from diseases “that thrive in an acidic entrainment,” it adds. Acidity can be linked to problems with bone health, for example.

Bone Up on Vitamin K

Huffington Post says that cucumbers contain a high level of vitamin K – in fact, it says 1-cup contains 22-percent of the RDI. “This vitamin is essential for bone health, as low vitamin K intakes have been associated with a higher risk for bone fracture,” it explains.

In addition, vitamin K also helps your body absorb calcium, says the source, which we all know is good for your bones and teeth. Vitamin K is also an important factor for blood clotting, essential if you get cut or injured.

Dr. Axe says something called lignans found in cucumbers have anti-inflammatory properties “that are beneficial for fighting cardiovascular disease.”

Studies show that these dietary lignans show a lowering of low-density lipoprotein (LDL) cholesterol levels, also known as the “bad” cholesterol, and more regulated blood pressure levels, says the source. It adds that important minerals such as potassium and magnesium in cucumbers also contribute to heart health. (Here are more Foods That Can Help Boost Heart Health).

Benefits Beyond The Skin

Cucumbers – particularly fresh cucumber juice – can hydrate and soothe angry skin, according to Dr. Axe. As well as getting benefits from ingesting cucumber, you can also place cucumber slices directly to your skin for a cooling effect, while reducing swelling and redness, it adds.

The source says if you’ve got a nasty rash courtesy of the sun, then cucumbers are a great sunburn remedy to consider. It notes cucumbers have the ability to “reduce heat buildup associated with inflammation,” as well as fight sunstroke at the same time. One source suggests making a paste from chilled cucumbers using a blender, and applying it to the affected skin. (Here are more Foods That Keep Your Skin Looking and Feeling Healthy).