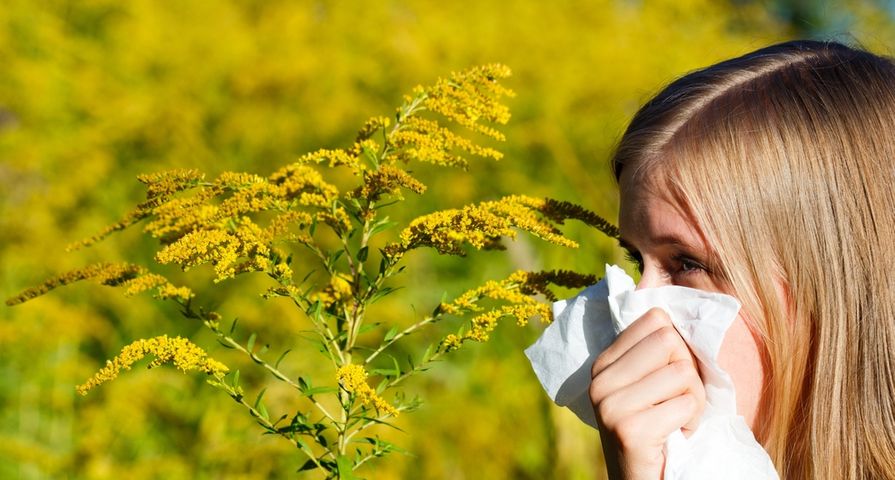 Stuffy and runny nose, sore throat, headache—these can be the symptoms of a nasty cold. But they can also be a sign that one is struggling with allergies. Often, these allergies are triggered by plants in our environment, from flowers (like chamomile, chrysanthemums, daisies, and goldenrod) to shrubs (like cypress, juniper, and wisteria), trees (like beech, birch, and cedar) and grasses (like fescue, Johnson, and June).

It can be helpful to become familiar with these plants and develop a strategy for alleviating your symptoms. So, let’s get started with a list of the top ten plants known to cause allergy problems…

Ragweed is quite possibly the most problematic plant for allergies. Unfortunately, it can be found just about anywhere—from fields to riverbanks and roadside ditches. Stateside, it’s most prominent in the Midwest and Mississippi River basin, but it’s hardly restricted to those regions. According to the American College for Allergy, Asthma, and Immunology, the worst time for ragweed is the summer and fall.

The best strategy for dealing with a ragweed allergy is to avoid the plant altogether. You can also take medicine, prescribed by a professional allergist, to help relieve symptoms. Some people will need to get allergy shots because it can be extremely difficult to avoid ragweed.

Mountain cedar—which, as you might expect is most prominent in mountainous areas in Arkansas, Missouri, New Mexico, Oklahoma, and Texas—is a less well-known problem for allergy sufferers. Its peak time is in the spring, according to the Texas Med Clinic. People struggling with a mountain cedar allergy will experience a stuffy nose and sore throat.

People dealing with cedar allergies should stay indoors and, if possible, keep doors and windows closed. That means running the air conditioner to stay cool in the summer. Another good idea: dust the home regularly and take frequent showers.

Ryegrass, which can be found in lawns, meadows, and pastures throughout the northern half of the United States, is most problematic in spring and summer. Like other grasses, it’s often problematic for allergy sufferers, particularly after it has been cut. That’s because, as a lawn or pasture is cut, mold and pollen are released into the air.

Experts say that people struggling with a ryegrass allergy should avoid outdoor activities during flowering season. Antihistamines, which reduce rhinitis symptoms, are also useful in combating the issue. An allergist may also prescribe a nasal steroid to help relieve allergy symptoms.

Maple can be found just anywhere—from along streams and in woods to the Canadian national flag! It’s most prevalent in the eastern United States and Canada and becomes most problematic for allergy sufferers in the early spring months. Once again, the central problem is pollen, which can cause an adverse reaction by the human body’s immune system.

Symptoms vary, but often include itching, sneezing, wheezing, and headache. People struggling with this allergy should ask their allergist about using an antihistamine or bronchodilator. A nasal steroid may be particularly useful when dealing with this type of allergy.

Elm, which can be found in cultivated and wetland habitats, is most prevalent in the eastern United States and Midwest. There are two types that are particularly problematic, including American Dutch elm (which strikes most fiercely in spring), and lace bark elm (which is most troublesome in the fall). The good news, from an allergy sufferer’s point of view, is that many of these trees were wiped out by Dutch elm disease, though unfortunately the tree is starting to make a comeback.

As with other allergies brought on by the spread of pollen, research from Web MD shows that the elm tree allergy can be combated with over-the-counter and prescription medication, both of which should be approved by an allergist. Allergy shots may also be prescribed for people with this allergy.

The mulberry plant is often found in forests and along river valleys. It’s detectable by its berries, which are red and black and resemble raspberries. It’s most prevalent in the eastern United States and becomes most problematic for allergy sufferers in the winter, spring, and summer months. The good news: the berries are delicious and can be eaten raw or cooked. The bad news: this plant can be a nightmare for allergy sufferers, according to scientists at Thermo Fisher Scientific Inc.

Mulberry plants can be particularly problematic for people with asthma and allergic rhinitis. An allergist will most often prescribe antihistamines or allergy shots to help alleviate the symptoms associated with a mulberry allergy.

For many of us, there’s nothing more delicious than a slice of pecan pie. But for some people this plant, which can be found in woods and orchards throughout the western and southeastern sections of the United States, can present huge allergy problems. According to research from Web MD, Its peak time is spring and it produces a pollen similar to that found in ragweed.

If you think you have a pecan pollen allergy, avoid contact with the plant and get yourself tested by an allergist. He can help treat the problem with over-the-counter or prescription medication and allergy shots.

The oak tree can be found in forests from Florida to Virginia and Texas. Its peak time is spring, during which time it produces a potent amount of pollen. In fact, oak trees are known to produce more pollen than any other plant.

The pollen produced by the oak tree can result in stuffy nose, watery eyes, and sore throat. Common treatments, outlined on Livestrong.com, include antihistamines, eye drops, and decongestants. Immunotherapy, which can desensitize an individual to the effects of oak tree pollen, may also be prescribed by an allergist to combat the issue.

Pigweed can be found just about anywhere – even in the lawns and roadside gardens of the city. It’s widely prevalent across the western and northern parts of the United States, which means it can be virtually impossible for allergy sufferers to avoid. Worse still, it’s a problem from spring through summer and into fall.

There are a number of treatments, as stated on Web MD, for a pigweed allergy, from decongestants to antihistamines. Sufferers of this allergy may also want to consider corticosteroid nasal sprays (like Nasacort and Flonase), eye drops, and nasal irrigation.

Once again, the central problem is the spread of pollen. Residents of the southwest who feel as though they may be coming down with the flu may want to get themselves tested for an Arizona cypress allergy, which can be treated with allergy shots, antihistamines, and decongestants.