The Health Benefits of Dry Brushing 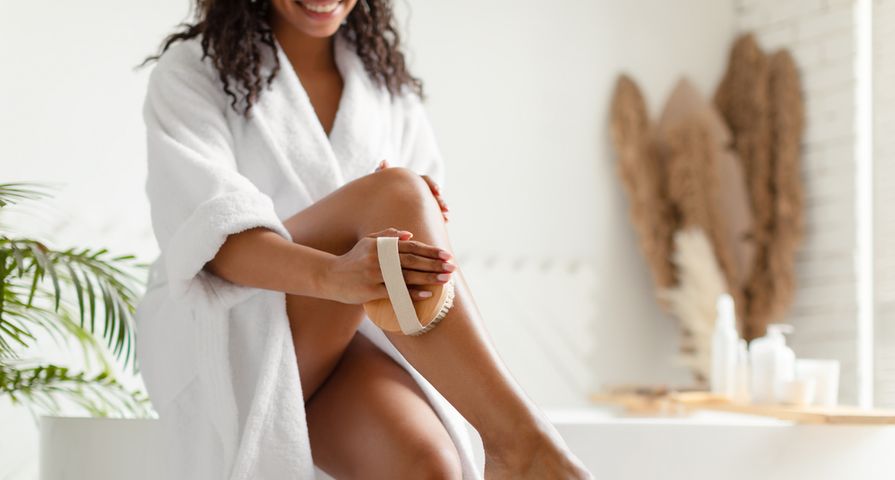 If you like to take care of your skin, chances are you’ve at least heard about dry brushing. Thanks to the wellness movement, dry brushing is more popular than ever but it’s actually been practiced for centuries in many different areas around the world.

Dry brushing is a form of exfoliation that many believe is the key to more youthful and beautiful skin. But are these claims true? Let’s take a closer look at what dry brushing actually is, its potential benefits, and how you can start doing it!

What Exactly Is Dry Brushing?

Before we dive into all the potential benefits of dry brushing it’s important to first explain what it is. In short, dry brushing is what it sounds like. You apply a brush (typically a firm brush with natural bristles) to your skin and gently massage the brush in upward motions.

May Benefit the Lymphatic System

The lymphatic system is one of the many amazing systems of the body. It helps fight off infections by filtering fluids. Unfortunately, when we’re exposed to toxins or fall ill, the system can become clogged. Luckily, dry brushing may be able to help!

Some say dry brushing can help your body release toxins through sweat. The bristles may help stimulate your pores and open them up. Healthline says, “this makes it easier for the body to sweat, which in turn reduces the number of toxins flowing through the lymphatic system.”

Another potential benefit of dry brushing is that it can promote blood circulation. This also plays a role in lymphatic drainage. Dermatologist Shilpi Khetarpal, MD tells Cleveland Clinic, “it also helps detoxify your skin by increasing blood circulation and promoting lymph flow/drainage.”

If you’ve ever noticed that your skin turns red, don’t fret this is normal. It’s simply a sign of inflammation that occurs when there is an increase in circulation.

Exfoliating your skin regularly should be a part of everyone’s skincare routine. Not only does it help improve the appearance of your skin making it look brighter, but Healthline says, “regular exfoliation can also help prevent clogged pores, resulting in fewer breakouts.”

Luckily, one of the benefits of dry brushing is exfoliation. The coarse bristles on the brush help brush away dry cells which help make your skin feel more soft and smooth.

Another benefit of dry brushing is you may find it very relaxing, similar to a massage, says Healthline. If you want to make the most of it, be sure to practice dry brushing in a relaxing environment, such as a dark and quiet place.

Other ways to make your environment relaxing are by playing soft music, lighting a candle, or diffusing essential oils — whatever is most relaxing to you.

May Reduce the Appearance of Cellulite

First, it’s important to point out that cellulite is a “very common, harmless skin condition,” says Mayo Clinic. It doesn’t require treatment but if you’re concerned about its appearance there may be various methods you can try to reduce the appearance of cellulite, including dry brushing.

Byrdie says, “Many swear their cellulite is less noticeable after dry brushing, due to [the] temporary plumping effect it has on the skin.” Though there is no scientific data to prove that dry brushing gets rid of cellulite for good, it is an inexpensive method worth trying.

Are There Any Risks?

Dry brushing is generally safe for anyone, however, some people should proceed with caution. Any individual with inflamed skin (such as psoriasis or eczema) should avoid dry brushing over the affected area.

Further, if you have an open wound, never dry brush over the area. This is because you’ll increase your risk of infection to the wound.

What Do I Need for Dry Brushing?

So, if you’ve read this list of potential benefits and are eager to start dry brushing, the first thing you’re going to need is a brush. When purchasing a dry brush, you’ll want to look for a brush with natural fiber bristles.

You may also want to look for a brush that has a long handle. This will ensure you can reach all parts of your body. Luckily dry brushes are typically inexpensive (usually under $10) and can be found online, at your local drug store or health food store.

How to Start Dry Brushing

Dry brushing is easy to do and only takes a few simple steps. When first starting, it’s recommended that you start light brushing but as you get used to it you can begin to increase the pressure. The following steps are how to start dry brushing:

What to Do After Dry Brushing

After dry brushing, it’s recommended that you take a cool shower to rinse off dry skin cells. Next, dry your skin with a towel and then moisturize your skin with your favorite natural moisturizer.

Finally, if you plan on spending time in the sun after your routine, be sure to apply sunscreen. While sunscreen is always important, Byrdie points out  “the process can make your skin more sensitive to the sun.”

How Often Should I Dry Brush?

So now that you know how to do it, how often should you dry brush? Dermatologist Jeanine Downie tells Byrdie, as a general rule of thumb you should practice dry brushing no more than once or twice a week.

Ultimately the frequency can be left up to you to decide. After all, you know how your skin feels and the strength of your skin.

How to Take Care of Your Brush

One vital step you shouldn’t forget is to take care of your brush. It’s important to clean your brush regularly to prevent bacteria. After all, you are applying the brush to your skin regularly.

Cleaning your brush is easy! For starters, you should rinse your brush after each brushing routine. Allow it to dry in a sunny area. You should also thoroughly clean your brush at least once a week using mild soap and water. Finally, it’s worth mentioning, don’t share your brush with anyone to prevent your risk of infection.