Home » Your Health » Signs and Symptoms of Psoriasis

Signs and Symptoms of Psoriasis 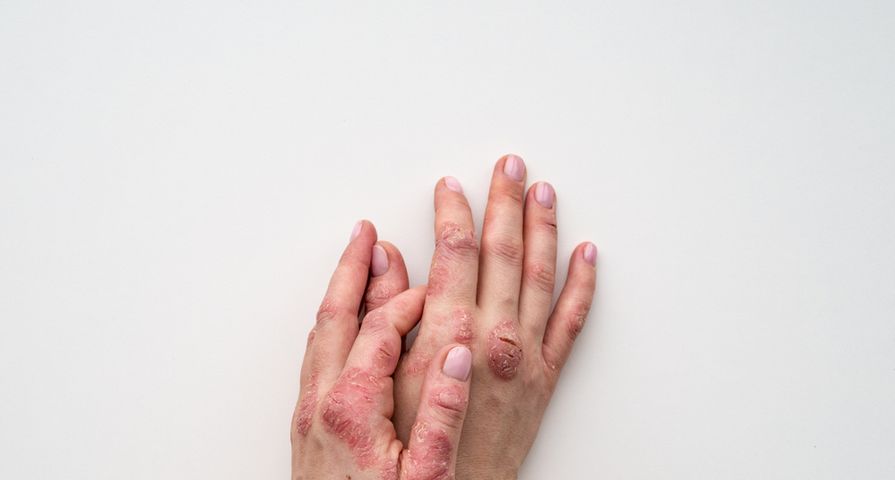 Psoriasis is a chronic inflammatory condition that affects the skin, nails, and joints causing skin cells to multiply 10 times faster than normal. According to a study published in the Journal of the American Academy of Dermatology, around 7.4 million Americans are living with psoriasis. While there is no current cure for psoriasis, there are many ways to manage the symptoms and stop the cells from growing so quickly.

Most of these treatments are lifestyle changes such as using moisturizer, stress management techniques, and quitting smoking. However, there are also some topical treatments and medications. First, let’s take a look at some of the signs and symptoms of psoriasis…

Psoriasis is a chronic, intermittently relapsing inflammatory disease characterized by pink scaly rash on the skin often covered with white thick scale. The cause of psoriasis is complex and not 100-percent understood. There is very much a genetic risk factor along with possible environmental factors that trigger the onset of disease.

Psoriasis can occur anywhere on the body, but it typically develops on joints such as elbows and knees. It can also occur on the hands, feet, neck, scalp, and face, says Healthline. Psoriasis has been linked to other chronic conditions such as metabolic syndrome, heart disease, and obesity.

Plaque psoriasis is the most common type. It causes “red, inflamed patches” that are often covered with silver scales or plaques, says Healthline. Guttate psoriasis is a common childhood form of psoriasis that results in small pink spots on the torso, arms, and legs.

The most common symptom of psoriasis that appears in almost every type of psoriasis are red patches. In plaque psoriasis (which accounts for approximately 80-percent of all psoriasis cases) these red patches often become inflamed and covered in silver scales. Healthline notes that some people may experience some soreness around the patches, as well.

These red patches can vary in size. For one person it may be as small as a few flakes on their scalp or elbow, adds the source, whereas another person may have it covering the majority of their body.

Inverse psoriasis causes smooth patches of red and inflamed skin and erythrodermic psoriasis can cover the entire body in a red peeling rash that burns and itches intensely, says the Mayo Clinic.

Effective Tips for Dealing with Psoriasis

Plaque psoriasis is the most common form of psoriasis. It has a very distinct appearance and this is largely due to the scaly patches that appear. These scaly patches are a buildup of dead skin cells. They often appear as raised, red patches covered in white or silver scales.

“Typical psoriatic scales are whiteish-silver and develop in thick, red patches,” writes Healthline. “Sometimes, these patches will crack and bleed.” It’s also not uncommon for the skin around these scales to become red, inflamed and itchy.

The American Academy of Dermatology informs that it’s common for plaque psoriasis to become itchy during a flare-up. This itchiness will occur around the red patches.

It’s important to resist the urge to scratch because scratching can cause the patches to thicken, says the source. It can also cause the skin to crack and bleed.

The buildup of excess skin is not only scaly, but also dry. This is why one of the easiest and effective remedies for psoriasis is to moisturize. The skin may become so dry that it cracks and bleeds.

Psoriasis can cause painful swollen and stiff joints. This symptom is often associated with psoriatic arthritis which occurs in about 30-percent of people diagnosed with psoriasis, says the National Psoriais Foundation.

More often than not, psoriatic arthritis goes undiagnosed, particularly in people who have mild symptoms. However the source warns to be mindful of the symptoms associated with psoriatic arthritis because it’s important to received treatment early on to avoid permanent joint damage.

People with psoriasis may experience changes in their nails such as thick, pitted, or ridged nails. As you may have guessed nail changes are common in nail psoriasis which affects the fingernails and toenails.

“Psoriatic nails might loosen and separate from the nail bed [also known as onycholysis],” writes the Mayo Clinic. “Severe cases may cause the nail to crumble.”

“It generally develops quickly, with pus-filled blisters appearing just hours after your skin becomes red and tender,” writes the source. “The blisters may come and go frequently. Generalized pustular psoriasis can also cause fever, chills, severe itching and diarrhea.”

Pink spots are fairly unique to guttate psoriasis which is most common in children and young adults. “It’s usually triggered by a bacterial infection such as strep throat,” writes the Mayo Clinic.

Guttate psoriasis can appear anywhere on the torso, as well as the arms and legs. While it often shows up as small pink spots in the shape of water droplets, scaling lesions similar to those in plaque psoriasis can also accompany these pink spots.

The symptoms may reappear or come back even worse due to a psoriasis trigger such as stress, alcohol, cold weather, injury, medication, or infection. Healthline explains that when a person has no “active” signs of the condition, it may mean they are in remission. This doesn’t mean the symptoms will never come back, it just means you’re symptom free at the moment.

If you suspect that you have psoriasis, visit a doctor to receive a proper and full examination. You should also consult with a doctor if you’re experiencing any discomfort or pain, joint problems such as pain, swelling or difficulty performing daily tasks, says the Mayo Clinic.

Another reason to go see a doctor would be if any of the previously listed signs and symptoms get worse over time or don’t improve with treatment. The problem may be that you need different medication or a different combination of treatments to help manage the symptoms, adds the source.