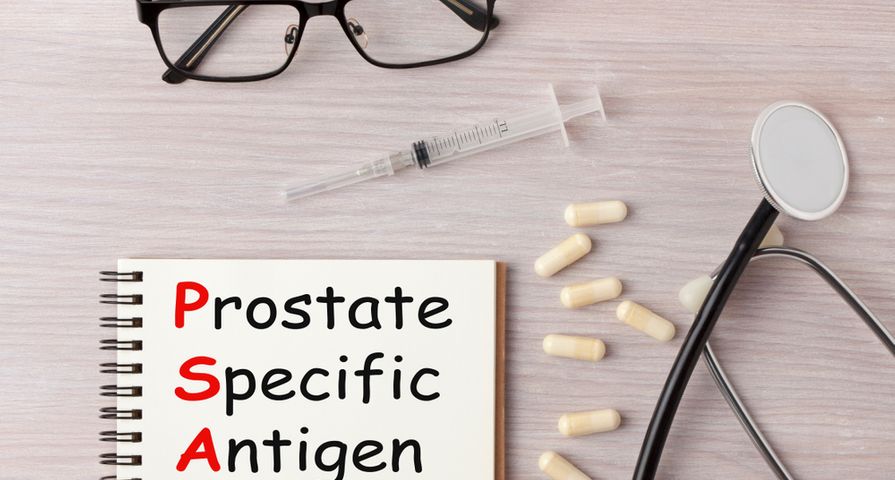 A PSA test is a time-tested way for doctors to determine if a patient has prostate cancer, but that’s not always the case if PSA numbers are higher than usual (there can be other conditions that cause this). The prostate specific antigen is a protein found in the blood that can indicate the presence of the disease early, as well as determine if treatments are working.

Prostate cancer is most commonly found in men above the age 40 (1 in 8-men will be diagnosed at some point according to the American Cancer Society). According to the source, it’s also the second leading cause of cancer-related death in the country among the male population (second only to lung cancer). That’s why considering screening is important.

Here’s everything you need to know about the testing.

When Should Screening Start?

According to ZeroCancer.org, you should discuss risks and benefits of the PSA test with your physician if you’re between 45 and 75-years old (some sources argue that 40 should be the starting age if you have certain risk factors that we’ll explain). It also notes you could have a “baseline” PSA test to see if your current levels are within normal range and whether further investigation is required.

Meanwhile, the source says if you’re older than 75, you can still decide with your doctor’s help whether the test makes sense for you. In both age groups, there might also be a digital rectal exam (DRE) to consider that can be a diagnostic aid.

What Happens Next if PSA Levels are High?

According to the same site, if you’re between 45 and 75 and your PSA levels are lower than one nanogram (1 ng/mL) and the DRE doesn’t show any red flags, you can repeat testing every 2 to 4-years. Between 1 and 3-ng/mL with a normal DRE means you should do the test annually or biannually. If it’s over 3-ng/mL, or if the DRE reveals red flags, then your doctor may want to look further sooner, it adds.

For those in the over 75-group, you should continue to get tested every 1 to 4-years if your reading was under 3 ng/mL and the DRE was normal. For results higher than that or if the DRE “is very suspicious,” you may need more testing, it adds.

What Can One Expect During a PSA Test?

The Prostate Cancer Foundation says that the test itself is relatively simple, noting a “small amount” of blood is drawn from the arm to be analyzed at a lab. The levels of PSA will then be determined, but the source notes that a high reading isn’t necessarily a positive for prostate cancer. In fact, in some cases men with lower than normal readings may have the cancer, it adds.

It explains that the PSA test is just the beginning to establish whether further screening is warranted. That could include the DRE if it wasn’t administered at the same time as the PSA test, says the source. There could also be an MRI to examine the prostate itself, as well as determining PSA density and velocity (rate of increase) before deciding on a biopsy, it adds.

There Can Be False Positives

If your reading is higher than expected, don’t panic. Health.com explains that false positives can happen, and there are a number of factors that can contribute to this. For example, it says swelling of the prostate gland, infections, as well as recent sexual activity could be factors in elevated levels (PSA is mostly present in semen).

The site notes that one of the most common conditions among men that produce a high PSA reading is benign prostatic hyperplasia, which is an enlarged prostate that’s not the result of cancer. Other sites notes that riding a bike or using supplements that affect testosterone can also produce an abnormal result. The doctor may try treating suspected conditions and monitor the levels.

There Are Certain Risk Factors for High PSA

Your doctor will also take other possible factors into consideration for further testing if your PSA is higher than normal, explains Health.com. For example, it says black men are more prone to prostate cancer than white/Hispanic men.

It also says that age also increases prostate cancer risk, which a physician will also take into account. If you have a close family member who has/had prostate cancer, there could be an increased risk, adds the source. However, if you have no added risk factors, a doctor may decide on a follow-up PSA test to compare rather than jumping to the biopsy, it adds.

What Does a Low PSA Reading Indicate?

We’ve already told you that in some cases there could be cancer present even with low or normal PSA (WebMD says the latter can be the case fairly often). However, “In general, a low PSA is a good result,” notes ZeroCancer.org.

It does note that there are contributing factors to an “artificially low” result, and they include taking medications to control cholesterol (statins), as well as anti-inflammatory drugs. The source also notes that obesity can cause readings to be low, as body fat reduces how much PSA runs free in the blood.

PSA Velocity is an Important Factor

Having a baseline PSA test and then being tested as recommended by a doctor (which could be annually) can help determine how quickly PSA levels are rising, explains ZeroCancer.org. The source says a rapid increase in PSA can be an indicator that cancer is present, and can also be “especially useful to find prostate cancer in early stages before the cancer has left the capsule of the prostate.”

The source cites research that suggests a rise in PSA of 0.75-ng/mL per year is an “early indicator” if the overall reading is 4.0-or higher. It warns that a spike of 2.0-ng/mL might indicate a more aggressive prostate cancer that is potentially deadlier.

Are There Any Risks With a PSA Test?

WebMD says that there are some doctors that aren’t on board with administering a PSA test. One of the reasons for this, it says, is that the test often finds small tumors that aren’t life threatening – and the related treatments can open you up to unpleasant side effects and possible complications.

It also notes that because there’s the chance of a false positive, as we have already mentioned. This can lead to psychological suffering as well as “medical procedures you don’t need.” The same goes for if your levels read low but you do in fact need treatment. However, we suggest following screening guidelines from the medical community.

There are many reasons to consider having the PSA test, especially if you have risk factors or have symptoms of prostate cancer. WebMD says the results of a PSA test can help your doctor determine how advanced the disease is, and what treatment options are available.

After you’ve received treatment, a follow-up PSA test can help measure the success of radiation or surgery (as well as hormone therapy), it adds. Falling levels suggest the cancer is gone, but a steadily rising level can mean that cancer cells are still hanging around uninvited, it adds. “If you choose a watchful waiting approach to treatment, your PSA level can tell your doctor if the disease is progressing. If so, you’ll need to think about active treatment,” notes the source.