The Dark Science Behind Nightmares 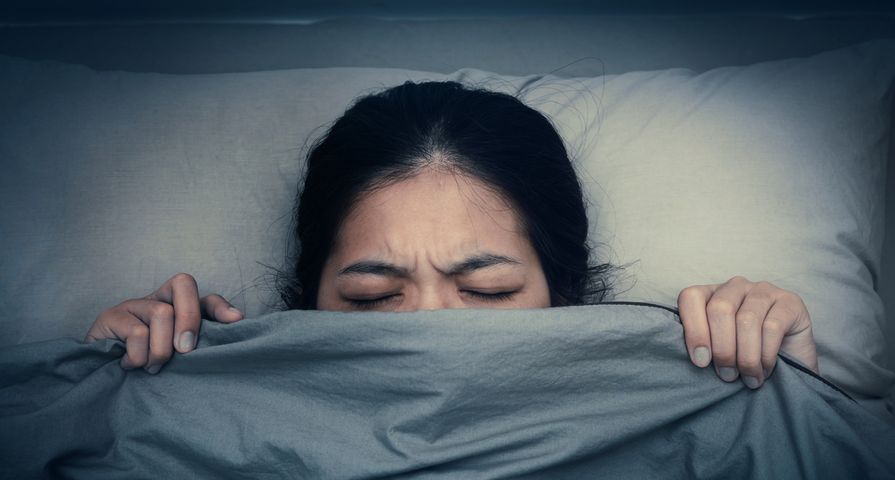 You shoot awake jolted with fear and dripping with cold sweat—you just had a nightmare. You may be the frequent victim of scary dreams or hardly suffer them at all.  However, many factors can leave us prone to horrific dreamscapes creeping into our slumber.

Take a deep breath and gather your nerves, and let’s explore the dark science behind nightmares…

According to statistics from the American Academy of Sleep Medicine (AASM), young children between the ages of 5- and 12-years old are the most frequent age group plagued with nightmares.

The most common sources of nightmares for kids are likely exactly what you’d expect—watching a scary movie or television program or listening to a spine-tingling story before bedtime. However, real life events can also disturb a child’s (or even an adult’s) sleep cycle and cause vivid and terrifying dreams. For example, the AASM points to stress, changes in schedule (i.e., new school year), or even a family death as common nightmare culprits.

While up to 50-percent of kids suffer from nightmares—the AASM estimates that the adult population of nightmare sufferers is far less. For instance, while watching scary images on television, suffering increased stress, or experiencing the death of a loved one can also cause nightmares in adults, only 2- to 8-percent of adults still have nightmares.

Nightmares in adulthood are often the way that we are forced to address difficult or stressful issues in our lives. For instance, it’s easy to ignore work stress when dealing with our many career, family, and social obligations during the waking hours. However, during sleep we will suffer a nightmare, which forces us to notice stressors.

What Happens During a Nightmare?

If you ask the experts at the Mayo Clinic, they’d explain that nightmares, like dreams, are the body’s way of continuing a thinking steam or process during sleep. This is why one of the most common sources of nightmares is stress—or the brain’s way of trying to resolve a source of conflict (i.e., problems at work or school, a major life change, a tragedy).

According to sleep experts, nightmares are the brain’s way of tackling difficult or stressful issues during REM (Rapid Eye Movement). Nightmares are believed to occur in the amygdala (in the brain’s frontal lobe), which manages negative emotions (i.e., fear, stress, and anger) during REM as a way of sorting out difficult problems with as little distraction as possible.  That means if you don’t address stress during the day—you can almost be certain you’ll have a nightmare to address them when you’re sleeping.

Unresolved issues that attack during sleep (i.e., stress or trauma) aren’t the only sources of nightmares. A 2000 study published in the Journal of the Mind and Body, found that poor eating habits increased nightmare frequency—particularly for late night snackers who tend to nosh on foods that are rich in carbohydrates or caffeine, which triggers both metabolism and brain activity.

According to research from the Mayo Clinic, adults who suffer nightmares are most often caused by psychological factors—including sleep disorders (i.e., restless leg syndrome and sleep apnea) or anxiety and depression, which in turn cause sleep deprivation.

For instance, any disorder that disrupts regular sleeping and waking times can heighten the risk of adult nightmares—including a recent traumatic event (i.e., an attack, injury, or accident) that also triggers post-traumatic stress disorder (or PTSD). The Mayo Clinic points to anxiety disorder as a frequent cause of adult sleep disorders and nightmares.

Everyday changes that cause fear are also linked to triggering nightmares. For instance, a notable study published in the Journal of Abnormal Psychology, found that college students are prone to nightmares. Over a 2-week period it was discovered that 47-percent of college students monitored suffered at least one nightmare.

Additionally, both children and adults undergoing a period of change or a stressful milestone were prone to nightmares. For children, the change might be starting preschool where as for the adult the change may be a career change. Interestingly, the scientists also noted the nightmares featuring death and murder were common in adults who were facing a forced ending or abrupt change (i.e., retirement, pregnancy, or a divorce).

If nightmares are the brain’s way of making us address difficult issues, a 2000 study conducted by the University of Colorado Medical School, in Pueblo, Colorado, tells us that no matter how much we suppress the stress and anxiety of trauma, unresolved conflicts we refuse to deal with during waking hours will continually haunt us in our dreams.