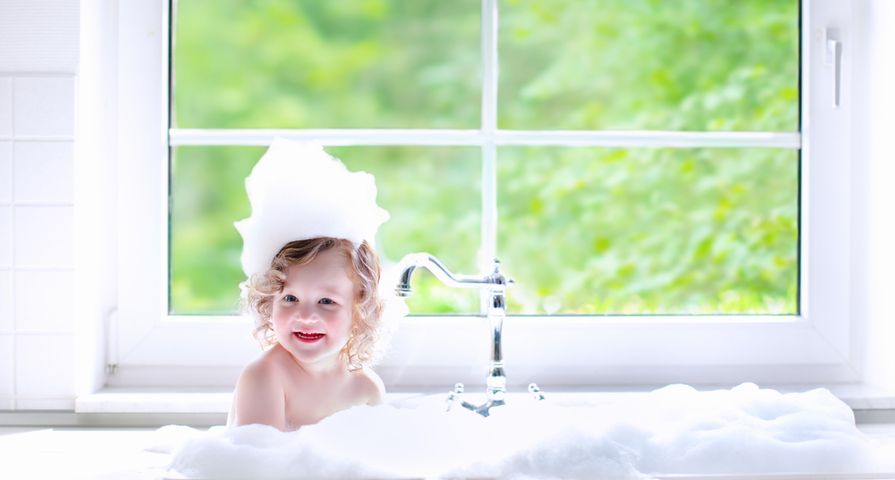 Your toddler may do things that can’t be explained, and you might just chalk it up to them being young and silly. After all, most things toddlers do are adorable (when they’re not having a tantrum in public) and don’t seem to cause any harm.

However, according to the U.S. magazine, Parents, your child may be giving you signals that something is wrong or trying to express something without words by the way they act and the gestures they make. They can be seemingly innocent behaviors, but by learning to read your child, you can better provide solutions. Here are seven behaviors you can probably relate to…

1. Wanting to be Naked in Public

Parents magazine notes that many toddlers feel the need to be naked, and don’t yet grasp the social graces of wearing clothing in public. The magazine says in an article that disrobing can be a source of pride for your child, and they sometimes do it to “seize control”. It’s their way of rebelling on a smaller scale.

The magazine suggests getting your child more involved in the process of getting dressed, such as asking them which pair of pants they prefer to put on. Letting them run around as nature intended is fine inside the house, but setting limits outside by not letting them play without clothing can be helpful.

You may have noticed your child shaking or shivering violently (without being provoked). Some experts call it a “shuddering attack” or “shuddering spells”, and they could lead some parents to believe their child is having a seizure or some other reaction.

According to a post on the National Centre for Biotechnical Information website, shuddering attacks are usually regarded as “an uncommon benign disorder” in infants and young children. This means they are generally harmless and go away with time. However, the same post notes that you may want to seek the advice of a pediatrician as it could indicate a nervous system problem.

Many toddlers will reach the dreaded biting phase—where they not only bite objects, but may even start biting you, other children, or themselves. The American Psychological Association (ASA) says between one-third and one half of all toddlers get bitten by another child in daycare.

While it may be associated with tooth discomfort, it is more commonly used as a way to express anger and frustration, according to the ASA. The organization suggests instead of being horrified by a biting incident and saying “no”, to try and identify what the child needs and work with them towards changing their behavior. A “time out” accompanied by an adult who continues to educate the child why biting is not ok is also recommended.

You may notice your toddler hitting themselves in the head or even banging their head against something. This may look terrifying, but it’s not always as harmful as it appears. Parents magazine says it is called “self injurious” behavior, sometimes linked to a neurochemical imbalance that leads to a spike in endorphins causing a “euphoric-like response” (note: this release of endorphins may also numb the pain from the hitting).

However, on the extreme end of the scale, hitting oneself can also be a sign of autism or seizure activity, noted the article. It can also be related to pain from an ear infection or frustration from a lack of ability to verbally communicate. The article suggests taking notes when your child hits herself, and if there were any triggers. A visit to the pediatrician is in order if the behavior becomes a concern.

You set your toddler in the bathtub and inevitably they try to take a sip of the bathwater—which is kind of gross but probably harmless. However, it may be confusing if the baby just drank a bunch of milk or water. Are they just thirsty? Probably not, says Parents magazine, “to your toddler, it’s like she’s at a big tea party and she’s sitting in the teapot.”

Popular parenting resource, BabyCentre, says it is normal behavior for a toddler to want to sample the tub contents and suggests using diversion tactics—such as adding toys to the tub to distract them. You can even offer fresh water in a cup while they’re in the bath so they can practice sipping. And if they spill, it’s no big deal in this case.

6. Cramming Inedible Objects into Their Face

Your child is becoming increasingly fascinated by his or her own body when they hit toddler age, and that means they’re also discovering their ears, nose, and mouth as places to put objects other than food. Toddlers may just be doing it to amuse themselves or others, notes a 2012 article in the Chicago Tribune.

Today’s Parent magazine compiled a list of the 10 most common objects kids love to shove up their noses, and some of them might be surprising to you (i.e., game board pieces, raisins, and pebbles). Encourage them to gently blow them out, or consult a doctor if it’s lodged in tight.

There also comes a time when a toddler realizes they can get attention quickly by screaming out of the blue. It might be random, catching you off guard and leave you wondering what is wrong with your child. However, experts say it is a normal part of development and it’s really nothing to worry about (although your nerves may tell you differently).

Experts also suggest that screaming is not a behavior to be punished, but rather a normal way of expression for a baby that can increase if you try to quiet them each time he or she does it. It could be your child simply experimenting with sound, or expressing some kind of frustration. Limiting how you react to it could limit how often your toddler feels the urge to scream.