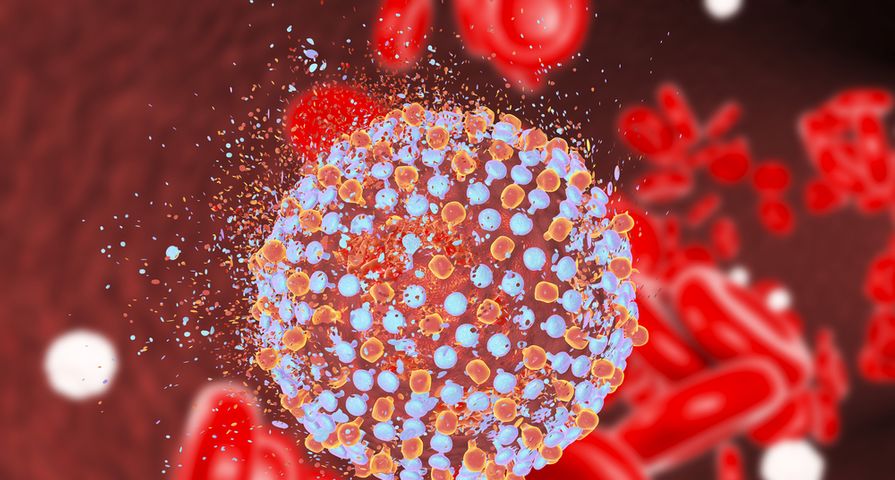 Medical Facts to Know About Liver Cirrhosis
Over 3 million Americans are living with a long-term infection of hepatitis C (HCV), says WebMD. It is transferred from one person to another through blood and other bodily fluids, and while it’s now curable if treated with the proper medication, it often doesn’t exhibit any symptoms, so a lot of people that have it, don’t realize until it’s spread to their liver.

If left untreated, hepatitis C can be very damaging and lead to serious complications with the liver. “HCV enters the body and reproduces in the host’s (infected person’s) body, specifically targeting the liver,” writes Very Well Health. “HCV often evades the body’s immune system and causes disease as a result of direct attack on the liver.” The body’s immune system responds with inflammation, but that is also quite damaging to the liver. By the time this happens and symptoms of cirrhosis, liver failure or damage begin to appear, the person could potentially have been infected and not even known it for over a decade.

Unlike hepatitis A and B, there is no vaccine to protect against hepatitis C, so it’s up to the general public to get educated and informed on how this virus is spread so they can better protect themselves. Here’s a look at some of the most common causes and risk factors for transmitting hepatitis C…

The most common form of spreading and transmitting hepatitis C is through shared needles which commonly happens when using needles to inject drugs. This behavior is at the top of the list for extreme risk of developing HVC. According to Very Well Health, this is how the majority of hepatitis C infections occur in the United States.

The source goes on to explain that treating the infection might be different for people who acquire it through injected drugs than those who get it elsewhere. “The reasons for this are unclear, but people who are frequently re-exposed to the virus through repeated drug use are more likely to become infected again after having been treated,” writes the source.

The likelihood of contracting hepatitis C through a blood transfusion nowadays is extremely low. In fact, it’s virtually impossible because now all donated blood is tested before it’s used. However, the year 1992 was when the screening test for HCV went into effect, says WebMD, so prior to that, using infected blood during transfusions was one of the main reasons new cases of HCV were popping up in the United States. “People who had hemophilia, thalassemia, or other disease requiring multiple transfusions were especially at risk for exposure,” writes Very Well Health. Thus, any blood used for a transfusion prior to 1992 could potentially be infected and unintentionally transmitted to another person.

Very Well Health writes that experts believe the chance of getting hepatitis C through a blood transfusion is so rare that it’s about one in two million.

Since many people who have hepatitis C don’t know about it, the U.S. Centers for Disease Control and Prevention recommends people who were born between 1945 and 1965 to receive a one-time screening blood test.

The Mayo Clinic writes “the largest group at risk includes everyone born between 1945 and 1965 — a population five times more likely to be infected than those born in other years.”

Even though this form of transmitting the virus is extremely rare, it has happened. Very Well Health writes that HCV can be transmitted through a household and that living with an infected person can increase a person’s chance of infection due to their exposure to the virus. You can reduce the risk by taking certain precautions like not sharing personal items like razors and tooth brushes. These types of person items aren’t generally recommended to be shared between two people and often aren’t — regardless of any infection.

Similar to blood transfusions (prior to 1992), hepatitis C can be transmitted through organ donation and medical procedures, but nowadays this is extremely rare because organ donations are also tested for the virus. Very Well Health points out that they are also even tested for antibodies, making the risk even lower. A person can also be exposed through vaccinations that are done with contaminated needles, but this is not common practice in developed countries because all healthcare providers use disposable needles.

Unprotected sex is probably how most people think hepatitis C is most commonly transmitted, but it actually accounts for very few cases. It’s definitely possible, but unlike the hepatitis B virus, “which is known to be present in semen and vaginal fluids, HCV is not found in significant amounts in these fluids,” explains Very Well Health. This means the risk for getting HCV during intercourse is quite low, however the risks are raised for people who have multiple partners, when there is direct blood contact, one of the partners has a sexually transmitted disease, or HIV.

When it comes to the actual number of how many people develop the virus through unprotected sex, the quantity is unknown. The source does cite one study which looked at long-term, monogamous relationships made up of one person with hepatitis C and found that the risk of transmitting the virus to the other partner was only about 4-percent. There has also been additional research which has found that gay men are at a slightly higher risk of acquiring HCV when having unprotected sex with an infected partner.

When a mother passes the virus onto her child it’s referred to as vertical spread, but thankfully it only happens in about 4-percent of infants who are born to mothers infected with hepatitis C. This risk can double if the mother also has HIV or high amounts of the virus in her body at the time of the birth, says Very Well Health. There has been some inquiry into whether or not a vaginal or C-section birth makes any difference in likeliness of spreading the virus, but the source notes that a C-section doesn’t increase the risk, however a prolonged rupture of the membranes during delivery can.

Most children who are born to a mother with HCV are born with antibodies of the virus, but this doesn’t mean they are infected. “Antibodies are immune proteins produced by the body in response to disease — causing agents like HCV, and these immune proteins are transmitted to young babies from their mothers,” writes the source.

When it comes to breastfeeding, there is no research to prove that it can in any way, shape or form increase the risk of transmission. Very Well Health points out that the Centers for Disease Control and Prevention (CDC) and the American Congress of Obstetrics and Gynecologists (ACOG) actually encourage new moms (even those with HCV) to breastfeed their babies.

This is only a real concern for people who work in healthcare settings, like nurses, physicians, or any other healthcare professional who uses needles when providing medical care. “It is estimated that more than 600,000 needle stick injuries happen each year, with nurses being at highest risk,” writes Very Well Health. “An average of about 2-percent of needle stick injuries where there has been exposure to the virus will result in acute hepatitis C.”

Cases of this are rare, but they have happened. There are a small number of people who have become infected with hepatitis C but do not know how they could have been infected. Very Well Health explains that this type of contamination is referred to as sporadic, idiopathic, or community-acquired infected. “Most experts believe that this type of spread comes from contact with a contaminated wound, a forgotten high-risk contact with someone infected with HCV, or exposure to HCV from a medical procedure,” explains the source.

The only way to know whether you’ve been exposed to and contracted the hepatitis C virus is through a blood test.

Similar to injecting drugs, WebMD states that people who snort cocaine and share tools like straws or something similar to inhale the drug, could be at risk. The source also notes that people who are on dialysis have an increased risk, particularly if the equipment isn’t properly cleaned or should have been thrown away instead of reused.

Also, anyone with body piercings or tattoos has a heightened risk due to the equipment and supplies used. If it’s come in contact with an infected person and wasn’t properly cleaned, the virus can be transmitted. “To be on the safe side, make sure all tools are sterile or disposable, even the tattoo ink,” writes WebMD.

Lastly, someone who’s been in jail or prison also has a higher risk since these kinds of environments are where people might be sharing personal items like needles for drugs, tattoo or piercing equipment, or through unprotected sex, but that’s less common.

Hepatitis used to be treated with weekly injections and oral medications which was better than nothing, but it wasn’t practical because a lot of patients couldn’t use this form of treatment because of their other health problems or the side effects, says the Mayo Clinic.

Nowadays hepatitis C is completely curable through oral medication. “Chronic HCV is usually curable with oral medications taken every day for two to six months,” writes the source. This is a huge step forward, but unfortunately it doesn’t do anything to help with the fact that hepatitis C often doesn’t show any symptoms until it’s begins creating problems with the liver.

Because there is no effective vaccine against HCV, being cautious and following these preventative tips is the only way to ensure you will not contract hepatitis C and help lower the risk.

First and foremost, you should never share things like needles or syringes with another person. This is particularly important for people who use drugs.

Healthcare workers should be extra careful when working with blood, and anyone who works in an environment that performs medical or cosmetic procedures should follow proper protocol when it comes to cleaning equipment and tools. Patients should also do their due diligence by making sure they are putting their health in safe hands.

If you’re in a relationship with or share a household with an infected person, you shouldn’t share personal items, and those who have the disease should be careful to cover any wounds and dispose of things like bandages and pads properly.

Lastly, if you’re engaging in sexual activity with more than one partner on a regular basis or with someone who is infected with HCV, you should practice safe sex, particularly if there’s a chance that it might involve contact with blood.