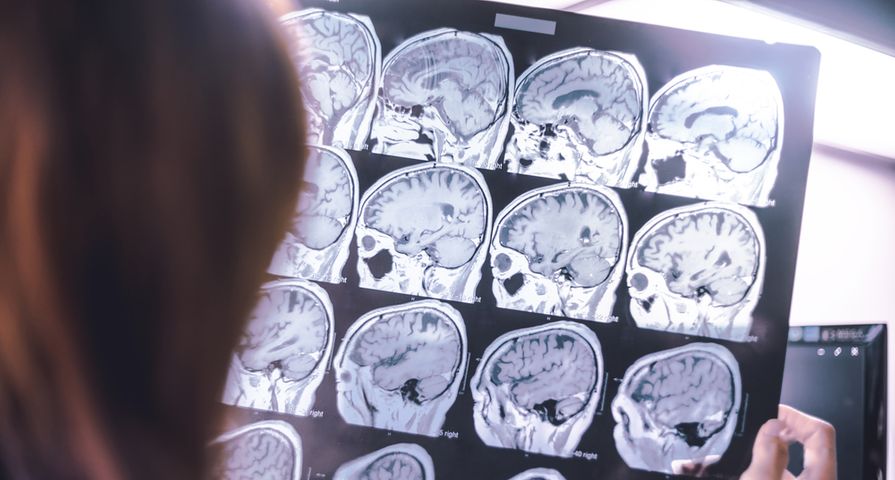 Also known as cerebral atrophy, this can occur as a result of many diseases of the brain (including strokes, traumatic brain injuries, Alzheimer’s, and others), resulting in a loss of brain neurons (and brain mass). The National Institute of Neurological Disorders and Stroke notes brain atrophy can be generalized – meaning the entire brain has shrunk – or it can affect one particular part of the brain.

The symptoms depend on what part of the brain the atrophy affects, adds the source. However, if both hemispheres of the brain are affected, thought processes and voluntary functions could be affected, it adds. Regardless of the underlying cause of brain atrophy, here are six possible related symptoms…

This is a condition often associated with stroke that affects a patient’s ability to communicate. There are various forms of aphasia depending on what part of the brain has been affected; for example, Wernicke’s aphasia is when patients have damage to the temporal lobe, which impairs ability to understand speech, according to Livestrong.com.

Meanwhile, Broca’s aphasia is from damage to the frontal lobe, and results in “nonsensical speech production,” according to the source. Global aphasia is when the temporal and frontal lobes of the brain have been affected, which can make speaking and comprehension especially difficult, it adds.

This can be from a variety of health problems, but RightDiagnosis.com lists it as related to cerebral atrophy. The weakness can affect your entire body or one area in particular, adds the source.

It’s important to let your doctor sort this one out, as weakness can lead to muscle atrophy (wasting away of muscle tissue). It can also be a sign of anemia, infections, or even myotonic dystrophy, which is marked by progressive muscle weakness that often doesn’t show up until adulthood.

HealthyHearing.com explains that brain atrophy can get worse with hearing loss, and there’s evidence that both are linked. It is governed by the “use it or lose it” principle, meaning if you’re hard of hearing already, it can actually negatively impact your gray matter in auditory regions of the brain.

The source says that’s why it’s important to get a hearing aid device if you’ve been diagnosed with hearing loss – it’s not only important to have proper communication with people, but it can also help preserve the brain. It might not be the auditory brain functions that are affected – a study showed “researchers found that people with hearing loss had less brain activity when focusing on complex sentences compared to others,” adds the source.

This is defined by having seizures for 24-hours or more following general anesthetic therapy, explains MedScape.com. The article from the source cites a study that shows those with “super refractory status epilepticus” or SRSE not only suffer seizures, but also brain atrophy which can be quite pronounced in some cases.

“The analysis showed that atrophy was more likely to develop in patients with a longer hospitalization and duration of anesthetic treatment,” explains the source. The atrophy could be from the brain’s “disuse” or from the anesthesia having a “toxic” effect on brain cells over time, it adds.

This is a “common feature” of Multiple Sclerosis (MS) and is characterized by “deficits in information processing speed and memory” as well as mood disorders, according to an article published on the Wiley Online Library.

While MS patients may experience depression, in some rare cases they could also display “euphoria sclerotica and pathological laughter/crying,” adds the source. Overall, neuropsychological impairment is an indicator of low quality of life, it explains. Brian atrophy plays a role, it adds. “Measures of tissue atrophy including whole-brain and central atrophy are especially well correlated with and predictive of cognitive impairment,” it says.

Livestrong.com notes, “while dementia causes brain atrophy, it is also a symptom”. This is a progressive group of syndromes that cause memory loss, language comprehension difficulties and personality changes, it explains.

Dementia can lead to a person losing enough cognitive function to no longer be able to take care of themselves. Alzheimer’s disease falls under the dementia category, which is a specific disease that can eventually rob a person completely of brain function. A doctor can figure out if a form of dementia is the underlying cause of the atrophy, and whether there’s any treatment available.