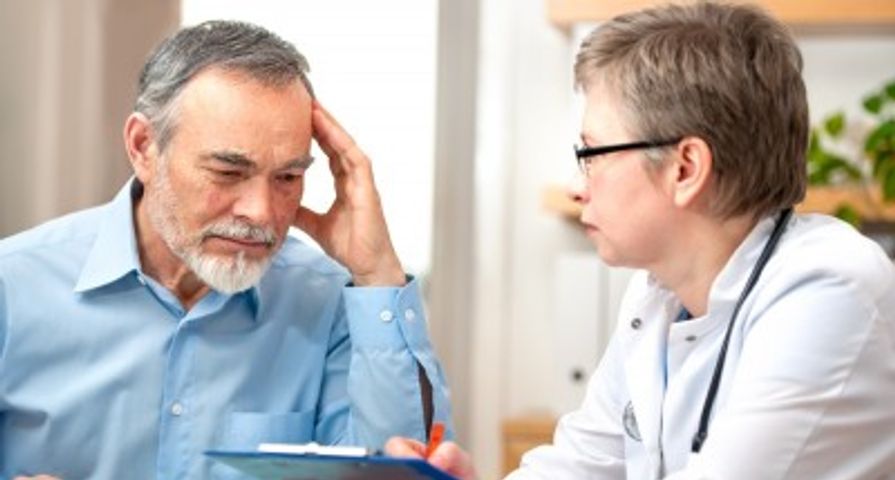 Robin Williams Death: 9 Things To Know About Lewy Body Dementia
Although “dementia” and “Alzheimer’s” are often used interchangeably, they are not, in fact, the same thing. According to Healthline, dementia is “an overall term used to describe symptoms that impact memory, performance of daily activities, and communication abilities.”

While Alzheimer’s disease is the most common type of dementia, accounting for 60- to 80-percent of cases, there are several other primary types of dementia—including these nine.

Formerly known as multi-infarct or post-stroke dementia, vascular dementia is the second most common cause of dementia, accounting for approximately 17-percent of cases.

According to the Alzheimer’s Association, vascular dementia occurs “from blood vessel blockage or damage leading to infarcts (strokes) or bleeding in the brain.” The onset may occur suddenly, and include symptoms such as impaired judgment, difficulties concentrating, and problems with planning, organizing or making decisions.

Also known as Lewy body dementia, this type of dementia is caused by abnormal deposits of the protein alpha-synuclein in the brain (specifically, the cortex). Healthline says such deposits “interrupt chemical messages in the brain and causes memory loss and disorientation.”

Common symptoms of dementia with Lewy bodies include troubles sleeping, visual hallucinations, memory loss, disorientation, and mobility issues that are similar to those with Parkinson’s disease.

According to the National Institute on Aging, mixed dementia is “a combination of two or more disorders, at least one of which is dementia.” Although a variety of combinations are possible, the most common is Alzheimer’s and vascular dementia.

In recent years, new findings have indicated this type of dementia to be more common than previously thought. The Jersey Alzheimer’s Association, for instance, says “up to 45 percent of people with dementia have signs of both Alzheimer’s and vascular disease.”

Although Parkinson’s disease is not a type of dementia, as the disease progresses approximately 1 in 5 people will develop dementia—most commonly dementia with Lewy bodies or Alzheimer’s.

Healthline says that early warning signs include problems with reasoning and judgement, such as “trouble understanding visual information or remembering how to do simple daily tasks.” As the disease becomes more advanced, the person may become depressed, paranoid, have trouble speaking or forget words during a conversation.

Previously referred to as Pick’s disease, frontotemporal dementia occurs due to “progressive damage to the frontal and/or temporal lobes of the brain,” says Alzheimer’s Australia.

Because the frontal lobes are involved in mood, social behavior, attention, judgement, planning and self-control, the source indicates that damage “can lead to reduced intellectual abilities and changes in personality, emotion and behaviour.” The temporal lobes, on the other hand, help us to process and understand what we see and hear; therefore, damage can lead to difficulties with recognition and communication.

One of the rarest forms of dementia, Creutzfeldt-Jakob disease occurs in only one in 1 million people each year. According to the Alzheimer’s Society, it is caused by “an abnormally shaped protein called a prion infecting the brain.”

The symptoms of Creutzfeldt-Jakob disease are similar to other types of dementia, including confusion, memory loss, agitation and depression, in addition to muscle stiffness and twitching. Because the disease progresses rapidly, death often occurs within one year of diagnosis.

Another rare type of dementia, normal pressure hydrocephalus is responsible for approximately 5-percent of dementia cases. It is caused by excess fluid build-up in the brain’s ventricles, which Healthline says can “cause damage that leads to dementia symptoms.”

Normal pressure hydrocephalus most commonly occurs in those over the age of 65, and symptoms typically include memory loss, forgetfulness, difficulties walking, and loss of bladder control.

Like Parkinson’s disease, those with Huntington’s disease often develop dementia. Due to a defective gene, the disease causes the brain’s nerve cells to break down prematurely, which can lead to dementia.

Symptoms of dementia in those with Huntington’s disease often include difficulty thinking, focusing and reasoning, as well as learning new things. Impaired movement is also common, making essential activities such as walking, talking and swallowing far more challenging.

Most commonly caused by alcohol abuse, the Alzheimer’s Society defines Wernicke-Korsakoff syndrome as “a chronic memory disorder caused by severe deficiency of thiamine (vitamin B-1).”

This deficiency leads to bleeding in the lower sections of the brain, causing symptoms such as loss of muscle control, difficulty remembering things, as well as trouble learning and processing information. Although Wernicke-Korsakoff syndrome is technically not a type of dementia, it is often classified as such due to the symptoms being so similar.