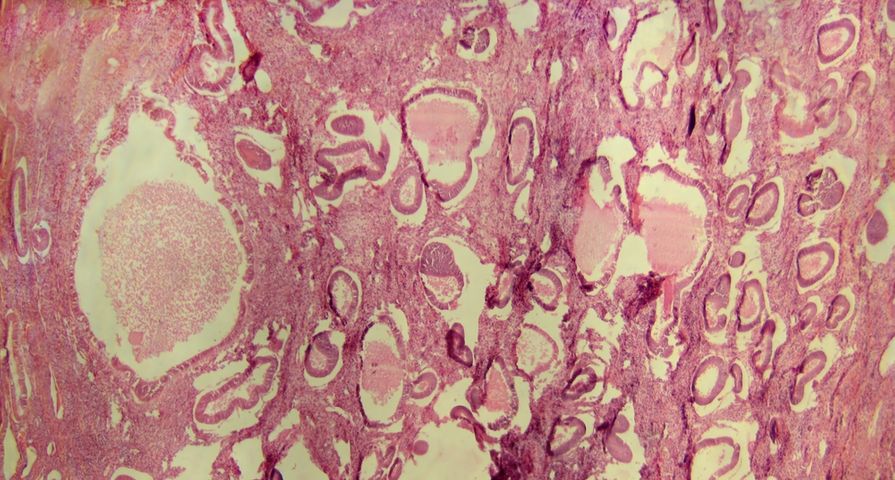 A polyp is an abnormal tissue growth of tissue that can form flat (known as sessile) or in a narrow elongated projectile (known as “pedunculated”) from a mucous membrane.

Polyps commonly develop in the colon, sinuses, stomach, cervix, small intestine, bladder, uterus, and even in the nasal cavity, or in any other mucous membrane. There are nine classifications of polyps…

Colorectal polyps, as the name suggests, form in the colon.  Even though it can take considerable time for symptoms to show themselves—pain, rectal bleeding, or diarrhea and constipation can indicate a problem or even the early stages of colon cancer (where polyps turn malignant). Most polyps are found during a routine colon cancer screening, in which case they are typically removed via biopsy to reduce the development of colon cancer with a follow up colonoscopy performed every 3 to 5 years.

Nasal polyps form in the mucous membrane of the nasal cavity—particularly in the nose and paranasal sinuses. They typically occur in individuals with severe allergies (i.e., allergic rhinitis) as mucosa builds up and forms a polyp.

Cervical polyps develop on the surface of the cervical canal. Typically, these benign tumors don’t cause any symptoms and women can live for years without ever knowing they exist. Sometimes they will be found in a routine check-up if the patient complains about abnormal menstrual bleeding.

An endometrial polyp is a type of polyp that develops on the lining of the uterus. They can form as a flat lesion (sessile) on the endometrium or as an abnormal growth with a stalk (pedunculated) within the uterine cavity. Endometrial polyps occur in approximately 10-percent of adult women without symptoms. However, if a pedunculated polyp grows to several centimeters in size, it can stick out through the cervix into the vagina, causing pain and sexual discomfort.

Adenomatous polyps (also referred to as adenomas) are a type of pre-malignant polyp that develops on the lining of the colon and put the patient at increased risk of cancer. Approximately 5-percent of adults over the age of 60-years will develop one of the three types of adenomatous polyps—such as a Tubular Adenoma, which can occur anywhere along the colon, a Villous Adenoma, which commonly form in the rectal area, and Tubulovillous Andemoma, which develop in a tubular fashion.

Affecting 1 in 300,000 births, Peutz Jeghers polyps are hereditary in nature. They develop in patients with intestinal polyposis syndrome, a type of genetic condition that causes benign polyps to form in the gastrointestinal tract and oral mucosa (or inside the smooth lining of the lips).

Inflammatory fibroid polyps (or IFP), are benign tissue growths that grow in a projectile fashion (or spindle formation) around the blood vessels in the gastrointestinal tract. Typically there is a great deal of inflammation associated with this classification of polyp.

Cronkhite–Canada Syndrome is an uncommon syndrome that typically affects males of Japanese ethnicity (which make up two-thirds of those affected). The condition causes the sporadic formation of multiple polyps along the digestive tract—including the large intestine, small intestine, stomach, and the esophagus. Typically, Cronkhite–Canada Syndrome polyps are benign and don’t develop into cancerous tumors.