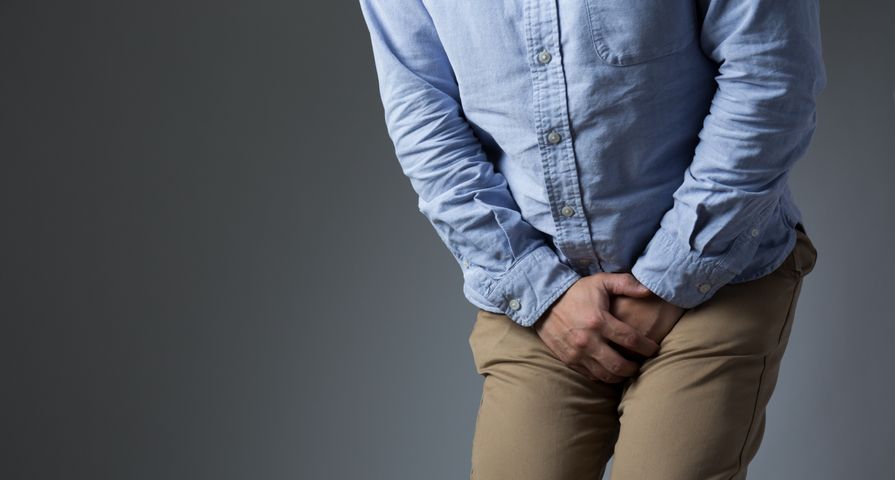 Bladder stones, which are also referred to as vesical calculus or cystoliths, most often occur when the bladder isn’t completely emptied, and the minerals in the remaining urine—known as concentrated urine—crystallize into hard masses.

There are a variety of factors that may cause this to happen, which we’ll soon explore, but struggling with emptying the bladder isn’t the only reason stones can occur. In some cases there may be an underlying medical condition or infection that is contributing to their formation. Read on to learn more about the most common causes and risk factors of this condition.

All men have something called a prostate gland which is located between the penis and the bladder. It surrounds the urethra, a “thin tube that transports urine from your bladder during urination,” defines Healthline.com.

As they age, many men will develop an enlarged prostate, which the NHS says “can press on the urethra and block the flow of urine from their bladder.” While this is typically treatable, the source indicates that bladder stones can develop in those for whom the treatment is unsuccessful.

Foods That Can Irritate The Bladder

When your nerves are functioning properly, the Mayo Clinic says they will “carry messages from your brain to your bladder muscles, directing your bladder muscles to tighten or release.” If these nerves become damaged, however—from a stroke or spinal injury, for example—the bladder may not completely empty when urinating.

This is referred to as neurogenic bladder; a condition that oftentimes requires people to have a catheter inserted into the bladder to help drain it. But even the catheter frequently leaves a small amount of urine behind, which the NHS says “can lead to the formation of bladder stones.” The source adds that this occurs in approximately “one in 10 people with a neurogenic bladder.”

According to MedicalNewsToday.com, “Infections of the urinary tract or radiation therapy can leave the bladder enlarged,” and this inflammation can lead to bladder stones.

Urinary tract infections are especially common in women, which Healthline says is because “Women have shorter urethras, which makes for a shorter path for bacteria to enter the bladder.” And this bacteria is what causes the infection to occur.

As mentioned earlier, catheters can cause bladder stones to develop if they fail to completely empty the bladder. But bladder stones may also occur simply due to the catheter being in place, as mineral crystals can form on the sides of the tubes.

In addition to catheters, the Mayo Clinic says this same mineral crystal formation can occur on other objects “such as a contraceptive device or urinary stent” if they accidentally make their way into the bladder.

Foods That Will Keep Your Bladder Healthy

Although the stones that form in the kidney are different from those that develop in the bladder, WebMD says it’s possible that “a small kidney stone could move from your kidney into your bladder and grow.”

This may sound alarming, but it can happen frequently without you noticing. Healthline writes, “small kidney stones may not present any problems and pass painlessly through your urine.” Where the problems arise is if the kidney stone is too large to pass through the bladder and gets stuck. In which case, the source says they may have to be removed by a doctor.

According to the NHS, bladder diverticula “are pouches that develop in the wall of the bladder.” If they get too big, urine can collect in them, making it difficult for a person to completely empty their bladder which increases the likelihood of developing bladder stones.

The source also says that these pouches “can be present at birth or develop as a complication of infection or prostate enlargement.”

Cystocele is a condition that affects only women, as the NHS says it occurs “when the wall of the bladder becomes weakened and drops down into the vagina,” which can affect the flow of urine from the bladder.

The source says cystocele can occur “during a period of excessive straining,” such as when giving birth, lifting heavy objects, or while struggling with a bout of constipation.

People who struggle with urinary incontinence (a loss of bladder control) may choose to help treat their condition by having bladder augmentation surgery. According to the NHS, in this procedure “a piece of the bowel is removed and attached to the bladder to make it larger.”

Unfortunately, having bladder augmentation surgery can increase a person’s chances of developing bladder stones. The source says that they occur in one in 20 people who have the procedure.

While in North America bladder stones are rarely caused by poor diet, it is far more common in developing countries. WebMD says this is because “a diet high in fat, sugar, and salt that also lacks vitamins A and B can raise your chance of getting bladder stones.”

This NHS says this is especially the case if a person is not consuming enough fluids, which “can alter the chemical make-up of urine, making the formation of bladder stones more likely.

Most of us have battled some kind of infection at one point or another in our life, and no matter when or where they occur, they can be nasty. If you’ve never had a bladder or urinary tract infection (UTI) before, consider yourself lucky! These ones can be particularly uncomfortable.

It might not seem possible, but bacteria and other organisms can get into the bladder and cause infection and inflammation. According to Healthline, UTI’s are a common cause of bladder stones.

Apparently gender doesn’t play too big of a role here because even though men tend to develop bladder stones more than women, females are more likely to get a UTI because their urethra is shorter making it easier for bacteria to get in.

Yes, it’s possible to damage the urethra. Doesn’t sound pleasant and trust us, it isn’t! A damaged urethra tends to happen due to an illness, disease, or some kind of trauma, says Healthline.

“It may narrow due to infection and blow the flow of urine exiting your body,” writes the source.

A weak bladder probably makes you think of someone who can’t hold their urine, and while that might happen, we’re talking about a weakening in the walls of the bladder which can cause pouches to form.

“The walls of your bladder may become weak in some areas and form pouches that bulge outward. Urine can collect and store in these pouches,” writes Healthline.

A bladder outlet obstruction is one of the two main risk factors for bladder stones and it’s basically what it sounds like — something that blocks the flow a urine. It basically covers any conditions that will inhibit urine to flow through from the bladder to the urethra, “the tube that carries urine out of your body — can lead to bladder stone formation,” writes Mayo Clinic.

There are many things that can cause bladder outlet obstruction, but the most common cause is an enlarged prostate.

When it comes to bladder stones, unfortunately for men, they are at a higher risk. Healthline explains that men, particularly old men with prostate problems are the ones who will develop these crystallized minerals in their bladder. “Men in their 80s have a much higher risk than younger men,” writes the source. “However, even men in their 30s living in industrialized countries can develop stones.” That is probably because these are the people who tend to eat a diet high in fat and sugar, which is yet another risk factor of bladder stones.

As if children in developing countries didn’t have enough odds against them, they are sadly at a higher risk than other children for developing bladder stones. Healthline says, “children who live in developing countries are also susceptible to bladder stones.” This is most likely due to the fact that they don’t have as much access to clean water so they aren’t able to stay hydrated throughout the day. They are also more likely to eat a poor diet.

A neurogenic bladder is one of the common risk factors for bladder stones. According to the Mayo Clinic, there are a number of conditions or incidents that can damage the nerves that control bladder function. These include either a “stroke, spinal cord injuries, Parkinson’s disease, diabetes, a herniated disk and a number of other problems.”

People who suffer from a neurogenic bladder will also have an enlarged prostate other “other type of bladder outlet obstruction, which further increases the risk of stones.”

We’ve already mentioned that a damaged spinal cord can affect how the bladder functions and cause conditions that might lead to bladder stones, but Medical News Today lists paralysis as it’s own risk factor, as well. This is mainly because it can affect whether or not someone has the ability to use their bladder properly.

“People with serious spinal injuries and loss of muscle control in the pelvic region are unable to empty their bladder completely,” writes the source.