Signs and Symptoms of Shingles 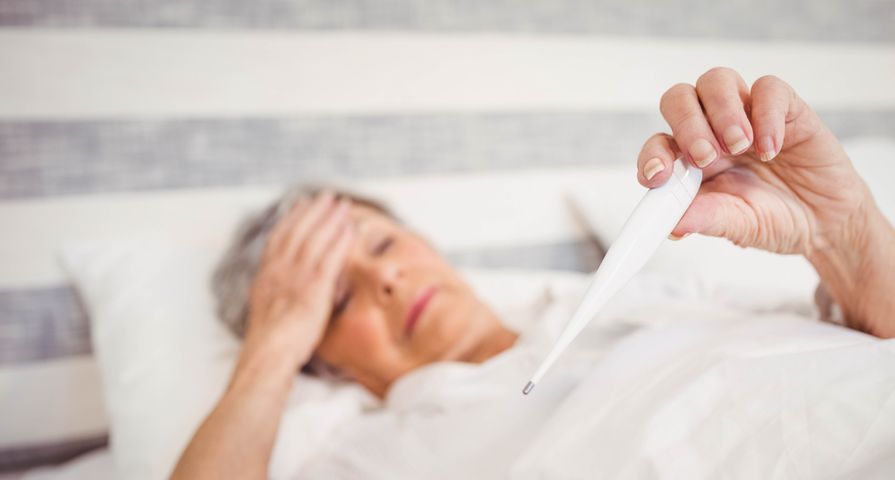 Each year more than 1 million Americans suffer with shingles, an itchy, blistering rash caused by herpes zoster, which is the same viral infection that afflicts the nerve roots and causes chickenpox. In fact, those who’ve had chickenpox can end up with shingles years later (most commonly after the age of 50) due to the fact that the infection can live dormant and  become active again due to mounting age, lowered immunity, a medical treatment (i.e., radiation) or medication that suppresses immunity, or an infection (i.e., HIV).

The issue with shingles is that it often mimics other conditions, such as poison ivy or scabies, with similar uncomfortable symptoms. However there are a few telling signs that give shingles away, including…

When the shingles virus activates, you will likely break out in a rash that rears its ugly head in the form of painful, fluid-filled blisters, which are often contained to only one side or area of the body. This happens because the virus affects localized nerve roots, typically in the chest, back, buttocks, or neck, and remains directly connected to those exact areas for about 7 to 10 days. Initially, the blisters will be filled with a clear fluid, but after a few days, the fluid will cloud up and take on a darker, murkier hue.

Most patients report that they felt generally unwell in the days leading up to the breakout of the rash, with some saying they developed a mild form of the flu. These flu-like symptoms are usually accompanied with swollen lymph nodes, which may be tender to the touch. If you’ve ever had chicken pox and you develop flu like symptoms and swollen lymph nodes, be on the lookout for a rash and visit your doctor ASAP if one develops.

Add These Foods to Your Diet to Treat Shingles

Tingling sensations are often reported alongside the flu-like symptoms that precede the outbreak of the signature rash that accompanies a shingles outbreak. These tingling sensations usually manifest as extreme sensitivity to touch in a localized area of the body or on one side of the body. Patients also report itching, burning, and numbness, which is usually contained to the areas of the body where the rash later appears.

Doctors believe that these tingling sensations occur because the virus that causes shingles affects nerve roots. Thus, the nerves in affected areas respond to a stimulus that is only present on a microbial level. From your point of view, you’ll be experiencing sensitivity, tingling, itching, and burning for no apparent reason. The most common sites of these tingling sensations include the back, chest, abdomen, face, neck, head, or one arm or leg. It almost never affects both sides of the body simultaneously.

Leading up to the development and outbreak of a shingles rash, you may become nauseous and experience a persistently upset stomach. At first, you may dismiss these symptoms as being caused by something you ate or drank, but they typically progress into a flu-like syndrome that removes all doubt that you have become unwell. In most cases, patients report a general feeling of nausea or queasiness, which may worsen when in certain body positions. A sharp stomach ache may also occur, and some people experience diarrhea and/or vomiting. However, vomiting is relatively rare.

In most cases, the stomach discomfort is relatively mild, yet noticeable enough to signal that there’s a problem. One of the definitive aspects of the nausea and flu-like symptoms that precede a shingles outbreak is that they are not typically accompanied by a rise in body temperature. Thus, you may feel like you have a fever even though your body temperature is still in the normal range.

Foods to Avoid When Suffering From Shingles

The shingles virus will often cause neuropathic pain in the cranial nerves and nerve roots, which will result in a painful, recurring headache that often won’t be alleviated by over-the-counter (OTC) headache medications. This is because the headache is being triggered by interference with your nerves, a condition that most OTC pain relievers aren’t designed to deal with.

Unfortunately, a clinically significant number of people who develop a case of shingles will continue to experience pain and headaches even after the disease has run its course. In extreme cases, this lingering discomfort can last for months or even years. The condition is known as “postherpetic neuralgia,” and is often concentrated in the forehead when it affects the head region. In a best-case scenario, postherpetic neuralgia will resolve itself within about 30 days, although you may require additional care and specialized treatment to help you deal with lingering symptoms.

Earlier, we mentioned that the flu-like symptoms seen in shingles cases won’t normally cause a rise in body temperature. However, this isn’t a hard-and-fast rule that always applies to every case. Rarely, patients may not only feel like they have a fever but also they may actually develop one. It doesn’t happen often, but when it does, it can be serious. It is not uncommon for shingles fevers to exceed 101 degrees Fahrenheit (38.3 degrees Celsius).

The best treatment for fever is bed rest and plenty of fluids. However, if the fever is accompanied by additional symptoms, such as a stiff neck, breathing problems or a very severe headache, you should seek immediate medical attention. Any fever above 102 degrees Fahrenheit (38.9 degrees Celsius) should be medically evaluated. The same is true of fevers that last for more than a few days, and of fevers that become increasingly severe over the course of a continuous 24-hour period.

Causes of Left Lower Quadrant Pain in Men and Women

Experiencing chills is very common before the shingles rash breaks out, due to fluctuations in body temperature and the immune system’s natural response to a viral infection. These chills are not usually localized, but rather, seem to affect the entire body. This often misleads patients into thinking they have nothing more than the regular flu, when in fact, they are experiencing the early symptoms of a case of shingles.

As with many other shingles symptoms, chills can only be managed through palliative treatment designed to improve the patient’s overall level of comfort. Listen to your body and respond accordingly. If you’re feeling cold, warm up by putting on extra clothing or staying under a blanket. If you’re too warm, cool down by removing clothing or adjusting the indoor temperature. Unfortunately, chills can be difficult to manage because patients tend to swing back and forth between feeling hot and cold. In such cases, keep as comfortable as possible, avoid strenuous activity, and drink plenty of fluids.

Vision complications can occur if the shingles virus spreads to nerves that connect to the eyes. This will cause eye pain in bright environments, a condition known as “photosensitivity.” In extreme cases, a nasty eye infection (called “conjunctivitis” or “pink eye”) can occur. Conjunctivitis can cause inflammation and the development of a gooey, sticky sticky coating on the eyelashes. Treatment options include the introduction of artificial tears to keep the eye moist, and cold packs to help moderate the temperature of surrounding tissues.

These symptoms should be considered very serious. If you develop them, seek immediate medical attention. Untreated eye-based symptoms caused by shingles can lead to temporary or permanent vision impairment, even blindness. While these outcomes are rare, they are present nonetheless; permanent damage usually results from complications arising from excessive dryness in the eye or poorly regulated temperature of the nearby tissues.

Common Causes of Low Back Pain

Muscle pain (or “myalgia”) is often an early warning sign of shingles. This usually presents as a particularly painful tingling or a feeling of “piercing needles” in the skin, and it most often occurs in the muscles of the arms and legs. Alternately, patients may experience sensations of tenderness or soreness in muscles that have not been overworked, along with other symptoms of malaise.

Like headaches, this type of muscle pain can linger for extended periods of time, even after the case of shingles has died down. This lingering muscle pain is part of the postherpetic neuralgia syndrome, and it can be very difficult to treat. Rarely, it lasts for very long periods of time; some patients claim it affects them for many years afterwards. However, like postherpetic neuralgia headaches, lingering muscle pain usually goes away on its own within 30 days.

Most individuals who’ve had shingles will complain, in the days preceding its full-on outbreak, of lethargy or a feeling of being completely drained of energy for no apparent reason. This can lead to longer periods spent sleeping, or overwhelming urges to take daytime naps. Despite the patient’s best efforts, attempts to increase energy levels are usually only met with temporary results. Many people increase their caffeine intake, which leads to more frequent urination, causing dehydration and an intensification of the malaise and fatigue symptoms.

In some cases, patients may experience confusion or even memory loss for no apparent reason. Thankfully, most patients go on to recover fully from these symptoms once shingles is resolved. It is extremely uncommon for any such problems to linger for weeks or months after other symptoms have gone away.

Extreme sensitivity to touch is often a complaint of shingles patients. This sensitivity commonly affects the forehead and chest, causing eating, sleeping, and daily activities to be very uncomfortable or almost impossible. In almost all cases, this sensitivity is most pronounced in areas of the body that are affected by the telltale rashes that comprise the condition’s most visible and definitive symptom.

This sensitivity to touch usually presents itself before the rash breaks out, with patients reporting that certain localized parts of their body suddenly feeling tender, painful, or highly reactive to even light external stimuli. As a result, sleeping can be difficult as bedsheets and certain bodily positions put pressure on these areas. Sensitivity symptoms usually peak within a few days to a week after the rash appears before subsiding as the patient’s condition improves. However, they can linger as part of the postherpetic neuralgia syndrome experienced by a minority of people who have otherwise fully recovered. 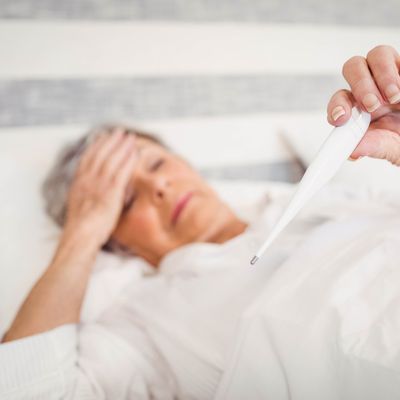