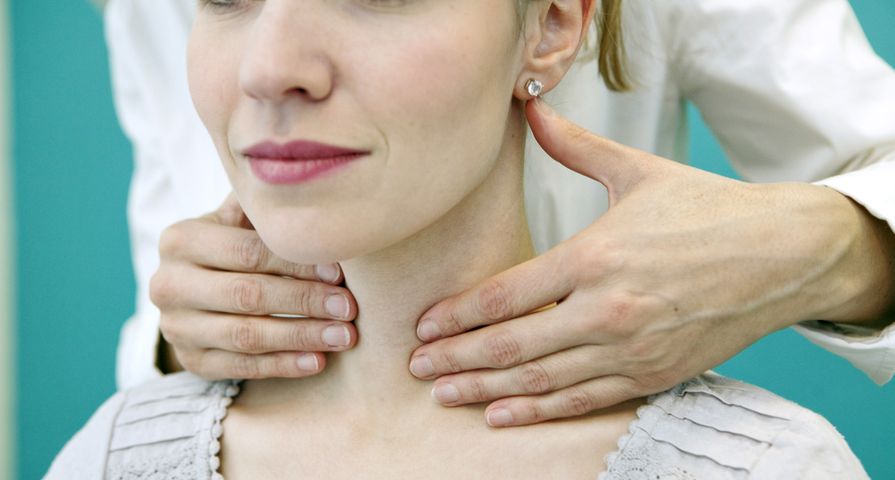 Hashimoto’s disease, also referred to as chronic autoimmune lymphocytic thyroiditis, affects the thyroid by disrupting the production of hormones. The thyroid is responsible for important body functions like regulating the metabolism, body temperature, and muscle strength. When these hormones (also known as thyroxine or T4) are impacted, it causes an array of symptoms.

You likely have never heard of Hashimoto’s disease, but according to Healthline, it’s the most common cause of hypothyroidism (underactive thyroid) in the United States. This thyroid disease causes the body’s immune system to attack your thyroid gland, leading to inflammation, and subsequently an underactive thyroid. While it primarily affects middle-aged women, it can also occur in men, as well as people of any age — even children. Let’s look at 12 facts about this disease that affects thousands of Americans…

1. Its Exact Cause Isn’t Known

Hashimoto’s disease is an autoimmune disease, which is a group of diseases that are still being studied. However, the basic premise is that your body’s defense systems are somehow tricked into thinking healthy tissue is a threat and turns against it.

The Mayo Clinic says that some scientists believe the trigger for this particular disease may be a virus or bacterial infection, and others believe there’s a genetic link. There could be other risk factors, which we’ll look more closely at next.

2. There are Risk Factors

While the exact cause of this disease hasn’t been pinpointed, there apparently have been some risk factors associated with Hashimoto’s disease. For example, the Mayo Clinic notes that women are more likely to develop the disorder.

Surprisingly, middle-aged people are most at risk (although anyone at any age develop the disease). Having another autoimmune disease, such as rheumatoid arthritis or inflammatory bowel disease, can also boost your chances of developing Hashimoto’s disease, as well as those who work in an environment where they’re exposed to environmental radiation.

3. There are Visible Symptoms

There are many possible symptoms of Hashimoto’s disease, but some of them are more obvious than others. WebMD said that telltale signs could include weight gain, thinning hair, paleness, and facial puffiness.

One of the more alarming physical symptoms may be the development of a goiter, which is an enlarged thyroid gland. This can even interfere with swallowing, adds the source.

4. There are Other Less Obvious Symptoms

While you may have some physical signs that you’re suffering from the disease, there are a host of ways it affects your overall well-being (that others don’t necessarily see or notice). These symptoms can include chronic fatigue, muscle pain, and constipation, says WebMD.

The list doesn’t stop there. Visit your doctor if you’re also having symptoms such as feeling cold all the time, having irregular menstrual cycles, or suffering from depression. Your doctor can also check your heart rate, which can slow down when you have this disease.

5. It’s The Leading Cause of Hypothyroidism

EndocrineWeb.com says that about 14-million Americans suffer from Hashimoto’s Disease, which is responsible for the largest share of hypothyroidism (or underactive thyroid). Hashimoto’s disease is the most common form of thyroid disease in the U.S.

Hypothyroidism means your body lacks sufficient thyroid hormone, adds EndocrineWeb.com. The main purpose of the hormone is to regulate your body’s metabolism, and an underactive thyroid gland will result in a slowed metabolism (among other symptoms we’ve already covered).

6. There May Be a Cancer Link

The California-based non-profit PLOS notes on its website that, “in recent years,” there have been reports that thyroid cancers are associated with Hashimoto’s disease. It focuses on a study that looked at the prevalence of thyroiditis among patients with papillary thyroid cancer.

The Mayo Clinic said that there are medications used to treat Hashimoto’s disease, but adds, “If you need medication, chances are you’ll need it for the rest of your life.” One of these drug treatments is called levothyroxine (Synthroid or Levoxyl), which mimics natural hormone replacement therapy.

Your doctor may take some time to get the dosage right, so you could be back to the medical office after the first few weeks of treatment to make adjustments. Overprescribing the treatment can actually result in bone loss and heart rhythm disorders.

The source says many patients are not aware someone else in their family has a thyroid problem, and it advises to ask your family members if you’re diagnosed. (It might also be a good idea to know this kind of health history information even if you haven’t been diagnosed with anything).

If you’re not sure what’s causing your symptoms, your doctor might be able to help you with that fairly quickly. Prevention.com explains although not fun for “needle-phobes,” there’s a simple blood test to confirm the condition.

The test checks for your blood levels of two thyroid hormones called thyroid stimulating hormone (TSH) and T4. “To confirm Hashimoto’s, they’ll also look at whether you have antithyroid antibodies, which are produced when your immune system attacks the gland,” according to the source.

10. There Can Be Serious Complications

Not to make things seem worse, but the Better Health Channel in Australia warns there can be serious consequences if the condition goes untreated, including death.

The source says complications can also include a goiter, heart conditions (such as a heart attack from the rise of bad cholesterol that is normally kept in check by thyroid hormones), emotional problems (depression and low libido), and myxedema (a severe form of hypothyroidism that can lead to a coma and can be fatal in “very rare” cases).

Prevention.com says you may not even suspect you have a thyroid problem because of the “chronic, sluggish development” of symptoms as the thyroid slows down. It’s a gradual disease that can worsen over time.

“It’s not like you wake up one day 10-pounds heavier and your mood is awful,” it explains. The source suggests to “stay in tune with your body,” and check in with your doctor if things aren’t feeling like they should. Hint: you shouldn’t be feeling tired and moody all the time.

12. It May Affect Ability to Conceive

MedicineNet.com says that although hypothyroidism resulting from Hashimoto’s disease is not a reason for women to avoid trying to get pregnant, but in some cases, it may lead to trouble conceiving. “In addition to careful obstetric care, management of thyroid hormone replacement by an endocrinologist is helpful,” adds the source.

It says thyroid hormone levels should be checked before and during pregnancy, so the medication doses can be adjusted if necessary. “The target goal is usually within the range for non-pregnant women but at the higher end of the normal range,” it adds.