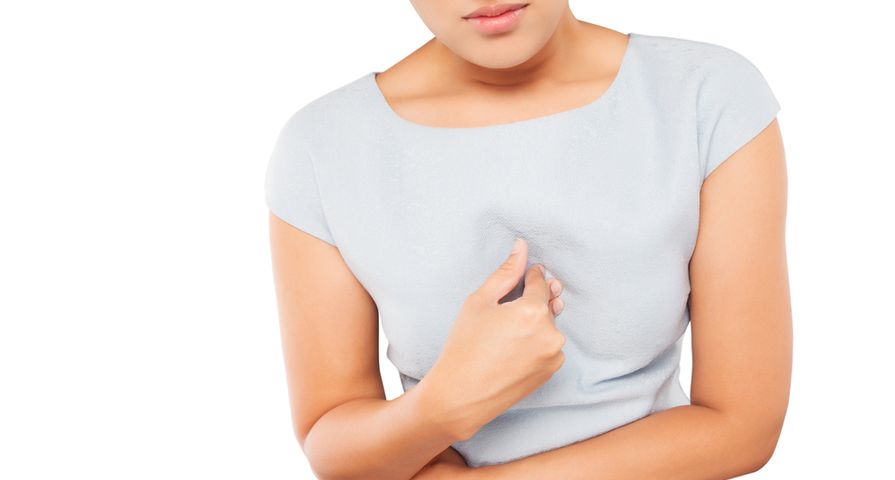 Gastroesophageal reflux disease (GERD) is a condition where stomach acid flows back from the stomach into the esophagus, causing problems like heartburn. It is a surprisingly common condition, affecting approximately 25 to 35 percent of people in the United States.

But what exactly causes the lower esophageal sphincter (LES) to relax and allow this backflow of stomach acid? Well, there are a variety of risk factors that can lead it to weaken or become damaged, including these seven.

Carrying an excess amount of body fat, otherwise known as obesity, is a primary risk factor for developing GERD. ABC News explains that this is because “Obesity puts strain on the lower esophageal sphincter, this valve between the stomach and the esophagus, and thereby predisposes to more severe reflux.”

RefluxMD.com adds that a person’s likelihood of developing GERD is “is directly related to BMI”—body mass index. While a healthy BMI is around 20-25, in those with a BMI over 30 almost 70 percent of people tested positive for GERD.

Having a hiatal hernia—otherwise known as a diaphragmatic hernia—can also increase a person’s likelihood of developing GERD. According to the U.S. National Library of Medicine, this condition occurs when “part of the stomach moves above the diaphragm, which is the muscle that separates the chest and abdominal cavities.”

When the diaphragm is functioning the way it should, WebMD says it “helps keep acid from rising into your esophagus.” But in those with a hiatal hernia the source indicates that it is easier for stomach acid to backflow into the esophagus.

For many women, GERD only becomes an issue during pregnancy. There are a couple of reasons this happens. The first is because women experience an increase in the hormone progesterone while pregnant, which HealthCommunities.com says “can loosen the lower esophageal sphincter.”

The second reason is that, as the baby grows, it can put pressure on the stomach, increasing the occurrence of acid reflux. WebMD indicates that this is “usually worse during the third trimester,” and that “the symptoms almost always go away after delivery.”

GERD is also more likely to occur in those who suffer from connective tissue disorders. Scleroderma is one such disorder, and is characterized by “the buildup of scar-like tissue in the skin and elsewhere in the body,” says the U.S. National Library of Medicine.

But what makes people with such conditions more likely to develop GERD? HealthCommunities.com explains that it is because “thicker muscular tissues keep the stomach muscles from relaxing and contracting properly.”

Lifestyle habits also play a role in increasing a person’s chances of developing GERD. Alcohol, for example, is known to trigger acid reflux—especially red wine. Although it’s not entirely clear why alcohol causes GERD, a couple of theories are “that alcohol interferes with the LES’s ability to function as a barrier,” or that “it may have something to do with the acidity of alcoholic beverages,” says RefluxMD.com.

Smoking is another habit that can increase the risk of GERD. WebMD indicates there are several reasons why, including that it increases acid secretion, reduces LES muscle function, and reduces salivation, “which neutralizes the effect of acid.”

Diet is another key risk factor for GERD, especially if certain trigger foods are consumed. According to Georgia Reflux Surgery, these foods include: citrus fruits and juices, caffeinated products, chocolate, spicy or fried foods, as well as anything made from tomatoes.

WebMD adds that these foods are especially likely to cause GERD when eaten in large quantities, and that “lying down right after a meal can trigger heartburn or other symptoms of acid reflux disease, such as a dry cough or trouble swallowing.”

There are a variety of other risk factors that can contribute to GERD. Asthma is one factor, where “reflux starts as a result of continuous coughing and pressure in the lungs,” says HealthCommunities.com. The source adds that certain asthma medications have also shown to loosen the LES.

Diabetics who suffer from gastroparesis are also more likely to suffer from GERD, as the condition causes the stomach to empty much slower than usual, leading to reflux. HealthCommunities.com says that peptic ulcers also known to cause GERD “because food does not move from the stomach to the small intestine efficiently.