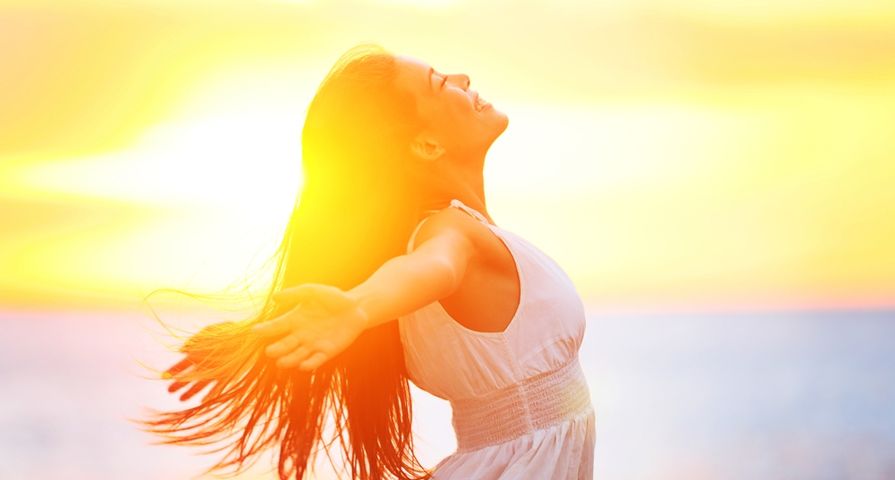 The summer is coming to an end in the U.S., but there’s plenty of sunshine to enjoy, and you can’t discount the many ways getting outside in the sunshine can benefit health physically and mentally. Even when the temperatures cool down into fall and winter, the sun won’t set on the positive impacts.

The sun can have definite benefits if we let it in, and despite what you may have been told, you can be outside without sunscreen for short periods of time (20-minutes or so, depending on the UV index and your skin type) before you have to take protective measures. Here are six reasons to turn off the television and head outside for a brisk walk or a game of catch with junior in the sunshine…

If your doctor has told you that your blood pressure is a bit high, then a jaunt in the sun may be one of your best prescriptions (along with any medications they prescribe you, of course). An article posted by WebMD explains British researchers found a link between sunlight and lower blood pressure.

The research team found that nitric oxide in the top layers of skin reacts to sunlight, which in turn causes blood vessels to open up and let more blood pass through – which will reduce pressure in your cardiovascular system. The team was also suggesting that exposure to ultraviolet (UV) rays from the sun could also lower risk for heart disease, but more research was needed. Even the UVA rays in winter can benefit blood pressure, notes other sources.

Meanwhile, sunlight can help alleviate the symptoms of seasonal affective disorder (SAD), a mild form of depression that strikes many people in the colder months, when the days are shorter and they see the sun less often. The same source also says sunlight can have benefits for patients with non-seasonal depression, as well as help manage anxiety and panic attacks (which have also been linked to reduced sunlight).

According to TheSleepJudge.com, sunlight in the first hour of your day is crucial in ensuring you have quality sleep at night. It goes back to that serotonin hormone we already mentioned, notes the source. “Serotonin is a neurotransmitter that regulates everything from mood to sleep,” notes the source.

The proper production of melatonin, which is a sleep hormone, relies on proper levels of serotonin, it adds. That’s why it’s important to get your serotonin levels up early in the day, so melatonin can take over 12-hours later when you need it. Don’t just look out the window – try to “expose the naked eye” to the sun by stepping outside (obviously without staring directly at the sun, which is harmful to your eyes).

MIndBodyGreen.com said sunshine exposure is sort of like getting exercise – namely, it can increase the amount of oxygen content in the blood, which in turn can increase stamina and muscular development.

This is definitely not to say you shouldn’t still get exercise – but if you’ve ever noticed that little bit of a boost to your endurance when it’s a warm, sunny day, you’re probably not imagining it. Use that extra energy to do the things you love, and the exercise itself will provide more short and long-term benefits.

Slathering sunscreen all over yourself may block sunlight (specifically UVB rays) from producing Vitamin D in your body, but hanging out in a swimsuit outdoors can produce high Vitamin D levels, according to Healthline.com (still take precautions if you burn easily).

The source explains that after 30-minutes of direct UVB exposure, most white (Caucasian) people can produce 50,000-IUs of Vitamin D (although other sources have this number significantly lower), while darker skinned people will produce less (but still high) amounts that would exceed daily requirements. Vitamin D has been tied to bone health, but also has been linked to prevention of certain diseases such as Multiple Sclerosis and even Type 1 diabetes.

You know the benefits of catching some rays when we’re adults, but it can start benefitting you even before you’re born, according to a study posted on the U.S. Library of Medicine.

The study notes that while ambient outdoor temperature has no effect on birth weight of babies, mothers who were exposed to “peak sunshine” during their first trimester of pregnancy gave birth to babies that were “significantly heavier” than infants born to mothers with lower exposure to sunshine during the same phase of pregnancy. Babies with medically classified low birth weight may be at higher risk for certain conditions later in life.