Home » Your Health » Ways Giving Thanks Can Make You Healthier

Ways Giving Thanks Can Make You Healthier 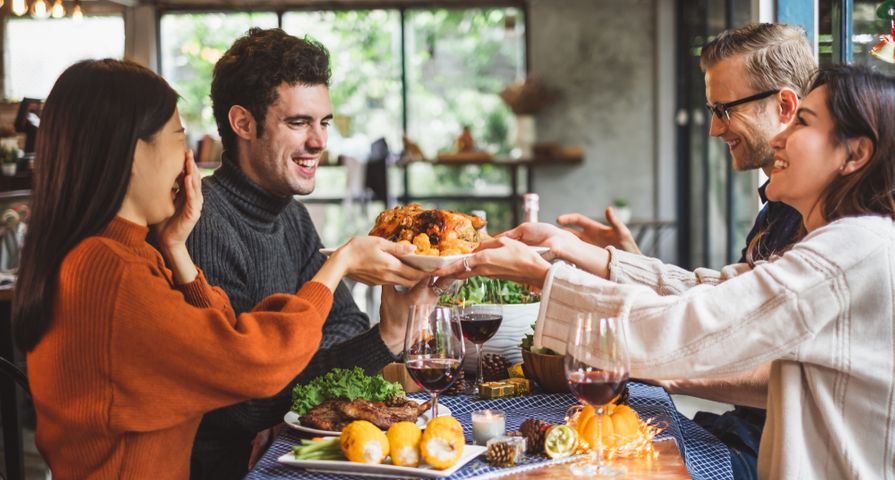 When it comes to Thanksgiving, you probably can’t think about anything else other than taking in all that delicious food and gravy. However, the day is supposed to be about giving—so let’s switch the focus a bit here. Thanksgiving is a wonderful chance to make a toast at dinner to all the good people and things in your life. But why only do these things on a holiday? It may be a reminder of all those good things, but that outward thankfulness is great for you all year round.

There are at least six ways that being grateful can actually help you all year round, whether it’s just a “thank you” are something more heartfelt…

Forbes magazine reports that it has been scientifically proven that giving thanks can improve your physical well-being. According to the source, a 2012 study showed that “grateful people experience fewer aches and pains and they report feeling healthier than other people.”

This could in be part because people who experience gratitude are also more likely to take care of their health, adds the source. “They exercise more often and are more likely to attend regular check-ups with their doctors,” it explains, noting lifespan can be extended as a result.

Ways to Keep Cool This Summer

One of the unexpected outcomes of expressing gratitude can be that you get something back from it. This seems to be in line with research on the subject cited by Harvard Medical School, which involved participants writing about particular topics over the course of weeks.

Helps You Relate to Others

Empathy is the ability to relate to another’s feelings—so while that is handy for knowing when someone is sad, it can also help you understand why others may be angry (even if you’re the source of the anger), notes Forbes magazine.

“Grateful people are more likely to behave in a prosocial manner, even when others behave less kind,” explains the article. Because of this heightened level of empathy, you’re less likely to lash out against those who have negativity towards you, it adds.

When you connect with others by giving thanks, you become more in tune with how you feel about yourself, explains Psychology Today. The source cites a 2014 study that originally appeared in the Journal of Applied Sport Psychology, which showed grateful athletes had a better relationship with themselves—”an essential component to optimal performance.”

This may boost performance because higher self-esteem helps you focus on your own abilities, rather than someone else’s, adds the source. It also helps you appreciate other people’s accomplishments, rather than having feelings of resentment.

Tips on Staying Healthy While Working From Home

VeryWell Health actually has a number of reasons why giving thanks can reduce the amount of stress in your life, but let’s focus on a few of them. Being a generally grateful person helps you see the good in others, even if they’re being difficult, which can be a source of stress for many less equipped to deal with those types.

“They see the opportunity in a challenging situation,” and use it to learn and grow from, rather than dreading it, adds the source. This attitude can be extended to spouses, family and friends, it adds. “People with a greater level of gratitude tend to have stronger relationships in that they appreciate their loved ones more,” explains the site. Another positive is that many people in your life will recognize this and want to do better for you, it adds.

Apparently not saying “thank you” regularly can actually deprive you of sleep. According to Psychology Today, “grateful thoughts can help you get a great night’s sleep.” This is not just a conclusion made by the source; it was apparently backed up by a study.

It cites a study published in Applied Psychology that shows students who wrote in a “gratitude journal” for 15-minutes each night helped ease worries and promote longer and better quality rest. “With positive thoughts as a lullaby, you’re more likely to drift off into a peaceful slumber,” it adds.