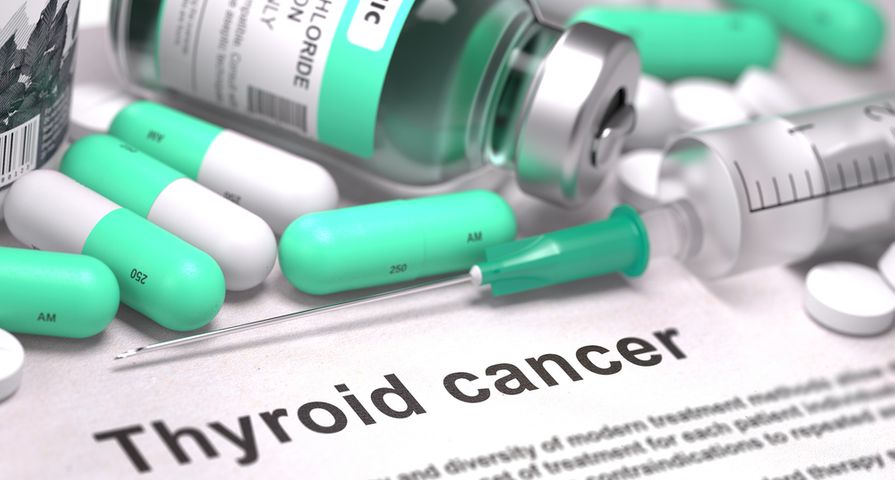 According to the Thyroid Cancer Survivor’s Association, or ThyCa, thyroid cancer is the leading endocrine cancer, with increased incidence during the past decade. Effecting patients of all ages, symptoms may be difficult to detect in the early stages, but early detection is key. The American Cancer Society approximates approximately 62,450 new cases this year.

1. Where Does Thyroid Cancer Develop?

Thyroid cancer specifically affects the cells in the thyroid, which is an integral part of the body’s endocrine system. The small butterfly-shaped gland, known as the thyroid, is located just below the voice box (or larynx).

The thyroid is made up of 2 lobes, which resemble butterfly wings in shape. Each lobe rests on either side of the windpipe and is connected by the isthmus (a thin bridge of tissue).

When a tumor becomes malignant, or when it metastasizes, it means that the cancer can spread from the thyroid cells to other cells and areas of the body.

Parafollicular cells (or C cells) produce a hormone, known as calcitonin. The body requires calcitonin hormone in order to regulate phosphate and calcium levels in the blood.

The majority of the thyroid gland is made up of follicular cells. According to research from the John Hopkins Society, the follicular thyroid cells produce hormones needed for every aspect of your metabolism and vital health—such as weight, blood pressure, body temperature, and heart rate.

According to the Canadian Cancer Society (CCS), papillary thyroid cancer is responsible for roughly 70-percent of all thyroid cancer cases in North America. This occurs with changes to the thyroid cells, which cause malignant tumor development.

Signs of an Underactive Thyroid

While many more malignant types of thyroid cancer exist (i.e., sarcoma, lymphoma, and squamous cell carcinoma)—many cases of thyroid cell changes cause benign, or non-cancerous thyroid conditions. According to the Mayo Clinic, changes in the thyroid cells, although not cancerous, can still develop into life-altering conditions—such as hyperthyroidism (an overactive thyroid), hypothyroidism (underactive thyroid).

Hyperthyroidism can be caused by several conditions, including Plummer’s disease (toxic goiter), Graves’ disease (autoimmune), and thyroiditis (inflammation). While symptoms of hypothyroidism can vary depending on the level of hormone deficiency, leading to unexplained weight gain, fatigue, chills, thinning hair, and depression.

Both Hodgkin’s and non-Hodgkin’s lymphomas begin in the lymphocytes in white blood cells. The difference between these two lymphomas is the presence or absence of an abnormal cell called a Reed-Sternberg cell.

If this type of abnormal cell is present, the lymphoma is Hodgkin’s. If it is undetected, the lymphoma would be classified as non-Hodgkin’s lymphoma, which is the more common lymphoma. There are several tests to determine the specific type of lymphoma, but doctors are able to locate an abnormal Reed-Sternberg cell under a microscope.

According to the American Cancer Society, 8 out of 10 cases of MTC are Sporadic MTC. It generally occurs in older adults, affecting one thyroid lobe. The second type of MTC is Familial – which is inherited. This version may occur in childhood as well as early adulthood and may occur in several different areas of the thyroid lobes.

Signs That Could Indicate a Thyroid Problem

Research done by James Newman for the endocrineweb, found that it is not uncommon for people suffering from this type of cancer to need a tracheostomy because it will leave the thyroid and grow into the trachea. Interestingly, this type of thyroid cancer is more common in men, outweighing women 2:1.

There are 4 small glands behind and attached to the thyroid, called the parathyroid. These glands are responsible for regulating the body’s calcium levels. This type of cancer is also extremely rare and there are generally less than 100 reported cases in the United States every year.

If parathyroid cancer occurs, there are heightened calcium levels which will cause the individual to feel tired, weak, urinate frequently, suffer from depression and constipation. The only way to get rid of this type of thyroid cancer is to remove it surgically and is a lot harder to cure.