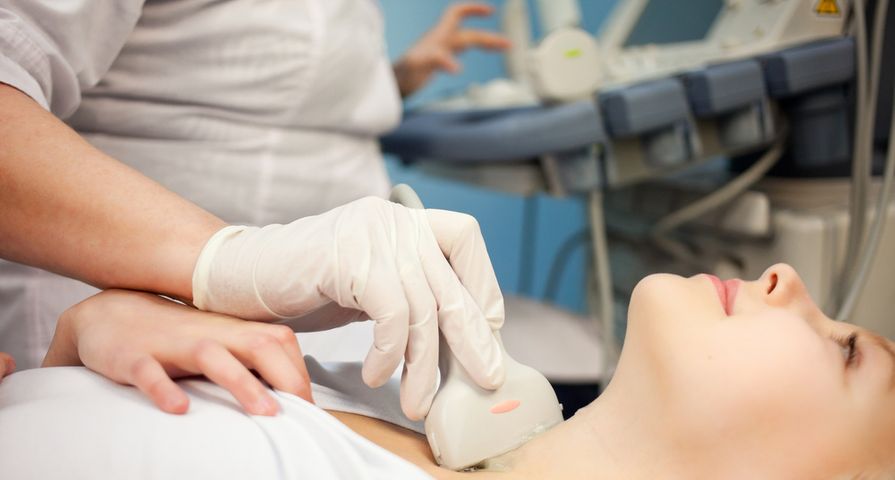 Goiter: Common Symptoms, Causes, and Treatments
The thyroid (located in the front of the neck) is a small, butterfly-shaped gland part of an intricate network of glands known as the endocrine system. The endocrine system coordinates many of the body’s activities, including the metabolism. Since the thyroid is so important, when something goes wrong, it can throw off the entire balance of your system.

There are many different disorders that can occur when the thyroid produces either too much hormone (hyperthyroidism), or too little (hypothyroidism). They are also fairly common and range in type and severity. If you suspect you might have a thyroid disorder, go see a doctor to get a proper diagnosis. Here are 12 common thyroid disorders that can lead to changes in weight, energy levels, mood, and more…

MedicineNet.com explains this condition is when your thyroid gland doesn’t produce enough hormones. There are a host of symptoms that come with hypothyroidism: fatigue, dry skin, constipation, and poor concentration just to name a few.

Under the hypothyroidism category is something called Hashimoto’s thyroiditis (also known as Hashimoto’s disease), which the source says is an autoimmune disorder that causes inflammation of the thyroid gland. In this condition, a patient’s immune system is actually attacking the thyroid, causing it to under produce.

This is essentially the opposite of hypothyroidism, and it presents different symptoms. A hyper or overactive thyroid can “accelerate your body’s metabolism significantly,” which can lead to sudden and unexplained weight loss, notes the Mayo Clinic.

Other symptoms can occur if your thyroid is putting your bodily functions into overdrive. These include an increased (resting) heartbeat, sweating, or feeling nervous or irritable, notes the source. You may also have trouble sleeping (insomnia), or notice thinning skin or brittle hair, it adds.

This actually falls under the hyperthyroidism category, but since it’s the leading cause of hyperthyroidism according to WebMD, we’ll take a closer look at the condition on its own.

In Graves’ disease, your body releases “abnormal antibodies” that mimic a thyroid-stimulating hormone called TSH that’s normally produced in the brain’s pituitary gland, explains the source. These “fake” TSH hormones kick the thyroid gland into overdrive. The good news is that the condition is fairly easy to correct once it’s properly diagnosed, but left unchecked it can cause complications and even death, warns WebMD.

Goiters are a visible problem with the thyroid gland, and are described as “generalized swelling or bulging in the thyroid gland” by EndocrineWeb.com. They can appear whether you have an overactive or underactive thyroid, according to the source.

In some other cases, you may not have any problems with hormone levels or have any related symptoms and still end up with a swollen thyroid, it adds. Other sources point out it could be from lack of iodine in your diet (which is essential for thyroid hormone production), and goiters can even be caused by a pregnancy hormone called HCG.

These can lead to enlarged thyroids but are generally more localized (such as a single lump), notes the American Thyroid Association. These lumps are sometimes not obvious, and are discovered during routine medical exams, adds the source.

Nodules can lead to hyperthyroidism, but most are “non-functioning” and don’t present any symptoms at all – even if the nodule turns out to be cancerous, adds the source. However, a nodule may grow and interfere with the throat, which can make breathing and swallowing more difficult, it adds. Have your doctor examine you if you locate a suspicious lump in your neck area.

As mentioned before, some nodules could turn out to be cancerous (they could be painful in this case) – and MedicineNet.com points out that thyroid cancer is far more common among women than men, and that about 66-percent of cases occur in adults under the age of 55.

There are different forms of thyroid cancer, classified by “the specific cell type within the thyroid that has become cancerous,” explains the source. The good news for thyroid cancer patients is it typically has a high survival rate, but like other forms of cancer, early diagnosis is key.

The Mayo Clinic explains this disease is the result of your immune system attacking your thyroid. The inflammation caused by Hashimoto’s disease (which is also known as chronic lymphocytic thyroiditis), usually leads to an underproductive thyroid, adds the source.

This is the leading cause of hypothyroidism in the U.S., explains the clinic. It adds the disease primarily affects middle-aged women, “but also can occur in men and women of any age and in children.” Symptoms can include a puffy face, hair loss, and muscle aches, among many others.

Any type of thyroiditis implies inflammation of the thyroid, which can lead to either hyper or hypothyroidism, explains Healthline.com. However, acute thyroiditis is a “rare” type of the disorder that can cause pain and discomfort in the gland, adds the source.

The acute version is believed to be linked to a viral infection, and the thyroid swells in response to it. The source says it’s slightly more common among women aged 40 to 50-years than in men of the same age, and it usually appears following a respiratory infection such as the flu.

We’ve covered thyroid nodules, but this particular condition “results in excessive thyroid hormone production from a single nodule in the thyroid gland,” explains YourHormones.info. One lump develops on the gland, causing it to swell and release excess thyroid hormones, it adds.

The source says if iodine – essential to thyroid function – is lacking in your diet, it can cause your thyroid to enlarge to try and absorb any available iodine from the blood as possible. The symptoms of toxic adenoma are similar to hyperthyroidism, says the source, and can include weight loss, flushing, feeling tired, tremors, excessive sweating, and more.

Although not the result of the thyroid itself, in some cases a pituitary gland disorder may be the reason your thyroid hormone production is out of balance. The Hormone Health Network explains the pituitary gland at the base of the brain is about the “size of a pea,” but it has a big impact on systems in your body.

One of the functions of the pituitary gland is to produce thyroid-stimulating hormone (TSH), which prompts the thyroid gland to produce hormones to regulate metabolism, energy, and nervous system function, says the source. If this gland isn’t sending TSH, it can lead to hypothyroidism. There are also (usually non-cancerous) pituitary tumors that can “produce too much of a hormone normally made by the pituitary,” it adds.

This is a thyroid condition (also called neonatal hypothyroidism) that affects newborns, says the Hormone Health Network. It means the baby was born with an underactive thyroid, or no thyroid gland at all, it adds.

“If the condition is not found and treated, it can result in irreversible neurological problems and poor growth,” says the source. However, it notes early treatment can help reverse related problems, but in most cases it will require lifelong treatment. About 1 in 2,000 to 4,000-babies are born with this condition, and it’s twice as common in girls, it adds.

Just like babies can be affected by thyroid problems, new mothers can as well, according to the Hormone Health Network. This condition, an inflammation of the thyroid gland, usually occurs within a year after giving birth, adds the source.

There are usually 2-phases, with hyperthyroidism coming first (lasting about 2 to 4-months), followed by hypothyroidism (lasting up to a year), says the source. It explains that the inflammation can damage the gland, making it less effective at producing hormones – which leads to the hypothyroidism phase. Doctors may prescribe thyroid hormone therapy (such as Levothyroxine) for the second phase if you have symptoms, it adds. In some cases, the hypothyroidism can be permanent and women will need “lifelong thyroid hormone replacement therapy,” says the network.

What Every Woman Should Know About Her Thyroid
X