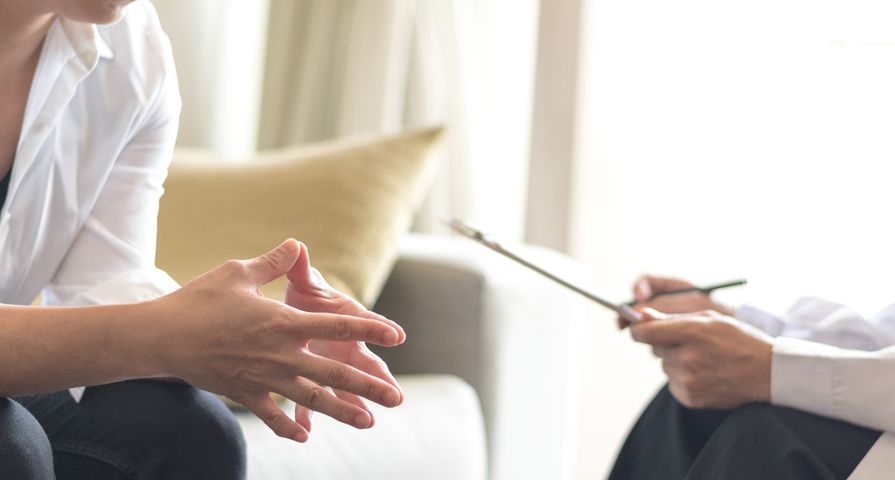 Those with borderline personality disorder (BPD) don’t always feel like themselves – literally. Those with this mental illness don’t have a firm grasp of who they are and what they represent – so they may seem like a different person from one day to the next to outsiders.

The National Institute of Mental Health classifies BPD as a mental illness “marked by an ongoing pattern of varying moods, self-image, and behavior.”

This condition can also affect how a person sees their place in the world and their role, according to the source. “As a result, their interests and values can change quickly,” it adds. This can result in the individual making impulsive decisions.

The same source stresses that not all people diagnosed with this disorder will experience the same symptoms, but there are dominant markers to look out for. The biggest indicators are (sometimes sudden) mood swings, as well viewing life “in extremes, such as all good or all bad,” notes the Institute of Mental Health.

Other symptoms include real or imagined feelings of abandonment, unstable self-image, possible self-harming, impulsive and sometimes dangerous behaviors (such as spending sprees or reckless driving), feelings of emptiness, non-triggered feelings of anger, and difficulty forming trust and maintaining relationships to those close to them, adds the source.

While symptoms of BPD can range in intensity from one patient to the next, there are certain symptoms that may stand out more as a result of the mental illness, notes Medical News Today.

As mentioned before, individuals with this disorder will have highly volatile emotions, but can also be anxious, have high levels of separation anxiety, and display signs of depression, adds the source. There can also be risk-taking behaviors and unwarranted hostility, it adds.

The National Institute of Mental Health says there are certain factors that can raise the risk of a person developing BPD, even though the main cause “is not yet clear.” However, it points to research that suggests “genetics, brain structure and function, and environmental, cultural, and social factors play a role.”

More specifically, the Institute explains that if you have a close family member – meaning a parent or sibling – who has this disorder, you may be at higher risk. Regarding structural differences in the brain, studies have shown this disorder affects the areas that control emotions and “emotional regulation,” notes the source. Traumatic life events, including being abused or being abandoned, can also play a role.

The Mayo Clinic backs up what the National Institute of Mental Health has to say about the risk factors, specifically genetics and brain abnormalities. It goes a bit further by noting those with the disorder may have mood-related neurotransmitters such as serotonin that are not functioning as they should.

The Mayo Clinic says while a stressful childhood could lead to this disorder due to unstable or abusive caregiver relationships, the personality of the patient could play a role – if a person already has increased aggressiveness or impulsiveness, it’s not as big of a leap to BPD, it adds.

The Mayo Clinic says there could be a number of consequences to having BPD that can “damage many areas of your life,” both personally and professionally.

For example, those with the disorder may change jobs frequently or lose their position, have trouble completing their education, end up in legal hot water, have complicated or conflict-filled relationships, engage in self-harming, or wind up with unplanned pregnancies or sexually transmitted diseases (due to impulsive intercourse), it explains.

How Does a Doctor Diagnose It?

The NEA-BPD organization outlines the diagnostic criteria for the disorder, noting a diagnosis is based on 5-or more personality traits that indicate a “pervasive pattern of instability of interpersonal relationships” and “marked impulsivity beginning by early adulthood.”

The 9 signs medical professionals look for (based on the Diagnostic and Statistical Manual of Mental Disorders) include fear of abandonment, unstable/changing relationships, unstable self-image, impulsive or self-damaging behaviors, suicidal behavior, mood instability, feelings of worthlessness/sadness, anger issues, and stress-related paranoia, says the source.

It’s Not The Same as Multiple Personality Disorder

While someone with BPD can seem different from 1-day to the next, and even seem to become a different person within a few hours – it’s not to be confused with Dissociative identity disorder (DID), which was once commonly referred to as multiple personality disorder, notes VeryWell Mind.

While there are similar possible triggers and overlapping symptoms, “Over time, chronic dissociation leads to the formation of different identities,” it explains. That suggests something beyond a severe mood swing – a person with DID has multiple personalities (at least 2) that are distinctly different. However, it is possible for a patient to be diagnosed with both disorders, says VeryWell.

The Outlook is Brighter

The National Institute of Mental Health explains that although BPD has “historically been viewed as difficult to treat,” there’s newer, “evidence-based treatment” that can improve the outcome for many patients.

The source notes that in order to reap the benefits of treatment, someone who is trained in the particular field should deliver it. The time it takes for measured benefits of treatment may vary from patient to patient, so it’s important for those afflicted and their caregivers to be patient, it adds.

Looking closer at particular treatments, the Institute notes that psychotherapy can be very helpful for BPD patients – in fact, it is the “first-line treatment” before medications and other methods, it adds.

Psychotherapy is 1-on-1 or group therapy that can help patients better understand what they’re dealing with, how to improve interpersonal relationships, and how to better express themselves (in healthy ways), it adds. The source says it’s important for the therapist to build trust, as the very nature of the mental illness can make it difficult to form a bond with the patient.

The Mayo Clinic details different types of psychotherapy that may be more efficient for particular patients depending on their needs. For example, it talks about Dialectical behavior therapy (DBT), which is designed specifically for BPD and “uses a skills-based approach to teach you how to manage your emotions, tolerate distress and improve relationships,” says the source.

There’s also Schema-focused therapy, which can help you “identify unmet needs that have led to negative life patterns,” and Mentalization-based therapy (MBT), which “helps you identify your own thoughts and feelings at any given moment and create an alternate perspective on the situation,” explains the clinic. Other types of therapy that have yielded results include Transference-focused psychotherapy (TFP) that help you understand your emotions and manage interpersonal difficulties “through the developing relationship between you and your therapist,” and STEPPS, which is a 20-week program that brings caregivers into the mix. This particular approach is used in combination with other therapies, it adds.

NEA-BPD notes that medications are by no means a cure for BPD, but can help patients manage the symptoms of the condition including depression, impulsivity, and anxiety. “Often patients are treated with several medications, but there is little evidence that this approach is necessary or effective,” it notes.

While medication shouldn’t be ruled out, it’s important for the patient to talk to their doctor to understand why they’re taking each medication and what the possible side effects are, it adds.

How Patients Can Help Themselves

The same source says while medical help is important, there are certain things a BPD patient can practice to improve their outlook. These include getting regular exercise and adequate sleep.

Other positive self-care approaches include eating nutritious food, learning effective stress management, and taking any medications as prescribed. These can all further reduce the symptoms, it adds.

What Family and Friends Can Do

Those with any kind of mental illness can benefit from the attention and care of those around them, especially those in close contact they see on a daily or regular basis. “Accepting that a loved one has a personality disorder can be hard. You may feel helpless. But there are things you can do to help,” assures WebMD.

The source suggests learning as much as you can about the illness while showing love to the patient (which may not be easy if they’re lashing out – remember it’s likely the illness causing that behavior). You can also help by recognizing if the patient has become suicidal or violent, and calling for professional assistance. Remember to take care of yourself too by joining local support organizations if available in your area.