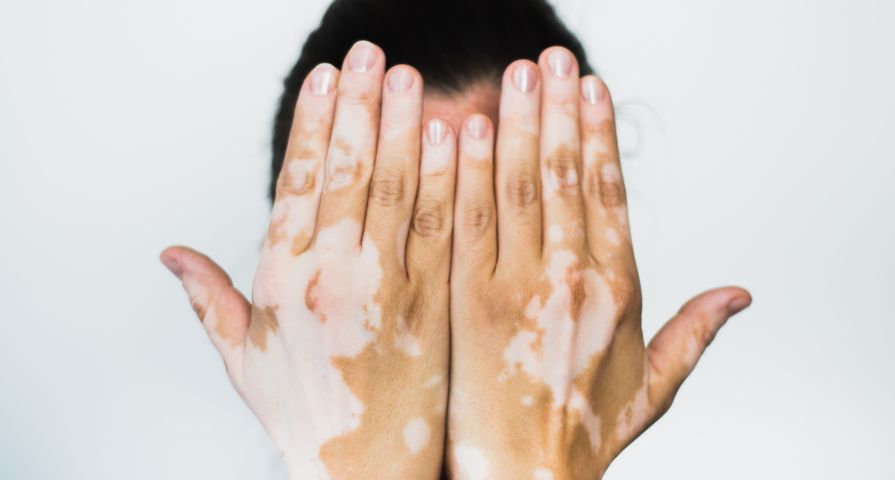 Postinflammatory hyperpigmentation (PIH) is common and represents darkening of the skin in an area of prior injury or inflammation.  The lesions may be described as irregular, darkly pigmented macules and patches.  The lesions may persist for months to years.  Conditions such as acne, psoriasis, atopic and contact dermatitis, lichen planus, trauma, drugs, and fixed-drug eruptions may lead to postinflammatory hyperpigmentation.  It may also occur after laser therapy for other skin lesions.  Dark skinned individuals are at higher risk for developing the condition.

Melasma is a common skin disorder characterized by dark patches (hyperpigmentation), primarily on the face. The cause of the disorder is unknown, but seems to be related to hormonal change.  It affects women more than men. Melasma is usually associated with pregnancy, oral contraceptives, or anti-seizure medication (e.g. phenytoin [Dilantin]).  It is so common in pregnancy that it is referred to as “the mask of pregnancy.” Melasma has no specific symptoms but causes alarm due to its appearance.

For some women, melasma resolves without intervention.  For those requiring treatment, available therapies include topical treatment with hydroquinone 3-percent or 4-percent, glycolic acid 10-percent peel, azelaic acid 20-percent cream, and retinoids (e.g. tretinoin 0.05-percent or 0.1-percent cream, adapalene [Differin] 0.1-percent or 0.3-percent gel). Keep in mind, not all cases of melasma clear with treatment. Prevention of melasma may be aided by wearing sunscreen (at least SPF 30) and wide-brimmed hats.

Solar lentigines (singular, solar lentigo), or liver spots, are benign (noncancerous), hyperpigmented, flat skin lesions occurring on the sun-exposed areas of the body. They vary in color from light yellow to dark brown. The face, hands, forearms, chest, back, and shins are the most common areas of occurrence for solar lentigines.  Caucasians and Asians are the most likely to develop solar lentigines. They are indicative of excess sun exposure (a risk factor for the development of skin cancer) and commonly appear when individuals are in their 30s.

Freckles, or ephelides, are small (one to two millimeter) flat skin lesions of uniform color.  They are commonly found on the face, neck, chest, and arms.  Freckles can range in color from red to tan to light brown and may number from a few to hundreds.  Childhood sun exposure is a common precipitating factor for their debut around ages seven or eight.  Freckles have no symptoms and are considered benign.  Individuals with red hair and green eyes are more prone to develop freckles.

The gene for freckles is a recessive trait, which means both parents are carriers of the trait resulting in its appearance in offspring.  Contrary to popular belief, freckles are not indicative of sun damage to the skin.  Prevention of freckles may be accomplished with sunscreens, wide-brimmed hats, and long pants and sleeves.  Undesired freckles can be treated similarly to solar lentigines with cryotherapy, hydroquinone, azelaic acid, glycolic acid peels, and laser therapy.

Café-au-lait is French for “coffee with milk.” The macules are most frequently observed in black children. They are congenital, considered birthmarks, and some even fade or disappear with time.  Café-au-lait macules usually do not require treatment, unless cosmetically necessary, in which case laser therapies and surgical removal are effective.

Vitiligo is a skin disease resulting in the loss of pigmentation.  Areas of hypopigmentation, or color loss, are recognized as light or white patches on the skin.  Vitiligo typically shows up on sun-exposed areas such as the hands, feet, arms, face, and lips.  The extent and rate of loss of pigmentation is unpredictable.  The disease is not life threatening or contagious.  Vitiligo can start at any age, but most commonly appears before age 20.

The exact cause of vitiligo remains unknown, but researchers feel it is mediated by an autoimmune (body attacking itself) route.  It affects approximately one percent of the general population and equally affects males and females.  There is no cure for vitiligo, but measures such as sun protection, concealers, topical steroids, phototherapy, depigmentation, and surgical grafting may improve the skin’s appearance.  Clinical trials of alternative treatments for vitiligo include ginkgo biloba only and the combination of folic acid and vitamin B-12, which have restored skin color in some individuals.

Pityriasis alba is a common skin disorder seen in children and young adults.  It is characterized by the presence of ill-defined, scaly, reddened patches of skin that subside, leaving hypopigmented areas.  Pityriasis alba often occurs in the face, with the cheeks being the most common site.  The exact cause of the disease is unknown.  It is often associated with atopic dermatitis (a chronic, itchy inflammatory skin disorder).

Pityriasis alba is usually a self-limiting disorder, which means it resolves spontaneously on its own.  The time course may be one month to ten years.  Treatment consists primarily of trigger avoidance, smart general skin care, and patient education.  Topical steroids may help with redness and itching and may accelerate repigmentation of affected skin.  Topical steroids should be used on a limited basis (less than two weeks) and with caution to prevent permanent thinning of the skin.  The prognosis, or outlook for recovery, is excellent with pityriasis alba.  Most individuals have eventual complete repigmentation of the skin with no long-term residual effects.

Tinea versicolor is a common fungal infection of the skin, which is caused by overgrowth of the yeast Malassezia.  The yeast is a normal component of the skin, but when it overgrows it may lead to loss of skin color, or hypopigmentation.  The lesions may show up on the arms, chest, neck, or back.  Tinea versicolor is one of the most common skin diseases in tropical and subtropical areas of the world.  The condition is not painful or contagious.

Risk factors contributing to the development of tinea versicolor may include hot, humid weather, oily skin, hormonal changes, and a weakened immune system.  The following may be used to treat tinea versicolor:

Postinflammatory hypopigmentation refers to a loss of skin color, or pigmentation, after skin heals from an injury. It is characterized by irregular lesions described as white, flat, and typically smooth, but may be scaly. The condition can occur in all skin types and affects men and women equally. Postinflammatory hypopigmentation may be caused by any skin injury (burns, scrapes, cuts, or surgery) or accompanying skin disorders such as acne, eczema, seborrheic dermatitis (dandruff), or psoriasis.

Albinism is a genetic defect of melanin production resulting in generalized hypopigmentation.  Melanin is produced by melanocytes in the skin.  It determines the color of hair, skin, and iris of the eye.  Albinism results from the inability to produce or distribute melanin.  As a result, individuals born with albinism will exhibit one of the following symptoms:

There is no cure for albinism.  Treatment primarily involves protection of the skin and eyes from the sun.  Sunscreen, long pants and sleeves, wide-brimmed hats, and sunglasses are all effective options for protection.  Albinism does not usually affect lifespan.  The prognosis is excellent and an individual’s activity may be only limited by intolerance of the sun.  Possible complications may include decreased vision, blindness, and skin cancer.

Piebaldism is a rare genetic disorder of melanocyte development. It is an autosomal dominant trait, which means only one of the affected genes needs to be inherited from a parent. A congenital white forelock and multiple symmetrical hypopigmented areas of skin characterize the disorder. There is an absence of melanocytes in the affected areas of skin and hair. No one knows the prevalence (how common it occurs) of piebaldism.

Piebaldism is a benign (not harmful) disorder. It is often mistaken for vitiligo, which is an unrelated skin pigmentation disorder.  The depigmented skin of piebaldism is generally considered unresponsive to medical or light treatment. Dermabrasion and skin grafts are effective surgical techniques for treatment. Transplantation of melanocytes is another treatment option and many individuals have favorable responses to this therapy. Spontaneous repigmentation in areas previously affected is very unusual.

Tuberous sclerosis is a rare genetic disorder characterized by the formation of tumors in different organs, primarily in the brain, eyes, heart, kidney, skin, and lungs. Abnormal skin pigmentation, specifically hypopigmentation, is a major diagnostic feature of tuberous sclerosis and diagnosis requires more than three patches of white skin.  At least two children are born each day with the disease. Most individuals with tuberous sclerosis have a normal life span.

There is no cure for tuberous sclerosis. Early diagnosis and intervention can help individuals avoid or overcome developmental delays.  Seizures, a common complication, may respond to anti-seizure drugs.  Complications of neurological, or brain, involvement are the most common cause of morbidity (sickness/hospitalization) and mortality (death). Kidney, or renal, complications are the next most frequent cause of morbidity and mortality.

Foods That Keep Your Skin Looking and Feeling Healthy