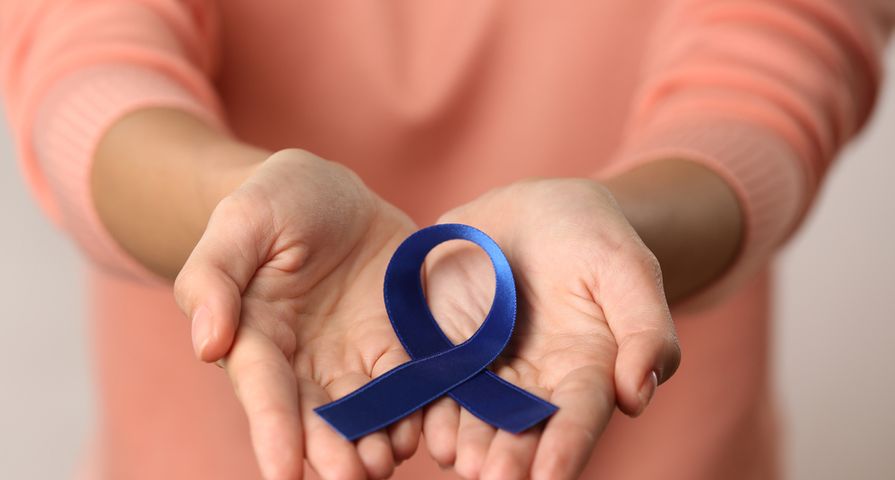 Colon cancer is one of the most common types of cancer that strike men and women in the U.S. In fact, the American Cancer Society says it’s the third leading diagnosis among cancers in the country.

The society estimates there will be 97,220 new cases of colon cancer and 43,030 new cases of rectal cancer in 2018, with 50,630 fatalities expected from them combined. Fortunately, more effective screening and early removal of polyps before they can develop into cancer is driving down mortality rates. Let’s take a look at 12 things to know about colon cancer…

Symptoms To Watch Out For

The Mayo Clinic explains that polyps, which are clumps of cells that grow in the lining of the large intestine, don’t usually have any symptoms on their own. However, you may start to notice some unusual signs that could warrant a trip to the doctor.

For example, the source notes diarrhea or constipation that persists longer than 4-weeks, rectal bleeding, prolonged abdominal discomfort, weakness and fatigue, and unexplained weight loss can all be tied to colon cancer.

When to Consult a Doctor

The same source says to not hesitate if you notice any of the aforementioned symptoms, particularly blood in the stool or “an ongoing change in bowel habits.”

You can also talk with your doctor about when is an appropriate time to start screening for colon cancer, although the clinic notes that guidelines generally suggest screening for this type of cancer at age 45 or 50 depending on the recommending organization.

MedicalNewsToday.com explains the exact causes of colon cancer are not known, but most cases begin with benign (non-cancerous) polyps in the walls of the large intestine. There are two types of polyps: adenomas (which look like normal intestinal lining but can be detected under a microscope) and hyperplastic (which are usually benign and don’t often lead to cancers).

The cancer may also be tied to genes (we’ll get more into that) or having underlying medical conditions, such as diabetes or inflammatory bowel disease (such as Crohn’s), adds the source.

May Be in the Genes

One type is called hereditary nonpolyposis colorectal cancer (HNPCC), otherwise known as Lynch syndrome, which can lead to a colon cancer diagnosis before age 50. The other gene-related type is familial adenomatous polyposis (FAP), which is a “rare disorder that causes you to develop thousands of polyps in the lining of your colon and rectum,” it adds. Those with untreated FAP are at greater risk of developing colon cancer before age 40, says the clinic.

Aside from the possible causes and risk factors we’ve already mentioned, there are other risks associated with lifestyle. MedicalNewsToday explains colon cancer is more likely to occur in people with sedentary lifestyles, in other words, those who get little to no physical activity.

Other risk factors tied to lifestyle include smoking and obesity, but the latter can be from genes rather than diet, or a combination of both.

The American Cancer Society says aside from how much you eat (which could lead to obesity if you’re predisposed to weight gain), the types of foods you eat may play a role in developing colorectal cancers as well, which includes both colon and rectal cancers.

The society says diets high in fruits and vegetables, as well as high in whole grains and low in red meats, have been tied to lower risk levels of colorectal cancers. Red meat, such as beef, pork, and lamb, as well as processed meats, such as hot dogs, sausage and lunch meat, have been found by several studies to increase risk, adds the source.

What’s Behind the Screen?

The National Cancer Institute says there are several methods used to screen for colon cancer. The methods include the high-sensitivity fecal occult blood test (FOBT), which checks for traces of blood in the stool that aren’t obvious.

Other methods noted by the source include the stool DNA test (FIT-DNA), which not only detects blood in the stool but also DNA markers and genes linked to colon cancer. Of course, there’s also the standard colonoscopy, in which the entire colon is examined with a flexible tube that can transmit images and collect tissue samples (while removing any abnormal growths such as polyps). The double-contrast barium enema (DCBE) involves X-rays of the colon and rectum after using a barium solution to clean out the colon. This particular method is usually only used for those who are at risk for complications from a colonoscopy.

How is it Diagnosed?

Your doctor will collect a sample of tissue (biopsy) if any abnormalities are found during the screening process, explains WebMD. The tissue will then be examined to determine whether it’s benign (non-cancerous) or malignant.

If the biopsy confirms cancer cells are present, then the doctor will likely take additional scans of your body to ensure the cancer hasn’t spread, notes the source. Blood tests can also be used to detect higher levels of carcinoembryonic antigen (CEA), which has been tied to colorectal cancer.

Aside from getting screened, there are lifestyle tips from the American Cancer Society to help you avoid getting colorectal cancers. They include eating more fruit, veggies and whole grains; getting regular exercise; and controlling your weight (you may need the help of a doctor or dietician to determine a healthy target weight).

The society also says that cutting down on your alcohol consumption (no more than two drinks per day for men, and one drink per day for women) and ditching your cigarettes are other ways to limit the risk. The society has a Guide to Quitting Smoking if you need some help, or you can see your doctor for options.

The Stages of Colon Cancer

Colon cancer will present in stages, which makes it all the more important to be screened for early treatment. The National Cancer Institute explains there are five stages, ranging from 0 to IV.

The American Cancer Society says treatment of colon cancer is largely based on what stage you’re in. For example, treatment for stage 0 involves surgery to remove the cancer (usually by removing polyps).

Stage I treatment may involve more surgery, including the removal of the affected part of the colon (used typically when there polyps aren’t involved). The same approach is similar for stage II.

In stage III, doctors may recommend surgery to remove the affected section of colon and any affected lymph nodes, followed by chemotherapy. Radiation and chemotherapy may be the only options for those not healthy enough for surgery.

In stage IV, surgery is not usually an effective option, and chemotherapy may be the first line of defense if the cancer is too advanced for surgical removal, says the source. Targeted therapies may also be used at this stage, and an immunotherapy drug (such as pembrolizumab [Keytruda]) may be used after initial chemotherapy.