Home » Your Health » Common Signs and Symptoms of Bulimia 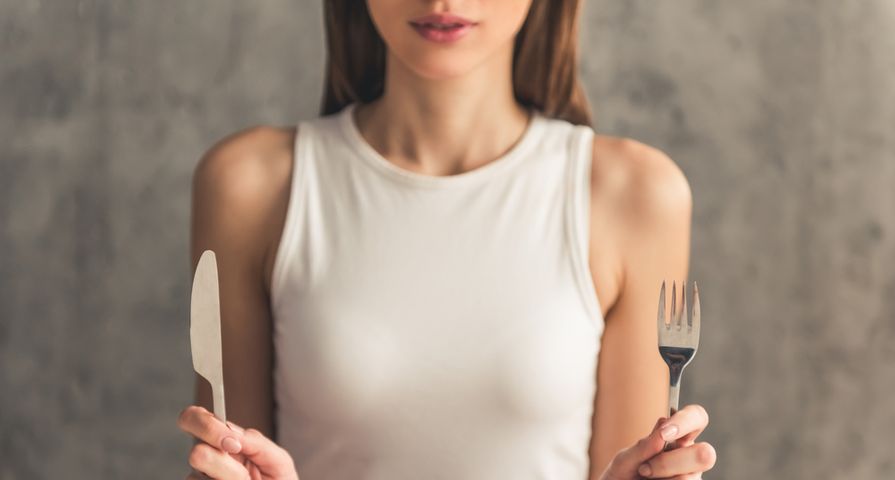 Bulimia nervosa—more commonly referred to as simply bulimia—is an eating disorder and mental health condition in which a person binges foods, and then proceeds to purge it in order to prevent weight gain.

Although it typically affects young women, starting in their mid-to-late teens, the NHS says, “Men and women of any age can get bulimia.” As the disorder can be potentially life threatening, it’s important to recognize the signs and symptoms in order to assist a loved one in getting the help they need as soon as possible. The following are the 12 most common to look out for.

Binge eating is likely among the most recognizable signs of bulimia. You may notice a loved one “eating larger amounts of food than most people would in a similar situation,” indicates WebMD, and often in a period of two hours or less. They tend to choose snack foods or others items that are high in calories.

And, once a binge episode begins, they also tend to lack control over their food consumption, often feeling that they are unable to stop eating.

After a binge episode has ended, you may notice that they disappear quite quickly, often excusing themselves to go to the bathroom. It is here that they engage in purging behaviors to try and prevent weight gain from all of the food that was eaten.

These purging tactics may include self-induced vomiting, or the use medicines such as laxatives, diuretics, enemas, or ipecac syrup. WebMD warns, however, that misusing or abusing such medicine “can lead to serious health problems and even death.”

Instead of self-induced vomiting or use of laxatives, some people with bulimia purge by excessively exercising, oftentimes for hours on end. They tend to be rigid with their regimen, exercising regardless of “weather, fatigue, illness, or injury,” says the National Eating Disorders Association.

According to Walden Eating Disorders Treatment, “This form of bulimia is becoming increasingly common in males.” And HelpGuide.org indicates that common activities often include “high-intensity calorie burners such as running or aerobics.”

Like those with anorexia, people with bulimia often have an intense fear of gaining weight—which is why they purge after binging—but they often have a different way of showing it.

Walden Eating Disorders Treatment says they may “express strong dissatisfaction with their body type or appearance,” in addition to constantly “talking…about dieting, food, shape and appearance.” This is because people with bulimia base their self-esteem and value upon these physical characteristics.

Many people with bulimia tend to maintain a normal body weight, or are even slightly overweight in appearance, which can make it more challenging to identify whether they are struggling with the disorder.

In some cases, however, individuals may experience noticeable weight fluctuations. These fluctuations occur frequently, and can be both up and down, often by “10 pounds or more due to alternating binging and purging,” says HelpGuide.org.

People with bulimia often struggle with a variety of gastrointestinal issues, including stomach cramps, constipation and acid reflux. This is because “The cycle of binging and purging…takes a toll on your digestive system,” indicates Healthline.com.

With acid reflux, for instance, Mirror-mirror.org says that it most commonly occurs “due to repeated bouts of self-induced vomiting.” The source adds that bulimia can also lead to functional gut disorders, where the body’s normal digestive functioning becomes impaired, causing issues such as “delayed movement of food through the digestive tract” and “hypersensitivity of intestinal nerve cells.”

In women with bulimia, irregularities of the menstrual cycle are also very common. These irregularities can include amenorrhea—the absence of a period—or “only having a period while on hormonal contraceptives,” which the National Eating Disorders Association indicates is “not considered a ‘true’ period.”

As a result, they may have trouble conceiving, because bulimia can lead to infertility. But, should they get pregnant, Healthline.com says women with bulimia are more likely to experience complications, including miscarriage, gestational diabetes, and postpartum depression.

8. Cuts, Calluses, or Scarring on Hands

Another physical symptom to look out for is cuts, calluses, or scarring on a person’s hands. These markings may appear “across the top of finger joints,” says the National Eating Disorders Association, or on the knuckles or backs of their hands (which is known as Russell’s sign).

Such injuries result due to an individual repeatedly sticking their fingers down their throat, and therefore will only appear on those who frequently use them to self-induce vomiting.

Just as the hand markings mentioned previously only occur in those who self-induce vomiting, so too do dental issues. According to Walden Eating Disorders Treatment, “Frequent vomiting builds up acid levels in the mouth.”

Over time, the source says, this high acidity can lead to “tooth decay, erosion, discoloration and even loss of teeth.” The U.S. Department of Health & Human Services adds that teeth may “look clear instead of white and are increasingly sensitive.”

Severe and chronic dehydration is another common symptom of bulimia. Walden Eating Disorders Treatment explains: “Self-induced vomiting and laxative abuse can deprive individuals of adequate potassium and calcium, which can then result in severe electrolyte imbalances and dehydration.”

HelpGuide.org says insufficient potassium levels, in particular, “can trigger a wide range of symptoms ranging from lethargy and cloudy thinking to irregular heartbeat and death.” The source adds that inadequate potassium can also potentially lead to kidney failure.

Telltale Traits of a Sociopath

You may also notice that a person with bulimia has unusual swelling in their jaw area or cheeks (referred to as ‘chipmunk cheeks’). Rosewood Centers for Eating Disorders indicates these are “side effects indicating swollen salivary glands.”

BulimiaHelp.org explains that these glands become swollen due to water retention, as they are “working to over compensate the loss of fluid elsewhere in the body” that results from constant purging.

Constant purging can also lead to injuries in the throat and lining of the mouth. These may be the result of inserting objects (including the fingers) down the throat in order to induce vomiting.

Additionally, the vomiting itself can also cause problems. The tissue in the throat and mouth is sensitive, and repeated exposure to stomach acid can cause a sore and irritated throat, or persistent sores and lacerations. The sheer force of vomiting can also lead to broken blood vessels in the eyes, causing the person to appear bloodshot.