Signs Indicating You May Have West Nile Virus 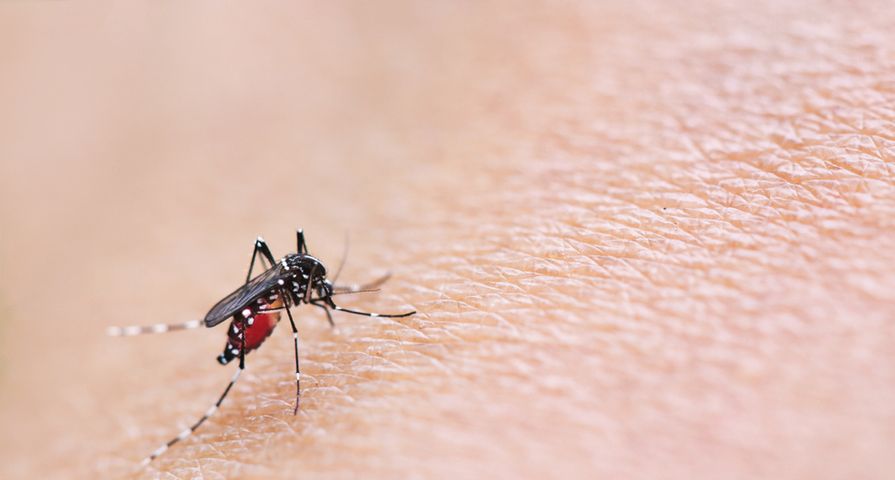 Did you know that 80-percent of people bitten by a West Nile virus-carrying mosquito show no symptoms of the disease? The remaining 20-percent usually only experience mild flu-like symptoms—such as chills, fever, headache, muscle weakness, nausea, and vomiting—which disappear within a few days’ time.

Less than 1-percent of those bitten by a mosquito with West Nile virus (WNV) develop West Nile encephalitis, a serious inflammation of the brain and surrounding tissues, which can last several weeks and cause paralyzing neurological effects, such as the following…

Swollen lymph glands, especially the pea-sized oval glands in the neck, often result as a normal immune system response to an infection such as WNV. The glands will swell in response to the body attempting to ward off the infection. If you have a fever from the virus, your glands may swell, but this symptom does not occur for everyone who has a fever. Depending on the severity of the virus and accompanying fever, you may or may not be able to see the swelling in your neck that are swollen lymph glands.

According to the World Health Organization (WHO), about 20-percent of people infected with the WNV will develop West Nile fever, so your chances of swollen glands are relatively low, as not all cases result in swollen glands. There are many other viruses and infections that can cause swollen glands, because it’s your body’s natural response to fight against infections.

A patchy, red skin rash on the chest, back, or stomach is also typical with WNV. The rash may sometimes be mistaken for measles, because it appears as small, raised lesions. Rashes are usually considered a mild symptom, and many people with West Nile fever don’t ever develop a rash. These rashes are prone to the trunk of your body (or torso), but there have been some reports of the rash beginning on the head and neck as well as the upper and lower limbs. Quite often it will spread and patients will have the rash in several places on their body.

West Nile fever manifests as mild and flu-like, along with other physical and neurological signs. This can be concerning as the fever is typically excused as a routine bout of influenza (or the “flu”), because it’s accompanied by other flu-like symptoms, such as malaise, fatigue, headache, and muscle aches. There can be serious and permanent medical issues if West Nile fever worsens.

Fevers from the WNV are usually considered a mild symptom at the onset, but if the fever is persistent and rising, it can turn into a serious issue. High fever can also be a symptom of other diseases you are more susceptible to when fighting the virus, or developing diseases that are caused by it. Because of this, tracking your fever and other symptoms is important, as other symptoms may develop at the same time the fever increases, such as disorientation, tremors, and muscle weakness. If this happens, it’s important to seek emergency medical attention.

Headaches are common with serious WNV infection due to the onset of encephalitis, which causes brain tissues to swell causing a series of migraine-, tension-, and cluster-like headaches. Because headaches are such a common occurrence and there are so many causes (from food or stress to serious head trauma or infections), it can be difficult to diagnose WNV from a headache. A mild headache and other mild symptoms usually go away on their own, but not if they are due to WNV.

You’re likely to experience more than just a headache if you have West Nile fever, including mild fever, body aches, and fatigue. That said, if your headache is severe and other serious symptoms are present, you should be examined by a doctor as soon as possible. Serious neurological issues can develop from West Nile fever, some of which that can’t be reversed. You may even require hospitalization to treat your symptoms and other diseases you develop as a result of WNV.

Another symptom of WNV that can be caused by so many different illnesses and medical conditions is a stiff neck. Although a stiff neck doesn’t sound very serious, it’s actually considered a sign of serious infection from WNV. While there isn’t a specific medication to treat and cure many of the serious complications of West Nile fever, hospitalization ensures the patient gets enough fluid, can help prevent other infections from developing, and can provide respiratory support if required.

Disorientation with WNV is very common in serious cases where inflammation of the brain occurs, resulting in stupor (a sleepy state where the victim lacks critical cognitive function and becomes almost entirely unresponsive). They may experience disorientation, delirium, and confusion. It can also increase lethargy, and it may be difficult to wake the patient from sleep and keep them awake.

Unfortunately, there’s only so much swelling and inflammation your brain can endure. If the swelling continues to worsen, it could eventually cause the patient to become completely unresponsive and slip into a coma. People with this more severe symptom can experience long-term effects from the inflammation, but it varies widely and is dependent on the patient and additional infections and diseases from the virus. The good news is that less than 1-percent of people who contract WNV end up with serious symptoms or other diseases from the virus.

In severe cases of WNV, encephalitis and/or meningitis can cause the tissues surrounding the brain and spinal cord to become inflamed and the pressure may cause swelling and totally block blood flow to the brain, causing a total loss of consciousness or coma. The longer the severe symptoms of WNV go untreated and unmonitored, the greater the potential for permanent damage. When West Nile fever is serious, treatment and support to help address neurological symptoms is vital for the best chance at full recovery, so don’t ignore serious symptoms.

When someone goes into a state of unresponsiveness (a coma) when they aren’t currently hospitalized and in turn, aren’t being monitored by a medical team, it should be considered a medical emergency and an ambulance should be called right away. The longer a person is in a coma without being tested, monitored, and treated, the greater the potential for serious, lasting effects. Any serious symptoms should be examined by a doctor for a course of treatment or support to help the patient.

Severe cases of WNV can lead to convulsions, shaking tremors, or seizures if encephalitis (an inflammation of the brain) or meningitis (an inflammation of the tissues around the brain and spinal cord) occur, causing serious neurological symptoms. Tremors are typically limited to the upper extremities (and are often misinterpreted as seizures), whereas seizures can occur in some cases.

Unfortunately, there’s evidence that many people with severe symptoms and accompanying diseases from the virus experience symptoms years later. Research has shown that serious and severe symptoms typically go away within two years, but if patients experience symptoms after the two year mark they’re likely to continue to experience them for the rest of their lives. According to research funded by the National Institutes of Health (NIH), tremors can be permanent, along with memory loss and loss of balance. The chances of this happening varies depending on the secondary disease, for example, those with encephalitis are less likely to fully recover.

A study published by the Oxford University Press determined that permanent damage can occur to the optic nerve. The study highlighted the speed at which WNV has spread in the United States, and the potential for permanent loss of vision and eye pain. Depending on the patient, the vision loss and pain can be relegated to one or both eyes and recovery of vision can occur in one eye but not the other. It is also possible to have zero pain in one eye, with lasting pain present in the other eye.

The numbness and paralysis associated with West Nile encephalitis is known as acute flaccid paralysis, a fatal syndrome that mimics polio with a total loss of muscle function to one or more limbs. Paralysis from WNV or resulting diseases and infections is very rare but possible. This further reinforces the fact that any symptoms more serious than the mild flu-like symptoms from West Nile fever should be examined as soon as you get them. Go to your doctor or the emergency room if serious symptoms are observed.

Although some people die from the WNV, paralysis is not always permanent and doesn’t mean you’re going to die. There have been patients that have fully recovered from paralysis, with no lifelong effects. Intense physical therapy is often needed to get full range of joints and control of muscles. It’s also important to note that serious symptoms can begin quickly. You could go from dealing with what feels like the common cold or flu to all of a sudden experiencing high fever, tremors, and even paralysis.