Home » Your Health » Facts on Hemochromatosis 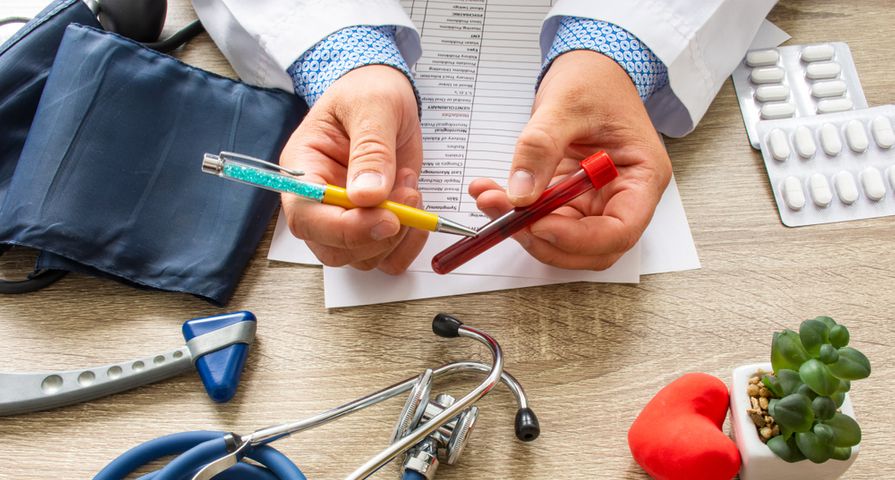 Hemochromatosis might not be something you’ve heard of—even though a lot of people have this health condition—but it’s a widespread type of iron storage disease that causes your body to store excess iron at dangerously high levels. Over time and if left untreated or undiagnosed, the extra iron in your body can cause damage to several vital organs. Since many of the symptoms of hemochromatosis aren’t unique to the disease (there are several other diseases that can cause the same symptoms) it can be difficult for a doctor to recognize the cause. Although it can be difficult to diagnose, hemochromatosis is one of the most common genetic diseases in North America.

Whether you’re dealing with symptoms from an unknown medical condition, have recently been diagnosed, or just want to know more about this common disease, read on for 10 important facts on hemochromatosis…

Excess Iron is Stored in More Than Your Liver

When you have hemochromatosis, your body is unable to absorb the right amount of iron, resulting in a build up. Since your liver is in charge of many important functions, including storing essential nutrients in your body, it’s unsurprising that hemochromatosis can harm your liver because some of the excess iron is stored there. Excess iron can also be stored in pretty much all of your organs, but a lot of it is stored in your heart and pancreas, making the disease even more serious because of the potential implications and long-term damage to these vital organs.

Excess iron stored in your organs is basically like a poison to them—it’s toxic and will eventually cause serious problems or even death. With the overload of iron that’s poisoning your organs, you can begin to experience symptoms all over your body, some of which include include stomach pain, joint pain, and loss of sex drive, the disease isn’t limited by any means.

Unfortunately, familial genetics play a significant role in developing hemochromatosis—it’s actually the most common way to develop the disease. The Mayo Clinic identifies two HFE gene mutations that cause the disease, one of which is found in 85-percent of people with hereditary hemochromatosis. HFE regulates the amount of iron you absorb from food, and these mutated genes cause you to absorb too much. Inheriting one gene mutation won’t cause hemochromatosis, but if both parents have a gene mutation it can be passed down to their child and increase their risk of developing the disease.

While hereditary hemochromatosis is the most prevalent, you could also develop it in other ways, specifically from other diseases. This type of hemochromatosis that isn’t passed from parents to child is referred to as secondary hemochromatosis. Some of these secondary causes include anemia (when the body can’t carry the required amount of oxygen to your tissues because of a lack of healthy red blood cells), as well as various types of chronic liver disease.

Symptoms and Severity Can Vary

There are so many potential signs and symptoms of all forms of hemochromatosis, as well as levels of severity which makes it difficult for doctors to diagnose the disease early on – this isn’t good news for those who have it, since catching it early is vital to ensure you at least slow the progression of the disease and prevent the development of other severe diseases. The Center for Disease Control and Prevention (CDC) lists the early symptoms people with hemochromatosis could experience, from fatigue and weakness and weight loss and abdominal pain.

As the disease progresses and iron begins to build up in other organs, the patient could start to lose body hair, women may miss menstrual cycles, loss of sex drive, and shortness of breath. The severity of the symptoms continues, with advanced cases causing arthritis, liver disease, diabetes, heart problems, and gray or bronze-colored skin. How quickly patients progress to the worse symptoms varies, and partly depends on which organs have been affected by an increase of iron.

As previously mentioned, it can be difficult to diagnose hemochromatosis and recognize the symptoms for what they are—so many of the symptoms are also common symptoms of other medical conditions and diseases. But in general, it’s typical for symptoms of hemochromatosis to when you’ve reached middle-age. It’s not that you develop the disease at that point, in fact, hereditary hemochromatosis is present from birth, but the iron storage levels build and build over the years, with symptoms starting when they are high enough to begin interfering with regular organ function.

There are three other forms of hemochromatosis that develop earlier than middle age—juvenile, neonatal and secondary. Teenagers and those up to around 30 years old who experience symptoms are considered to have juvenile hemochromatosis. With neonatal hemochromatosis, the fetus builds up a dangerously high level of iron in its liver, harming and interfering with the healthy development of the fetus. Secondary hemochromatosis is caused by other often serious diseases, like chronic liver disease.

Early Testing and Screening Is Important

It’s obviously best for any disease to be diagnosed as early as possible through the proper tests and screening procedures. Catching medical problems early on often greatly increases your chances of avoiding long-term damage and effects, and could even save your life. This is most definitely the case with hemochromatosis, so when you’re displaying any symptoms that aren’t normal, be persistent with your doctor in finding the cause. There are blood tests that can be done to diagnose or rule out hemochromatosis.

If there’s a history of the disease in your family, or if a sibling, parent or child is diagnosed, direct family members should go in for screening. When someone that close to you has hemochromatosis, your chances of also having it go up by about 25-percent. A number of specialists, from hematologists and cardiologists to gastroenterologists and rheumatologists, often get involved depending on your symptoms and medical history. They’ll help diagnose the disease and decide on the right course of treatment.

A Complete Guide to Understanding Your Bloodwork Results

It Could Lead to Life-Threatening Illnesses

Since hemochromatosis is toxic to your body and can negatively affect all of your organs, if left untreated it will lead to life-threatening diseases. The organs typically most affected by the excess iron your body stores when you have hemochromatosis are your heart, liver and pancreas, all three of which can fail and lead to death. For your heart, the extra iron prevents it from circulating your blood properly, which is known as congestive heart failure, as well as lead to arrhythmia, an abnormal heartbeat. Excess iron in the liver can cause cirrhosis and lead to liver cancer.

The harmful effect of hemochromatosis on the pancreas can cause diabetes, since the pancreas is unable to function properly. It’s actually quite common for hemochromatosis to be called “bronze diabetes” because many people who have it experience a discoloration of their skin—it often turns the skin into a bronze and gray shade.

It would be ideal if once you’ve been diagnosed with hemochromatosis and are ready to begin treatment to know how long the treatment will take. But unfortunately, length of treatment could range from a couple months to a few years, depending on the patient and the damage already done to various organs. Even once treatment is complete, the patient’s iron levels have to be monitored fairly regularly to make sure the iron in their body stays at a safe level.

The way to treat hemochromatosis is through phlebotomy, which is essentially blood letting. About once a week, blood is taken from the patient to remove iron. The blood left in the body naturally pulls iron to replace the red blood cells they’ve lost, removing it from organs that have a high level of iron stored in them. This seems to be a very effective treatment, though preventing the body from storing excess iron can also be done by avoiding supplements that contain iron.

Ordinary Diets Can Cause Hemochromatosis

When you think of the many serious medical conditions and diseases, there’s often something you can do to help lower your risk of developing them. For example, many forms of heart disease could be prevented by eating well and exercising regularly. Or at the very least, certain habits could decrease your chances or stall the development of many diseases. But with hereditary hemochromatosis, an otherwise healthy person who lives a balanced, healthy lifestyle could easily develop the disease.

With the most common form of hemochromatosis being hereditary, it’s your genes—not your lifestyle—that causes you to build up and store an excessive, dangerous amount of iron if your genes. If you display the symptoms of hemochromatosis, get to your doctor. In many cases, hemochromatosis is not something you can prevent, but being diagnosed early on could save you from other life-threatening diseases as a result of hemochromatosis. It’s important you don’t assume you’re safe just because you’re healthy.

Some Damage Can Be Reversed

The possible complications of hemochromatosis can be scary because many of the effects can be quite serious. With the disease storing extra iron and essentially poisoning your organs, you’re at risk of serious and many life-threatening diseases. Cirrhosis is a common disease caused by hemochromatosis, and is the result of long-term liver disease. Cirrhosis is essentially scar tissue on your liver. It replaces healthy, normal liver tissue with dead scar tissue, and if left untreated could eventually lead to liver failure and death.

Although cirrhosis of the liver is a serious and often fatal disease, if hemochromatosis is diagnosed and treated early enough you can prevent the development of cirrhosis. There will still be damage to the liver, but much of it can be completely reversed if you haven’t developed cirrhosis yet. The fact that there’s a good chance to reverse some damage, this reinforces the importance of getting diagnosed early on.

Bad Habits That Can Hurt Your Liver

Some Lifestyle Changes Can Lower the Risk

Even though the most common form of hemochromatosis is hereditary, there are a few lifestyle habits that could reduce your risk of acquiring the disease—or being surprised later in life after the disease has already damaged your organs beyond repair. Avoid iron supplements if they aren’t needed, as well as vitamin C because it can cause your body to store more iron. It’s also best to limit your alcohol consumption, since alcohol increases your risk of liver disease.

On top of these lifestyle habits that could prevent non-hereditary hemochromatosis, there’s also the option to be tested for the mutated genes that cause it. This can be done way before you reach the typical age later in life when symptoms begin to present themselves. Many people choose to do screening and if tested positive, their iron levels will be monitored for the rest of their lives. Doing so will greatly reduce the chance of permanent damage, since treatment will occur before the iron hits dangerous levels.