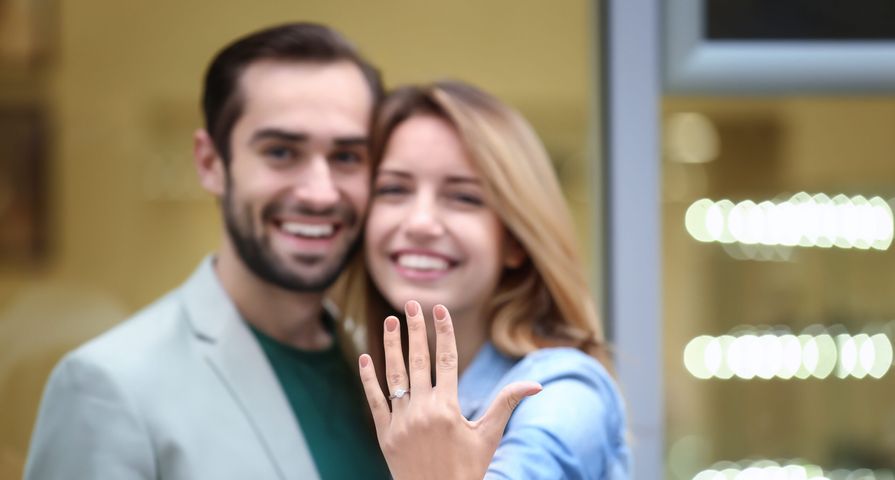 The pandemic had put the wedding industry mostly on hold. However, we are now starting to see more and more people think about tying the knot again. Just last week, I had two of my friends announce their engagement. I don’t dare to claim I know everything about why the ring is such a big deal. But to many, the rock on the bride-to-be’s finger can sometimes generate a bigger conversation than the significant event itself.

Still, some people are saying you need to spend three month’s worth of salary on the rock. Some of my friends make $100,000 a year. Do they really need to spend $20,000 to $25,000 on an engagement ring? Will the girlfriend say no if she sees jewelry that’s not as extravagant as she hoped? As with most things finance, the choice is completely personal. But what type of pressure are we putting on the groom-to-be here?

11. The Engagement Ring Rule of Thumb

Let’s talk about the rule of thumb first. The commonly accepted idea is to spend three months’ salary on an engagement ring. Like I said, some of my friends make six figures a year. While $25,000 sound incredible to spend on jewelry, it’s actually more incredible to expect someone who makes $3,000 a month to spend $9,000 on an engagement ring. That’s because someone making $3,000 is probably not saving an awful lot, especially if he’s living on his own. That $9,000 could amount to years of savings.

Is a groom expected to start their financial journey from scratch again, just because he wants to commit to the relationship? Yes, spending a fortune does, in a way, show how much he’s willing to commit. However, it could be bankrupting the future husband before his new life even gets stared. I guess it’s still better than borrowing money on his credit card to buy a ring, which is sadly very common. 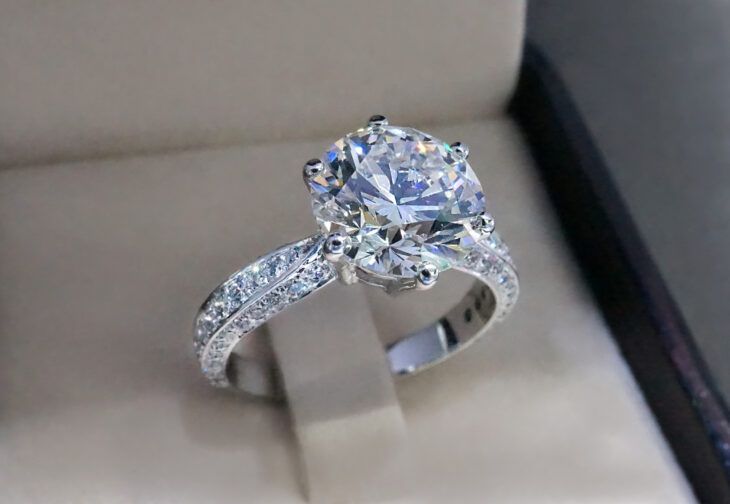 The “how else can three months salary last forever” schtick? It’s fake. Completely made up. It’s nothing more than marketing slogan invented by companies wanting you to spend more on their rings. That number is nuts to me, to be honest. This rule of thumb means an engagement ring basically costs as much as a common sedan. That’s crazy. Don’t put yourself into a major financial hole just because you’ve been swayed by some nifty advertising. Do some math and make a choice that you can live with — and pay for. 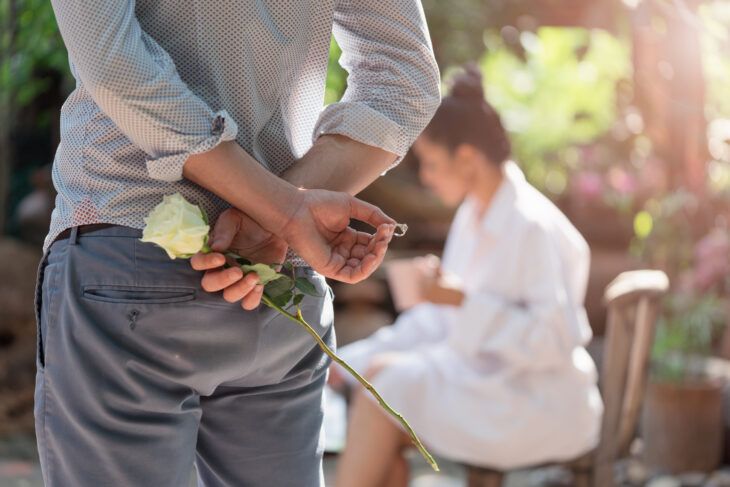 The three months’ salary can make sense, I suppose, for young couples who are starting out if they are going to be sharing the financial responsibility. When my wife and I got engaged, I just started working and three times my monthly salary wasn’t that much yet. We were also moving in together, so we could save a good chunk of living costs. I also had practically no other expenses at the time, so it didn’t take long for us to save up the amount I spent on the ring. Luckily, I was able to cover that amount without going into massive debt. That shortened the time it took to pay for the ring too.

However, as people get older, the amount that constitutes their salary for three months also goes up. You need to ask yourself when you are faced with a ring decision: Do you want to spend more on the engagement ring than on the whole wedding budget itself? Do you want to use your savings on jewelry or do you want to use it to live a higher quality of life? And if you truly need to finance the ring, you must realize that it’s going to cost quite a bit more by the time all the interest charges are figured in. 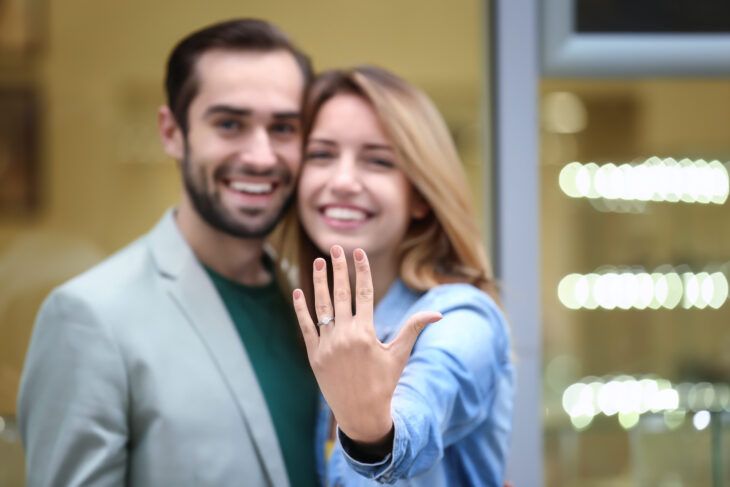 Not everyone in the world is materialistic, but the fact of the matter is that an engagement ring brings out the materialism in all of us. And it’s not just the bride either. You have to remember that the person you want to marry is going to be showing everyone she knows her finger for the foreseeable future. What will her friends say when they see the ring? Will they make comments about how the rock is too small and thus hurt her feelings?

Going big can also backfire. If you get an incredibly expensive ring, will your bride’s friends all become jealous and resent her? Don’t assume this is a ridiculous situation to suggest. I’ve seen with my own eyes how these big purchases can sow the seed that ultimately make friends drift away from each other. And it can get even more ridiculous. I have even seen how a husband making purchases for their wife make her friend’s husband resent the person who bought the gift!

You’ll be right to say that those people who have these friends are better off without them, but the reality is that these thinly built relationships exist all around for all sorts of reasons and people who are in them do get hurt when the separation happens. 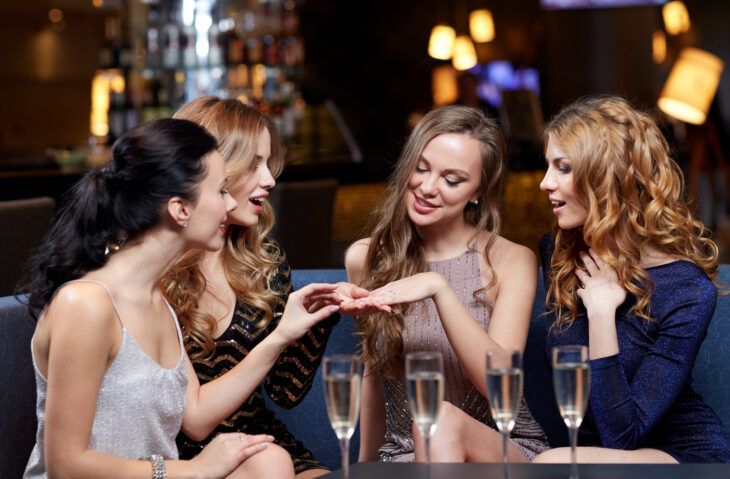 7. It’s Not Just Her Friends

Her family is also going to chime in on what they think. No, I don’t think they will abandon her because of the size or price of the engagement ring you bring her, but it would go a long way if you get a ring that’s suitable for everyone’s expectations.

Go too small and her mom may worry that her daughter isn’t marrying someone who cares enough about her. Go too big and her dad may worry that you won’t be financially responsible enough to take care of her. It may sound impossible to thread the needle, but the good news is that the sweet spot is pretty big for you to hit the mark. You just have to spend the time to think it through. 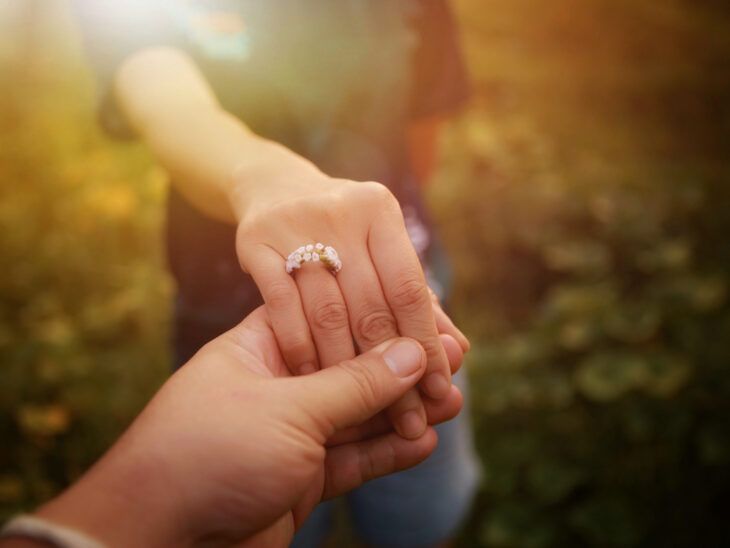 I remember how my wife came home one day and told me how her male friend was telling a funny story of how the retail clerk suggested a ring with a smaller diamond for his bride because she had small hands. And while my wife’s male friend was telling the story because he felt he dodged an expensive bullet, the truth is that a diamond CAN seem too big on certain fingers.

Don’t worry if you still want to spend a whole bunch to show your love though because there are plenty of nice but small diamonds. Many people who aren’t into diamonds just see size, but there are many qualities of a diamond that can make it special. Each diamond worth anything is graded by the Gemological Institute of America (GIA) based on the famous 4Cs: Cut, Color, Clarity, Carats. In fact, diamonds will come with the certifications so if your ring doesn’t come with one, then you can assume that the diamond set on the ring is of lesser quality. While you are out shopping, only carats determine the size of the rock so pay attention to the other 3Cs as well. 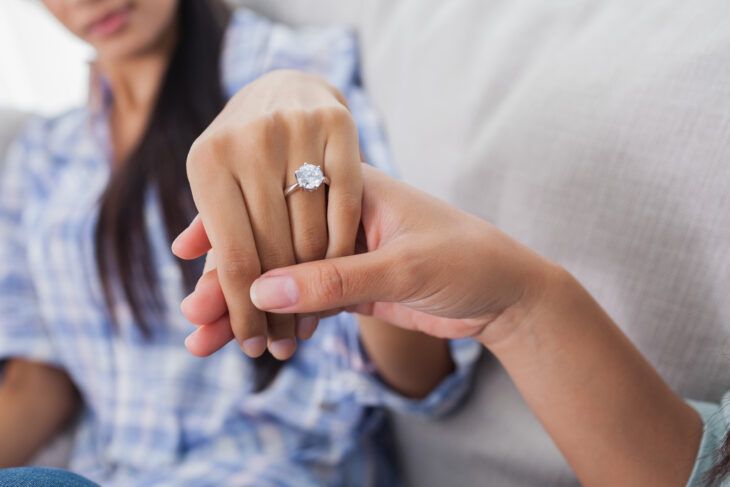 5. Is It Better to Spend Everything on Just a Ring?

I’ve gone through this shopping trip so I know a thing or two about high-priced jewelry. You can literally get a ring that cost $5,000, or get one that seems practically the same that cost $10,000. When you are in the store, you’ll be convinced why the more expensive version is worth twice the cost. And while someone who’s really into these things can spot the difference right away, you have to decide if the person you are marrying will know (or even care).

Plus, money is fungible. What you don’t spend on the ring can still be put to good use for her. If things go as planned, the love of your life will be going to the wedding. Instead of spending that extra $5,000, you could use that to instead buy her a nice bracelet and necklace to wear on the special day. 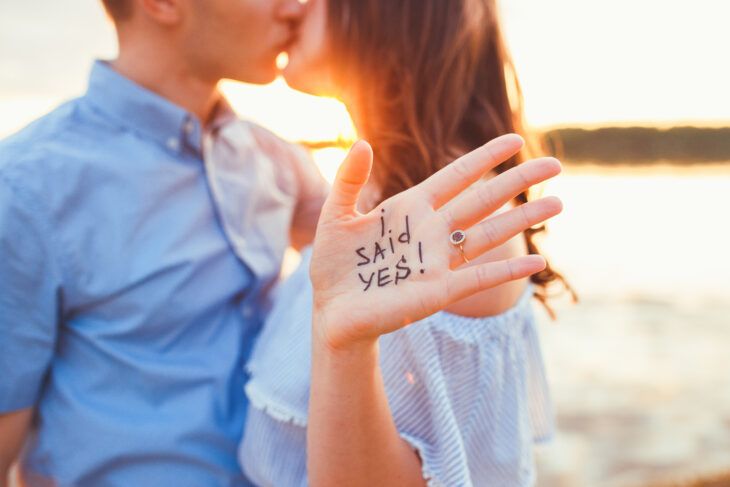 On the other hand, you only get an engagement ring once (hopefully). It represents a memory that will last forever. For some people, it’s worth the extra money to buy something amazing. After all, a diamond is forever. (Another marketing slogan you shouldn’t fall for!)

You should think about how much the bride values a diamond ring. Would she be happier with a piece of jewelry everyone can see from a mile away? Or would she rather have you save that sum, so you can use it on your combined lifestyle when the two of you are living together? That $20,000 goes a long way towards a house down payment. Or re-doing a nursery for future children. Or simply sitting in a long-term investment, growing for your golden years. 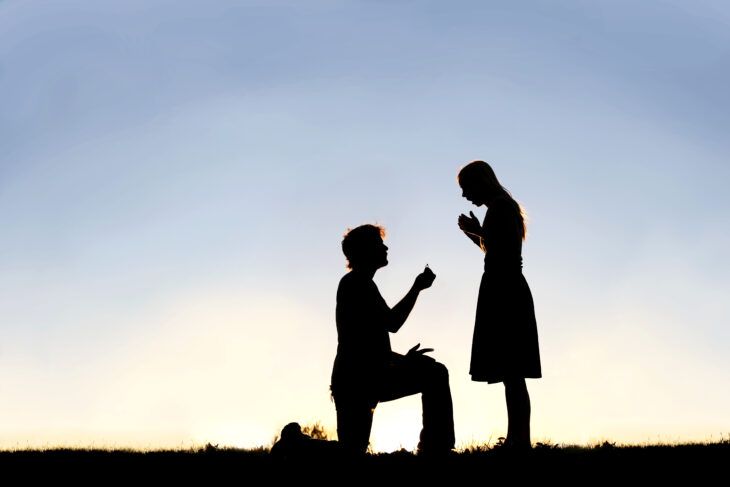 3. Her Wishes Are Your Command

Additionally, does she even want a diamond? Or are other types of jewels even better? Many couples have announced their engagement with rubies, sapphires, alexandrite, or moissanite. They may not be the commonly accepted engagement rings but if your bride likes rubies because she likes a more colorful ring, shouldn’t her being happy be what you’re ultimately after? 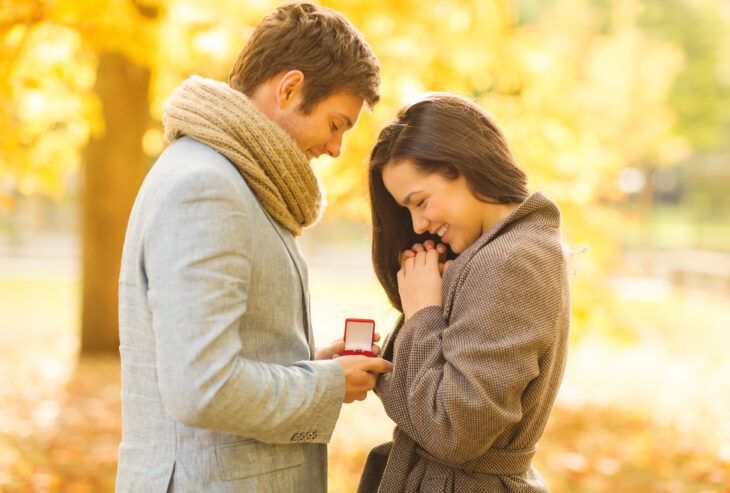 Of course, what you spend on your engagement ring depends on what’s important to you and what kind of ring you want. In my case, a friend of a friend ultimately hooked me up on diamonds bought at wholesale prices. I also had the opportunity to check prices internationally because my parents were in Hong Kong at the time.

Giving discounts off the standard price list was common practice there. After all, the better diamonds are all internationally certified based on their cut, color and carat (size) so you can easily compare prices from piece-to-piece. 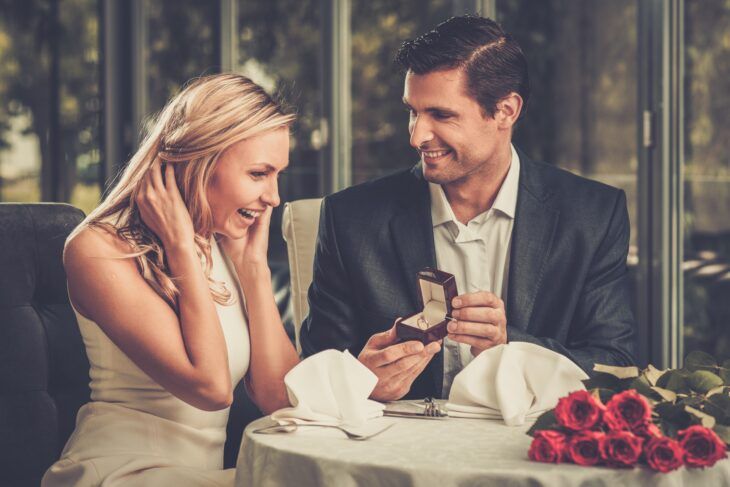 1. Getting a Significant Discount Off Retail with a Little Work

I did have to then find a place to make the ring that the diamond is set on. That was easy, though, since many jewelry shops can do that. The end result was getting a ring that’s significantly less expensive than getting it at retail since I didn’t have to pay the markup on the diamond itself.

And speaking of retail markup, my research indicated that diamond engagement rings often come with a markup of anywhere between 600 and 800 percent. Yikes! Doing a little extra research and legwork yourself could save you a bundle. You’ll also learn a great deal about diamonds in the process. You can even seriously impress your bride if you’d like. 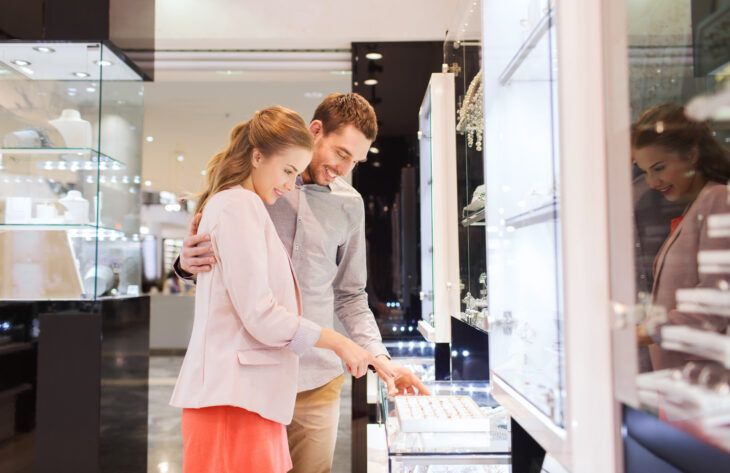 Ultimately, you need to decide what’s important to you and your partner, and go from there. I don’t know much about or care about flashy jewelry. My wife wanted something decent but didn’t need bling that’s the best-of-the-best. That’s why it made sense to buy a good quality ring, but not something so over-the-top that even my distant relatives overseas will end up calling me about it.

For some, an expensive engagement is a must. It’s an important part of the whole experience. For others, it’s just some formality, that doesn’t make much sense at all. Before you spend any money on the ring, consider whether or not it’s really that important to you. If it’s not, then following some made up rule of thumb is just like throwing money down the toilet. If it is though, then seriously weigh the pros and cons of spending big money. Having that amount in your savings might be the better choice. 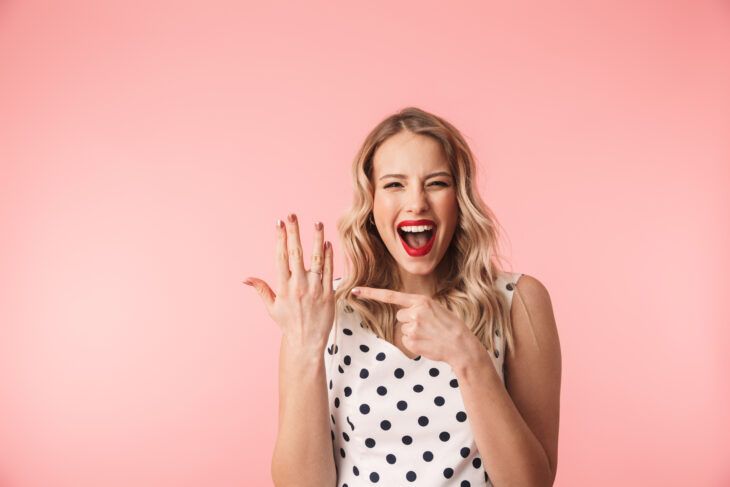