The Unexpected Red Carpet Dresses Of Year’s Past 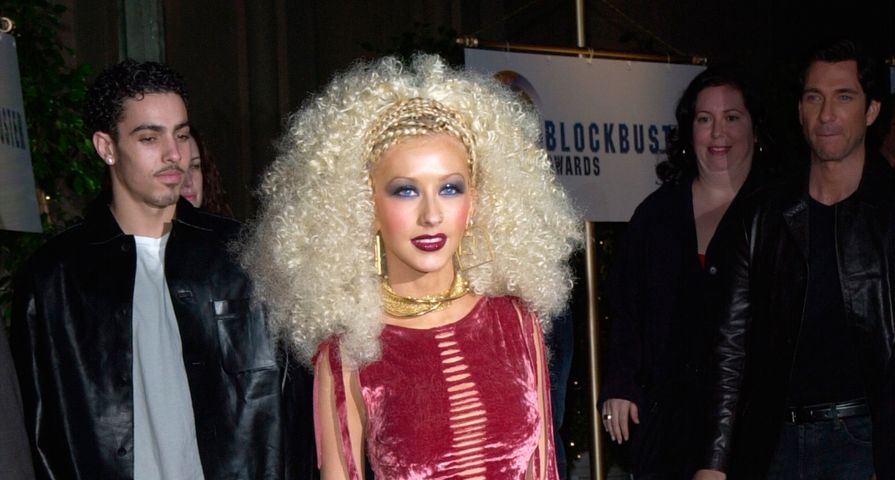 A Hollywood awards ceremony is one of the most highly publicized events of the year with thousands of people attending and millions watching on television. The stakes are high when it comes to taking a fashion risk at an event like this and the years have proven that it’s not possible to go without a little fashion commentary to follow afterward! Whether it be ultra revealing, questionable or downright outrageous, a few red carpet dresses have definitely left their marks and will remain buzz-worthy fashion moments that no one will forget. Follow along for 15 unexpected red carpet dresses of year’s past:

Amber Rose made a huge bang when she stepped out at the 2014 VMA’s wearing a barely-there dress on the arm of boyfriend Wiz Khalifa! Rose rocked a scandalous dress with minimal fabric and instead opted for layers of sparse chains that just barely covered her figure. She rocked her signature shaved head and accessorized the glittering dress with silver ankle-strap heels and understated jewelry. 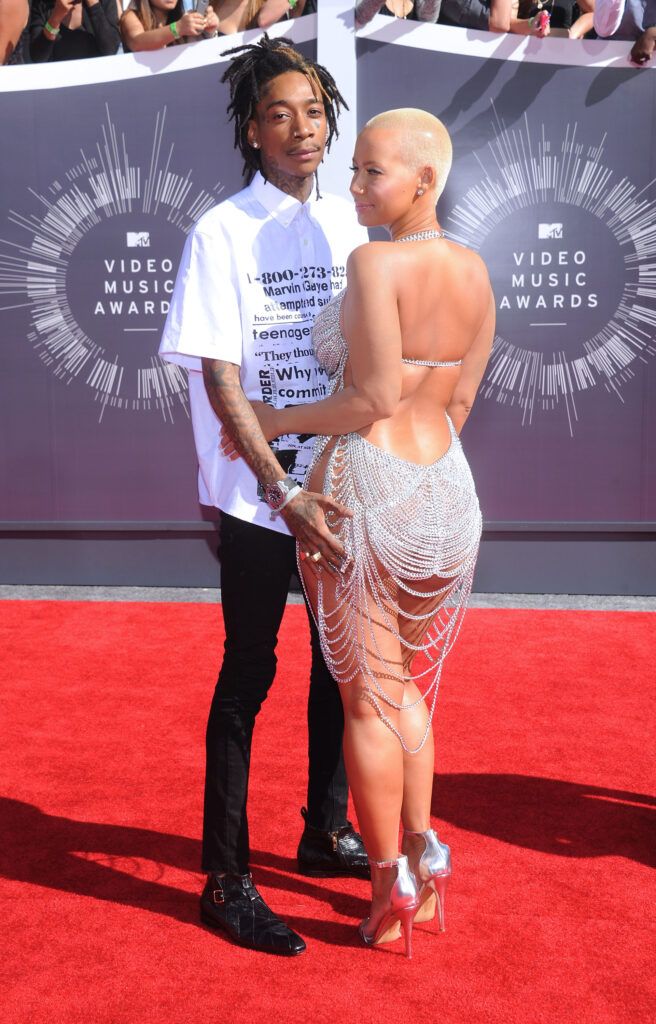 Lady Gaga is known for her outrageous and over the top fashion creations, but this particular MTV Video Awards look from 2014 caused more questions than most. The star went through three outfit changes throughout the evening and this raw meat creation was her final look. The designer behind the dress was Franc Fernandez who confirmed the dress was made of real meat from his family butcher. The dress offended quite a few viewers and the People for the Ethical Treatment of Animals even released a statement voicing their concerns about the look. 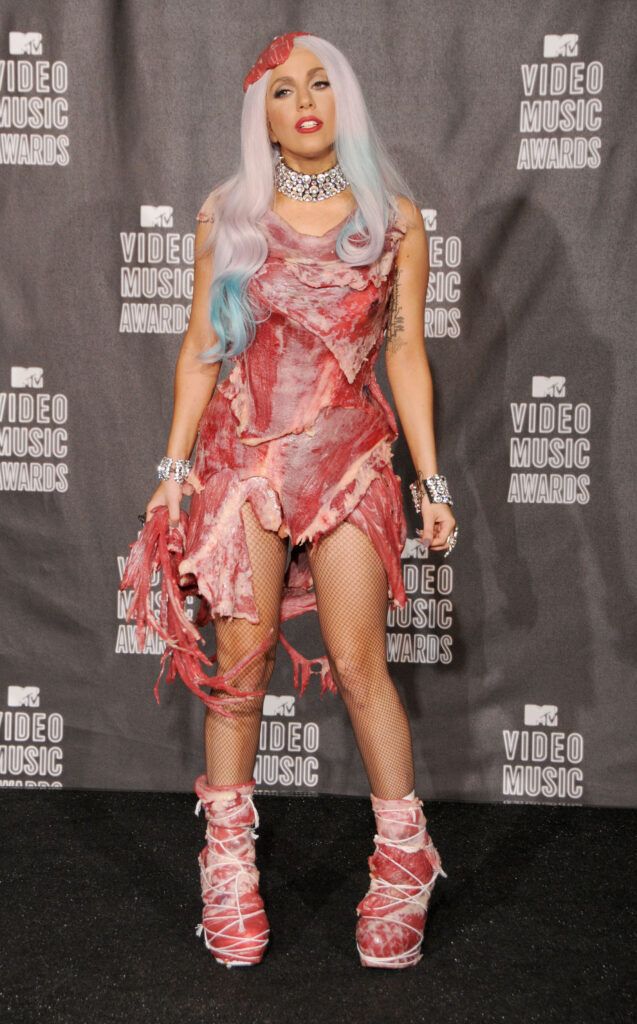 Although Kendall Jenner has rocked much riskier looks since 2014, this particular leggy gown garnered quite a bit of attention at the Much Music Video awards. Prior to this appearance Kendall was often thought of as the Kardashian’s innocent little sister, but this look definitely proved she had grown up. Jenner bared it all with this double slit dress and even flaunted the fact that she was going commando which shocked viewers! 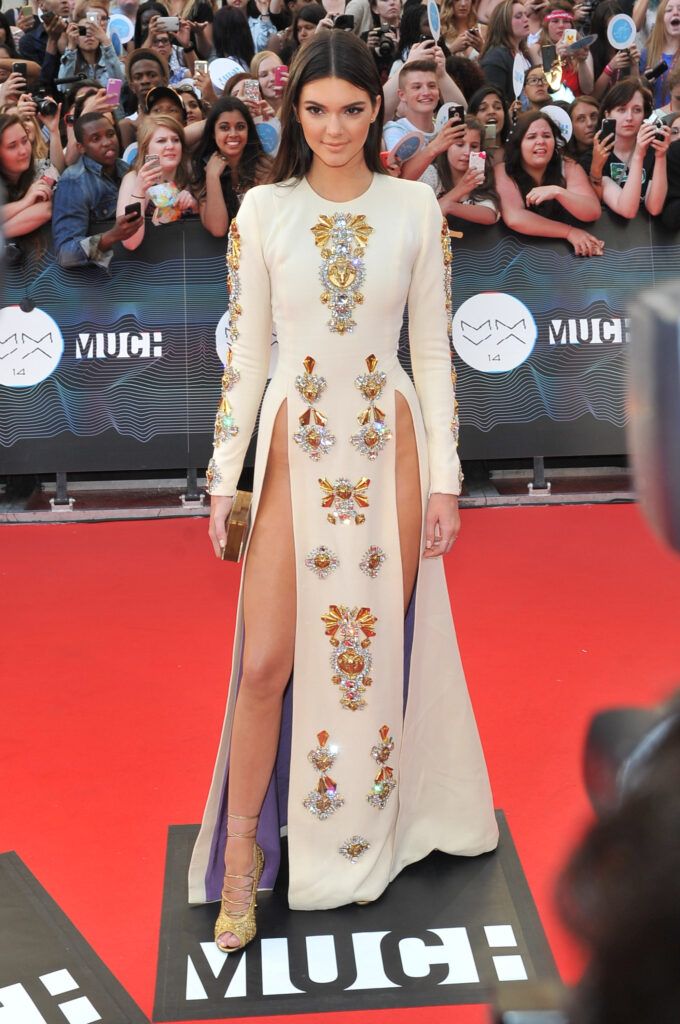 Blonde beauty Uma Thurman took a huge fashion risk when she wore this flouncy theatrical dress at the 2004 Oscars. The gown received high criticism and one critic even likened it to “something that a townsperson from Disney’s Beauty and the Beast would wear” while another compared it to a Swiss maiden. The layers drowned her slender shape and the gold and blue detailing was tacky and distasteful. 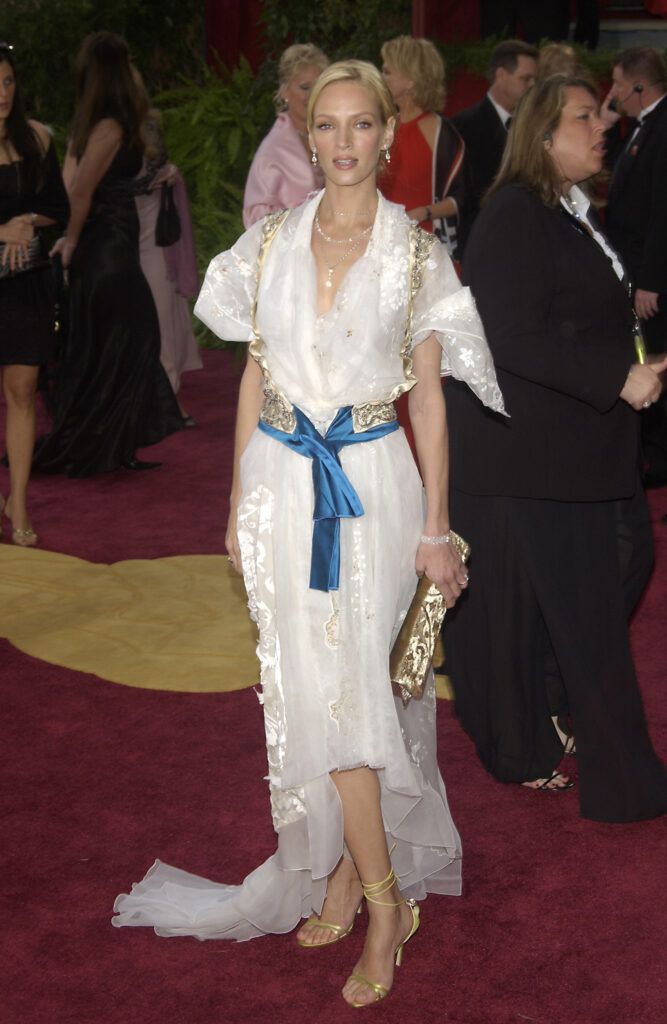 Icelandic singer Bjork has been ridiculed for years for the moment she stepped out at the 2001 Academy Awards wearing a swan-inspired dress complete with extravagant feathers, a voluminous bodice and stuffed swan head. Surprisingly in 2015 the infamous dress received recognition at the Museum of Modern Art for being one of the most buzzed about dresses that was still talked about even 15 years later. 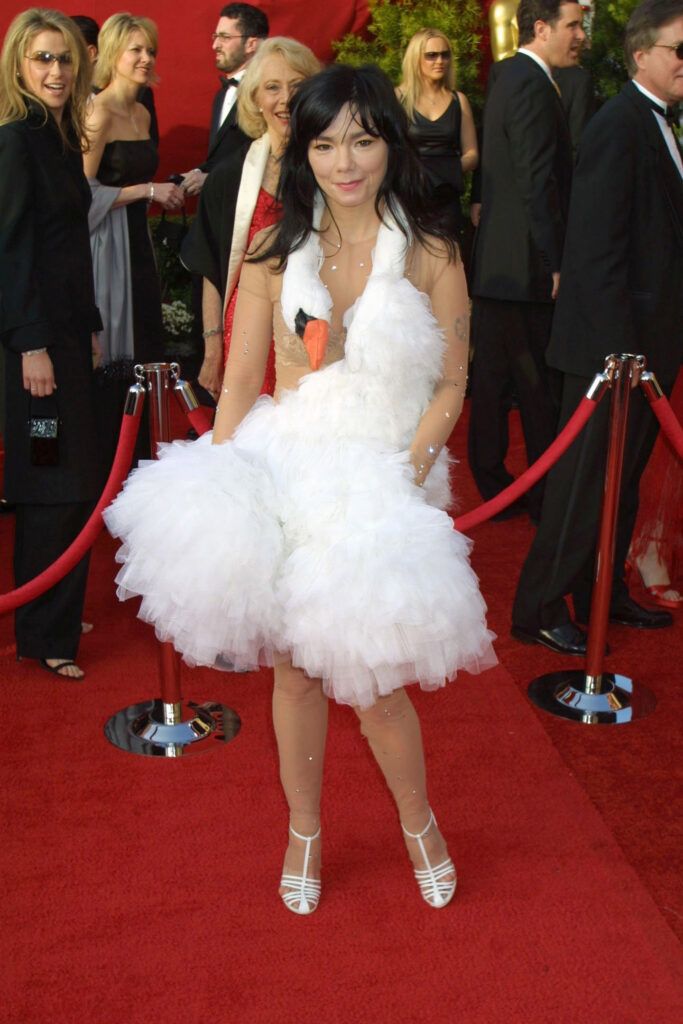 Elizabeth Hurly became an overnight star after she appeared on the arm of then-boyfriend Hugh Grant wearing a revealing Versace gown that was held together by gold safety pins. The provocative dress left little to the imagination and the star has even admitted that she believes the dress shaped the course of her career. She has suggested that if she had dressed more demurely for the event perhaps she could have landed more serious roles throughout her career. 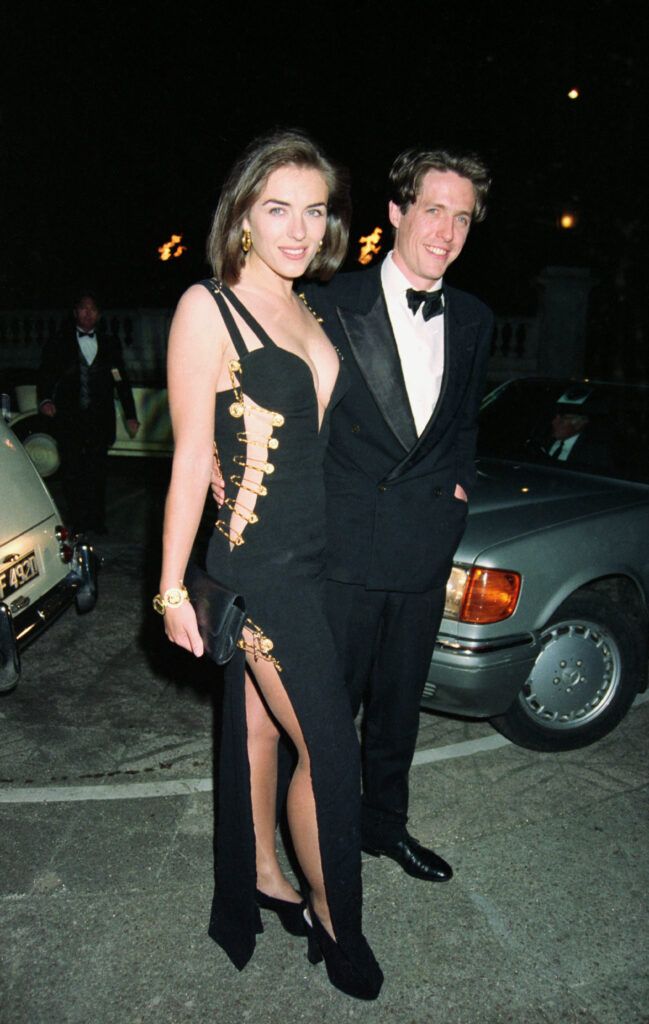 Madonna’s attention-grabbing Givenchy look that she rocked at the 2015 Grammy awards definitely caused quite a bit of stir. The front of the dress featured a bullfighter-inspired bodysuit, fishnet stocks and thigh-high boots, but the true shock factor came from the back of the dress that showed her entire backside! Even at 56 years old, this Hollywood icon proved she is not at all shy to show a little (or a lot) of skin. 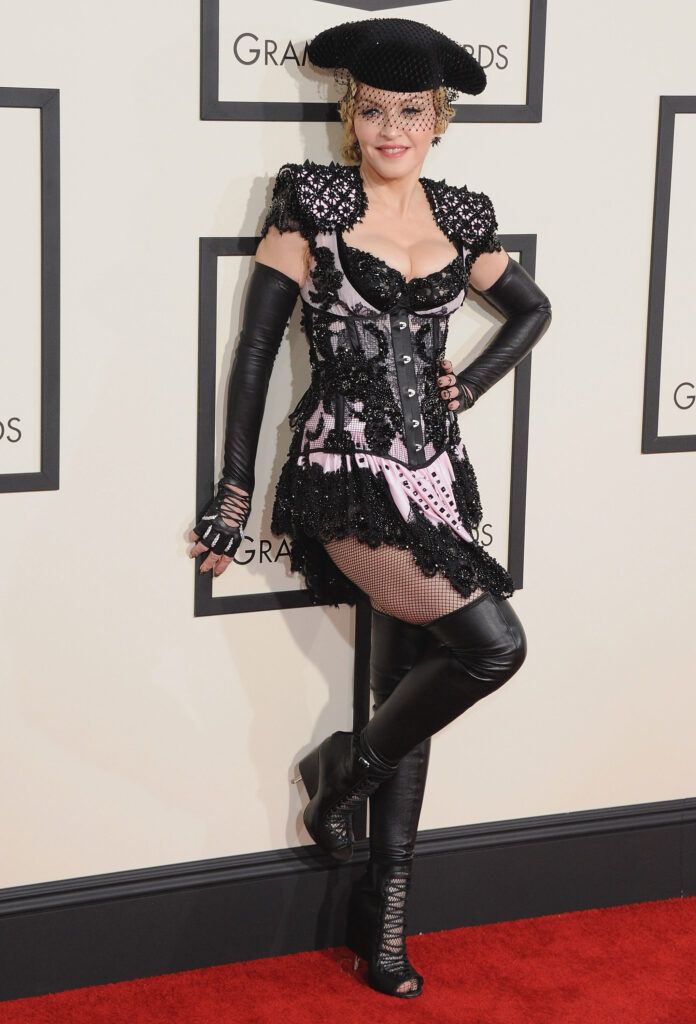 Christina Aguilera’s interesting velvet ensemble definitely caused quite a bit of buzz back at the 2001 Blockbuster awards. The dress featured shredded maroon fabric that was slashed down the entire center of her torso and fell in loose wisps around her legs. Although the dress itself caused a lot of commotion, the extravagant voluminous wig she donned also was the target of quite a bit of criticism and confusion. 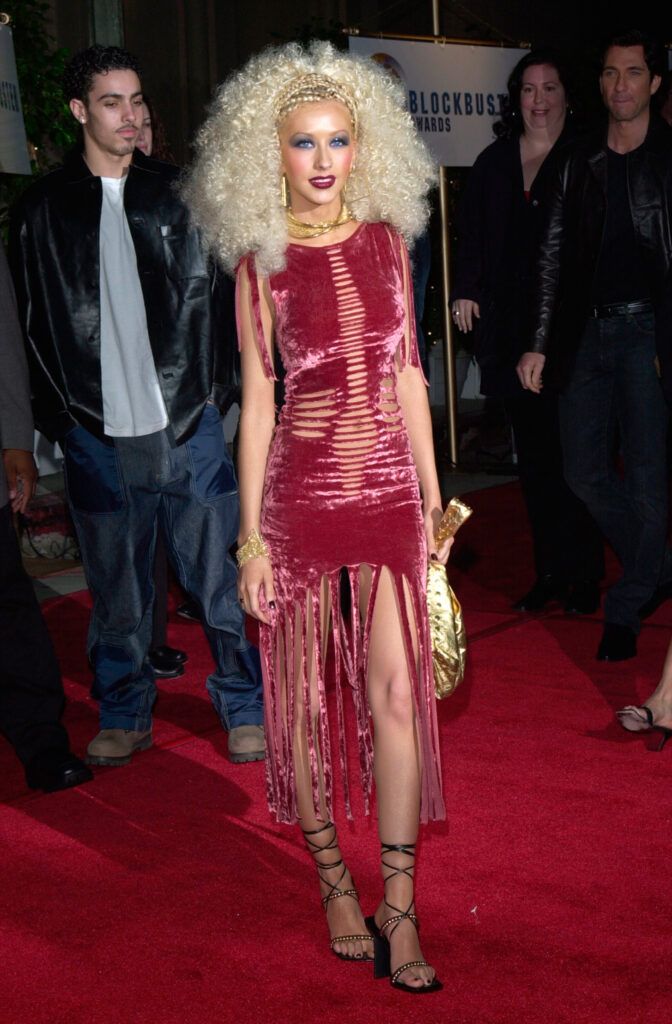 No one can forget the interesting suit combo that Celine Dion wore at the 1999 Academy Awards. Dion caused a buzz by rocking the suit backward and accenting the look with a Dior by Stephen Jones tophat and Raybans studded with diamonds by Martin Katz. The reversed suit was definitely original and a fashion statement that garnered both negative and positive reviews.

In 1986, Cher most definitely stole the show with this unforgettable Bob Mackie ensemble. The look exposed Cher’s bellybutton, which was largely seen as inappropriate at the time, and featured a two-foot tall spiky headpiece made of rooster feathers. Although Cher’s outfit seems slightly outrageous, the star has previously spoken out claiming that the outfit was in response to being told she was not nominated for her 1985 film Mask because she didn’t “dress seriously.” Anne Hathaway stepped out wearing a last-minute Prada gown at the 2013 Oscars and snubbed her friend and longtime fashion partner Valentino Garavani in the process. Hathaway was originally set to wear a Valentino and the fashion house sent out a press release prior to the show that revealed they would be dressing Anne Hathaway, Sally Field and Jennifer Aniston. Supposedly her Les Miserables costar Amanda Seyfried’s Alexander McQueen lace gown was too similar to Hathaway’s Valentino and caused Hathaway to panic and make the impulse decision to switch gowns at the last minute, betraying Valentino. 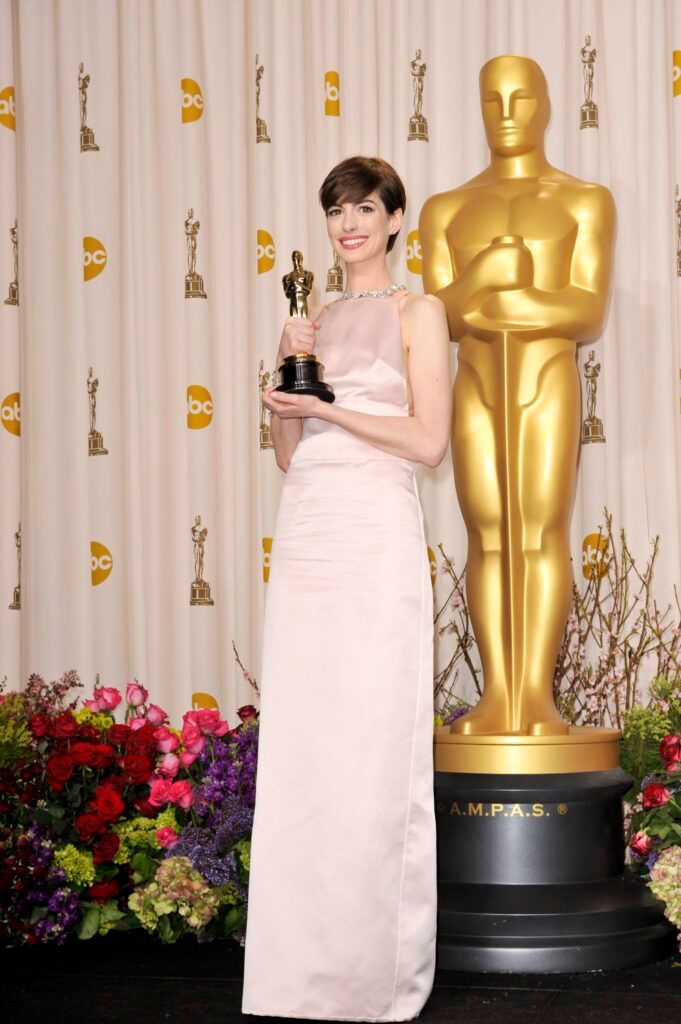 Singer Nicki Minaj is definitely not one to be shy of taking a fashion risk or two on the red carpet. Although a few of her looks have been eye-catching and unique, this one particular look from the 2012 Grammys definitely turned heads for all the wrong reasons. She wore a crimson Versace nun-like cloak and was accompanied by the Pope as she stepped onto the red carpet which many religious viewers deemed highly offensive and inappropriate. J.Lo’s most infamous ensemble of all time is undoubtedly the sheer green Versace number that she wore to the Grammys in 2000. The gown featured a plunging neckline that reached below her bellybutton and revealed a large amount of cleavage. The dress is said to have made both Donatella Versace and J.Lo household names following the event and will forever be one of the most revealing looks to hit the Hollywood red carpet. 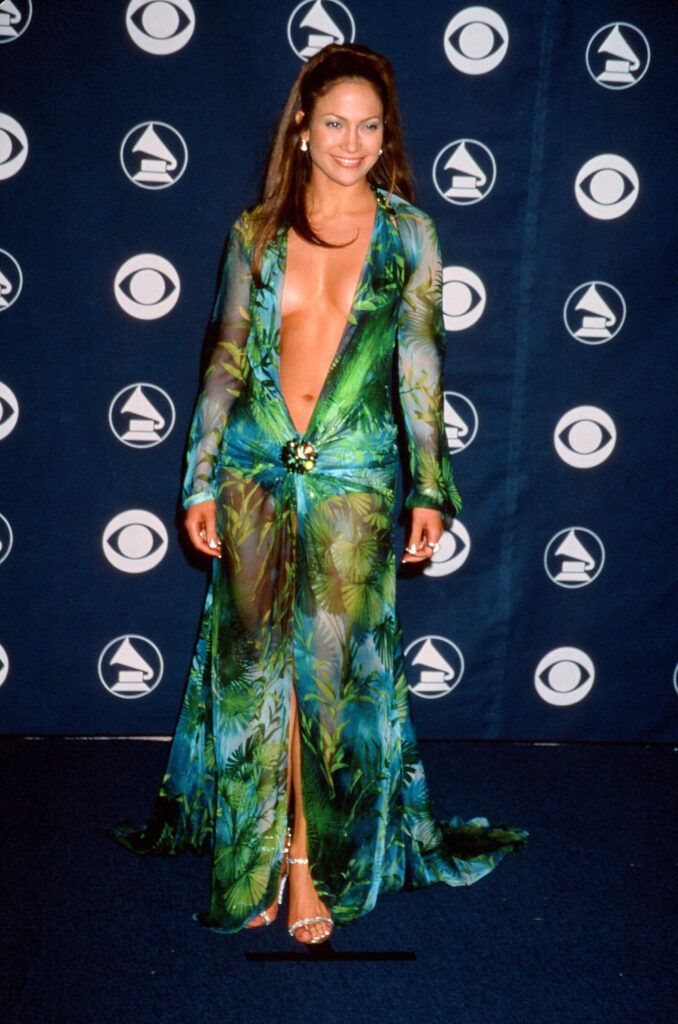 In 2014, Rihanna got her fair share of flack for wearing a completely sheer ensemble to the CFDA awards. The dress featured more than 230,000 Swarovski crystals that were hand sewn to the gown and the sheer material allowed the star to bare it all as she stepped out on the red carpet. She accessorized the nearly-naked Adam Selman creation with a fur scarf and a matching headscarf and gloves. At the event the star won the “Fashion Icon” award and commented that for her fashion was always about taking risks. “The point is to be audacious – even jaw-dropping or button-pushing,” she commented. 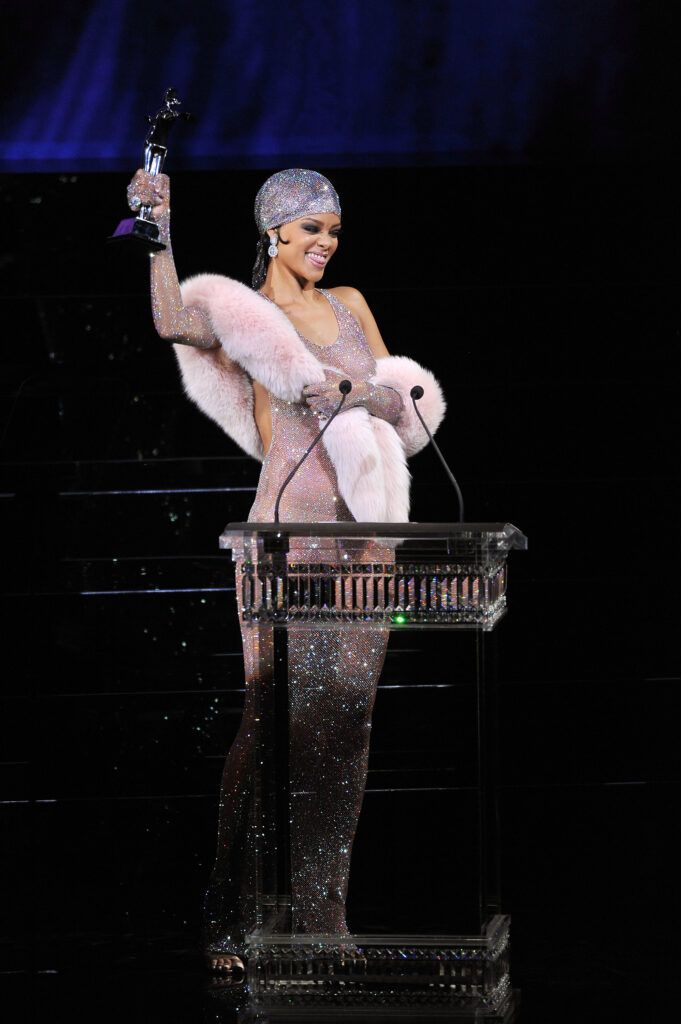