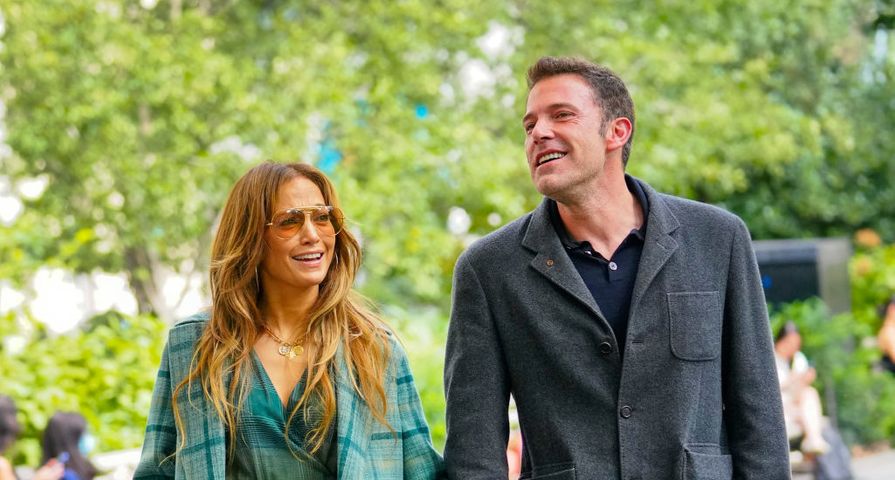 Jennifer Lopez and Ben Affleck have a long history together. The pair first connected in 2002 on the set of the Gigli and became officially engaged in November of that same year. Just days before the couple was set to marry, they called off the wedding in September 2003, before eventually calling it quits on their relationship in January 2004. Nearly twenty years later, fans were shocked when news leaked that Affleck and Lopez had rekindled their romance in 2021. Affleck proposed once again in April 2021, and the two officially walked down the aisle in Las Vegas in July 2022. In honor of their rekindled romance, follow along for some rare photos of the pair throughout the years.

In late July 2022, Jennifer Lopez and Ben Affleck were spotted strolling near the Louvre Museum in Paris, France. The trip was coined as their honeymoon Paris trip since it quickly followed their Las Vegas wedding ceremony. For the romantic occasion, Lopez opted for a maxi-style red dress with cutouts, while Affleck wore a blue button up top, navy trousers and brown shoes. The couple look happy and relaxed in this shot as they stroll leisurely arm-in-arm in one of the world’s most romantic cities. 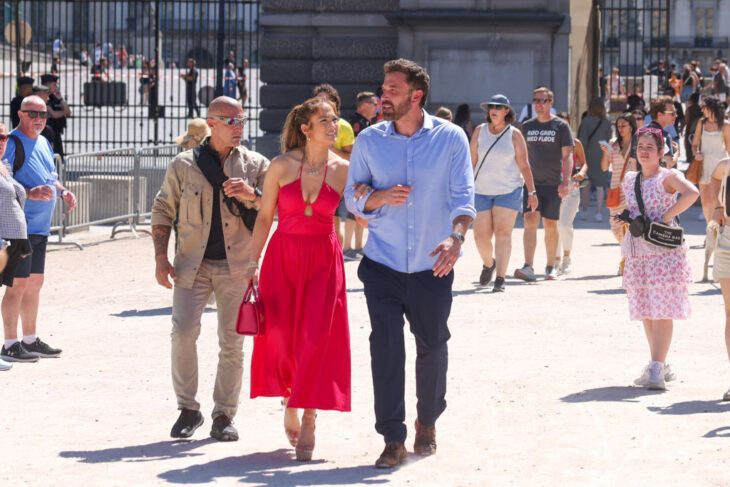 In May 2003, Ben Affleck and Jennifer Lopez were spotted together attending a Los Angeles Lakers vs. San Antonio Spurs playoff game at the Staples Center. The couple was known for frequently attending sports events together in the early stages of their relationship. For this outing in the early 2000s, Lopez rocked white low rise jeans paired with a button up top tied in a knot at her waist. Affleck opted for a green t-shirt paired with a black overcoat. 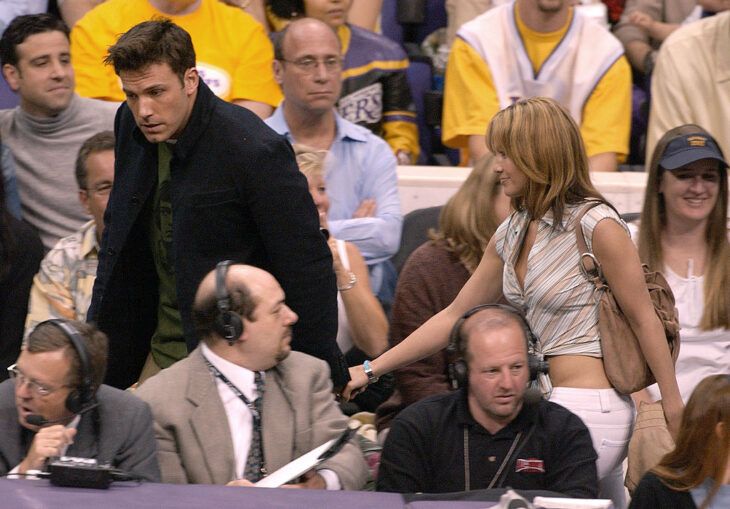 In February 2022, Ben Affleck and Jennifer Lopez stepped out for a special screening of “Marry Me” at the Directors Guild of America (DGA) in Los Angeles. For the occasion, Lopez dressed up in a seemingly bridal-inspired lace number with a balloon-style skirt and long sleeves, while Affleck opted for a navy tux and a long overcoat. In this adorable photo, Affleck is leaning in lovingly to Lopez with his arm wrapped around her.

In January 2003, Ben Affleck and Jennifer Lopez bundled up while attending the Sundance Film Festival in Park City, Utah. For the occasion, Lopez wore a white cable knit ensemble complete with a matching pom pom hat, while Affleck opted for a navy parka and dark sunglasses. This event occurred during the peak of Jennifer and Ben’s whirlwind romance and at this point, they were officially solidified as a Hollywood it-couple that many coined “Bennifer” at the time. 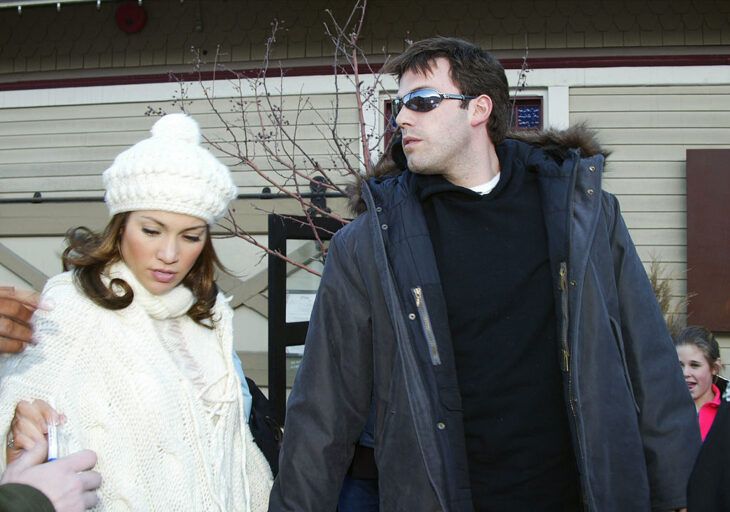 In April 2022, Jennifer Lopez and Ben Affleck were spotted holding hands out and about in Los Angeles. For this occasion, Affleck rocked a casual flannel shirt while Lopez opted for a flowy black dress and aviator sunglasses. The moment came shortly after Lopez revealed in her “On the JLo” newsletter that Affleck proposed unexpectedly on April 2nd while she was in the bathtub. Around this time, Affleck and Lopez were seen spending time together in Los Angeles on several occasions, and often with their blended family. 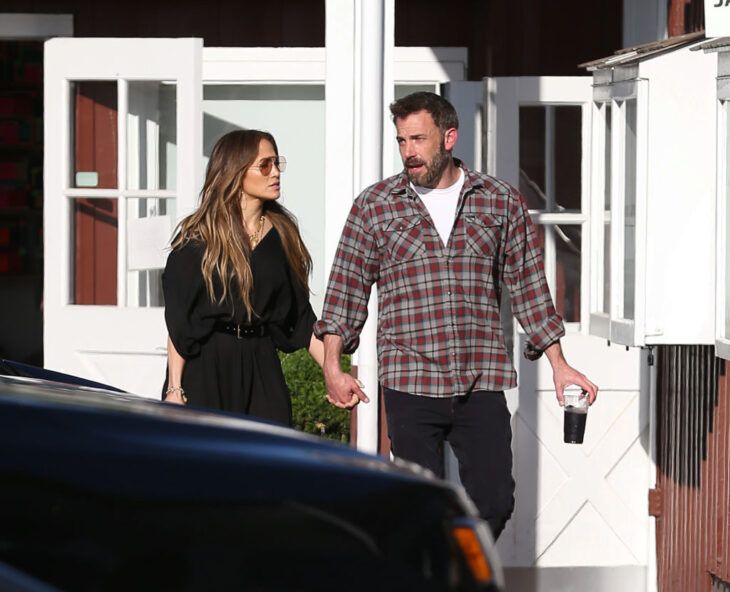 In February 2003, Ben Affleck and Jennifer Lopez walked the red carpet at the premiere of Daredevil at the Village Theatre. This red carpet event marked one of their most iconic nights as a couple in Hollywood. For the occasion, Lopez wore a strapless black dress with floral detailing on the chest, while Affleck kept it classic in a timeless suit. In this candid shot, the couple is seen hand-in-hand walking across the red carpet while Ben waves to the crowd and J.Lo smiles happily behind him. 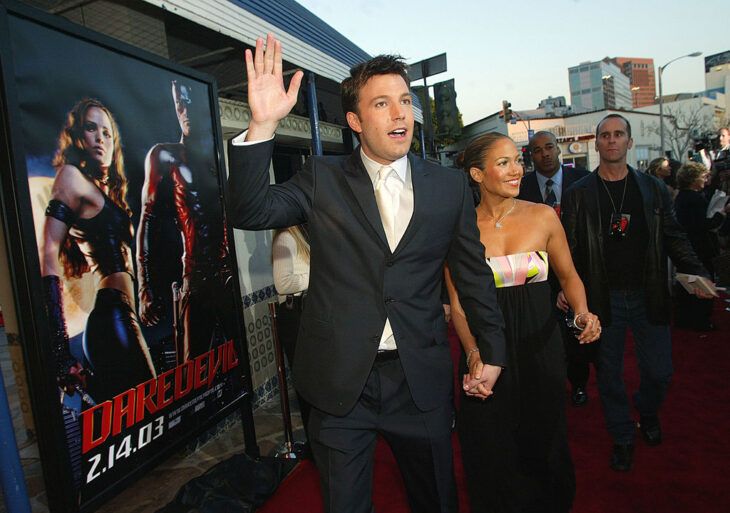 In July 2003, Ben Affleck and Jennifer Lopez walked the red carpet to attend the premiere of Revolution Studios’ and Columbia Pictures’ film, Gigli. The set of this film is actually where the couple met for the first time. While the film was a special moment in their relationship, it unfortunately fell flat in the box offices. In this particular photo, the couple is posing on the red carpet at the film’s premiere. For the glamorous event, J.Lo rocked a chocolate brown strappy dress and wore her hair in a voluminous bun. Affleck opted for a classic suit with a baby blue shirt and tie underneath. 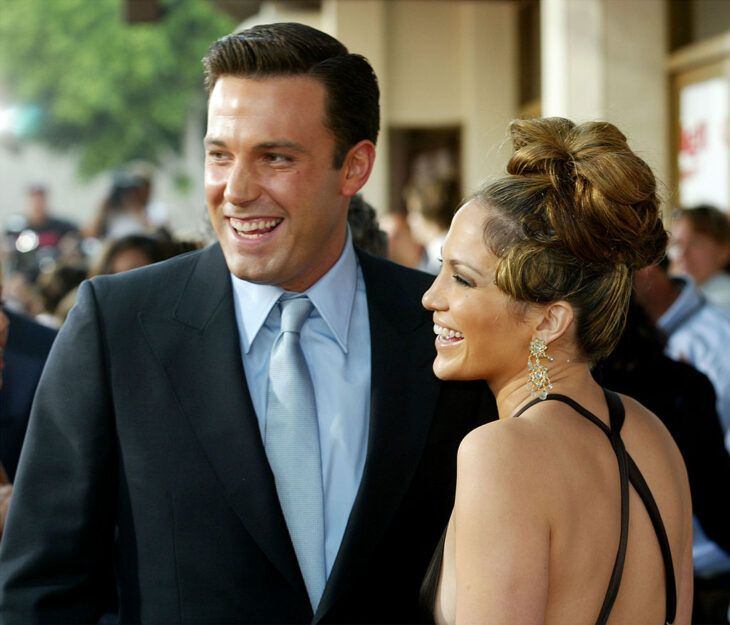 In November 2002, Ben Affleck and Jennifer Lopez were photographed in a cozy horse carriage ride while filming Jersey Girl in New York City. This film marked their second movie filmed together, but unfortunately, the film was another miss at the box offices. In the film, Affleck plays a successful music promoter who meets a book editor, played by Jennifer Lopez, at a company Christmas party. The two instantly hit if off and have a whirlwind romance that changes everything. 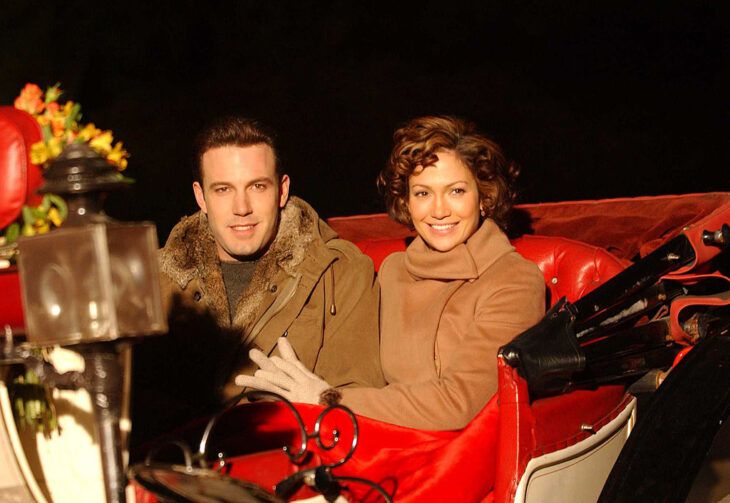 In July 2022, Jennifer Lopez and Ben Affleck were photographed near the Louvre Museum during the romantic trip that many coined their honeymoon. For the occasion, the couple held hands as they strolled leisurely near the iconic Paris landmark. Lopez opted for an embroidered navy sweater for the occasion, while Affleck wore a grey t-shirt and casual blue pants. For this particular occasion, the couple brought along their children to join them and enjoy the sights and shopping in the city. 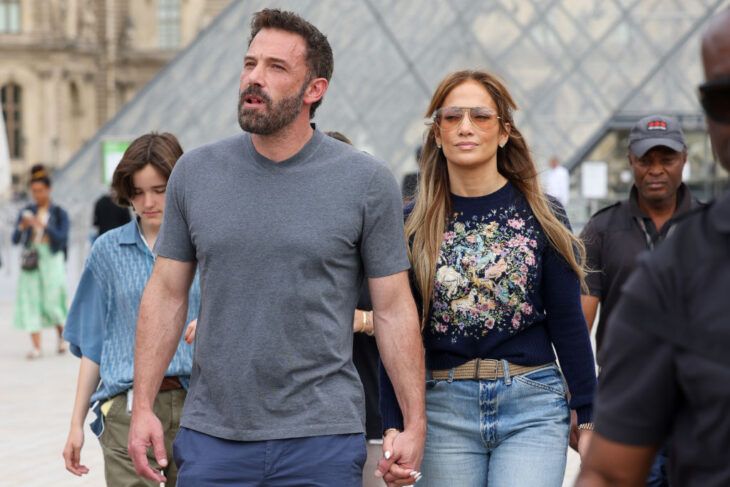 In September 2021, Ben Affleck and Jennifer Lopez were photographed leaving from Casino peer after a press conference for The Last Duel during the 78th Venice International Film Festival. For the occasion, J.Lo wore a pinstripe dress with her hair pulled back in a tight ponytail. Affleck looked dapper beside her in a navy suit, white shirt and aviator-style sunglasses. In this photo, the couple is seen leaving the festival and boarding a boat to head back to their hotel. 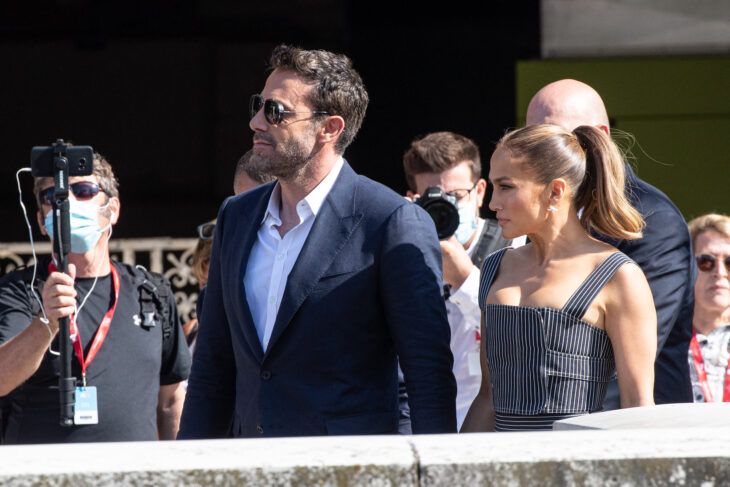 During that same week, Ben Affleck and Jennifer Lopez were photographed on an official red carpet at the Venice International Film Festival in September 2021. The couple attended the premiere of The Last Duel, which marked their first time in an official public appearance since rekindling their romance. For the special occasion, J.Lo opted for a white dress with silver beading, while Affleck wore a classic tux with a black bow tie. 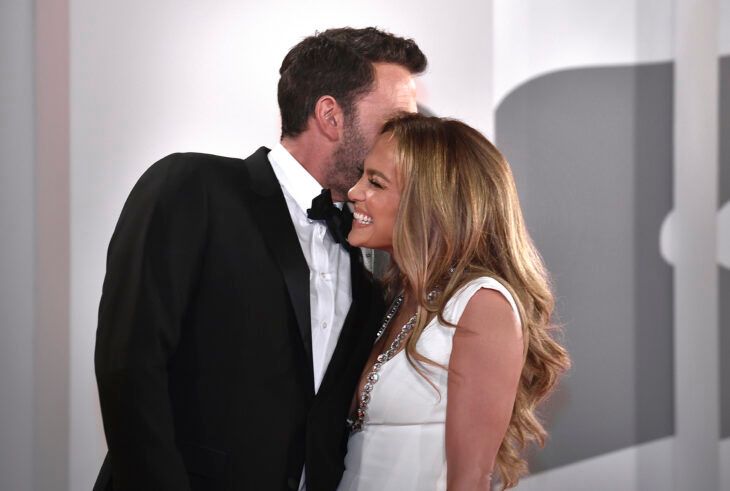 In September 2021, Ben Affleck and Jennifer Lopez were spotted on a leisurely stroll in Central Park in New York City. According to reports, Affleck flew into town to support Lopez ahead of her performance for Global Citizen’s Recovery Plan for the World. For the occasion, Lopez wore a bold turquoise look which consisted of a jumpsuit and long overcoat. Affleck kept it casual with a navy polo, jeans and a wool blazer. The couple definitely seemed to be enjoying each other’s company and didn’t hesitate to pack on the PDA for the cameras. 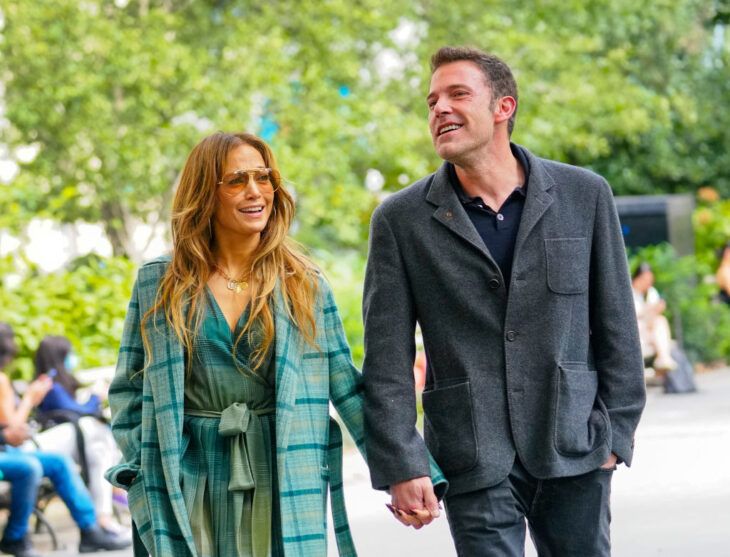