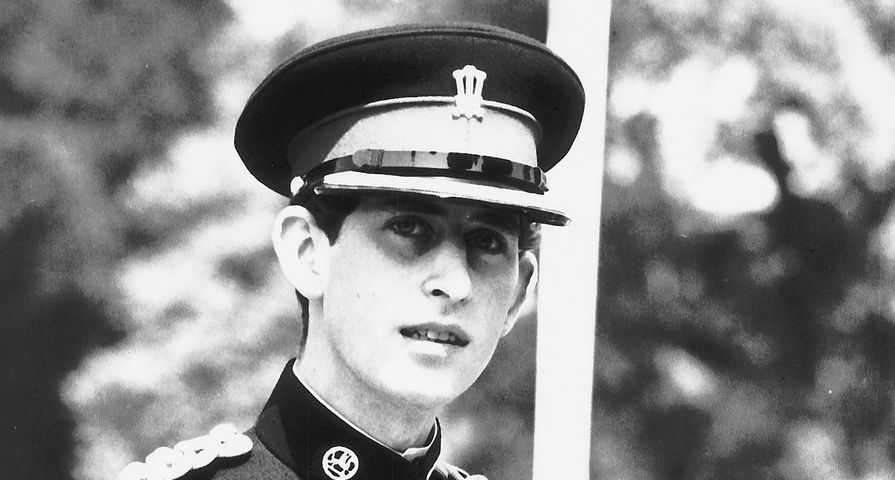 Prince Charles is one of those few people who has been famous for his entire life. Some of us actually remember watching him grow from a timid young boy into a handsome young man. In spite of this, it’s still easy to forget what he once looked like because he makes regular appearances as a working royal. We’ve collected photos of him that most people haven’t seen — check it out:

In July 1969, Queen Elizabeth crowned Prince Charles the Prince of Wales in a televised ceremony at Caernarfon Castle. He was the 21st Prince of Wales and is the longest serving. In 2017, he surpassed Edward VII. He almost looks like a king in this photo wearing an ermine cloak and crown while holding a scepter! 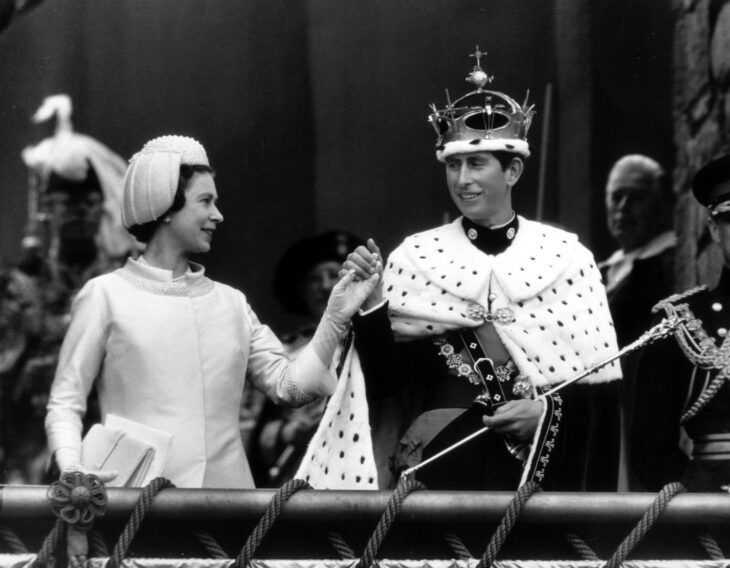 This picture is from 1976. The young prince was giving an interview where he discussed King George III, who was on the British throne from 1760 to 1820. Prince Charles is a big fan of George III. Although the King was criticized for supporting the very policies that resulted in the American War of Independence, Charles believes that he was misunderstood. 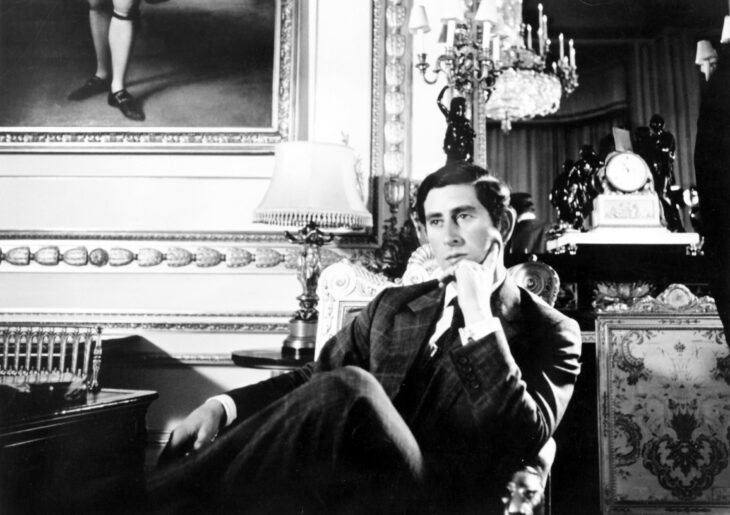 17. Taking Part in a Commando Course

It certainly looks like Prince Charles is ready for war! Here he is in 1975 taking part in a commando course in Lympstone, Devon. That same year, he went on to become colonel of the Welsh Guards. He’s had quite the military career — that’s for sure! 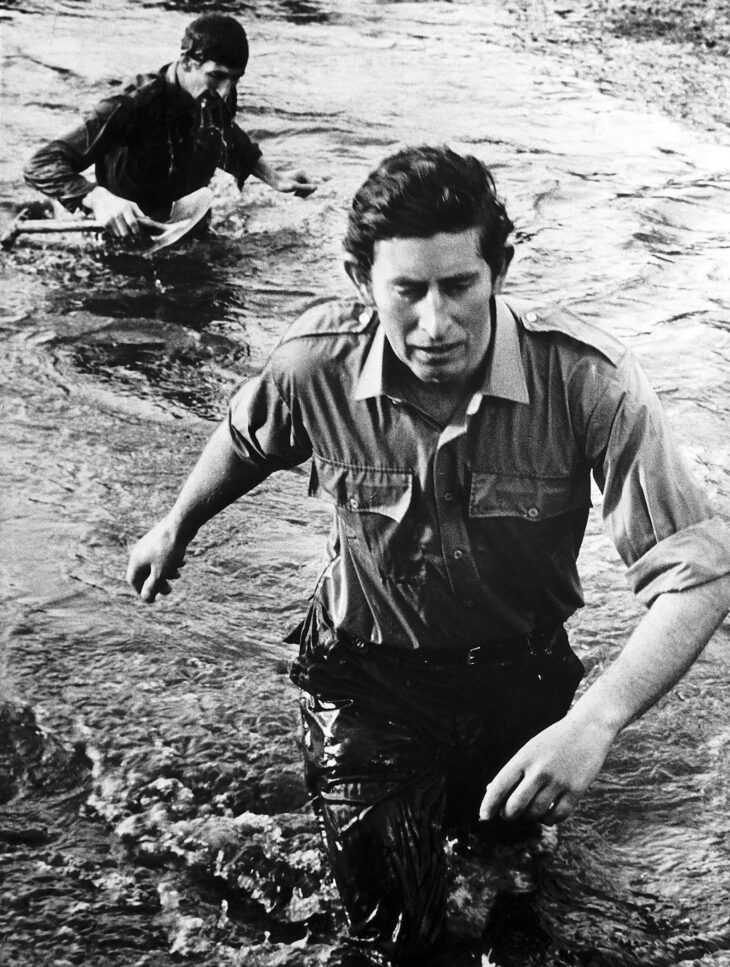 Prince Charles is a man of many talents! Here he is 1979 taking part in an archery contest during a visit to the Country Landowners Association Game Fair at Bowood House in Wiltshire, England. It certainly looks as though he knows what he’s doing! 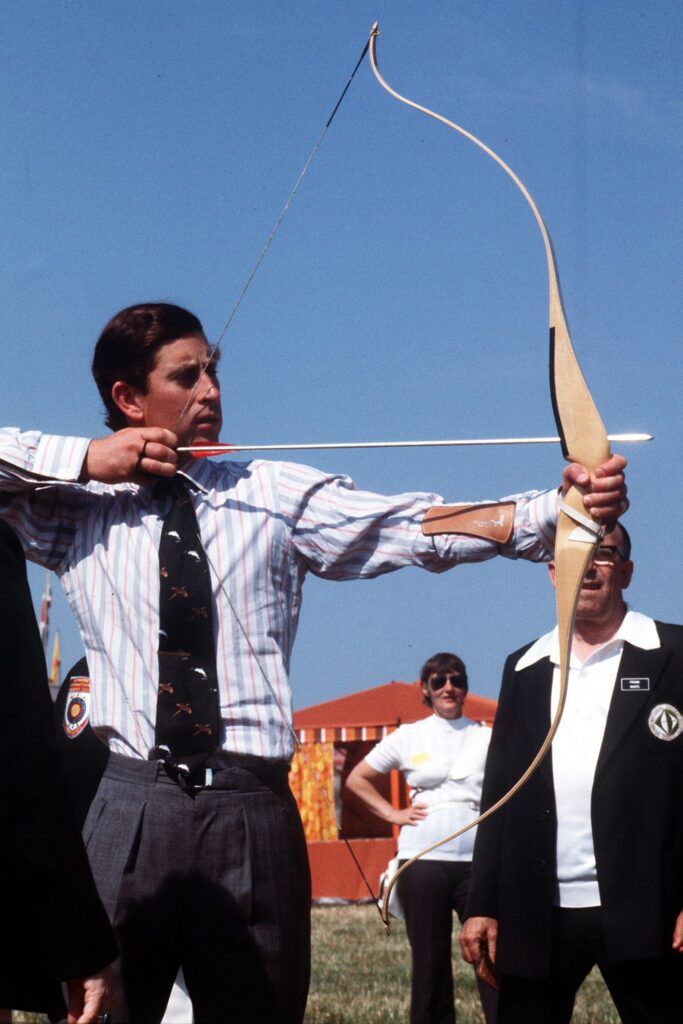 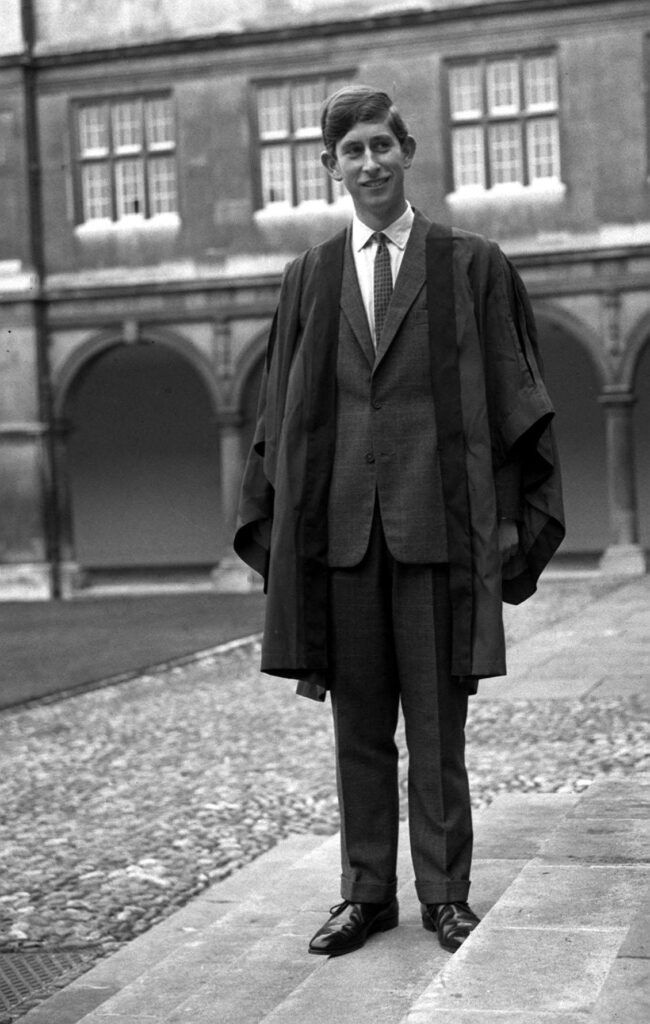 14. On the Royal Navy Frigate, Minvera

This picture is from 1973. Prince Charles was serving as a sub-lieutenant on the bridge of a Royal Navy Frigate, Minerva. After this, he set sail on routine patrols and exercises around the West Indies aboard the warship. 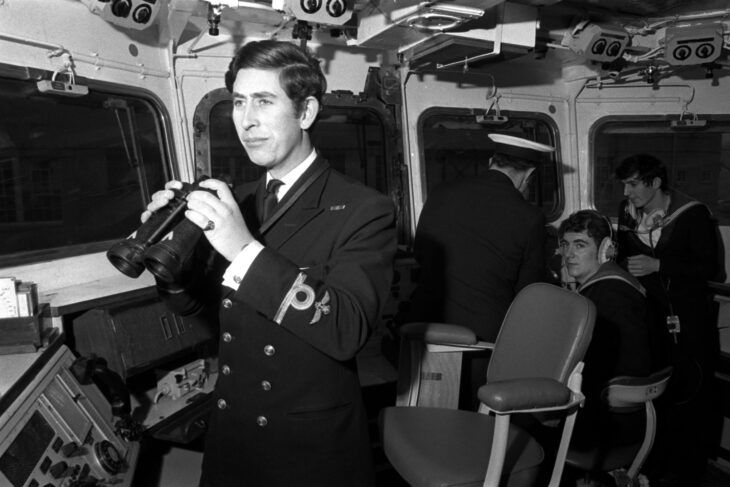 Here Prince Charles is in 1978 at Balmoral Castle wearing a kilt and posing with a Labrador. The royal family typically spend summers at the Scottish castle and its customary for members of the family to wear kilts while there. 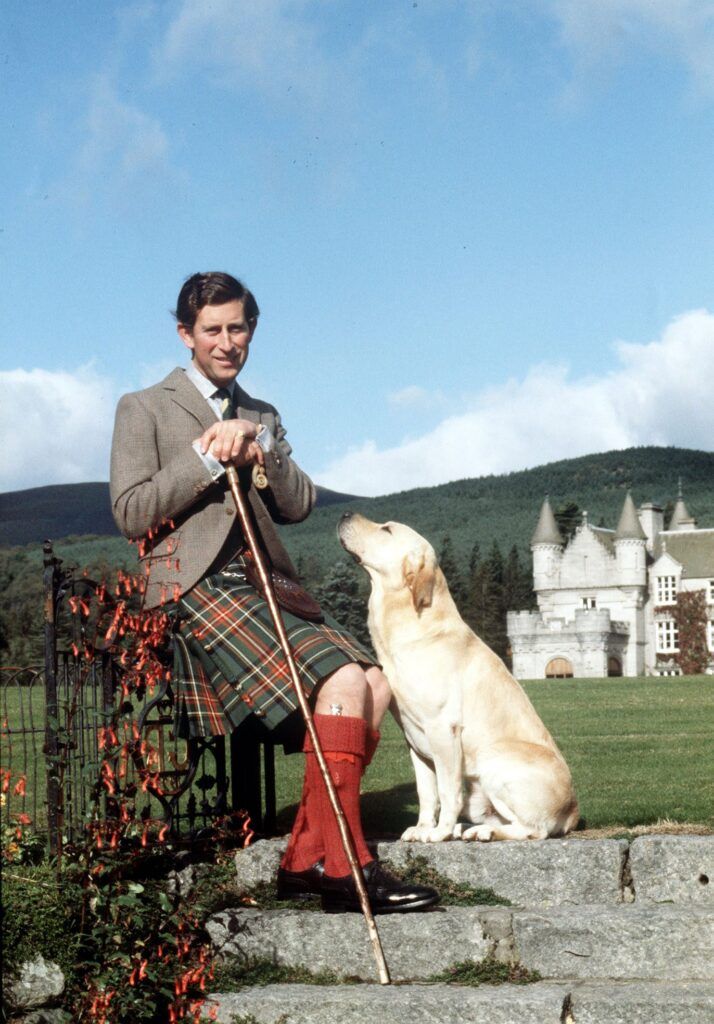 12. After Breaking His Arm

In 1990, Prince Charles broke his right arm playing polo. It was a pretty serious injury. His arm was broken in two places and required a three-hour surgery to repair the break. In this picture, the swelling in his hand and wrist are obvious. 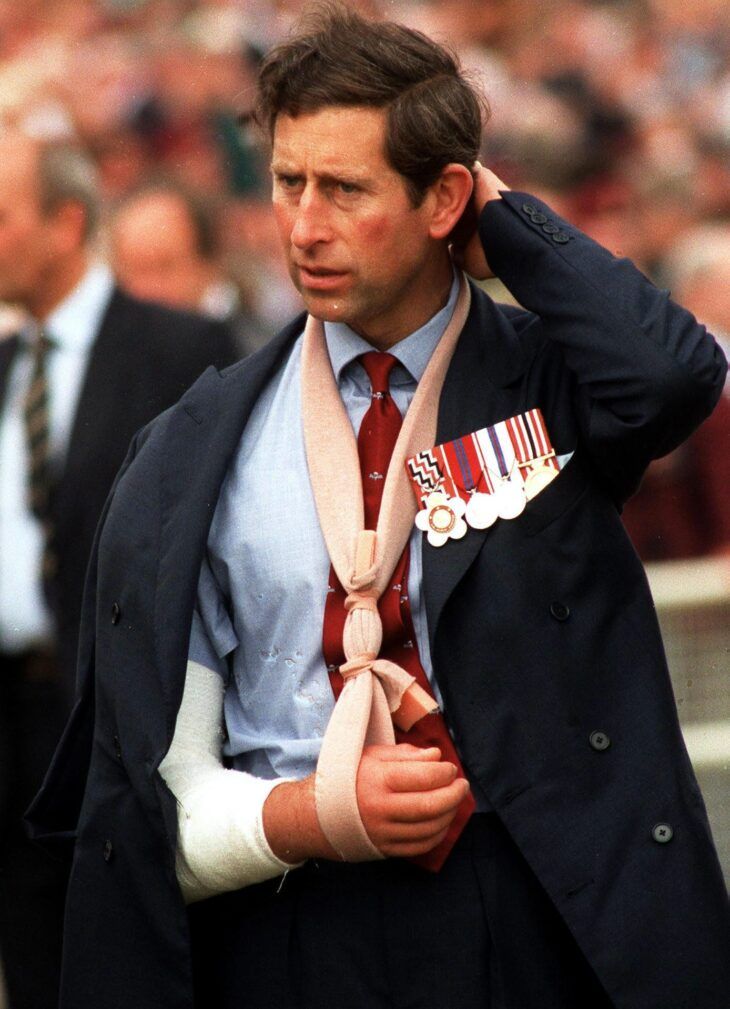 11. At Aberdeen Airport in Scotland

Here the Prince of Wales is with his eldest son Prince William at Aberdeen Airport in Scotland in 1984. It looks like a pretty sweet moment between father and son. He’s clearly explaining something to young William. 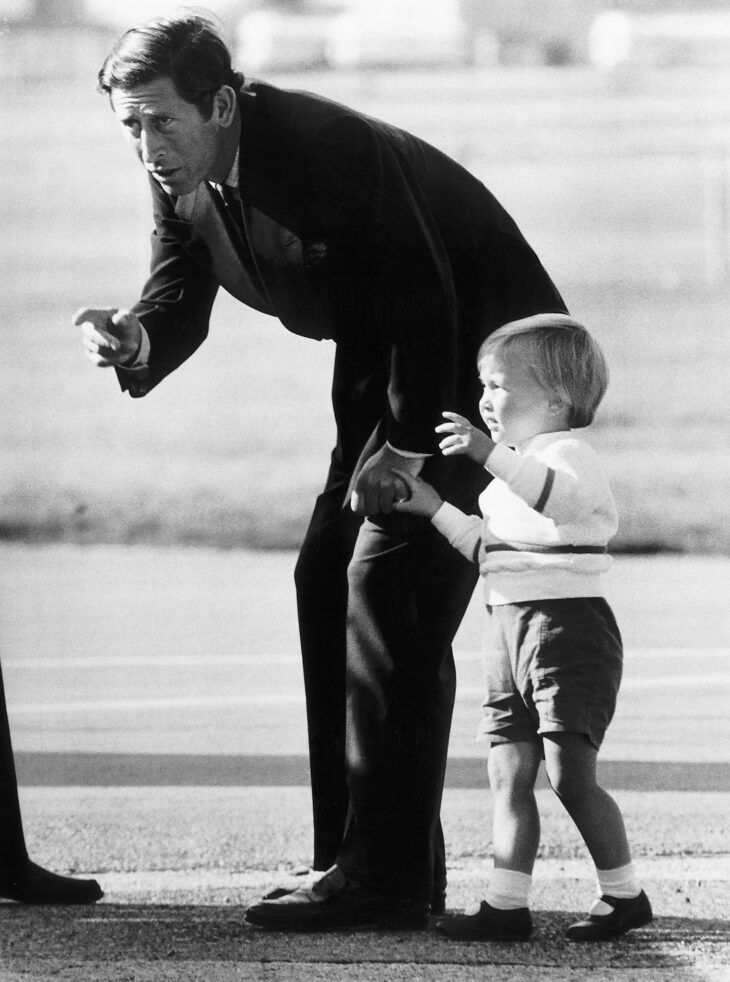 Back in 1980, before he was married to Princess Diana, Prince Charles visited India by himself. In this picture, he is with India’s Prime Minister at the time, Mrs. Indira Gandhi, at her home in New Delhi. 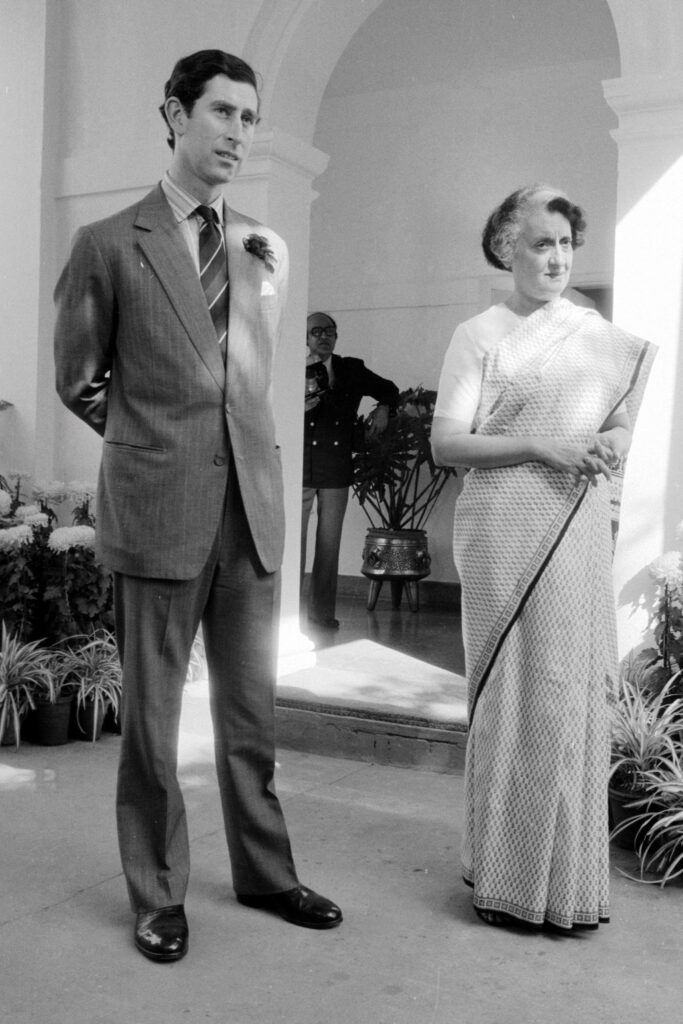 This picture is from 1977. Prince Charles was having an interview with Press Association Court Correspondent Grania Forbes about the Silver Jubilee Appeal, which he launched so that Britain could have an opportunity to show its gratitude for his mother’s dedicated service as reigning monarch. 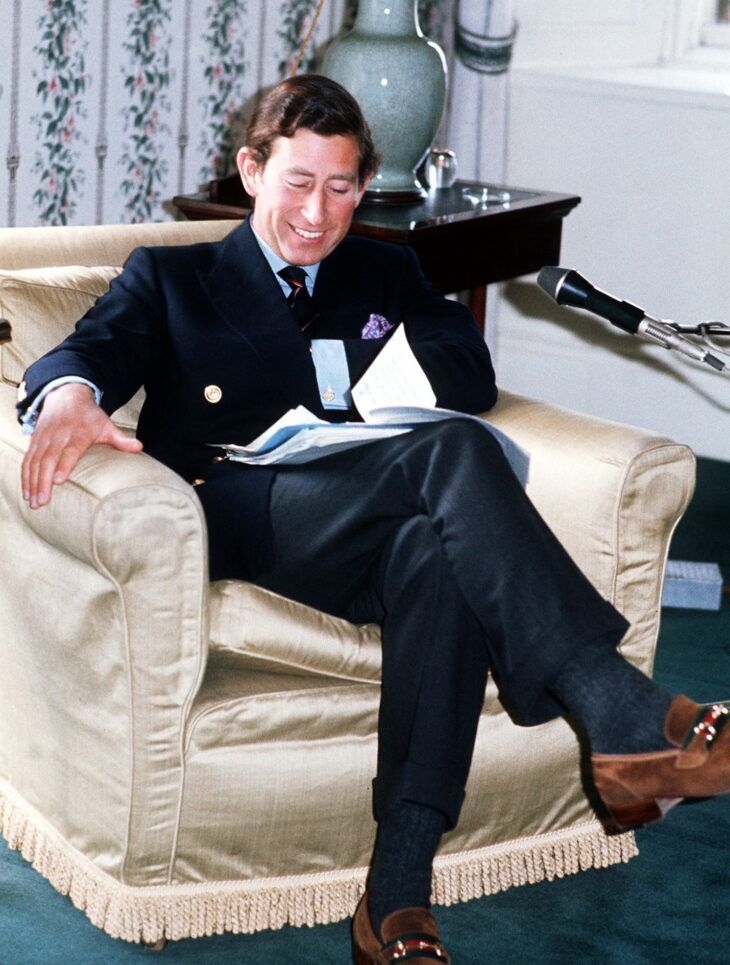 In this photo, the Prince of Wales is issuing orders aboard his ship, coastal minehunter HMS Bronington, in 1976. He had taken command of the ship in February of that year and maintained that position for the last ten months of his active service in the navy. 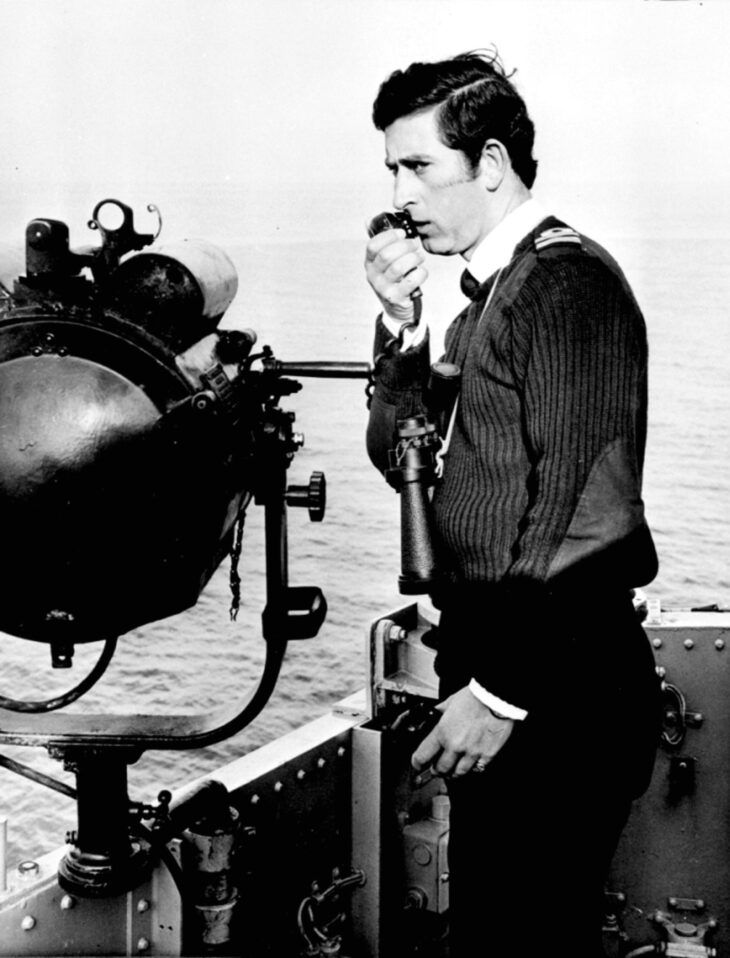 Before the handsome prince began dating Princess Diana, he briefly dated her older sister, Lady Sarah Spencer. Here they are in 1977 attending a polo match together. Prince Charles was representing Young England in the Wills International Polo Match at Windsor Great Park. 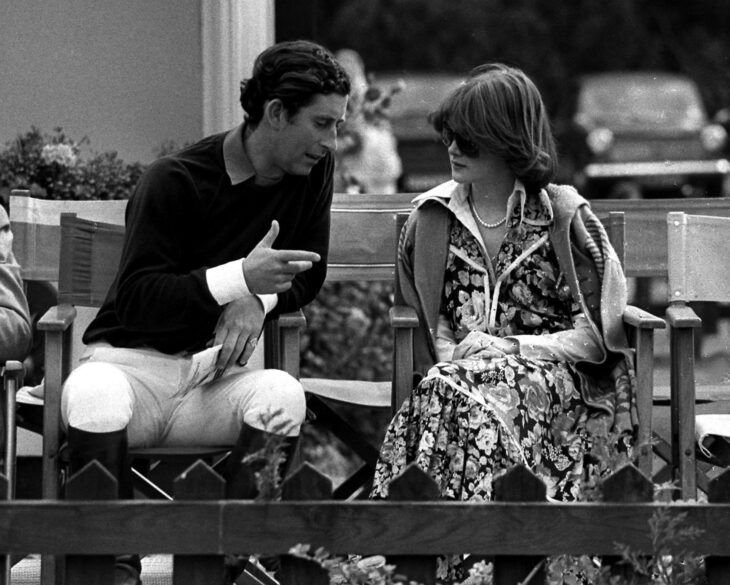 For his 18th birthday, this portrait of Prince Charles was commissioned. He’s wearing the Balmoral tartan in the picture, but it’s hard to see because he’s standing behind a big red chair. This would have been when Charles was in his last year at the boarding school Gordonstoun and then it was off to university. 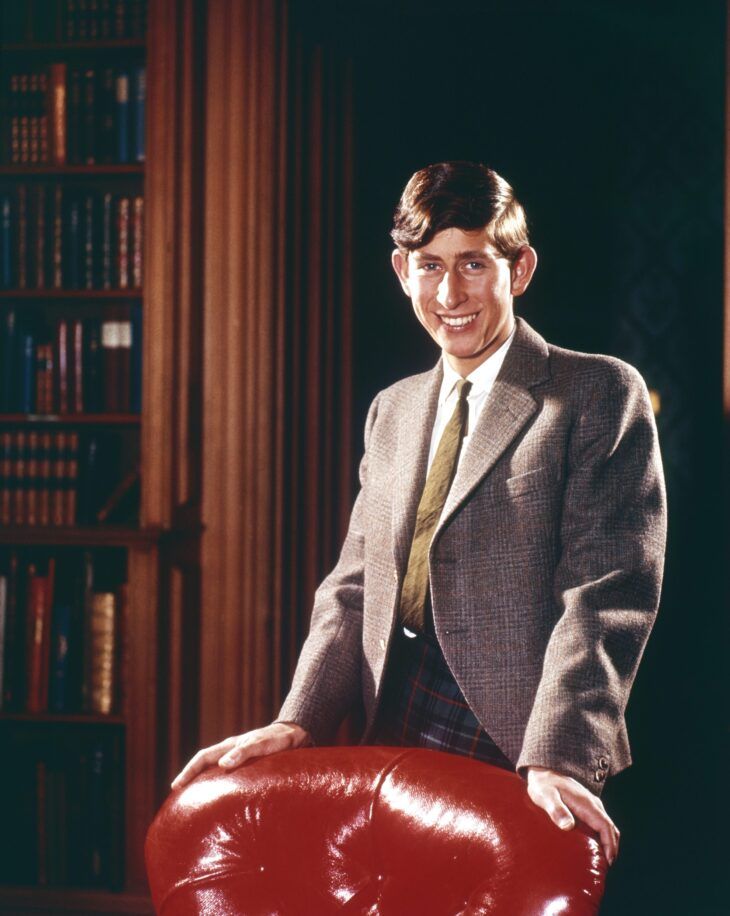 5. Prince Charles Gets His “Wings”

In 1971, the Prince of Wales received his pilot’s wings from Air Chief Marshal Sir Denis Spotswood at Royal Air Force (RAF) College in Cranwell, Lincolnshire and thus began his career in the RAF and the Royal Navy. He served in both until 1976. 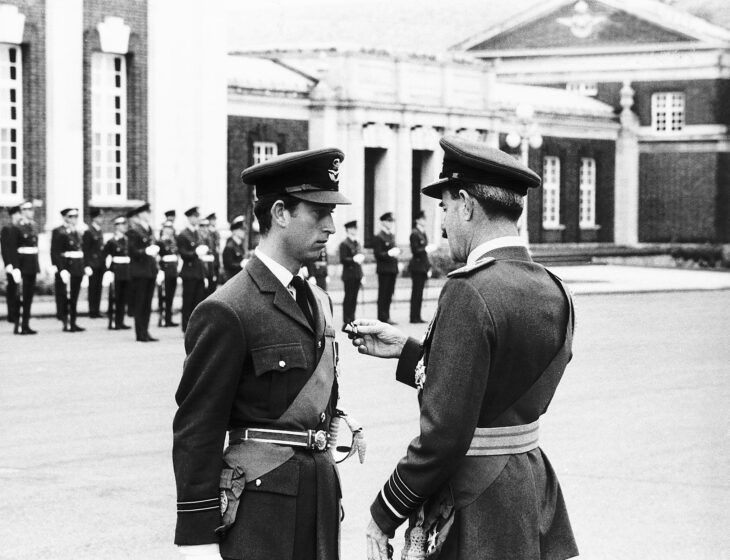 This would have been taken around the time that Prince Charles first attended Trinity College, Cambridge, or when he finished his education at the Scottish boarding school, Gordonstoun, as he graduated from there in 1967, which is when this picture was taken. 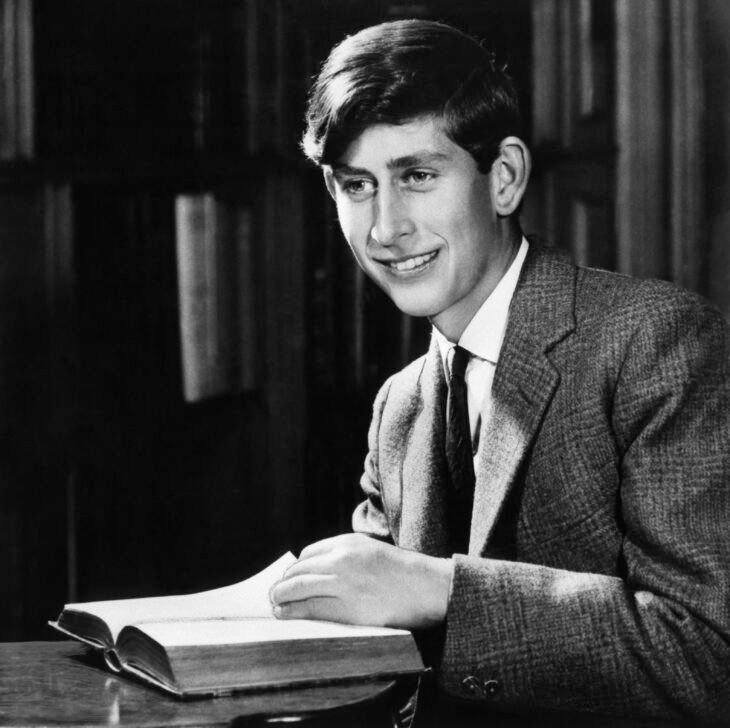 3. With the Royal Regiment of Wales

This photo is from June 1969. Prince Charles is wearing a uniform of the newly formed Royal Regiment of Wales. He was appointed Colonel-in-Chief of the new regiment earlier that year and it was his first military appointment. He looks so young and fresh-faced here! At the time, he would have been just 21. 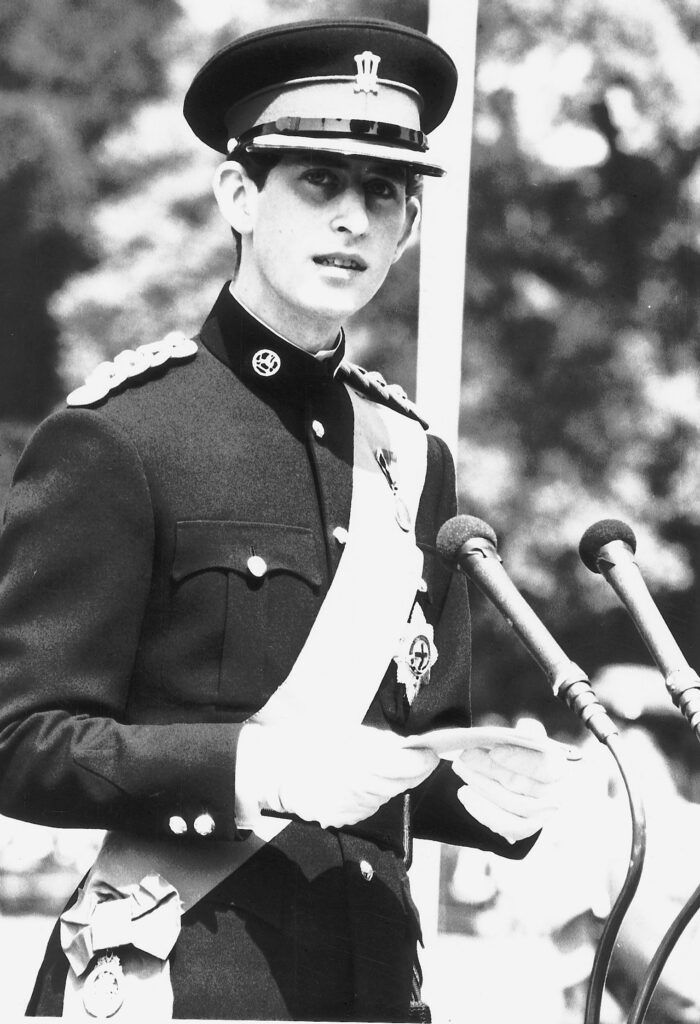 2. With the Prime Minister of England 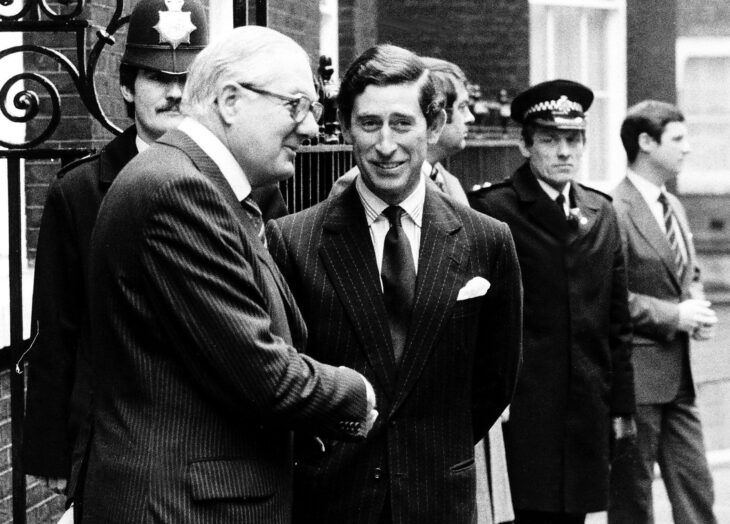 1. At the Controls of an Aircraft

This picture is from November 1969. Prince Charles is at the controls of an aircraft at Royal Air Force Oakington. He had yet to really begin his military career at this point, as he was still a student at Trinity College, Cambridge. 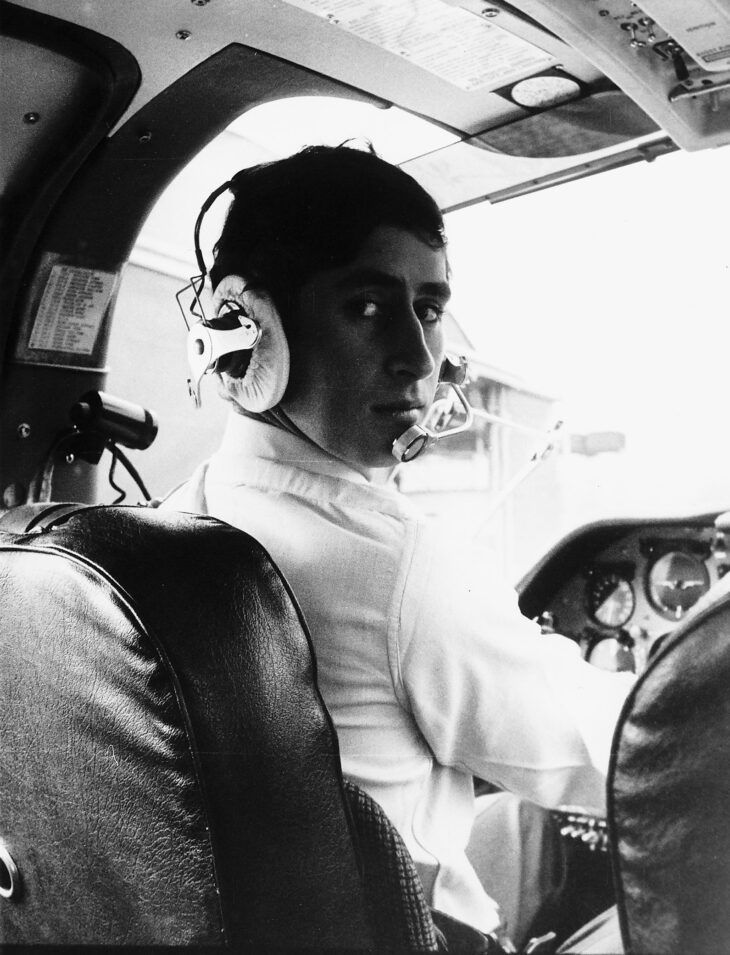