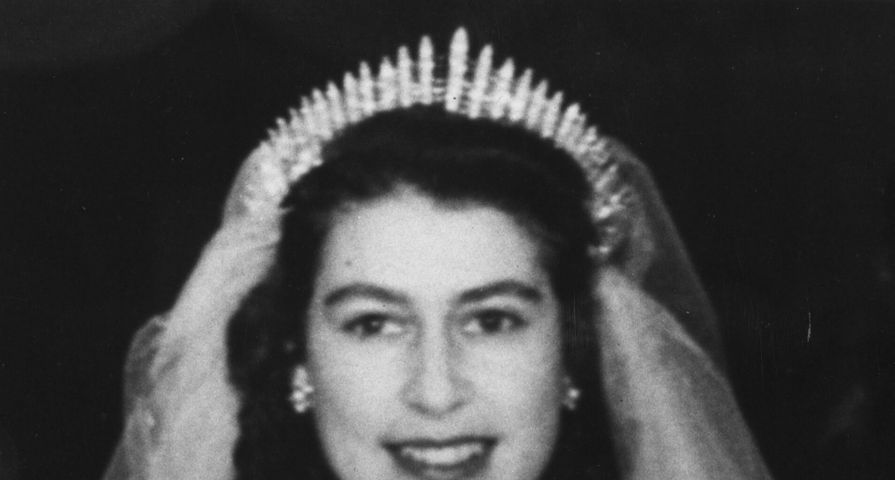 Over 70 years ago in November of 1947, Queen Elizabeth stepped out to marry Prince Philip Mountbatten, Duke of Edinburgh at Westminister Abbey. Their royal wedding held a bigger significance than just the uniting of two people, but also served as a movement forward and a moment of hope for the public following World War II. The British government was still in recovery and the joy and promise of the royal wedding brought feelings of a new start to the British people. Designer Norman Hartnell took on the role of creating the lavish gown and vowed to make it “the most beautiful gown he ever made.” For more information about the iconic gown, follow along for 15 hidden details on Queen Elizabeth’s royal wedding dress:

15. She didn’t try on the dress until the morning of the wedding

Surprisingly Queen Elizabeth didn’t try on her finished wedding dress until the morning of her wedding, according to The Telegraph! It was a wedding tradition that trying on the dress before the wedding was bad luck and Elizabeth chose to respect the tradition. Allegedly Princess Elizabeth was highly nervous in the morning prior to the wedding that the dress wouldn’t fit. Miss Yvonne, vendeuse to the Queen and the two Princesses, was sent to the Palace in the morning to help fit the gown and confirm the final touches. 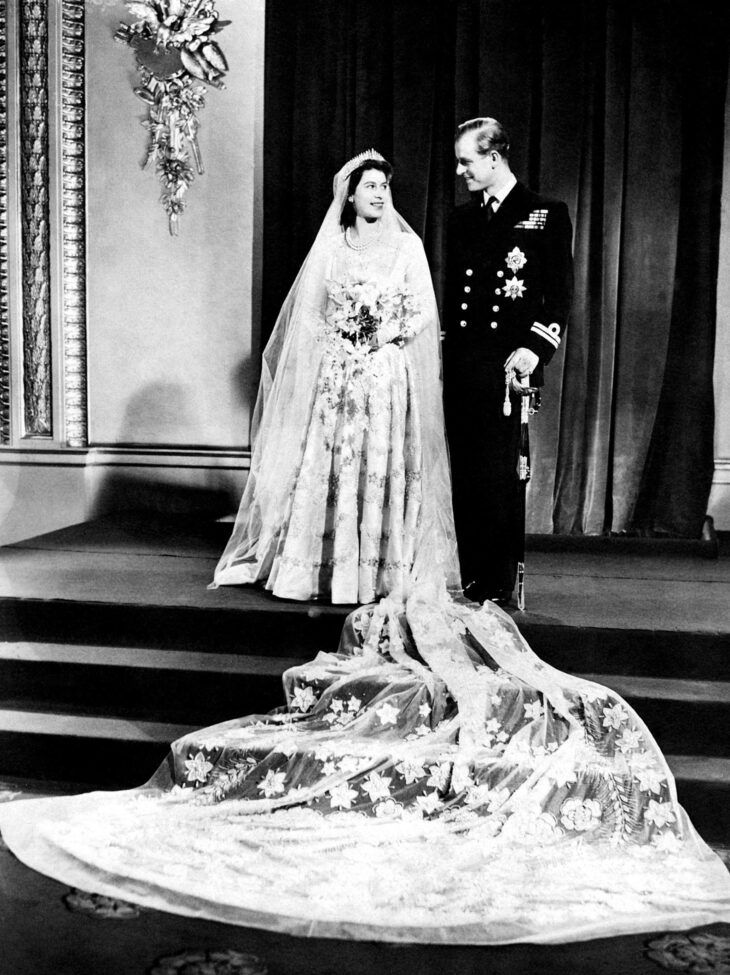 It definitely took more than a handful of women to design Queen Elizabeth’s iconic gown! According to The Telegraph, the garment and train took a total of 350 women working in secrecy. Norman Hartnell was the Court dressmaker and mastermind behind the design, which he entrusted to the workroom of Germaine Davide. According to The Telegraph, Germaine Davide, referred to as “Mam’selle” by her team, was wary in trusting a group of young girls around the age of 18 to work on the monumental gown, but she eventually caved as long as they behaved and worked hard.

13. She used coupons to pay for it

Even the Royals weren’t spared when it came to finances during the depression following World War II! At the time of the wedding wartime rationing was still in place for everyone, the royal family included! Allegedly Queen Elizabeth saved up her coupons in order to afford the dress of her dreams. Luckily, the government made an exception for the wedding and granted Elizabeth with 200 extra clothing coupons in addition to the ones she saved to purchase the material she needed for the gown. 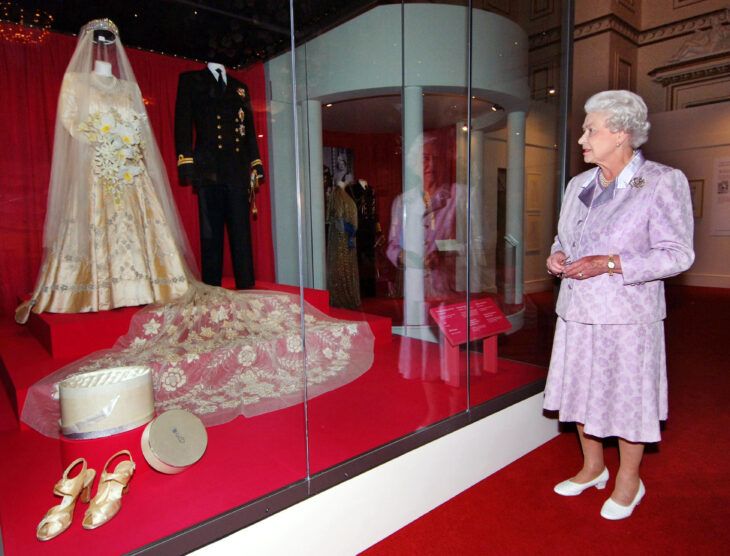 12. It took six months to make

The dress took the women a total of six months to make! One of the workers, newbie seamstress Betty Foster who was only 18 at the time, claimed that it was a professional understanding that you never spoke outside of work about the projects you were working on. This meant that for six months the group of seamstresses was bound to secrecy, even when it came to something as sensational as the future Queen’s wedding dress! 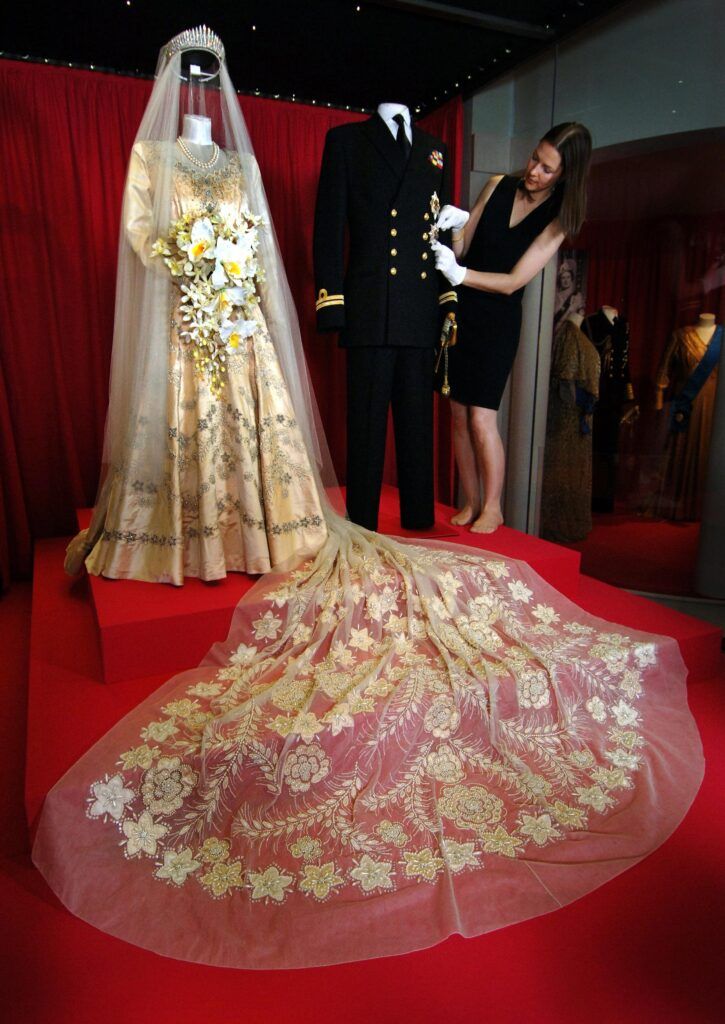 11. The embroidery was inspired by a painting

Many designers search for inspiration before designing a gown, and even more so for a gown as important as Queen Elizabeth’s wedding dress! When crafting the masterpiece, designer Hartwell supposedly took inspiration from Botticelli’s Renaissance masterpiece Primavera. The gown signified a new world following the war and Hartwell wanted the gown to symbolize motifs of rebirth, renewal, and growth. He crafted patterns using gold and silver thread of wheat, roses, and star-shaped flowers to mimic the designs in the painting. 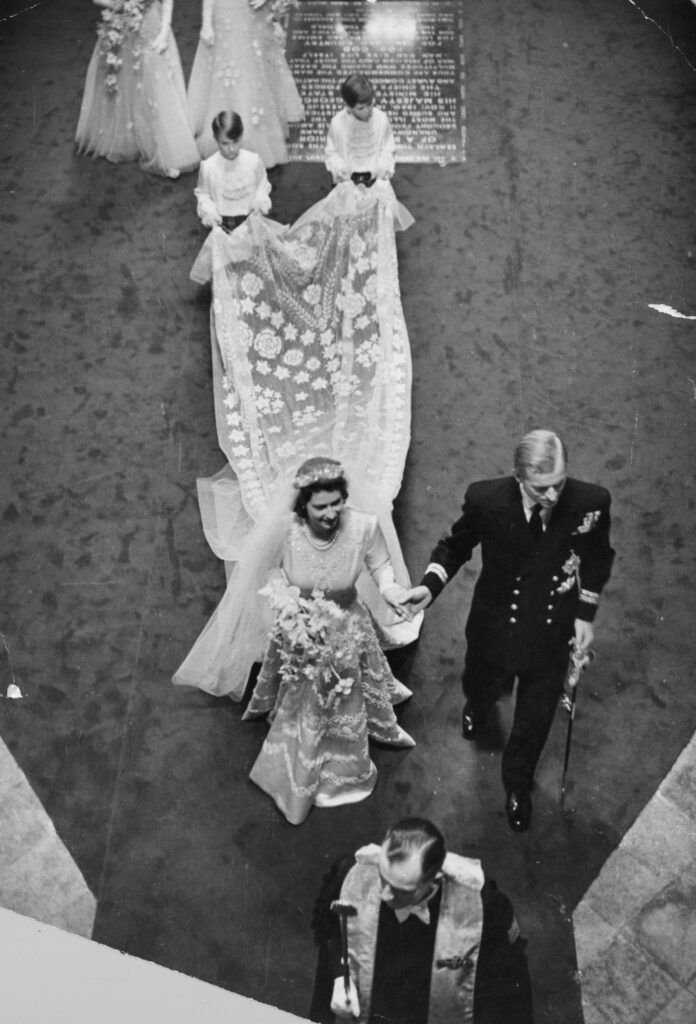 Many of the beading used on the dress came from Britain, but Hartnell had the pearls imported from the United States. The gown was encrusted with surprisingly over 10,000 seed pearls in addition to sequins and crystals. The hard work and attention to detail definitely paid off by the looks of the intricate floral and star design encrusting the gown! 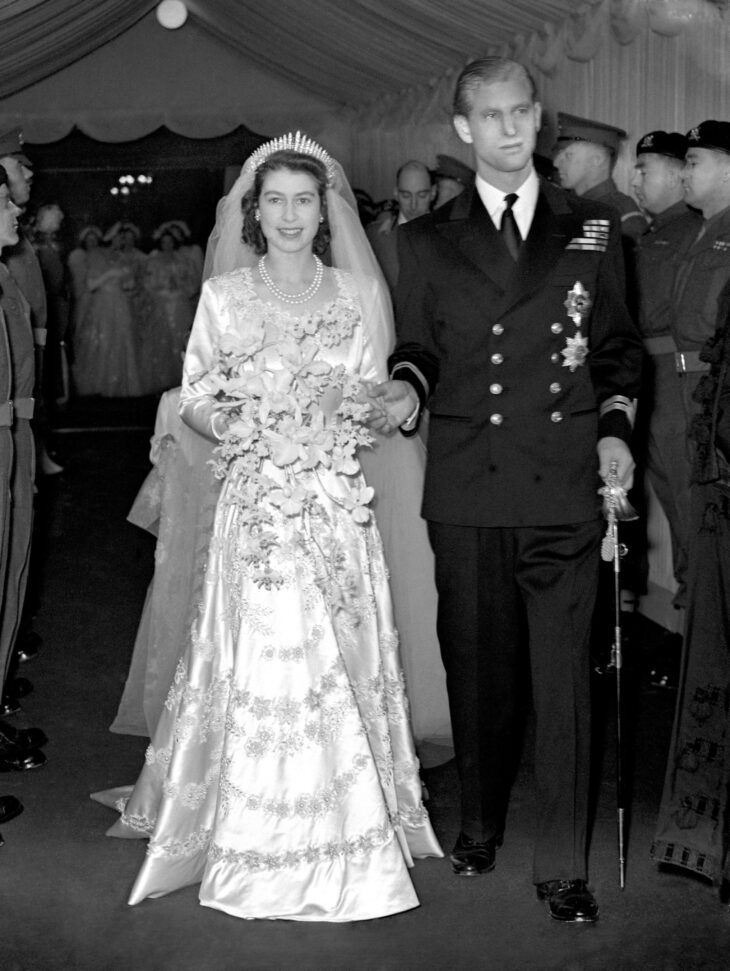 9. The silk was imported from China

Rather than collaborating with recent foes Italy or Japan, Hartnell opted to work with Nationalist China to supply the silkworms for the fabric on the gown rather than the “enemy silkworms” as they were referred to as at the time. The silk used on the dress was rich and an ivory tone, whereas the silk chosen for the train was more flexible. 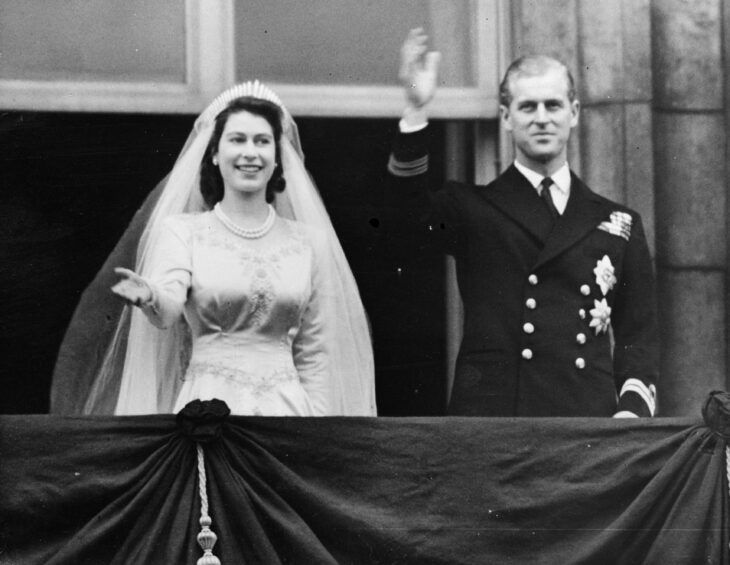 Despite the best of intentions and careful selection involved in choosing the silk, it was later confirmed to be a poor selection. Thirty years following the wedding, the curator at the London Museum observed when the dress was on display that the fabric had deteriorated and didn’t age well. Additionally, it was noted that “weight of the embroidery dragged the skirt down, increasing the strain on the weave.”

Train length is a huge factor to consider when designing a royal wedding dress! With millions watching in anticipation for the moment the bride steps out, it’s important that she makes an entrance that will take everyone’s breath away. Hartnell definitely achieved just that with his star-patterned gown which stretched 15 feet down the aisle behind her. Although it seemed extravagant at the time, Princess Diana later stepped down the aisle wearing a train of a whopping 25 feet! 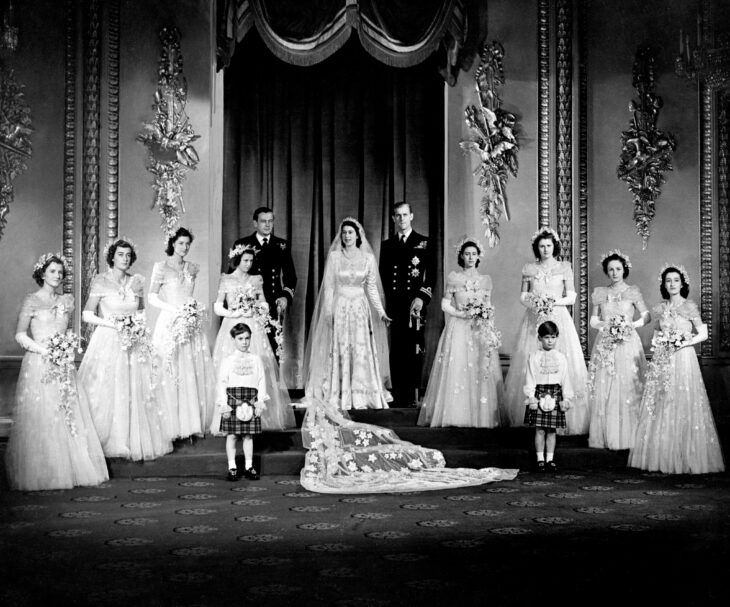 6. Tiara was gifted to her as a wedding present from her grandmother

It’s a royal tradition to wear a family heirloom on the day of the wedding and Queen Elizabeth followed suit by wearing her grandmother’s diamond fringe tiara. The tiara had been made for her grandmother Queen Mary in 1919 and used stones from a Collingwood tiara that was given to Mary as a wedding present by Queen Victoria. Queen Mary also wore the tiara on her own wedding day in 1893. 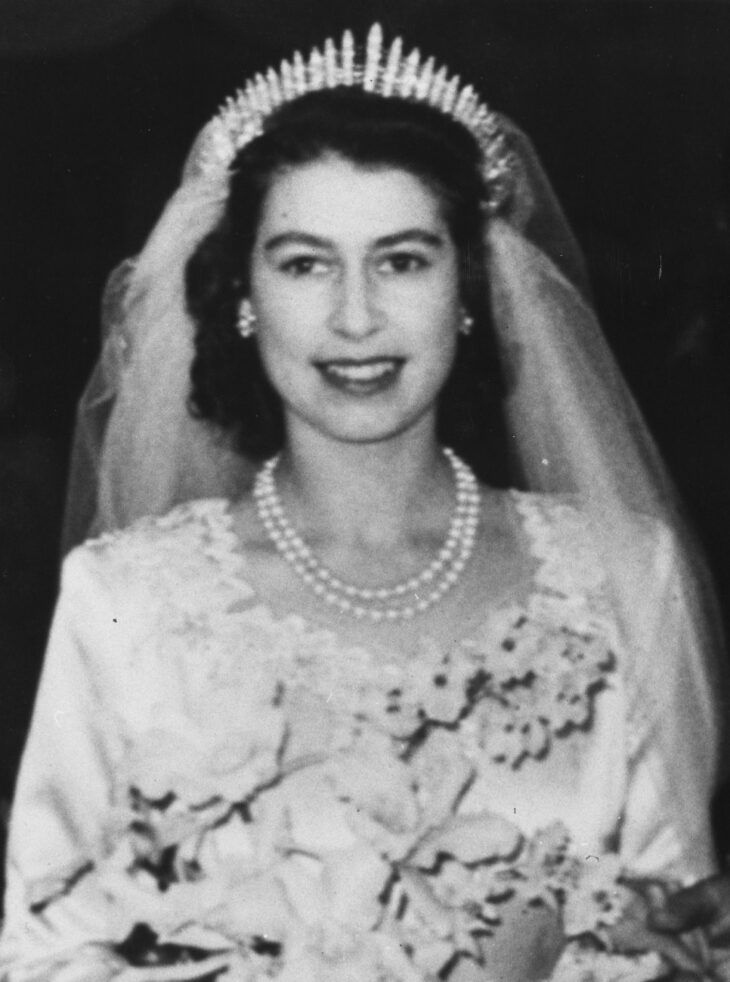 5. Her tiara broke the morning of the wedding

Even the royals fall victim to a mishap or two on their wedding day! The morning of the wedding, Queen Mary’s fringe tiara actually snapped just before Elizabeth left for Westminster Abbey. Luckily, a jeweler fixed it as quickly as he could; however, in certain photos a noticeable gap is evident near the center of the tiara. 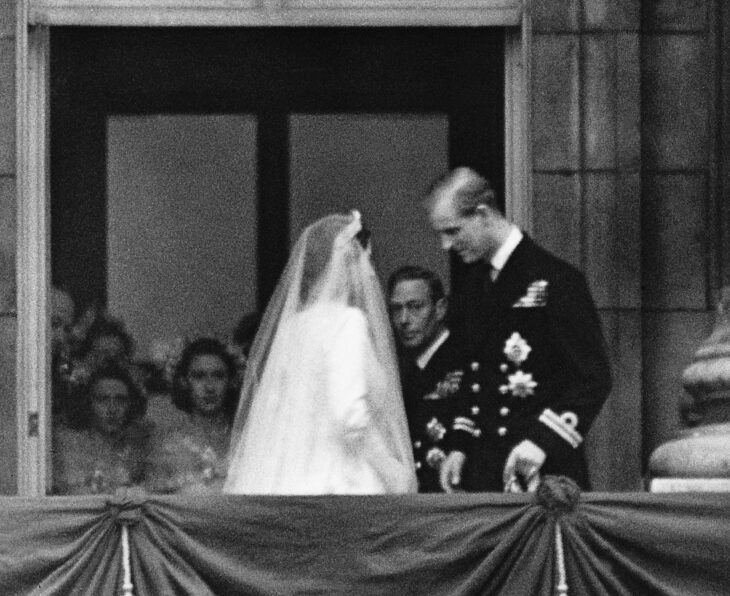 Florist Martin Longman was in charge of the bouquets for the royal wedding and he allegedly submitted five designs, but his arrangement of three all-white orchids was the chosen style for the big day. To add a touch of sentimental value, the orchid design also included myrtle which was grown from the same myrtle in Princess Victoria’s wedding bouquet. The floral design was undeniably stunning, but when the Royals went to go take the official portrait following the ceremony, the bouquet seemed to have vanished. A week later, Longman was later asked to make an identical bouquet so the bride and groom could be rephotographed. 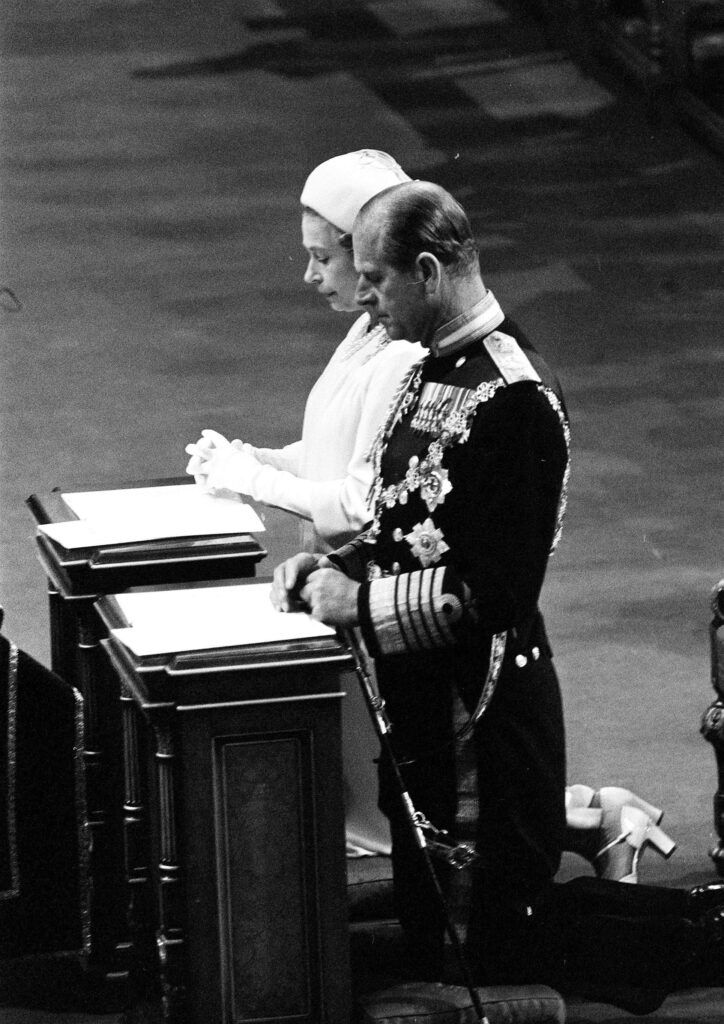 3. There was a secret lucky shamrock design

The Queen was completely unaware of this detail, but Hartnell later enclosed that he added an extra lucky shamrock onto the skirt! The good luck four-leaf clover was sewn onto the left side of the skirt, “so that Her Majesty’s hand could rest upon it during the ceremony,” Hartnell shared of the sentimental detail. 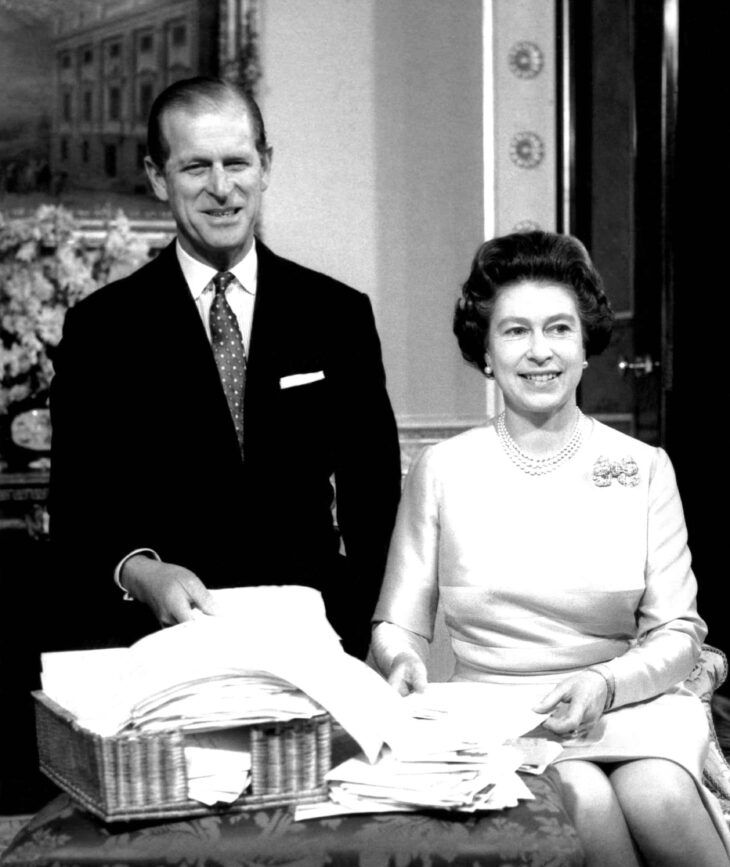 2. The heels were studded with pearls

Hartnell also designed the satin sandals that the bride wore during the big day! He designed the open-toe sandals with silver buckles along the ankle which were studded with small pearls to compliment the pearl-encrusted dress. Although Hartnell designed the heel, craftsman Rayne was left in charge of crafting them. The 1947 fashion moment was the beginning of Rayne’s golden era of fashion and he was later asked to design pieces for many royals including Princess Margaret and Princess Diana.

1. Netflix’s The Crown made an exact replica

Netflix original The Crown designed an exact replica of the iconic gown for Claire Foy to wear as she took on the role of Elizabeth! The gown appears in the premiere episode and roughly cost $37,000 to replicate. Actress Claire Foy dished the details of what it was like to wear a gown of this stature. “It took five days to shoot that scene, and the dress, an exact replica, weighed a ton. All the fiddling to get it right, and needing the loo and you’ve got a crown on your head. For this young woman to be wearing all that and then have the composure to walk through the Abbey full of dignitaries and heads of state, and then having to be anointed… It must have taken huge gumption. ” 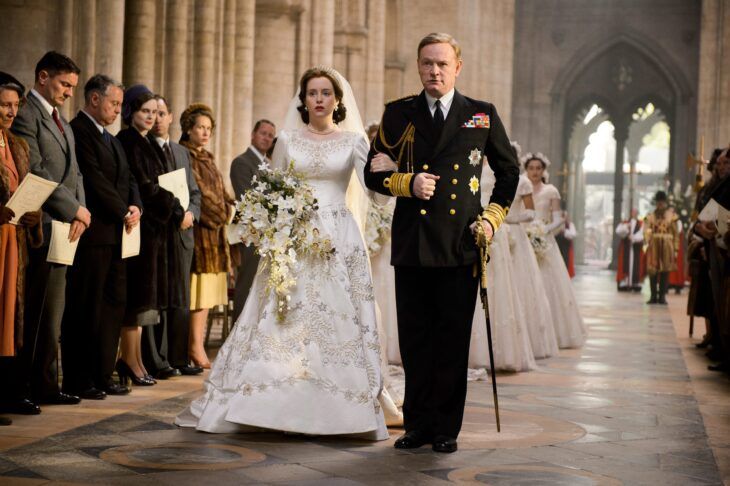