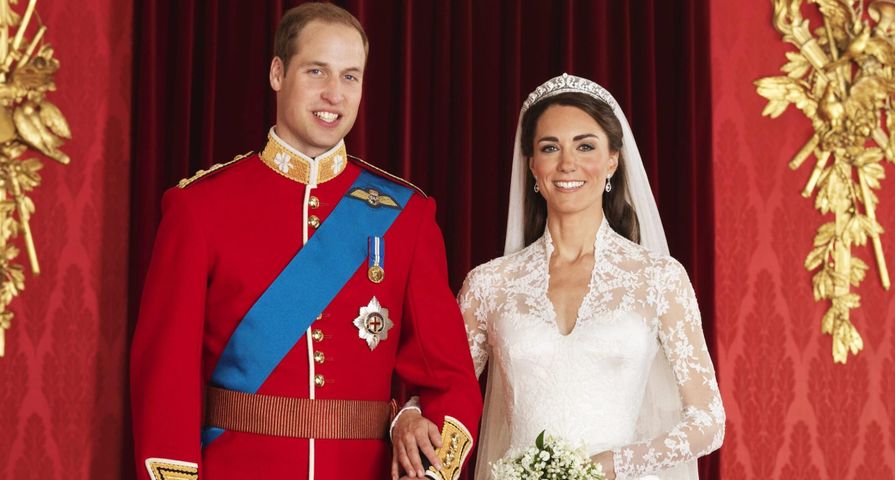 Kate Middleton’s highly polished sense of style has inspired and guided aspiring fashionistas ever since she was first spotted on the arm of Prince William! On the day of her wedding back on April 29, 2011, the soon-to-be Duchess of Cambridge stepped out wearing one of the most iconic and highly anticipated wedding dresses known to date. The dress and its designer Sarah Burton were kept top secret for months leading up to the event and were not officially announced until just prior to the service when Kate stepped out of her car to enter Westminster Abbey. The dress took months to make under highly confidential conditions, which means there are quite a few hidden details about the intricate design you probably didn’t know. Follow along for 12 hidden details you likely didn’t know about Kate Middleton’s iconic wedding dress:

12. The lace was highly intricate and strategic in its creation

The lace appliques on her McQueen design were handmade by the Royal School of Needlework and they used a design called Carrickmacross that began in Ireland in the 1920s. The employees who worked on the lace were mandated to wash their hands every 30 minutes to ensure the lace was pure white when Kate walked down the aisle. The flowers of the lace were also specifically chosen and were actual flowers including roses, thistle, daffodils, and shamrocks. 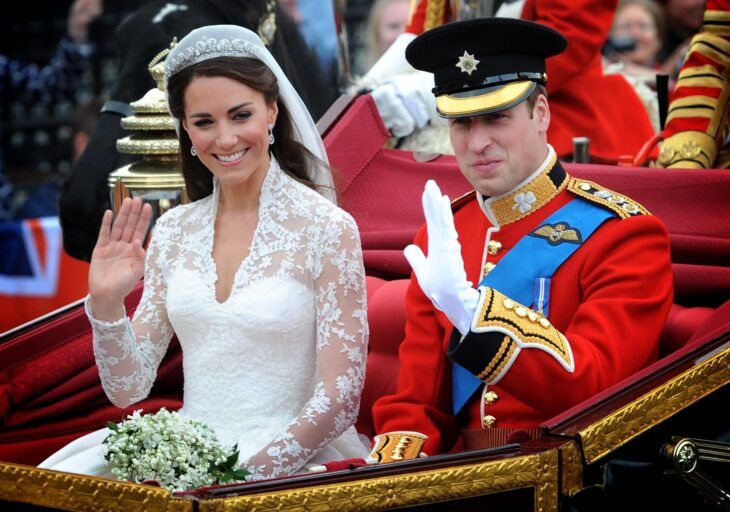 11. Designer Sarah Burton was sworn to secrecy under a confidentiality agreement

Sarah Burton, the creative director who took over Alexander McQueen, was the leading force behind the Kate Middleton dress design and was required to sign a confidentiality agreement from Buckingham Palace. She was sworn to secrecy and denied any allegations that she was the designer right up until the moment Kate stepped out of her hotel on the way to Westminster Abbey. The secret project was so closely guarded that even Burton’s parents were unaware of her involvement in the creation. “Because my core team knew, it was okay for me to disappear and come back, then disappear again,” she explained in an interview with Vogue. “But I remember other people asking me, ‘Are you coming in on Friday?’ and I’d say, ‘Oh, yeah, see you in the morning.’ I’d be scheduling meetings knowing full well I wasn’t going to be there for them.” 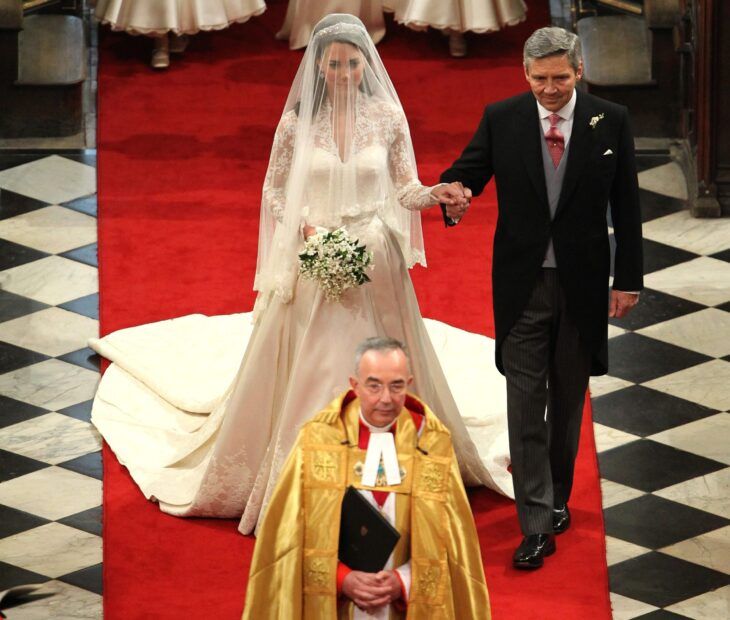 10. The underskirt was designed to resemble a flower

Burton took the all the stops while designing the dress and was aware that her wedding creation would dictate the bridal trends going forward for years to come. Despite the underskirt being covered for the majority of the time that Kate would spend in the dress, Burton still paid attention to detail when designing it. The bottom of the dress was designed to resemble the opening of a flower. When Pippa Middleton lifted her sister’s train, wedding goers were able to see a glimpse of the lace-trimmed silk tulle the gave the gown the Cinderella-shape near the bottom. Burton definitely did not skimp on the detail in any aspect of the intricate design! 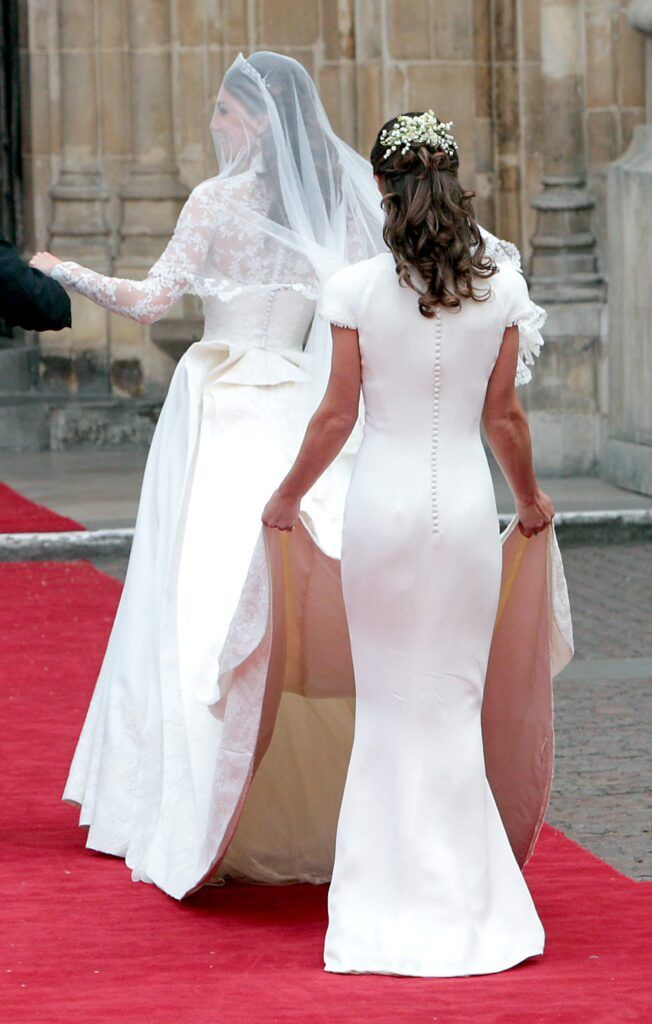 9. The Queen passed down the tiara

It would be impossible to have a royal wedding without a legendary family heirloom making an appearance! Kate followed the “something borrowed” tradition and wore a Cartier halo tiara that the Queen provided for her to wear on her wedding day. The Queen was given the tiara on her 18th birthday, but it was originally purchased by her father King George VI as a gift for his wife. The dainty headpiece consists of 19 diamond arches with pearls dangling beneath them as well as lovers’ knot bows throughout. Middleton also ensured her veil was simple, romantic and with minimal embellishment to allow her vintage Cartier tiara to steal the show. 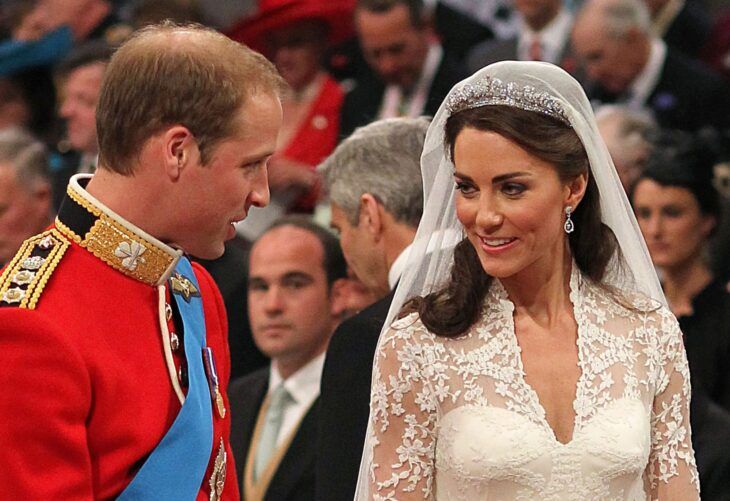 8. The sleeves were inspired by previous royals

Kate Middleton’s timeless dress definitely generated comparisons to previous royals and public figures who donned similar styles in decades past. The lace collar and long sleeves was not an original concept, but the V-neck design and dainty configuration definitely made it unique. Fashion critics compared the dress to that of the dominant bridal trends of the ’50s as well as Grace Kelly’s iconic wedding gown and the Queen’s own style. An official statement was released following the dresses reveal which stated that Kate wished to “combine tradition and modernity with the artistic vision that characterizes Alexander McQueen’s work.” 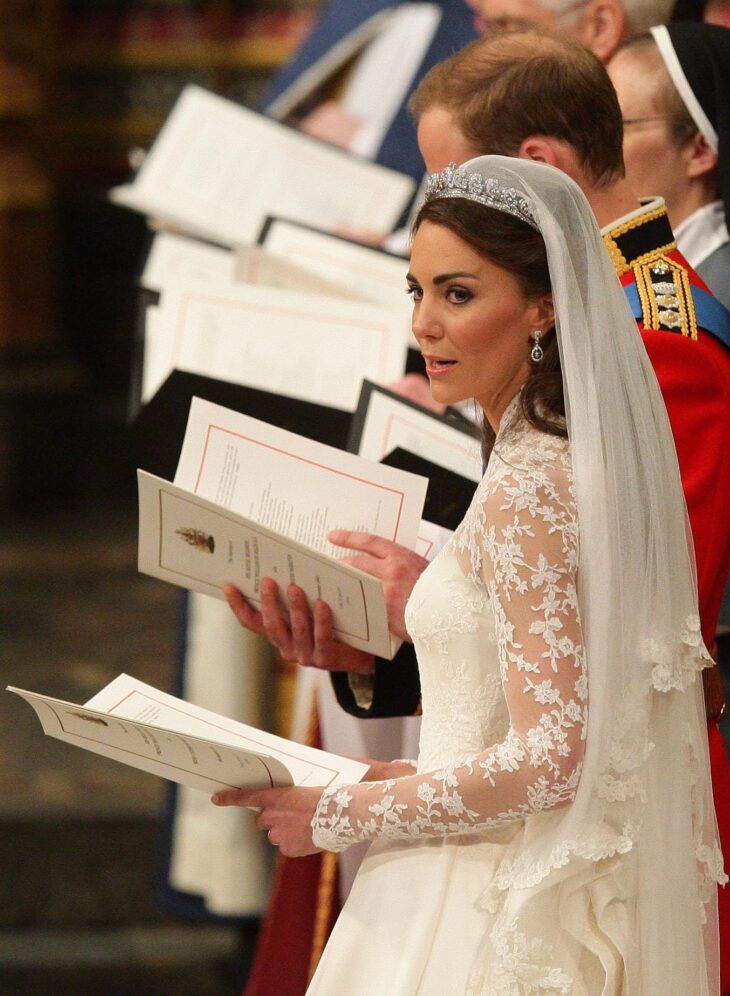 Following the big reveal on the day of the royal wedding, the dress was transferred and put on display at Buckingham Palace. Although many replicas of the dress were created, the original worn by Middleton herself was definitely worthy of a spectacle. The dress was on display from July 23, 2011, to October 3, 2011, during the annual summer exhibition. According to reports, by the end of the summer, the Sarah Burton /McQueen creation helped to raise 8 million pounds, most of which was donated to Kate Middleton’s own charity fund. 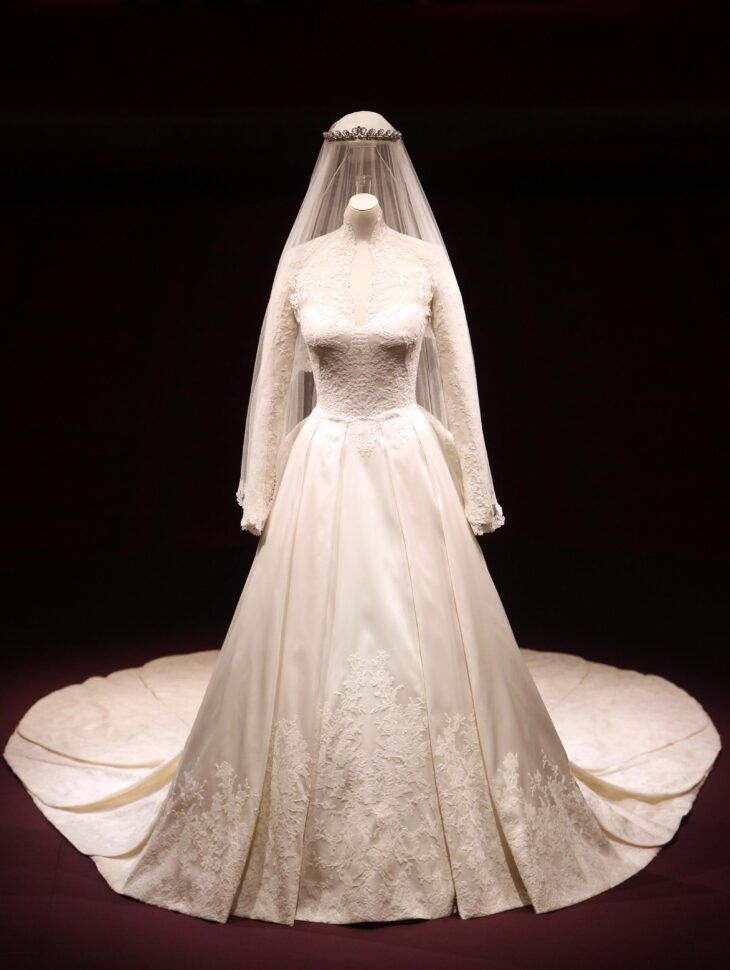 6. The gown combined both white and ivory

Although Kate’s dress was highly conventional in many aspects, the design also broke tradition by featuring more than one color. Typically, brides stick to either white or ivory but this fashionista opted for both when designing the gown alongside Burton! The dress was made of satin gazar, which is a smooth and stiff fabric, in both layers of ivory and white! Despite her progressive color preferences, she did stick to one good luck charm when it came to color and allowed Burton to sew a blue ribbon on the inside of the gown as her “something blue.” 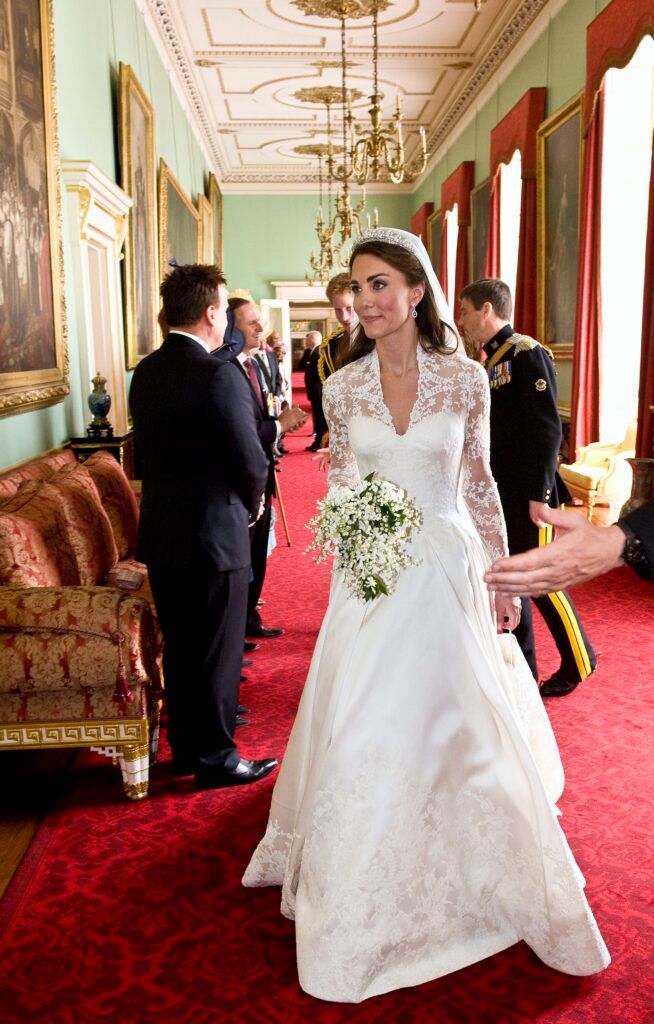 5. The hips were padded

Alexander McQueen is known for his dramatic Victorian-inspired designs and for his tendency to use waist-cinching corset styles to make the waist appear as small as possible. If you thought that Middleton looked a little curvier than usual as she walked down the aisle, your instinct was correct! The silhouette of the gown featured padding at the hips as a tribute to McQueen’s traditional Victorian corsetry and to make her waist appear even tinier. The back of the dress also featured 58 gazar and organza covered buttons that ran up her back which created even more of a figure-slimming and flattering shape. 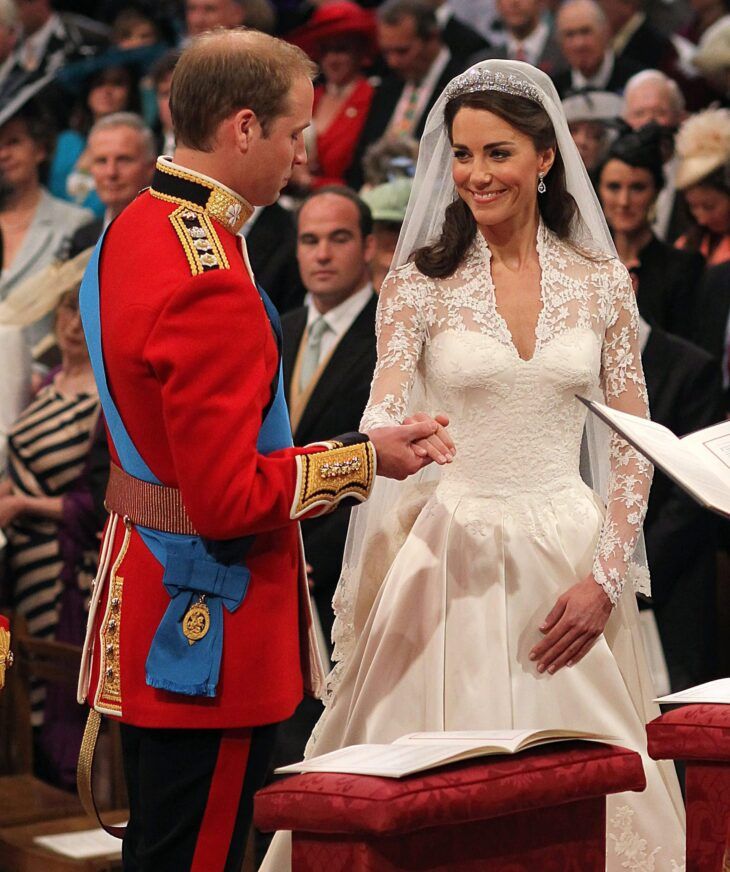 4. The earrings came from her parents

Kate also paid tribute to her own family legacy upon the day of her wedding! Prior to the ceremony, her parents gifted her custom Robinson Pelham dangling earrings that echoed Middleton’s family crest by featuring the acorn and leaf motifs. Kate’s mother Carole and father Michael gave their daughter the diamond set of earrings as a wedding gift. The style stayed consistent in matching with her heirloom tiara and also followed an all-British tradition by being made by a UK craftsmen. 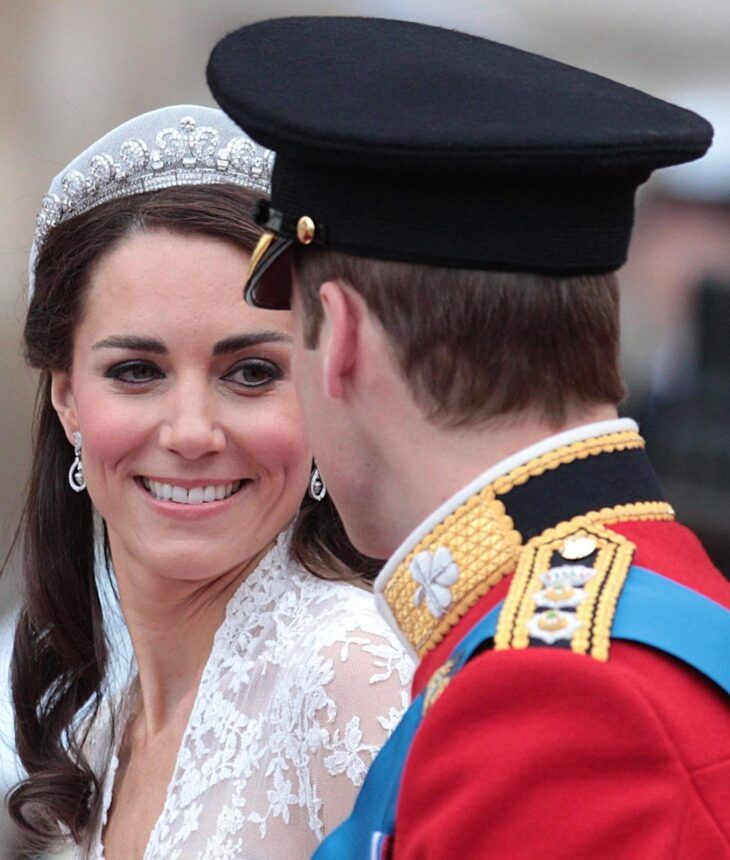 Princess Diana made jaws drop all around the world when she walked down the aisle in 1981 wearing a 25-foot long wedding dress train that cascaded for miles behind her. For years following this royal wedding, inspired brides took on the trend and opted for a long train of their own on their Cinderella day which is why many assumed Kate Middleton would follow suit and opt for a long train! She did have a train, but it was only 9 feet long rather than the whopping 25 feet that Diana’s was. The train was undeniably elegant as it glided behind her down the aisle, but it didn’t break any records. 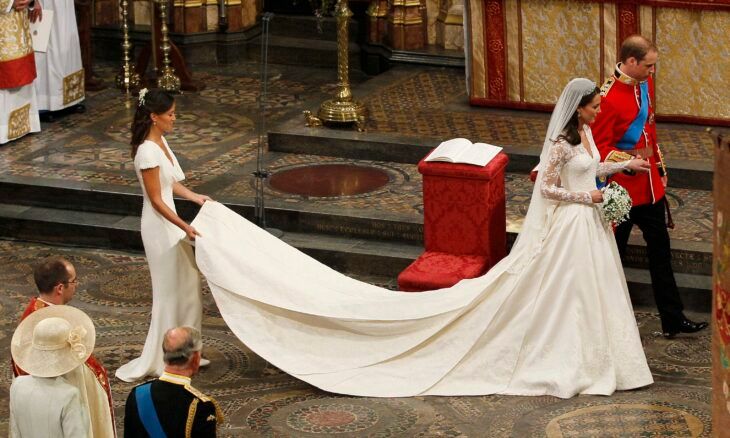 2. She debuted another McQueen creation at her reception

Although months of time and effort were put into the ceremony dress that Middleton donned, the 9-foot long design, unfortunately, wasn’t the most practical option to bring her through to the reception. Instead, Middleton opted for another McQueen design that featured a smooth satin material, sequined belted waist, and a flattering sweetheart neckline. She added a touch of visual interest by pairing the dress with a fuzzy quarter length shrug to cover her shoulders. She also changed up her hairstyle and opted for voluminous curls instead of her half-up style from earlier in the day.

Although no one can know for certain aside from the Duchess herself how much the astonishing dress cost, word leaked that the dress cost a whopping $434,000 to create! The royal wedding between Kate and William was definitely one of the most expensive of all time, reportedly costing $34 million, but the dress itself definitely played a role in the high cost. Although this seems like quite the hefty price tag for a wedding, in comparison, Lady Diana and Charles wedding cost close to $70 million in today’s dollars. 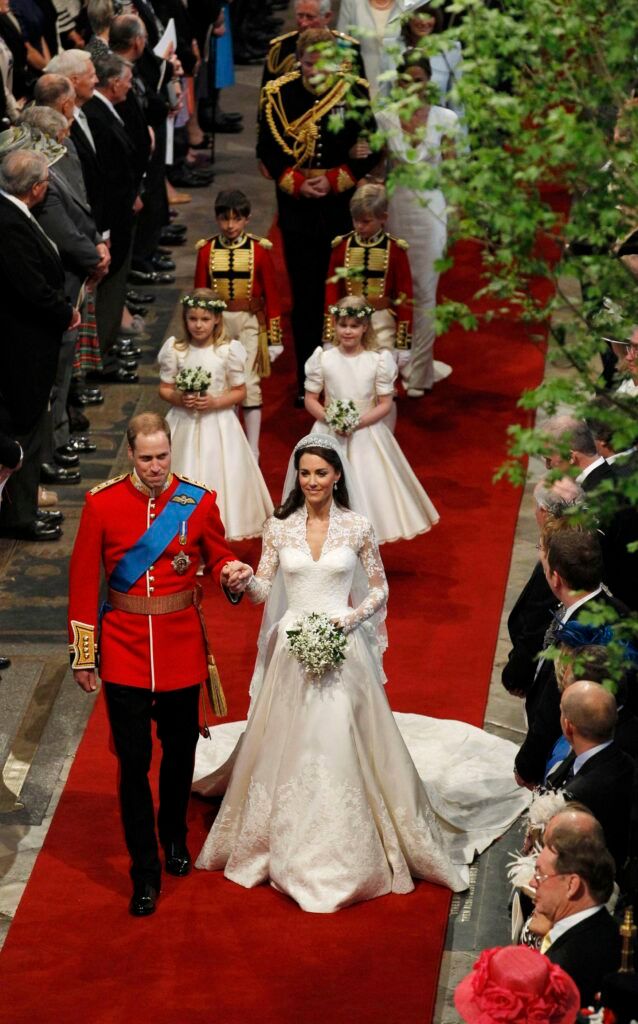