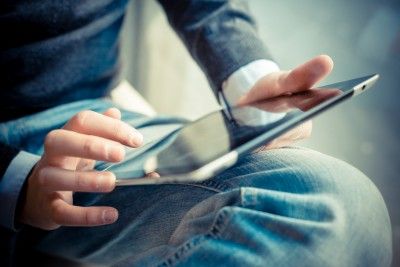 Reaching for a lightweight tablet computer can save time and energy, but using a tablet to type may not be great for your shoulder muscles, according to a new study from Northern Illinois University.

The study, which examined 19 people (ten men and nine women) in their mid-twenties, asked participants to type passages from Grimm’s Fairy Tales for five minutes. The process was performed on a touchscreen (like a tablet computer screen) and then on a somewhat more traditional notebook keyboard. Electrodes then recorded muscle activity in the subjects’ forearms and shoulders, while a force platform placed underneath the keyboards measured keystroke impact.

Perhaps most important, the study showed that muscle activity in the trapezius muscles — which support the shoulders and arms — was more intense when participants used the touchscreen keyboard. The researchers behind the study said that, over time, this could present significant muscle discomfort and strain in the shoulders. It’s believed that people ‘float’ their hands and forearms more when typing on a virtual keyboard, causing the trapezius muscles to work harder.

The study, which was partially funded by major computer manufacturer Hewlett-Packard, can be read in detail in the November 2014 issue of Applied Ergonomics.