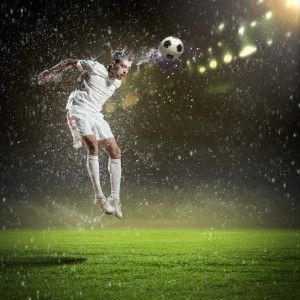 When North Americans hear the word “concussion”, we often think of two very physical sports: football and hockey. But researchers insist that soccer players also sustain too many brain-related injuries, and are insisting that significant changes be made to the sport.

Researchers at Toronto’s St. Michael’s Hospital recently examined a series of studies examining head injuries sustained by both amateur and professional soccer players. They found that concussions accounted for almost one in ten injuries sustained during matches.

St. Michael’s director of neuroscience research Tom Schweizer admits he was stunned by the finding. “Just the incidence of concussions in soccer, I found quite striking,” Schweizer said. “We don’t really associate concussions, head injury, with this game as much obviously as we do with hockey and football.”

The St. Michael’s researchers also found that an astounding 63 per cent of all varsity soccer players had experienced symptoms associated with a mild or serious concussion over the course of their playing careers.

Many of the soccer-related concussions occurred because a player’s head struck another player’s head, elbow, arm or hand. Many soccer concussions take place when two players engage in a “heading duel,” meaning they both attempt to head the ball but end up striking each other.

The St. Michael’s team also says female soccer players are more at-risk than their male counterparts. “Some have speculated that it could be smaller neck muscles in female players that don’t allow them to brace fully for the impact,” noted Schweizer.

Finally, when it comes to position, goalkeepers are in the most danger of sustaining a concussion — probably because so many players mingle about the goal area during a corner kick.

“As a goalkeeper myself, it’s a situation where you’re quite literally throwing yourself at other players’ feet,” noted University of Toronto soccer player Monica Maher. “So you’re kind of at risk for being kicked in the head or (getting) a ball to the head, even in some cases the goalpost.”

Schweizer says the studies show major changes need to be made, particularly when it comes to youth soccer. He suggests discouraging young players from heading and placing padding on goal posts.