Popular Painkillers May Protect You From Skin Cancer 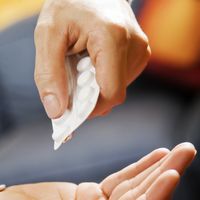 A study hailing from Denmark has found that common painkillers may actually protect you from skin cancer.

The findings showed that those who regularly took non-steroidal anti-inflammatory drugs (or NSAIDs) like Aspirin, ibuprofen, and naproxen were less likely to develop certain types of skin cancer—compared to those who seldom took the over-the-counter medications.

The study examined the medical records of more than 18,000 participants from Denmark who had been diagnosed with skin cancer between 1991 and 2009. After their case histories and medication use were compared to a control group of non-cancer patients, it was revealed that the painkillers acted as partial shields, reducing squamous cell carcinoma by 15-percent and melanoma (the most deadly form of skin cancer) by 13 percent.

Lead Researcher, Sigrun Alba Johannesdottir of Aarhus University Hospital, suspects that the anti-cancer properties of NSAIDs originate from their capacity to decrease the activity of COX enzymes, which encourage inflammation.

While Johannesdottir hopes the study will shed new light on the development and prevention of skin cancer, taking NSAIDs too often (i.e., Aspirin abuse) can cause gastrointestinal hemorrhage, other bleeding disorders, and even hemorrhagic stroke.

Source: The Globe and Mail