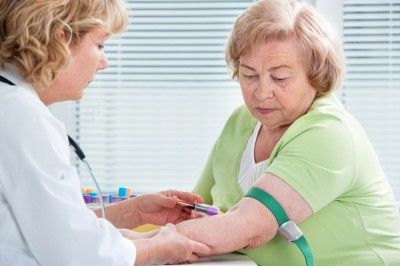 Researchers say they’ve developed a new blood test that will allow them to detect the early onset of Alzheimer’s disease.

That’s the finding of scientists based at Georgetown University in Washington, D.C. They based their research, which took place over a five-year period, on blood samples of more than five hundred people aged 70 or older.

The researchers, who recently published their findings in the journal Nature Medicine, say that early onset of Alzheimer’s can be detected by studying the levels of fat in the blood.

Specifically, the Georgetown scientists say they found differences in the levels of ten types of fat, or lipids, in the blood of people with early onset Alzheimer’s.

In fact, tests have shown that this process is 90 per cent accurate in determining whether or not Alzheimer’s will develop within three years’ time.

The Georgetown researchers say that more tests need to be completed, but insist that what they’ve discovered can be considered “a real step forward” for doctors and patients battling Alzheimer’s.

“I think there is a huge need for a test,” noted Howard Federoff, professor of neurology at Georgetown University Medical Center.

“But we must look at larger numbers of people before this could be used in clinical practice.”

Obviously, researchers believe that detecting Alzheimer’s disease early in its development will help in the treatment process. But it could also save money — right now it’s estimated the global cost of dementia could be as high as $600 billion, with the number rising all the time.

Currently, about 44 million people around the world suffer from some kind of dementia. It’s expected that number will multiply by three by mid century.